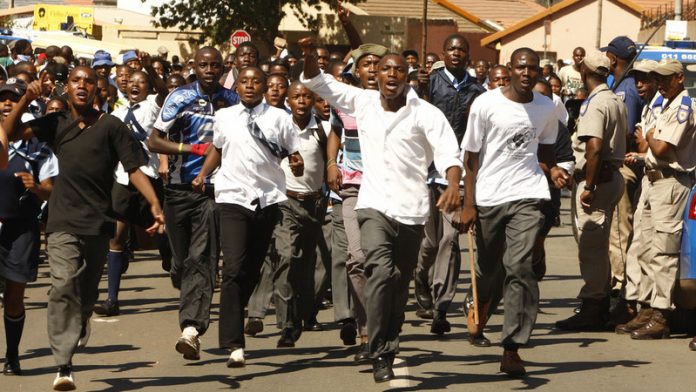 COMMENT
“The doors of learning and of culture shall be opened”, according to the Freedom Charter way back in 1955. In part it declared that “education shall be free, compulsory, universal and equal for all children”.

In those dark days of apartheid, not only was education segregated but access was also almost nonexistent for the majority — hence the insistence. The ANC broadened this declaration with a policy that education should be free up to tertiary level. This is where the current impasse of #FeesMustFall is at.

South Africa, like most African countries, has done well with providing free education up to grade 12. The battlefield is the university campuses where, unlike matric pupils, the government is expected to shoulder the additional parental responsibility of paying for accommodation and meals for students.

Whatever the problems and whatever the pitfalls associated with this “last great, glad adventure”, as Francis Carey Slater would put it, I hold the view that free tertiary education is affordable in South Africa. This is without necessarily increasing taxes. That great economist, John Keynes, would advise us that “nothing is required and nothing will avail except a little, a very little clear thinking”.

Let it be stated right up front that it will profit the country nothing to attempt to fiddle with the budget by robbing Peter to pay Paul. That will be tantamount to rearranging the furniture while the Titanic is sinking. What needs doing is a wholly new scheme of reamalgamation where the very foundations of our budget are overhauled.

At a macroeconomic level, we must ask and answer the question: Isn’t the cost of government disproportionally high? Do we really need all six spheres of government — the National Assembly, the National Council of Provinces, the provincial administrations, district municipalities, local municipalities and the institution of chieftainship? When the answer is in the negative, we must then question whether we need the remaining organs of state in their numbers, including all nine provinces.

The executive has to be examined. When Zuma’s administration came to power, there was a phenomenal increase in the number of ministers, each with their own personnel. Furthermore, their salaries ought to be benchmarked.

Another source of potential saving is the infrastructure the country has created for service delivery. In an African country, the expenditure we incurred for the building of 2010 stadiums, with huge profits, leaves much to be desired. That is why we must herald service delivery audits, which will trace each rand of the fiscus to its final destiny.

What of our state-owned entities? They have become gold mines to corrupt individuals. Chief executive officers are awarded hefty bonuses for incurring heavy losses. Their illogic is often that their entities are successful because they are loss-making.

Lastly, economics makes the difference between wealth creation and wealth inheritance. It should be established whether the broad-based black economic empowerment framework in its current form does not merely expropriate state resources into the hands of a select few.

Having accepted that these are some of the avenues from which billions of rands can be saved, students, too, will be patriotically bound to pledge their side of the bargain. Remember the greatest gift to our generation of students is the ability to change their lives by changing their attitudes.

Professor Mncedisi Jordan is a former staff member at the University of Fort Hare and Walter Sisulu University. He is now researching indigenous cultures.