The minimum wage and the moral economy 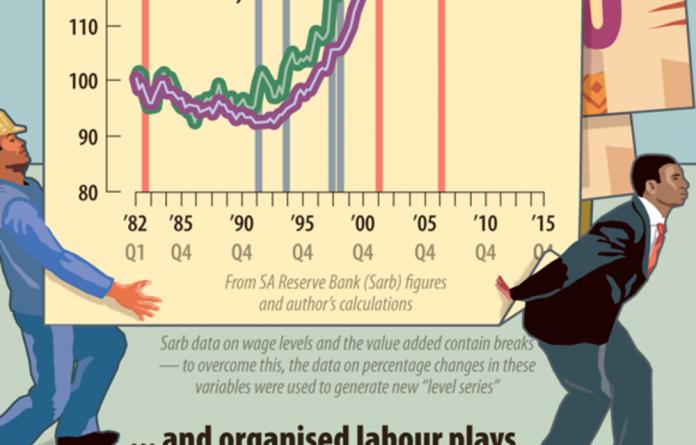 A friend recently commented on how much easier it is to write when one is angered. I don’t find it easier but the economistic arguments and reluctance of business to raise the recommended minimum wage of R3 000 to the R4 500 advanced by labour federation Cosatu is a matter of moral indignation.

The R3 500 minimum proposed by the National Economic Development and Labour Council (Nedlac) “panel of experts” is likely to become yet another compromise that is symptomatic of the parallel-track policy regime the ANC continues to pursue. The one is of extensive redistribution, with more than 60% of government expenditure going to the social wage; the other is an economic policy that depends on faith in the “unfettered” market.

My work with a group of young adults in Khayelitsha, Cape Town, looking into their experience with money — securing work, earning income and being in debt — has revealed a tension that is central to the matter of the minimum wage. The tension is, simply put, between personal advancement and family obligation.

A quote from one member of the group describes the tension poignantly: “Life of a black child is tough. After you graduate at university or college you struggle to get a job. Finally when you get a job everyone want a share of your salary. Your parents expect you to build them a better house before you build your own. Your siblings expect you to support them financially.

“Your uncles, aunts and relatives phone you every month telling you about their financial problems expecting you give them money. Your homeboys and girls in the community will never let you pass without giving them R10 or R20.

“You carry the burden of your family poverty and still you must start your own family. When your siblings go to college or university you are expected to pay.

“The truth is that life is a burden you will never understand because every time they ask for cash and you say ‘I don’t have’, they start to hate you and call you names. Some will even say ‘because now they is working, they no longer sees us as people’.”

These young adults, when employed, earn above the minimum wage — about R4 000 and a few up to R7 000 a month. With these wages they report that, by the end of the first week of the next month, they have no money for themselves. The demands of family and the cost of living — transport, food, electricity and airtime — are just too much. Many question whether working is worth the effort because their status becomes one of provider for the family.

These young adults experience anxiety about their ability to earn enough. They are also anxious about whether their contracts will be extended or terminated. They have lost their jobs frequently and unexpectedly. Hopes are raised, plans are made and then they crash only to be raised again:

“They will take some of us, so I’m waiting for them to take me. Yes, and then I can plan my future and my goals.”

“Because everything depends on money.”

The 2015 figures of the youth labour market from Stats South Africa reveal that of the roughly 10-million people in the 15 to 35 age group who were economically active only 2.3-million had secured employment in the formal sector. Another 1.8-million or so had contracts of unspecified duration and 1.4-million had contracts of limited duration.

Moreover, in the period between 2008 and 2015, there has been a 10% increase in contracts of limited duration — away from permanent and unspecified contracts. About 1.85-million were self-employed or in casual piecework.

This means that a minimum of 5.5-million of the 10-million economically active youth were either unemployed or underemployed and in an insecure earnings position. There were a further 1.5-million discouraged workers.

Uncertain, precarious employment has become the norm and it produces much anxiety and frustration. Yet even in the face of this, instead of “saving for a rainy day”, they feel an intensity to spend. As one young person put it: “When I have a job I spend like there is no tomorrow.” Another person describes how they would spread their spending over time if they had a “proper job”. When there are savings they are usually intended for end-of-year holiday expenses.

Could it be said that wages are used like pocket money?

Contributions are made to household expenses and what’s left over they attempt to keep for themselves, but they know that they are obliged to give to their family. Money is not enough. They feel frustrated and “held back” by circumstances.

Feelings of frustration and anxiety are intensified because not having a permanent job means they cannot borrow from banks or formal-sector microlenders. Instead, they borrow small amounts, at an extortionist rate of 50% a month from local moneylenders. For most of this country’s youth access to credit is as unavailable as it was for their parents in the days of apartheid.

Worse, job insecurity and unemployment means they depend on their family’s social grants and on donations from those who are employed. The effect is dependence and frustration of normal life-cycle processes, such as having a home of your own, getting married and becoming socially mobile.

It is here where the “domestic moral economy” confronts an economistic trickle-down rationality that puts the firm, corporate interest and monetarist policies above family wellbeing. What constitutes enough money to live on is clearly not simply a matter of a comparison of numbers, calculation or business feasibility. The call for a minimum wage as proposed (with evidence) by Cosatu could be considered a warning by a working population that has been systematically impoverished by the high cost of living and the dire economic circumstances of their unemployed and dependent family members.

It is a call for economic justice in an extremely unjust and unequal society. It is the “moral economy” of our country that is brought into focus and with it our long-term social sustainability.

In this vein, those who are “permanently” or securely employed and who earn less than R10 000 a month use their wages to borrow to support their families, which often includes more than two adults of working age.

They borrow from microlenders and buy on credit at a cost of more than 40% interest for a short-term loan, including various additional costs and fees.

Sometimes, more than 70% of their disposable income goes to debt repayments. They are undeniably the working poor.

Notably, although this segment of the working population is by far the largest in number, in 2013 it constituted less than 10% of the R1.4-trillion personal credit market. Debt relief discussions are in progress in the department of trade and industry parliamentary committee. Perhaps some relief will come from this process.

The “moral economy” of minimum wages and earnings must address the structure of the labour market.

Temporary, insecure contractual or casual employment, hidden behind gestures of “internship” and training or the logic of labour flexibility, must be addressed together with the high levels of indebtedness, which bleeds the meagre wages of the working poor.

Setting a minimum wage without confronting the unreliability of employment and without dealing with the financial debt of those who are permanently employed is not going to be enough, especially for the younger generation.

The proposed minimum wage is a bad compromise that panders to the market rather than addressing the shame of impoverishment and exclusion.

John Spiropoulos is a PhD candidate in the sociology department of the University of Cape Town. The views expressed here are his own

The passion economy — loving what you do to earn a living