Joost van der Westhuizen: A mixture of mischief and instinct 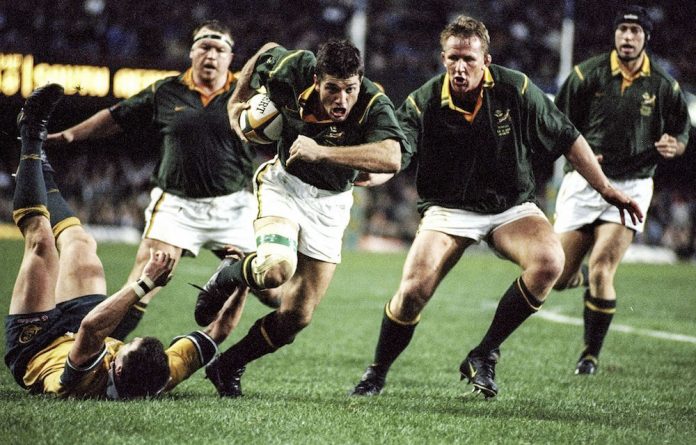 A week of mourning ends with a grand finale at Loftus Versfeld on Friday. The life of Joost Heystek van der Westhuizen will be celebrated at the stadium he called home for his entire career. There will be tears and cheers and the page will finally close on one of the greatest of South African sporting careers.

Joost had a knack for being in the right place at the right time. He made his provincial debut for the Blue Bulls just a few months before the Springboks emerged from sporting isolation in August 1992. His captain, the great Naas Botha, recognised the nerves displayed by the youngster: “Just throw me the ball,” said Naas, “and I’ll catch it.”

Three years later, Joost was on hand to throw the ball to Joel Stransky, whose cool dropped goal won the game and the World Cup for the Springboks and the Rainbow Nation. Typically, it was a last-minute change of plan that sealed the win; Joost was all about instinct.

Stransky recalls the moment: “We were all tuned into the fact that we needed to score points and that a draw was no good to us. So, as Joost put the ball in, I could see where [Andrew] Mehrtens had gone and where [Graeme] Bachop had gone, and that suddenly there was a hole I could step in to make the kick. So I was trying to get Joost’s attention, but there was obviously a huge din and eventually I had to give him a hand signal to say cancel the move.

“The move — a blindside back row one — would have been initiated by a small tap on Rudolf Straeuli’s bum and, instead of doing that, he sent the ball back to me. Joost was always prone to throw the odd wild pass but, when it really mattered, he was on the money. He always teased me that it was the best pass he ever gave me, and I told him that I still had to jump about two feet to the left to get it.”

Unlikely as it may seem now, Joost had to fight constantly for his place in the national side, principally because he was so far removed from the conventional scrumhalf. Nick Mallett lost patience with him towards the end of his tenure as Springbok coach. He dropped him to the bench in favour of Werner Swanepoel for two Tests against Australia and one against New Zealand in July 2000. History records that South Africa lost all three games.

One of Joost’s rivals for the number nine jersey, Kevin Putt, once said: “He wasn’t a scrumhalf’s arse but he was a hell of a rugby player.”

Stransky, who played alongside Putt for Natal, suggested that there might have been a touch of envy in the statement: “I think Putty was a little harsh on him there. He was the modern scrumhalf, wasn’t he? Bigger, stronger, a runner with the ball and an unbelievable rugby player. Great pace, great acceleration, great stepping ability, brilliant hands, great vision.

“As a scrumhalf, it’s fair to say he wasn’t ideal. He was left-footed, which meant that at the base of the scrum it was difficult for him to kick, and every now and then his pass was a little wild, but those slight deficiencies in the traditional scrumhalf game he more than made up for in his overall ability to play the game of rugby union.”

That was never better illustrated than at Twickenham, five months after the World Cup triumph, when Joost scored a try for the ages. From a line-out on the England 10-metre line, he broke down the touchline, beating Kyren Bracken and chipping the ball over Tony Underwood, before regathering and scoring in the corner. It was Stransky’s favourite Joost moment.

“There was nothing on and the fact that he scored there was a minor miracle. Out of nothing he created a scoring opportunity and took full advantage. It was a bit of individual brilliance that no one else in the history of the game could have or would have been able to do.”

The intensity of Joost on the field was replaced by a youthful sense of humour off it. “I remember him crawling under the table and setting our shoelaces on fire after a Test match. He had that naughty little look in his eye and the impish laugh. Those smiling eyes gave away the mischief in his personality.”

At the very end those intense green eyes were the only way Joost could communicate his innermost thoughts. “It must have been incredibly tough to have a 100% perfect mind in a failing body and almost to be sentenced to some sort of prison,” said Stransky.

“It must have been dreadful for him to carry on smiling but he carried on right to the end. He was a fighter. He made mistakes in life, as we all do, but he came through the other side stronger and as a better person. The way he braved the challenge of fighting the disease was an unbelievable example and an inspiration to all of us.”