COMMENT
Two decades after the end of apartheid, South Africa’s socioeconomic landscape is still visibly divided along racial and geographic lines. A relatively small group of South Africans enjoys a standard of living similar to that of citizens from developed countries, whereas the poorest 20% of the population — almost all black — has spending power on a par with the poorest developing countries. Much of that inequality is rooted in the labour market.

The public education system is regarded as a crucial link between poverty in childhood years and eventual mobility into a higher socioeconomic class. Yet, despite rapid increases in access to education since the 1970s and growing average educational attainment for black individuals, labour market inequality appears to be almost as intractable as it was in the early 1990s.

At the heart of South Africa’s structural labour market inequality is its dualistic education system. This dualistic system perpetuates apartheid patterns of poverty and inequality by producing education quality of a developed country standard mainly for the affluent, and poor- quality education for the majority. A small minority of learners attend functional, high-quality (mostly formerly white) schools, staffed by qualified teachers and characterised by good management, assessment and parental involvement. Learners graduating from these schools have relatively good chances of entering the upper end of the labour market, characterised by high wages and employment stability. 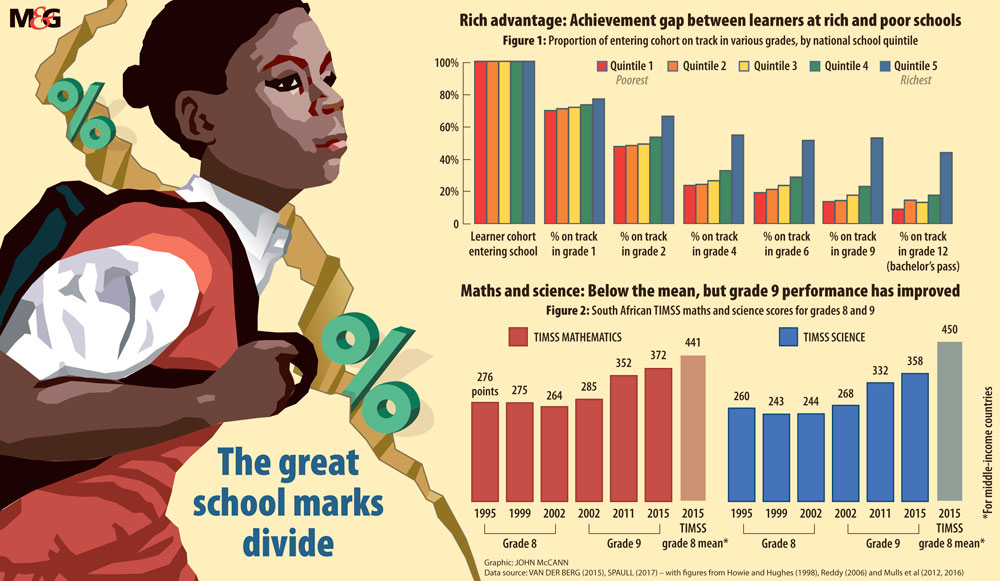 Traditionally this part of the labour market was dominated by whites, but the removal of apartheid- era restrictions, government interventions and improved access to better-quality education for some black children have allowed a segment of the black population to achieve upward social mobility through the labour market.

The graphic shows the proportion of the learner cohort entering grade 1 who are on track over time, according to an analysis based on the Annual National Assessments of 2012. In other words they are appropriately aged for the respective grade and performing at least at the low international benchmark for reading.

Schools are categorised into five groups or quintiles according to the economic background of their learners, with quintile 1 being the poorest and quintile 5 being the richest. Figure 1 in the graphic reveals that educational achievement gaps between the poor and the more affluent are cemented as early as the middle of primary school. By grade 4, fewer than half the learners who had started grade 1 three years earlier would be appropriately aged and performing at or above the low international benchmark for reading.

The decreases in the proportions of on-track learners are most marked in school quintiles 1 and 2 (the poorest 40% of schools), where only one-third of learners starting grade 1 would be on track by grade 4.

He finds that 58% of the grade 4 learners tested in the Progress in International Reading Literacy Study could not read for meaning in any language and 29% were reading illiterate. Learners who cannot read for meaning are at risk of becoming part of the “silently excluded”, whose early reading backlogs accumulate over time and prevent them from participating in academic environments.

The early reading backlogs of many poorer learners spill over into other subjects in later grades. South Africa’s performance in the Trends in International Mathematics and Science Study between 1995 and 2015 is shown in Figure 2 (using data from the Human Sciences Research Council). Although there are no remarkable changes in scores between 1995 and 2002, in 2015 grade 9 pupils scored 108 and 82 points higher than in 2002 in maths and science, respectively. A year’s learning is roughly equal to 40 points, which means that the average performance in maths and science improved more than two grade levels between 2002 and 2015.

The improvements also mask another salient feature of our education system: education quality is not evenly distributed. Although the average learner in fee-charging schools (the top two quintiles) scores close to the middle-income country average score of 441 points, learners in the bottom three quintiles (no-fee schools) score 2 grade levels below their counterparts from wealthier schools.

These findings make a strong case for what is increasingly regarded as being the most cost-effective solution in a resource-constrained society — intervene as early as possible, with a particular focus on education quality in grade R and the primary school grades to minimise the cumulative learning deficits associated with poverty. Even earlier interventions in good-quality early childhood development would be valuable.

The persistence of deep inequality two decades after apartheid is a powerful indictment of our society’s failure to overcome past injustices, despite considerable shifts in government spending. The education quality disadvantage so pervasive in formerly black schools negatively affects the labour market prospects of the current generation and also makes it much more likely that future generations will suffer the same fate.

Overcoming the poor-quality education in most of our schools is essential to avoid a cycle of slow economic growth and more political instability in a fragile labour market. The only lasting remedy for deep-seated economic inequality is achieving quality education for all. This requires not so much additional fiscal resources as greater attention to early learning as the foundation upon which all further learning builds.

The authors are attached to Research on Socio-Economic Policy (Resep) at the University of Stellenbosch. This opinion piece is based on a new report funded by the Programme to Support Pro-Poor Policy Development, a partnership programme between the European Union and the department of planning, monitoring and evaluation. This report, authored by Eldridge Moses and Servaas van der Berg is titled A Society Divided: How Unequal Education Quality Limits Social Mobility, and can be found on Resep’s website at http://resep.sun.ac.za/