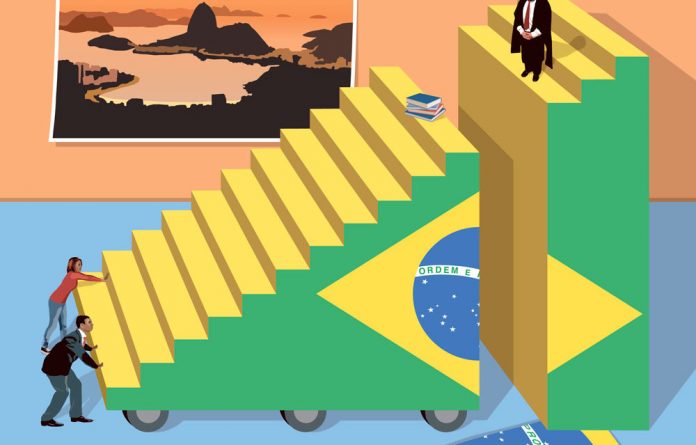 Thirteen university students from six institutions travelled to Brazil this month to look at whether free tertiary education can work in an emerging market with high levels of inequality and limited state capacity.

En-novate and its partners chose Brazil partially because it ­experiences many of the same socioeconomic problems as South Africa, and because it has provided free public university education for decades.

Free education is enshrined in Brazil’s constitution, and it extends to the tertiary level. Brazil is undergoing one of its worst recessions, with an economy that has ­contracted for the past eight ­consecutive quarters.

President Michel Temer’s government is in the midst of implementing austerity measures, which some believe will result in the privatisation of Brazil’s public universities.

Given the demands for free tertiary education in South Africa, En-novate believes that exposing these student leaders to global examples of the effect free education has on society, from the schooling system to the job market, will help to guide the conversation back home.

Only 15% of Brazilians are enrolled in higher education, and only 10% of the population graduates from institutions of higher learning. Historically, the Brazilian government has spent up to 10 times as much funding on higher education than on basic education, even though only 13% of the general population attends university.

Brazil’s tuition-free state and federal public universities are funded primarily by the poor and working-class majority through value-added taxes. Paradoxically, it is the children of the wealthy — who attend private high schools and perform better in the entrance exams — who gain admission to the public universities, because only a small percentage of applicants are taken in every year.

Based on the numerous conversations we have had with Brazilian academics, students and businesspeople, there is an overall consensus that the wealthy should pay to attend the public universities, either in the form of tuition or a special fee.

But we also heard a narrative that suggests the rich would never agree to do so for cultural reasons: Brazil abolished slavery only in 1888, and a lingering master-slave mentality remains, which some say makes the elite unwilling to help the predominantly black underclass to obtain the same academic status.

One professor suggested that if the rich were forced to pay to attend public universities and subsidise the poor, they would exert political pressure on the government, and would prevail because of the levels of corruption.

What we saw in Brazil confirmed that the public and private sectors can cause equal havoc in the higher education system, and both systems must be strictly regulated. Corruption and lack of long-term economic planning led to a six-month postponement of classes at Rio de Janeiro State University, because the state had run out of money to pay its support staff. This extended to the university’s public teaching hospital, which was closed and could not serve some of the city’s poorest citizens. Both institutions recently reopened.

We heard stories from students that public universities often lack electricity, water and toilet paper because the government is unable to pay its suppliers. Professors at the public universities are deemed civil servants with lifetime employment, which creates a new set of problems that lead to frequent strikes and a diminished meritocracy.

One parent told us that even though her son obtained a place to study industrial design at the state and federal universities, both departments were closed because of the lack of finances, and she was left with no choice but to send her son to an expensive private university, which she cannot afford.

A Brazilian entrepreneur spoke of two friends who studied medicine, one at a public university and the other at a private university. The former took twice as long to complete his degree as the latter, because classes were postponed because of frequent strikes related to the government being unable to pay its bills.

Three-quarters of Brazil’s university students attend private institutions, which are generally of a much lower quality than the public universities. There has been a proliferation of for-profit universities since deregulation in the 1990s, and many only meet the minimum academic standard required by law. Universities lower costs to increase profits by compromising quality; one professor suggested these universities almost “print degrees”.

The public sector, because it cannot meet the demand for public universities, subsidises the private sector by offering grants (Prouni) and loans (Fies) to low-income students to attend private institutions, even though this gives them dim career prospects.

In the absence of strong financial and academic quality-control regulations, students are incurring government-backed debt to obtain substandard degrees at private institutions, without knowing whether these loans can be repaid.

What we saw in Brazil is that free tertiary education does not work if the government cannot afford to pay for it, especially if the government lacks the organisational capacity to run large institutions effectively. If a government mismanages its own departments, it will create a bloated bureaucracy and mismanage its public universities, wasting a large amount of funds in the process.

Nordic governments are supported by a solid tax base and maintain meritocratic institutions with fiscal discipline, which means they have the capacity to manage high-quality public universities.

But many emerging market countries are not in a position to manage and fund such large and complex institutions.

If a government deregulates the for-profit higher education industry, those institutions’ sole goal will be to make as much money as possible, often at the expense of academic excellence.

We believe that, given Brazil’s history of racial and social inequality, its government has a responsibility to democratise its universities by making them accessible to disadvantaged citizens.

But we do not believe that in such unequal countries government can balance quality, meritocracy and inclusivity effectively. Thus this should be left to a strictly regulated private sector; the government’s main role should be to regulate and provide as many bursaries and loans as possible .to deserving low-income students to go to well-managed private institutions.

The students we have taken to Brazil may reach a different conclusion to ours. These types of experiences abroad help us to learn from others’ successes and mistakes, and prevent mistakes from being repeated in South Africa.

Dan Brotman and Natan Pollack are the cofounders of En-novate, which facilitates global experiences for entrepreneurs, businesspeople, corporate employees and students