“This place is still verkramp [conservative] — it’s so backwards, the different races keep to themselves. So no, you can’t really see any evidence of Uncle Kathy’s legacy of nonracialism,” nephew Farid Kathrada tells the Mail & Guardian in Schweizer-Reneke — or Schweizer, as it’s known to residents.

“You’ll hardly even find mixed marriages in this town,” his son Haroon adds, to illustrate the divide.

Schweizer is heavy with colonial and apartheid history but, throughout Kathrada’s life, proved to be fertile ground for resistance against the apartheid system.

The town is named after two Boer soldiers — Schweizer and Reneke — who defeated the indigenous Koras of Mossweu in a bloody battle over control of livestock and farmlands in 1885, and whose busts remain outside the municipal offices.

The Afrikaner forces consolidated the town into a stronghold in the then Transvaal. Today, much of the financial activity in the surrounding fertile lands is dominated by the Afrikaner community.

To many Afrikaner supporters of apartheid and colonialism, Schweizer was considered an area won through war with the natives and was coveted by the Afrikaner Weerstandsbeweging (AWB) and its leader, Eugène Terre’Blanche.

The white supremacist and separatist was so popular among the townsfolk that in 1993 he was awarded the freedom of the town. After falling off his horse, he declared in front of the Schweizer municipal hall to fully uniformed AWB troops: “This land is ours by right of conquest! [Schweizer-Reneke] is where we ended and the third Boer War, another South African war, will start here again,” according to South African History Online. 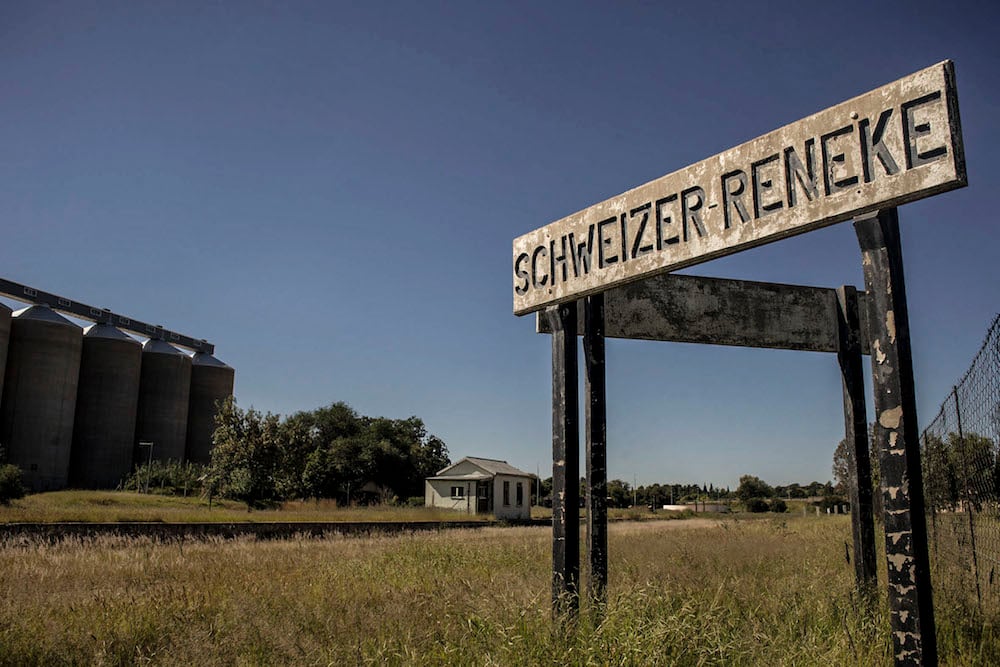 The early forms of oppression that shaped Terre’Blanche’s ideology and attracted his followers to occupy the area is what awaited the Kathradas when they moved to the colony from India at the turn of the 20th century.

Kathrada’s father, Mohamed, moved to Schweizer with his wife in 1919 and opened a small general dealer store next to the Dutch Reformed Church. Nearly 100 years later, the town is still home to the fifth generation of Kathradas.

The family’s first home, a humble house with four rooms, was a few dozen metres down the road from the store, in the town’s central business district. For decades thereafter, the family was able to live in relative peace — or, at least, equally oppressed alongside other Indians and people of colour.

During his formative years, the young Ahmed and his two brothers, Suliman and Esope, attended the Rochunville Primary School for Indian and coloured children, before moving to Johannesburg to continue their schooling.

Although Kathrada left the town at the age of eight, towards the end of the 1930s, his brother recalls how the emboldened racism exercised by the predominantly Afrikaans-speaking white population steered him towards politics and activism.

At an early age, Esope told the M&G, his brother already showed signs of his intention to resist the colonial forces and, later, the apartheid regime. “We’d be walking on the pavement and we’d see white people and we would have to cross the road. He didn’t want to cross but he knew we had to, and so we did,” Esope chuckled.

By the time Ahmed had spent two years in Johannesburg, his brother Esope started noticing how the resistance struggle began shaping his character. Later, Ahmed would stay behind in Johannesburg when his father sent a car to bring him and his brothers home to Schweizer for the holidays.

“From a young age he was always interested in politics and used to love hanging around [with communists] at the Red Square [in Fordsburg]. He didn’t want to go back to Schweizer,” Esope, now 83, recalls.

“And my father had to send another car just to go and fetch him,” Esope adds, as he sits in his lounge at their home in Rochunville, traditionally the Indian section of the town.

It was during these years that Ahmed built a network of allies in the South African Communist Party and the Transvaal Indian Congress, and took part in passive resistance against the early versions of apartheid law.

The beginning of the 1940s ushered in the implementation of overtly racist laws in the Transvaal and, with a resistance movement gaining traction in Johannesburg, Ahmed protested against South Africa’s participation in World War II.

Back in Schweizer, his father’s shop remained open and operated normally, as his family had not yet been placed on the security forces’ radar. But things changed in 1952, just after Ahmed was arrested and put on trial with the leaders of the ANC and South African Indian Congress for their defiance campaign against unjust laws.

He was sentenced to nine months in prison, suspended for two years, and then went into hiding from the authorities.

“After he was arrested, the [security branch] harassed the family a lot. Before then, the annual licensing application for businesses was no problem, but it became a big issue because Uncle Kathy was arrested for fighting apartheid,” says Farid.

Esope remembers how the regime’s security branch raided the family home after word spread around the relatively small community that Ahmed was visiting.

“We got a lot of trouble from them. They used to come to the family house, shouting: ‘Waar is hy? Ons weet hy is terug [Where is he? We know he’s back]’, and would search the whole house. Of course, he wasn’t there. He was hiding on the farm.”

The Hessie farm is about 5km outside Schweizer and is still owned by Ahmed’s sister Amina. The plot is now surrounded by mealies and is more developed than the two-roomed house he sought refuge in while on the run from the authorities.

Amina’s son Faruk remembers Ahmed sneaking into the house in the middle of the night over a weekend, followed by other family members from Schweizer soon afterwards.

“Of course, by the time the security branch realised where he was and raided the farm on the Monday, he’d already left back to Johannesburg on the Sunday night,” Faruk says.

Ahmed’s trips home became increasingly dangerous as he rose to prominence in the anti-apartheid movement. By the end of the 1970s, his family’s business and home were firmly in the crosshairs of the apartheid regime and they were forced to relocate.

“In fact, it was some of the people in the NG church next door that agitated for our shop to be moved away and for our house to be broken down. We were moved to the Indian section, Rochunville,” Farid told the M&G.

The Group Areas Act separated the town into racially segregated neighbourhoods: Rochunville and Charon, with their three- to four-roomed council houses, were reserved for Indians and colour­ed people.

Newtown, the “wealthy” section of the town, located in the valley of the Harts River and near the popular Wenzel Dam, was reserved for white people and Ipelegeng, a neglected township on the site where colonial forces did battle with the indigenous Koras people, was reserved for black people.

Faruk, Farid and Esope Kathrada cannot remember a single event in their lifetime when people of different races interacted in a social or professional setting in Schweizer-Reneke.

The closest was when the Indian community, with Farid among them, staged a protest against Terre’Blanche’s visit to Schweizer in 1993 — they were told to “fokof” by AWB supporters who filled the front lawns at the town hall where Terre’Blanche addressed them.

“In Schweizer, the black people and Indians have a great relationship and we get along well,” Farid says.

“But we get along with the [white] friends we have. The ones we have we keep, but the rest won’t change, so that’s it,” Faruk adds.