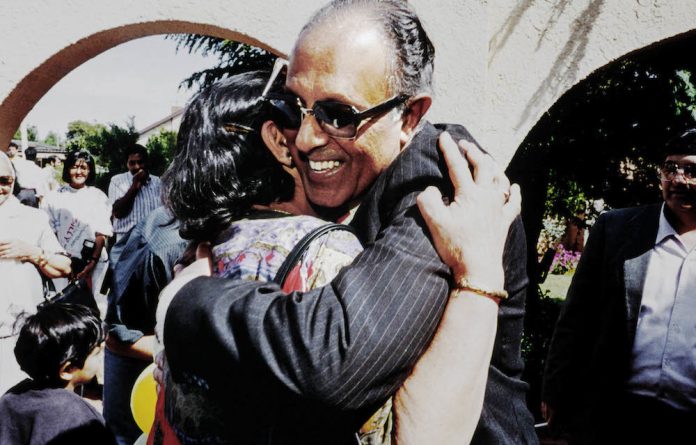 The lifelong bonds, as close as family, that he cemented on the Island — his home for 18 years — and the principles of solidarity, kindness and humility that he espoused, are part the rich legacy he leaves after his death at 87 this week.

Many of his comrades, friends and family tell of the man’s wicked sense of humour.

It is a quality that enabled him to make light during moments of struggle, break the ice with adversaries and tease those he was fond of.

Razia Saleh, a member of the Ahmed Kathrada Foundation and senior archivist at the Nelson Mandela Centre for Memory, said the man she called “Mr K” may have once or twice got into trouble for his good-humoured teasing.

“He just saw the funny side of life,” she says.

“In his memoirs he says how he was using coded languages to correspond with people outside. He said he needed a name for Mac Maharaj. They decided to call him Cyclops, because he only has one eye,” she says.

“He had an ability, even under the most difficult circumstances, to see the humour in it.”

In his memoirs he says some of the prisoners on Robben Island just didn’t get his sense of humour.

“So he would say something and they wouldn’t laugh,” Saleh says of Kathrada’s jokes bombing.

His sense of humour did not offend Maharaj, who spoke fondly of his friend and comrade this week.

“He had a wicked sense of humour. An anecdote about Kathy, even recited by Madiba, is that when it came to me and Mandela was forming his Cabinet he was not sure what portfolio he should assign to me,” Maharaj says.

Life before his sentence of life imprisonment in 1964, the culmination of the seminal Rivonia Trial, was one of absolute commitment to his political work, peppered with a dance or evening at the bioscope when possible.

“It was at a party that I met Kathy, at the end of a conference, and then we remained friends and comrades,” ANC stalwart Sophia Williams-De Bruyn recalled this week.

Arriving in Johannesburg from Port Elizabeth as a young woman, Williams-De Bruyn recounted how thoughtful Kathrada, who was slightly older than her, had been.

She says the Coloured Congress, which she worked for full-time, came with an inconsistent stipend.

“I didn’t know that Comrade Kathy was watching … He arranged that I would have a staple meal a day,” she said, adding he had quietly observed that she was not eating enough, and sometimes not at all.

A cook at a canteen of the offices of the Medical Aid Society would keep a plate of food for her so that Kathrada could be assured she would have at least one meal a day.

“And so I would walk from West Street right up to End Street, and there I would stand and wait for my lunch. If the white staff were still busy [I would wait] until they had all left the building then I would go there.

“That was the kindness that I know about Kathy,” she says.

As a close friend she says Kathrada had “two left feet” in spite of his love of the tango, and was a man of profound empathy.

“After I came from PE, and was based in this office [of the African and Coloured congresses] at my desk that he knew, it was going to be the Christmas holidays and Kathy came in and looked at me and said, ‘Why is your face so long’,” she says.

“And at that point I just burst out crying and I said I was crying because I wouldn’t be able to go home to Christmas.

“And he called Babla Saloojee [who was killed in 1964 when he fell seven storeys to his death from a Special Branch building] and they had a short discussion and he said here is some money and go home for your holidays.

“He had qualities of kindness, integrity, hard work, always striving to see us young ones did our chores,” Williams-De Bruyn says.

She recalled with wonder how the Pahad brothers would procure banned films and Congress Alliance activists gathered for evenings spent imbibing “subversive” culture.

Of Kathrada’s love for dancing to calypso that was de jour at the left-wing parties of the 1950s she says: “He was a very private person [but] he would open up at the small parties we had as young comrades.”

Roshan Dadoo, the daughter of South African Communist Party stalwart Yusuf Dadoo, was a child when she wrote letters to Kathrada when he was on Robben Island.

She too highlights “Kathy’s great sense of humour”, adding that in recent years he shared stories of the political “goings-on” and, to her delight, tidbits about the parties and the social lives of comrades.

“He was a person who understood people. He loved people,” Dadoo says.

“And that is why he connected across generations — with my generation and, of course, more recently with younger people.”

Yet in spite of the mirth shared about his late-night ice-cream sessions and the collection of gadgets to entertain his grandnieces, it is also in an atmosphere of profound despair about the state of the ANC and its government that Kathrada has drawn his last breath.

His last major public political act in a life of activism that spanned more than half a century was a letter last year to President Jacob Zuma in which he emphatically yet humbly requested that Zuma resign after the Constitutional Court’s finding that the president had violated his oath of office.

The sadness felt by some comrades is that Zuma’s conduct — as recently as this past week — is an affront to the principles espoused by a generation of cadres that included Kathrada.

Speaking at a memorial on Tuesday, ANC veteran Barbara Masekela spoke with pain about the current state of affairs.

“I wish that comrade Kathy had left at a happier time, that he was smiling about South Africa, but it is not so and I think that’s why we feel his passing so deeply,” she said. “I don’t think we can say that he was happy at the outcome of the country.

“We were part of a very lucky generation. We have had the opportunity to experience the most courageous, fearless, eloquent and most selfless leaders. Kathrada was among them.”

When I met Ahmed … Friends tell their charming stories

“In this new phase of our struggle for democracy and freedom, the voices of giants like Ahmed 'Kathy' Kathrada sound ever more imperatively."
Read more
Special Reports

‘He wasn’t afraid to speak to power’
Read more
National

“He was the youngest of the Rivonia trialists imprisoned on Robben Island, and that gave him both access and a very particular role,” recalls Manuel.
Read more
National

Head into the township section that bears the stalwart’s name and it’s clear very little has changed.
Read more
Advertising
Continue to the category
Coronavirus