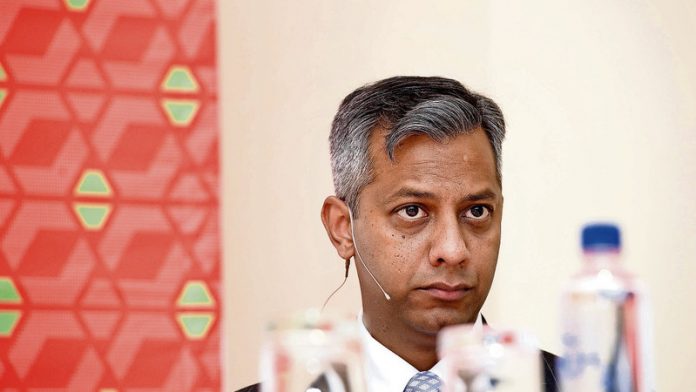 More emails leaked from the trove dubbed #GuptaEmails reveal that former Transnet chief financial officer Anoj Singh was treated to in a luxury suite at the exclusive Oberoi Hotel in Dubai on at least four occasions. At least one of those stays is confirmed to have been paid for by either the Gupta-owned company Sahara or those in the Gupta circle.

The Democratic Alliance sent the emails out in an email on Thursday, saying that every person involved in state capture must be held accountable.

Singh is now the Eskom CFO.

He was Transnet’s chief financial officer in 2014 when he travelled to Dubai. Booking confirmations attached to the emails show that Singh was booked to stay at the Oberoi in Dubai in June, August, and November of 2014. He went on another trip in February 2015.

The emails were sent from a booking agent to Ashu Chawla, the current chief executive of Gupta-owned company Sahara, who then forwarded them on to another associate.

For the trip in August 2015, Chawla sent a short email to an associate, saying: “Please swipe the card for all charges.” The charges included a five-day stay at the Oberoi from August 7 to 12. It would have cost about R6 860 a day.

During his time at Transnet he worked under the man who has subsequently stirred much attention because of his recent return and dismissal from Eskom – Brian Molefe. While Singh at Transnet, Molefe was the state-owned transport provider’s chief executive.

The DA has now accused the Guptas of courting of Singh to acquire Neotel contracts lucrative to the family company, Homix. According to the opposition party, it was while Singh was travelling to Dubai that Homix was awarded a R1.8-billion contract with Neotel.

The Neotel contract, the DA said, was necessary for the Guptas to secure an agreement with Transnet. On Thursday, amaBhunage journalist investigative centre and investigative journalists at the Daily Maverick revealed that the Guptas have been paid R5.3-billion in kickbacks for helping a Chinese supplier score a deal to provide locomotives to the state-owned company.

The Guptas have not yet denied any of the information contained in previous leaks, but their lawyer Gert van der Merwe spoke on behalf of the family on Sunday, when the first batch of emails were released, saying the leaks were politically motivated.

The municipality leaves it up to its executive committee and councillors to follow their conscience and contribute what they want to the city’s Covid-19 relief fund.
Read more
Politics

The ANC and EFF want national, provincial and municipal polls in 2024 but other parties disagree
Read more
Coronavirus

President Cyril Ramaphosa tells MPs he expects tough economic times ahead for South Africans, but the crisis is a chance to ‘look at the way we’re doing things’
Read more
Friday