Retirement? Just forget about it! 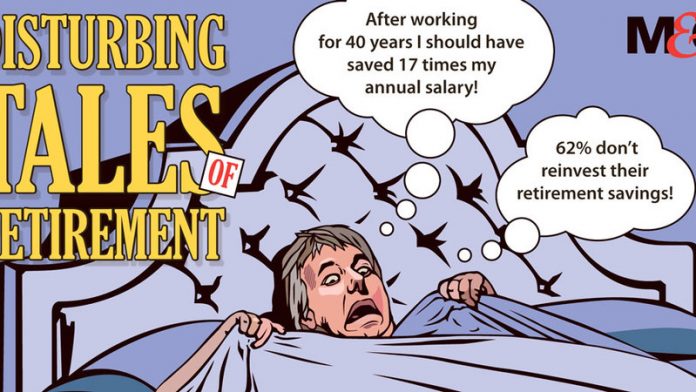 Saving for retirement is like trying to solve a tough maths problem – one that few South Africans have succeeded in doing.

“Ah,” you’re thinking, “I have got a pension fund that I started with my first job. I’ll be fine.” But the stats show you might well not be.

Investment firm Allan Gray looked at the rate at which its clients were drawing down on their retirement annuities and found that about 70% are likely to run out of money before they die.

The 2017 Sanlam Benchmark symposium interviewed more than 1 500 South Africans, the majority of whom were considered middle class.

“Whenever we have presented these findings before, the common pushback is that, if people were earning more money and were better educated, they wouldn’t be facing these situations,” said Viresh Maharaj, the chief executive of Sanlam Employee Benefits. “The subtext of this is: ‘No, this doesn’t apply to me; it applies to poor people.’ ”

So this year Sanlam aimed its research at educated, middle-income earners. Their findings showed that levels of financial stress and retirement readiness have little to do with earnings and much more to do with savings habits.

Chances are that, unless you’re executing a very disciplined retirement savings plan, you’re going to end up dependent on a state pension or living off the goodwill of relatives in the last years of your life.

Jeanette Marais, the head of distribution and client services at Allan Gray, said: “We are saving a small percentage of our income for 40 years to replace 100% of our income for another 30 years,” she said. “That can only work out if we follow a few very specific principles and guidelines.”

The good news is, no matter your age or discipline levels, you can start now to determine whether you’re on track and what to do to improve your situation.

How much is enough?

It’s useful to start with an end goal. How much money do you need to have saved by the time you retire?

“Seventeen times your last annual gross salary is believed to be a sufficient amount of capital to retire with,” said Marais. “This will provide you with an income of 75% your pre-retirement salary. Of course, living on 75% of your pre-retirement income can only work if you have no mortgage, you have no additional dependents and you are able to cut back on your lifestyle.”

Are you on track?

Okay, but what if you’re only 35 now? Unless you possess powers of divination, it’s difficult to know what your final salary will be. An industry rule of thumb suggests the following: After working for five years: You should have saved a capital sum equal to one year’s salary.

After working for 10 years: That saved capital sum should equal two years’ salary.

After working for 20 years: You should have saved five times your annual salary.

After working for 30 years: You should have saved 10 times your annual salary.

After working for 40 years: You should have saved 17 times your annual salary.

Many South Africans, after having done the maths, realise that they are behind schedule.

“Most people start early, with their first job, because it’s often compulsory,” said Marais. “But there are two things that prevent them from saving the necessary amount. First, they start by saving the minimum, and that’s 7.5%, which is half what you need to. When you start it’s hard – you want to buy cars and homes and get married and have kids and so forth,” she said.

The second, most pervasive problem is that people draw and spend their pension when they change jobs. “That means they use their capital and they have to start over again,” Marais said.

The 2013 Sanlam Benchmark survey found that 62% of employees don’t reinvest their retirement savings for retirement when they change jobs or are retrenched. The majority of respondents said they used the money to pay off debt, said Maharaj.

But, by doing that, they were often not aware of the implications.

Also, if you left the money untouched until retirement, you would be subject to lower tax rates than when drawing the cash, he said.

You might have fallen prey to “conspicuous consumerism”. “It’s the culture of having the bright red BMW in your front yard while being behind on your house repayments,” he said.

So you have had a wake-up call. It’s time to start saving for your retirement but you’re starting late.

You’ll need to make up for lost time and this is exacerbated by the loss of compound interest. According to calculations by Allan Gray, this is how much you’ll need to save to reach retirement goals of being able to draw 75% of your income by age 65. These numbers assume that your investment will achieve a return of inflation plus 5%.

“You might be scared by these numbers but this is the reality,” Marais said. “People think they won’t lose out on very much growth in the first 10 years. The graph is quite flat in the beginning. But what you lose is the compounding effect of the last 10 years.”

It’s often unrealistic to save more than 40% of your gross income. So, if you’re making up for lost time, “almost the only remedy is to try to retire five years later”, said Marais. “In this way, you could almost make up all of what you have lost.”

Wherever you are on the journey, Maharaj offers a few rules of thumb to help you on your way. “First, get a baseline of where you currently are. There are a number of user-friendly calculators online. Use one to find out how much you actually have in your retirement annuity,” he said. “Once you have got that baseline, do some reading.”

Then, if you can access a financial adviser, use one. “On average, people who use financial advisers are better prepared for retirement than those who don’t,” he said. Along the way: keep a perspective on the importance of your savings.

“Saying ‘I have X amount saved in my retirement annuity’ is nowhere as sexy as dropping the top on your M-series coupe,” said Maharaj. “But being poor when you’re old is the least sexy thing – that’s the thing some people forget.”

Hunger is as big a threat as Covid

There’s never been a better time to invest in Africa

Pensioners lose out to ‘greedy’ firms