‘And for so long I have wanted to escape into the Dream, to fold my country over my head like a blanket. But this has never been an option, because the Dream rests on our backs, the bedding made from our bodies,” — Ta Nehisi Coates.

Realities and dreams collide in our present. Like Coates, unravelling the architecture of the American Dream, built on brown and black bodies, many of us have long realised the death of the post-apartheid dream.

It is a recent realisation, stark in its colour: built on colour, with the gradations of skin, and accompanying identifications, defining what it means to be a body caught in this space and time. South Africa: 2017.

Because this moment in history demands, many of the post-apartheid millennial generation are considering the tensions between the rainbow nation dream and reality, deciding to dissect it to find what lies at its heart.

Zara Julius’s new project, Mixed Space, is one such dissection into our post-apartheid reality. The 24-year-old multidisciplinary artist, who has a background in photography and anthropology, steps out of her preferred mediums with this venture into film, interviewing mixed-race adults about their experiences of themselves and their bodies. This separation is deliberate. 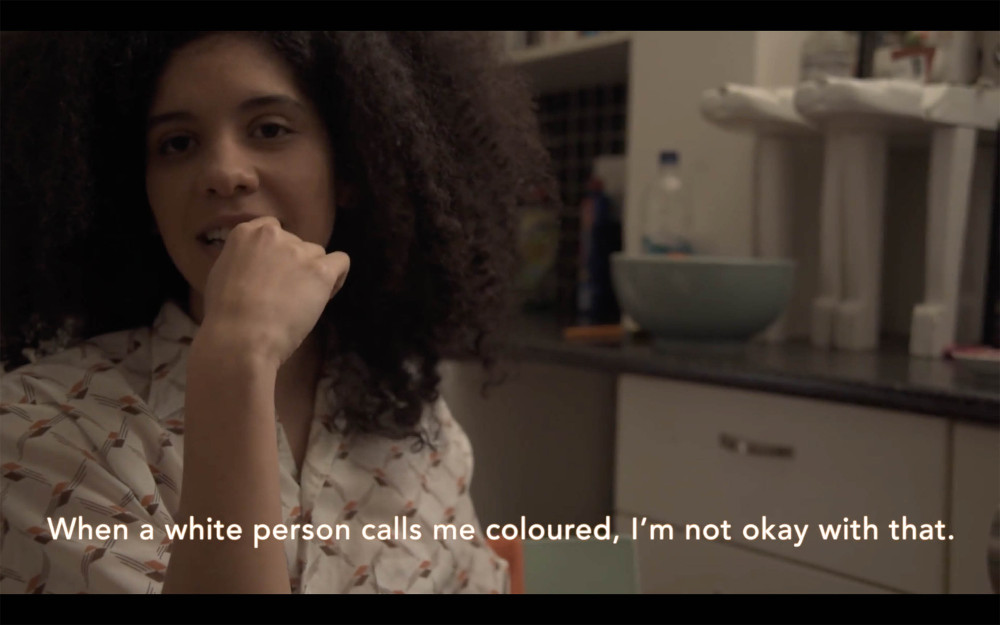 After the expectant glow of the initial post-apartheid moment, we have reached a point where more narratives of identity are being explored online and on screen.

Mixed Space follows the themes of Lebogang Rasethaba’s The People versus The Nation and Kelly-Eve Koopman and Sarah Summers’ web series Coloured Mentality, even as it deviates from their projects by having an explicitly clear political agenda — the dismantling of white supremacy.

Frantz Fanon wrote: “Consciousness of the body is solely a negating activity. It is a third-person consciousness. The body is surrounded by an atmosphere of certain uncertainty.”

Our bodies can be experienced as if separate from ourselves, when we consider what they mean in the world, outside of our understandings of who we are. As Kyla Philander, one of the people interviewed in Mixed Space, notes: “And then I truly looked at myself, like through the societal lens, and I was, like, ‘Yoh! That’s actually how people interpret me as a person’.”

Interpretations matter. They shape how we experience the world.

Julius enters into this conversation having recognised a gap in our conversations: the absence of the complicated experience of mixed-race millennials. The film is an 18-minute experimental project into the experiences of several participants. The word “participants” is key, because Julius sees her interviewees as collaborators and not subjects.

“I am coming from two backgrounds, she says. “The one is anthropology, which I have been trained in, and the other one is photography, which is self-taught. And the histories of both of those fields are extremely violent, especially in the documentation of brown bodies or black bodies on the African continent. They both constructed the colonial regimes, essentially … with that legacy, both of these things often necessitate a really imbalanced power dynamic … even though anthropology, the field, especially the ethnographic field, tries to be self-reflexive, there is very little research that people do in their own spaces or in their own communities.” 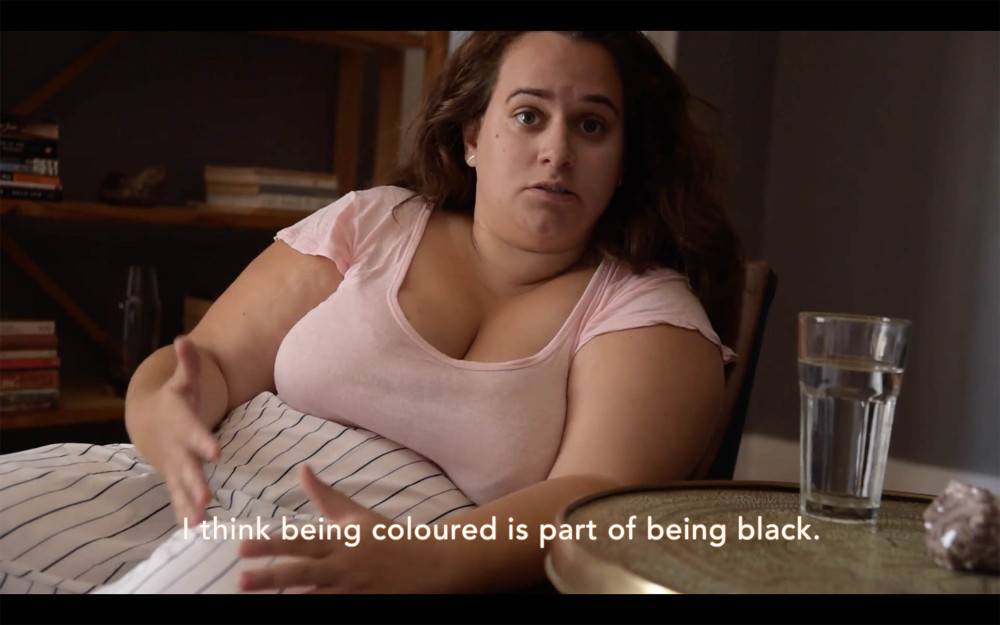 Mixed Space is an intentional study of her community, interviewing people from a similar class and perspective. In doing this, Julius takes the study of the Other — for rule, power and control — and subverts it. The resulting project is a study of the self as Other towards understanding, knowledge and liberation from the clutches of whiteness and its effect. Although not without its own tensions, the film asks questions about how we relate to each other, in our communities — where even the idea of belonging can be shaky.

The revelations in the film are fraught, exciting, challenging, devastating, funny, tense, liberating, poignant and anxious. This is, perhaps, what it means to be mixed — the resistance of anything singular, with all these layers operating simultaneously, resisting being pried apart, demanding that we wrestle with them simultaneously. Similarity and difference in experience, in appearance, in perspective. Although this is not exclusive to people who are mixed-race (none of us are as homogenous as the groups we are boxed in to) it is explicitly on the surface for those who navigate the world as such.

Similarity emerges in the way many of those in the film have focused on decolonisation in their contexts, and share Julius’s personal convictions. This narrow focus is deliberate, because Julius is particularly aware of how any work you create will bear your imprint, perspective and politics. “For me the film was a call for other mixed-race people to have a clearer sense of their politics. I think mixed-race people are so messy … sorry, but we really can be. Obviously the film includes other voices, but it’s also a self-portrait in some ways. And self-portraits are a projection or a performance of what you would like yourself to be.

What Julius speaks to is the complex interaction between oppression and privilege that underscores many mixed-race people’s experiences. Sizwe Mpofu-Walsh says in the film: “You occupy, again, this position of on the one hand being undoubtedly in an oppressive situation, and on the other hand undoubtedly being an oppressor.”

In excavating this, Julius is clear about not wanting the film to be an exposition of “mixed-race tears”, where experiences are shared solely to point out the perils of being mixed-race without realising how white supremacy and racism function in our understandings of ourselves and other people of colour. The filmmaker argues: “Experience that, but not to a point where it becomes self-indulgent, and not to a point where it becomes triggering.”

The film’s strength lies in being willing to have uncomfortable conversations about mixed-race people’s relationships with blackness and their position on the racial hierarchy, as well as to disrupt the idea that mixed-race people are either black or white by revealing their complicated experiences and backgrounds.

Another conversation that emerges is about coloured identity, but also stands removed from it. 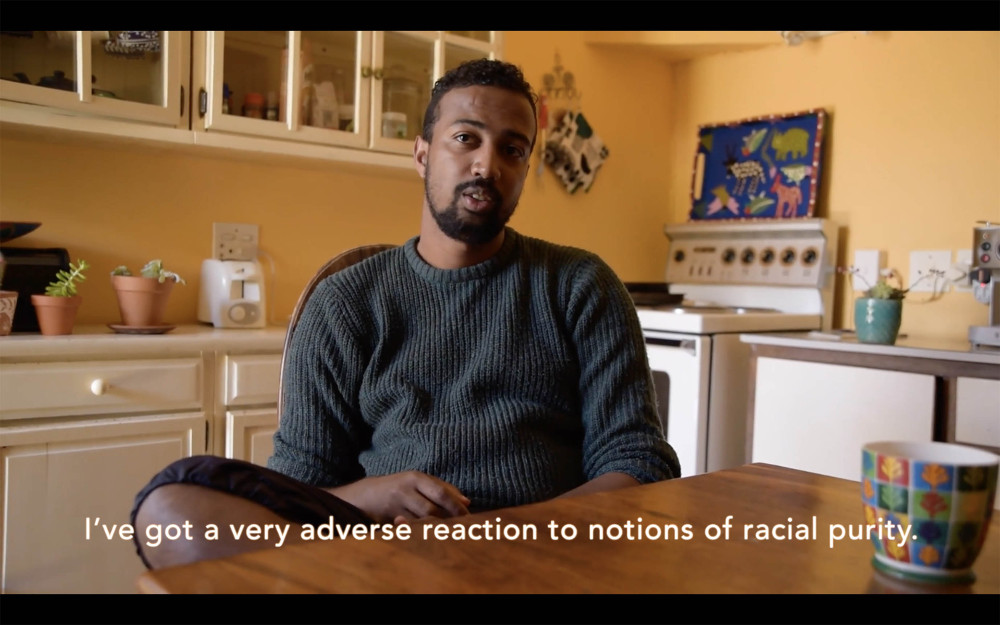 Julius shares many of my physical features as a coloured person. We are familiar with being mistaken for each other or thought to be sisters. Our experiences of our bodies connect and diverge. Same, but different. Coloured and mixed.

I ask about the absence of people who contrast her perspective in the film, Julius says: “I tried but these people didn’t want to be in it,” adding: “The only way I would’ve been able to include someone like that is if I contrasted them with someone who was calling that behaviour out, but then it would have been really humiliating to that person. And for me it’s really important to treat people who are my participants with respect — not to necessarily protect them completely from themselves” but not to “use someone like a tool.0”

Ethics are a primary concern for Julius, which she realises is “difficult when you are dealing with visual representation”.

“I also consciously chose to not have any B-roll [supplementary footage],in the sense that the film was just people sitting talking to you. Because some conversations we shouldn’t be allowed to escape or be distracted from. I’m every bit an advocate of audiences working a bit harder than just being entertained. It shouldn’t be easy to listen to someone’s story.”

The film is interspersed with images of participants who do not speak, which can be unsettling. I found myself longing to hear their stories, wondering about their realities as they appeared transiently on screen. Their stories felt subliminal: their bodies appearing as surface. We read bodies. We transcribe entire histories and realities on to them. Perhaps this was the point of their silence — to gesture to how race has shaped specific ways of seeing.

“Create more”, were the cries of the Johannesburg audience at the Keleketla! Library screening last week. Many asked Julius to extend the work and venture more into the realms of class, gender and other intersections. But Julius is reluctant: “I want it to be a conversation” where others “take the mic and talk as opposed to me being, like, ‘this is how every mixed-race person feels’.”

In this vein, Julius urges others to “speak to it or discredit it or provide more nuance to the conversation in a way that I can’t do myself”, but acknowledges that the newness of the medium might have played into her reluctance to make a longer film. The project, she notes, was not intended to be a “comprehensive conversation”, but a talking point, encouraging others to think and push the conversation further.

It’s a critical perspective. We are living in a “Big Brand” era. Everything and everyone can be a brand because of money. Resistance is a soda. Feminism is a T-shirt. Activism is an economy. This requires awareness of how we participate in it, a keen consciousness of why we do what we do, a need for more collaboration and a resistance of the trappings of visibility and micro or macro fame. “Don’t believe the hype; the hype machine is a machine,” Julius says.

Mixed Space demands that we ask: What does your body mean? How did your body come to have its meaning? Is your body yours? Julius delves into certain aspects of the condition of the mixed-race body, asking those who occupy them to “figure out what that means in the world, and then use it to do something constructive”, even as she acknowledges “that not everyone has had the first preliminary conversation yet”.

The film is a mix of absences and presences, perhaps unavoidably so. It feels like an important part of a puzzle that Julius acknowledges “doesn’t have an end”.

The project, then, does not set out to answer questions, but is a provocative starting point for a larger conversation about race. The conversation is beginning to more frequently appear in status updates, posts and tweets.

The way the film grapples with identity avoids the tragic representations that all too often dominate these discussions. Although the Somali poet Warsan Shire encourages us to “document the moments you feel most in love with yourself”, Julius perhaps asks us to document the moments that we are the most questioning of ourselves, to search for answers and use that knowledge towards the creation of a more liberated reality.