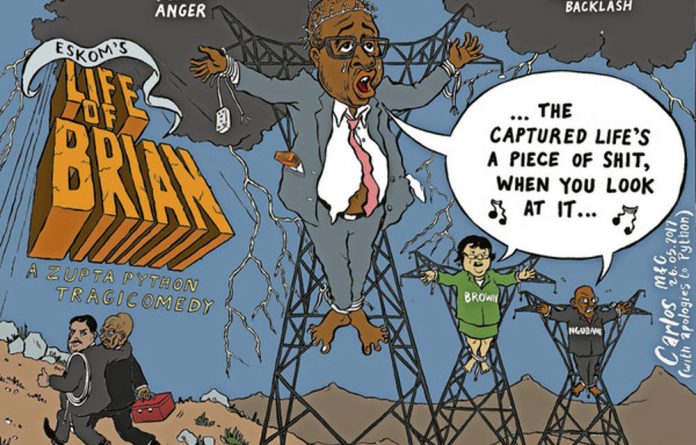 A Mail & Guardian cartoon depicting former Eskom CEO Brian Molefe as crucified on an electricity pylon is not in breach of the Press Code, Press Ombud Johan Retief has found.

Though the cartoon may offend, and has offended at least one complainant, Retief found, it neither mocks Christ nor puts him in a bad light.

The cartoon was “a political statement, designed to shock, not meant to be humorous and intended to reflect on the nature of what is happening in the country, as the cartoonist perceived it,” Retief said in a ruling.

A reader had complained that the cartoon mocked the crucifixion, where children could see it, and wanted to know why the cartoon did not feature figures from other religions.

The cartoon referred to the the 1979 satirical movie Monty Python’s Life of Brian in four different ways. The M&G had argued the cartoon had used that movie as the basis for satire.

The complainant held that an effective comparison between Molefe and Christ was offensive.

Retief said the focus of the cartoon was not Molefe, but Gupta and Zuma.

“This, I think, is a parody of the widespread Christian belief that Christ has died to save people from their sins – that he took the guilt upon himself in order to let people go “scot-free”. Applied to the cartoon, Molefe was instrumental in portraying the message that he (and two others) had to shed the guilt, while Zuma and Gupta left the Eskom mess with impunity.”

The fact that a complainant considers the cartoon offensive is not sufficient reason to restrict freedom of expression, Retief said.