Last month, the Department of Environmental Affairs approved the export and commercial sale of captive-bred lion products, disregarding protest from both international and local conservation groups.

The decision, outlined in a June 28 press release, was presented as an attempt to protect African lion populations, which have fallen by about 43% between 1993 and 2014.

“South Africa reiterates its concern that if the trade in bones originating from captive bred lion is prohibited, lion bones may be sourced illegally from wild lion populations,” the announcement read.

“A well-regulated trade will enable the department to monitor a number of issues relating to the trade, including the possible impact on the wild populations.”

The EIA’s findings dispute this assertion.

Facets of East Asian cultures believe tiger bones possess medicinal and spiritual value. The big cats have been poached for decades – particularly in China, Thailand, Vietnam, Cambodia and Laos. In the latter three countries, tigers are now functionally extinct and hunters have increasingly turned to lions and their panthera relatives to provide for skyrocketing demand.

The report stipulates: “The incidence of lion parts in the market stimulates desire for tiger products and also has an impact on trade dynamics as experienced traders and consumers request evidence that dealers have tiger skin or carcasses to satisfy themselves that the product being offered is genuine tiger bone. Traders may either go to tiger farms or tiger range countries to directly source genuine tiger parts to avoid being sold parts and products that are either lion or fake.”

In short, as lion products flood the market, demand-reduction efforts will continue to flounder across Asia and wealthy patrons will turn to subsidising illegal poaching. 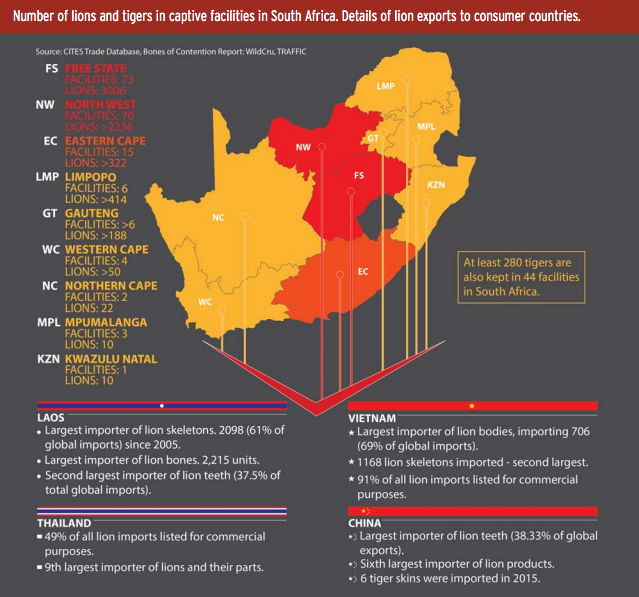 The EIA cited five incidents where Chinese and Vietnamese authorities seized large caches of lion parts from dealers passing them off as tiger derivatives:

The report then targets South Africa’s captive-bred lion facilities, alleging many of the sites covertly farm tigers to be sold abroad – in direct violation of international law.

In a January interview with National Geographic, Debbie Banks, team leader of the EIA’s Tigers Campaign, stated: “There are fewer than 4 000 wild tigers remaining and all governments need to do everything they can to eliminate threats.”

She encouraged the South African government to “take into account the wider impact of the captive lion bone trade beyond its borders” and “issue a zero quota on lion bone exports from all sources”.

The EIA’s report ends with similar conclusions: “It is clear that a legal trade in captive lion parts is unworkable and will likely have a detrimental impact, not only on wild lions but also on endangered wild tigers. The government of South Africa must adopt urgent action to end this trade.”

In essence, to save the tiger, first save the lion.

Data reveals secret to log-topping Lionsâ€™success: Carrying the ball, not kicking it

Tiger population on the rise in Nepal