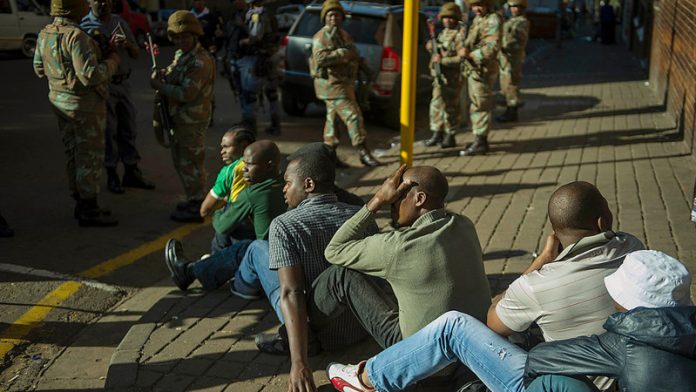 In mature democracies, a period of disorder is usually followed by the “law and order” party’s victory at the polls. Politicians promise a crackdown on crime, and generally more severe measures against anyone they can think of who might be considered guilty — any scapegoat they can find, really. Such campaign rhetoric has usually served conservative parties very well.

Today, on the right end of Europe’s electoral landscape, the “law and order” parties are as close to fascism as it is possible to be without actually donning uniforms and vowing to eliminate minorities. Their ire has been turned on immigrants, refugees and anyone culturally unfamiliar — and they are using the same “law and order” rhetoric to promote an ultranationalist vision of a purified, lily-white volk all marching in lawful step.

Across the Atlantic, Donald Trump mobilised the fear of terrorism, linked it to Islamophobia and white bigotry, and tried to restrict the entry of citizens of several Muslim-majority countries into the United States. How is that different from racist xenophobia? What comes next, in the logical sequence of the argument, is the expulsion of all those who don’t fit into the majority conception of the nation. This is a frequent trope of nationalist visions built on narrow ethnic or raced conceptions of citizenship. Trump’s exact words were: “We don’t want them here.” And, as we know from the trajectory of Nazism in Europe in the 1930s and 1940s, the call to “expel them” can become, as anti-“alien” measures are ramped up, one to “exterminate them”.

So why then is South Africa’s deputy police minister, Bongani Mkongi, giving us a full-throated rendition of the nationalist-xenophobic theme? His comments make those of Zulu King Zwelithini look positively mild. Are Mkongi’s words just more to add to the sequence of calls by police ministers and deputies for the police to “shoot to kill” or otherwise invoke a violent form of “law and order” politics?

It seems not, for Mkongi was not speaking to police personnel, but to the media. Admittedly, his media briefing followed a visit to Hillbrow police station, and what Mkongi saw there, if he was honest, was probably not a pretty sight. But he turned his rage on foreigners, diverting attention from any failings on the part of the public authorities themselves. One has to suppose that a deputy police minister is not going to criticise his own cops, point to flaws in official policy or blame the public — people who may be voting for such politicians in the near future. So what does he do? Blame the makwerekwere.

“How can a city in South Africa be 80% foreign nationals?” cried Mkongi. “[It] is dangerous that in Hillbrow and the surrounding areas South Africans have surrendered their own city to the foreigners … You won’t find South Africans in other countries dominating a city into 80%,” he continued, as if that made us an especially virtuous nation.

He went on, later, to accuse foreigners living in South Africa of using “arms of war”, of hijacking buildings, “taking over power” and conducting “economic sabotage”. Strong words, deputy minister.

When the next flare-up of xenophobic violence happens, what will you say?

The costs include expenditure on security, justice and health rather than on productive efforts, investment is driven away and psychological effects results in lower productivity
Read more
Politics

A fanatic of the free market, Herman Mashaba advances extreme economic policies for South Africa. But he needs political power first, so he rides on xenophobic sentiments for votes
Read more
National

Amid protests by the ANC’s MK Military Veterans, distressed foreign nationals have shut their stalls at a Durban flea market
Read more
Friday