Zama-zamas take their chances rather than starve

He moves swiftly through the damp darkness of the abandoned mine shaft, expertly handling a wheelbarrow. His body is half bent to avoid hitting the low-hanging rock above. The torch on his forehead, held on by an elastic band around his head, is our only source of light. We are fast disappearing into the earth.

I’m following a young man, one of dozens of informal miners, known popularly as zama-zamas, down a coal mine. The air is cold and thin. The ground underneath is uneven and slippery.

The wheelbarrow occasionally hits potholes filled with water, causing a splash. But he doesn’t stop and appears to know the bumps and holes almost by heart.

Time is of the essence. He is heading for the work station to fill up the wheelbarrow with another load of coal. What he earns depends on the number of loads he makes during the shift, which may stretch up to 12 hours.

In his rush to meet his quota, he forgets I too depend on the torch on his forehead for light. He slows down briefly to check up on me when I land in a puddle of water. He offers a brief apology and laughs. We both laugh and move on.

“You see here,” he says in isiZulu, pointing me to a thick log of no more than 1.5m jammed between the ground and the rock surface above. It was put there just a few days before to stop the roof from crashing down. “It was unstable. Little rocks falling. That is a sign the earth could fall.”

A cold chill goes down my spine. We are at the mercy of the earth. The pillar is not very reassuring.

He stops again briefly and shines his light on a pillar made of rocks. This too was put there to stop the roof from caving in. The pillar looks unstable enough to be tipped over with the push of a finger.

We twist and turn through the tunnels for about 50m in the darkness. We can hear animated voices and the incessant thud of pickaxes.

“Aha. Now you can walk straight up,” he says, when we reach an open hall-like space.

Suddenly, before us, figures with lights beaming on their foreheads appear like apparitions. We turn down a wide passage and stop among the more than a dozen figures hard at work. Men and women.

In the flickering lights, I see women collecting coal into used mealie sacks. Men are attacking the walls with pickaxes to extract the coal. Others are gathering it up with shovels. Some men are sitting on a pile of coal, drinking from two-litre softdrink bottles.

One of them sees my cameras. Word goes around. They reprimand my guide for bringing a person with cameras down the shaft. Loud protests ensue. The women are the loudest and fiercest. The message is clear.“Don’t shoot,” they shout loudly, almost angrily. Another man walks over to where we are standing. He wants to know why I have cameras and how being photographed will change his hard life. I can no longer see my guide. Without his torch, how will I find my way out through the darkness?

“We are just trying to feed our children. We are not stealing from anyone. We don’t want to steal and we are not thieves,” says one of the men.

But the work continues and finally I am able to talk to some of the men. I learn that they work here every day for shifts of up to 12 hours. There are two shifts — one from 6am to 6pm and another from 6pm to 6am.

It’s back-breaking work. The diggers can earn up to R450 a day. The wheelbarrow loaders get R150 for 10 loads. The coal is carried from the shaft out into an open amphitheatre-like space outside. The women prefer to carry their coal in mealie bags.

My guide has loaded his wheelbarrow and is ready to head back outside. We follow the same route. He is in high spirits. He won’t tell me his name or let me photograph him. He just wants to support his family, he says. Being in the newspapers could bring him trouble.

We reach the wide, low-hanging space that leads into the shaft. It’s almost noon. We haven’t been down the shaft for 30 minutes but, to my eyes, it seems as if I have just emerged from a lifetime in the darkness of the coal mine. The daylight is blinding. But to the men and women working here, it is a daily way of life.

An easy-going, bearded man is sitting on a pile of mined coal. Next to him are two other men, two women and two children, sitting among their own piles of coal. Another woman further away is carefully packing coal into large sacks. Next to her are two 1400 bakkie, the bodies of which are perforated by rust.

The bearded man is Shoes Dube. He is the leader of this mining operation on the outskirts of Ermelo in Mpumalanga. He serves on a provincial steering committee that’s working to organise informal miners, such as these at the Golfview Mine, into registered co-operatives. 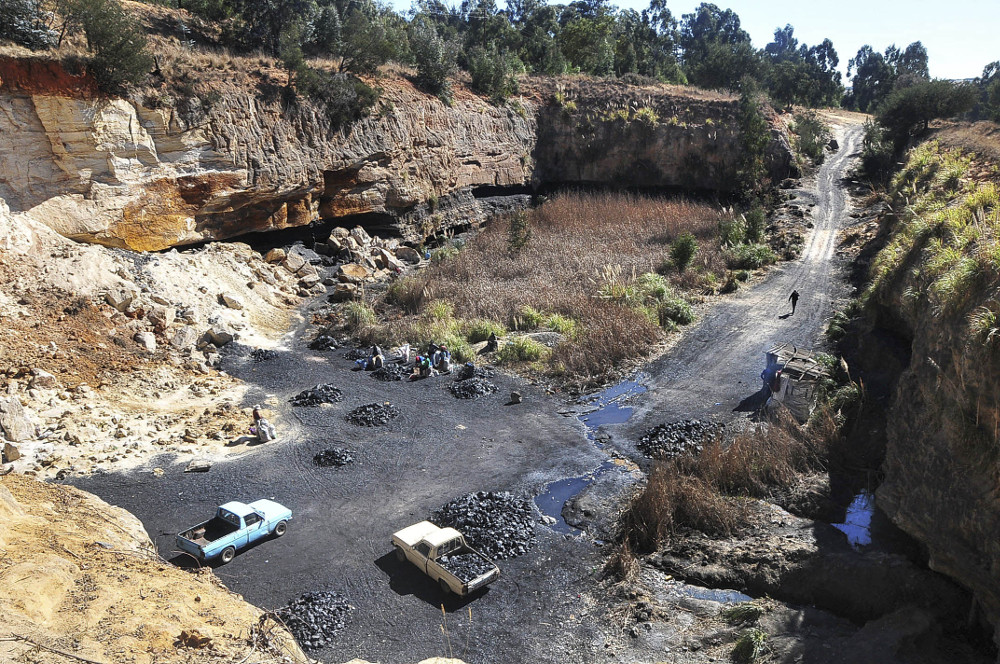 [Jobs: An entrance to the abandoned Golfview mine in Ermelo, where bakkies load the coal brought to the surface in bags and with wheelbarrows. The 23-year-old informal miner (below right) supports his two children from digging and moving coal. Photos: Lucas LedwabaMukurukuru Media]

He says the coal is sold to distributors, who collect it with bakkies and sell it to residents around the town. His speciality is blasting new areas of operation to allow the diggers to work. He has been doing it for the past five years.

He agrees it’s dangerous work. “But what can we do?” he asks with a sigh and a smile.

Last month, there was a cave-in. Fortunately, no one died but eight people were seriously injured. One was left paralysed.

“Poverty is stalking us, my brother. That is our enemy.” 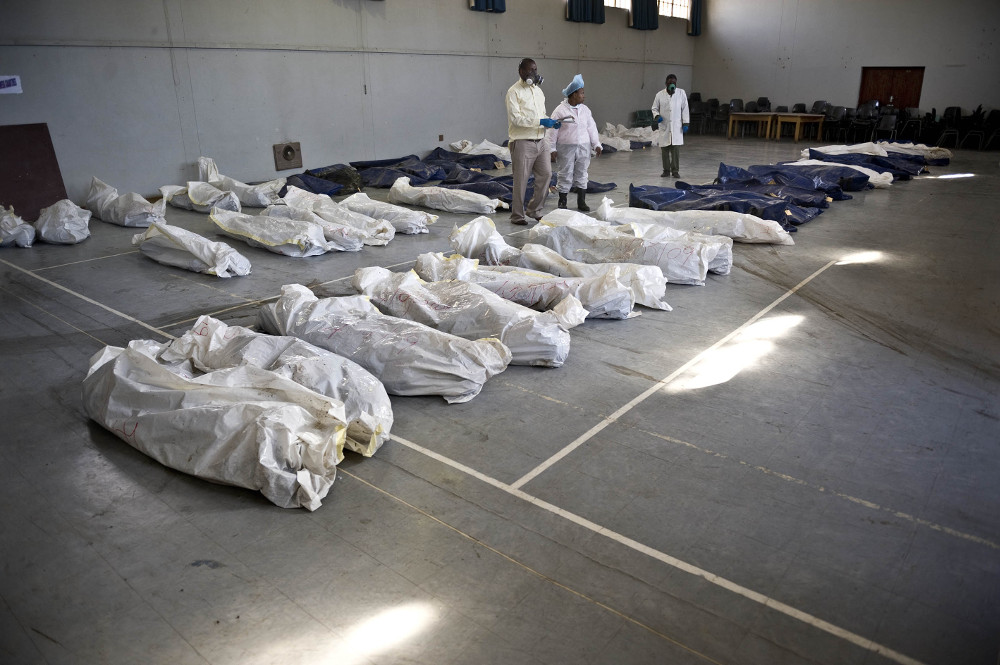 [Danger: Police recovered 25 bodies, believed to be those of illegal miners, from a disused Harmony Gold mine shaft, near an area where 76 illegal miners died in 2009 in what was one of South Africa’s worst mining disasters. Photo: Paul Botes]

There is another potential danger. Gangs can rule with the gun. Turf wars have left hundreds dead over the years. But the violence is confined mostly to illegal gold mining, where the stakes are much higher.

Unlike in the gold sector, where diggers can make hundreds of thousands of rands at a time, the informal coal miners eke out just enough to survive. It is estimated there could be about 3 000 of them operating in the abandoned coal mines of Mpumalanga alone.

The World Bank reported in a November 2013 document on artisanal and small-scale mining that the sector “represents an important livelihood and income source for the poverty-affected local population”.

The institution reported that these operations “ensure the existence for millions of families in rural areas of developing countries. About 100-million workers and their families depend on artisanal mining compared to about seven million people worldwide in industrial mining.”

Artisanal miners are men like Shoes, “subsistence miners who are not officially employed by a mining company, but rather work independently using their own resources”.

Matthews Hlabane, a co-ordinator of the environmental rights advocacy group, the Southern African Green Revolutionary Council, says that although artisanal mining is illegal in South Africa, it plays an important role.

He visits abandoned coal mines such as Golfview to teach informal miners about the benefits of organising themselves.

Hlabane says, if formalised and offered support, they could help the government to rehabilitate mines abandoned by formal mining companies, which often fail to fulfil their environmental obligations once they cease mining.

Although mining companies are legally obliged to rehabilitate mines after the termination of mining activities, most of the Mpumalanga Highveld region remains a scarred, rotten space, dotted with countless abandoned and unrehabilitated mines.

With rising unemployment and little in the way of job creation, people have had to choose between starving or risking their lives down the shafts.

Hlabane says the aim is to organise the miners into co-operatives to help to eliminate conflict between different groups and to minimise their exploitation by crime syndicates.

He says, by organising the miners, it will help them to pay tax, be regulated by the government and improve the health and safety of their working conditions.

Earlier this year, the deputy minister of the department of mineral resources, Godfrey Oliphant, told a one-day workshop on illegal and artisanal mining in Johannesburg that the department was planning to amend and relax some of its conditions relating to the issuing of mining permits to small-scale miners.

But this would only apply to surface miners and not to those working underground, as the department would be sending people to their deaths because of the unsafe conditions underground.

Hlabane says, unlike the big mining houses that exploit local natural resources and take their money overseas, the zama-zamas spend their money locally and contribute to the economies of their communities.

“We want to help decriminalise zama-zamas. They are innocent people who just want to feed their families. They scavenge in the old, abandoned mines. Those who abandoned the mines are the ones who broke the law, not the zama–zamas,” he says. — Mukurukuru Media

Mmadithokwa community shareholders in Tharisa have nothing to show