Wonder where SA’s medically circumcised men are? Now there’s a map for that

New technology is letting South Africa see its men in a new light – and could help keep them and their partners HIV negative.

Studies show that medical male circumcision (MMC) can reduce a man’s chances of contracting HIV through vaginal sex by about 60% — findings that prompted South Africa to commit to medically circumcising about 4.3-million men by 2016.

But only 2.4-million men had undergone the procedure by 2015, according to the latest national HIV plan.

To find the men missing from South Africa’s MMC services, HIV nonprofit organisation  Right to Care began tracing where men were getting medical circumcisions and where they weren’t. Using specially designed mapping software, Right to Care chief technical specialist Khumbulani Moyo and his team plotted information on MMC uptake against data that showed, for example, how many men were eligible for medical circumcisions in an area and how many local health facilities offered the service. 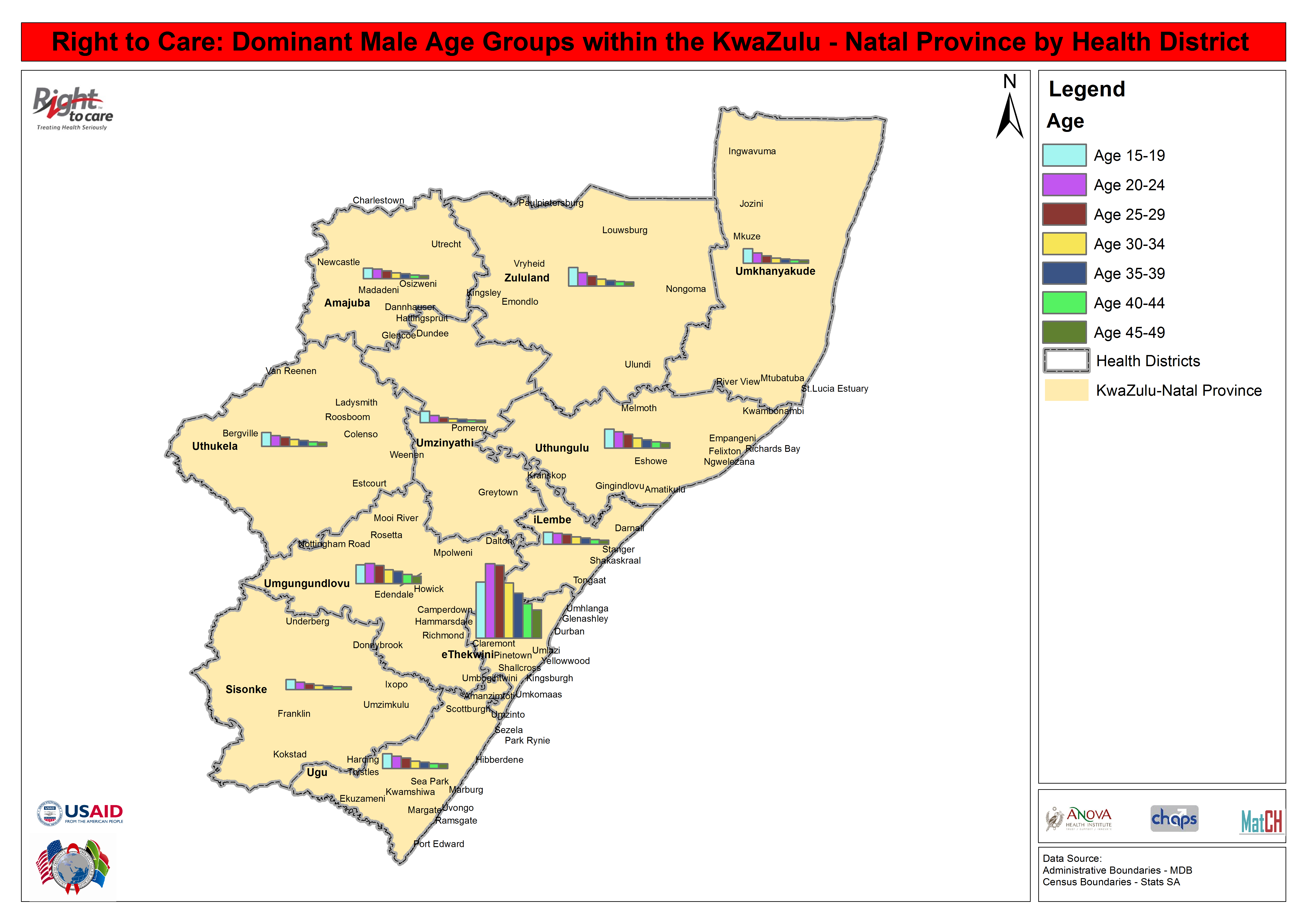 This map shows how many men are in a given target age group as well as the location of MMC services in the KwaZulu-Natal Province.

The end result: A first-of-its-kind map that may finally help South Africa play catch up when it comes to medical circumcision.

Once Moyo and his team find the gaps, Right to Care sends health workers trained to perform MMC to the nearest health facility. Where there is no clinic or hospital, mobile clinics are dispatched. These medical teams are sent alongside community outreach workers that help find leaders in local communities to increase awareness about MMC services. Moyo says the map has helped Right to Care find and medically circumcise men that might have otherwise been missed by national MMC campaigns.

A 2011 modelling study published in the journal, PLOS Medicine, shows that if the country reaches its medical circumcision targets, more than one million new HIV infections will be averted by 2025.

The winter months of April to July are a busy time for traditional circumcisions and, increasingly, medical circumcisions. Moyo says Right to Care saw an almost 40% increase in MMC procedures in 2017 as compared with 2016. The non-profit organisation medical circumcised more than 100 000 men during this period earlier this year.

Help may be just a Whats App away
Zwelandile Benzana is a community nurse at Umnini Clinic, about 40km south of Durban. He says the clinic used to send people wanting MMCs to Prince Mshiyeni Memorial Hospital, which is more than 27km away, before nongovernmental organisations such as Right to Care began providing medical equipment and support for MMC.

He now acts as a bridge between men and traditional leaders to help dispel myths about medical circumcisions and to increase awareness about its benefits.

“We target them [men] by going to local chiefs and speak to them through the chiefs. The chiefs become our voices when they call imbizo (meetings) and they inform these men about circumcision and where they can access circumcision services,” Benzana explains.

Moyo says even the best maps and data are useless for driving demand for the HIV prevention service without local champions such as Benzana.

“If we go there and say we are bringing these health benefits and it’s not community-led, it doesn’t help. You need it to be the means to get to where the community wants it to be, not to tell the community where they need to be”, Moyo explains

The only male nurse at the clinic, Benzana says many men are uncomfortable speaking to women about circumcision and often turn to him for help.

“Some people are reluctant to talk to female nurses about this. As a result, people call me on my personal number, sometimes outside my working hours, to make appointments and I arrange with them to come and circumcise,” says Benzana

Changing times inside and outside clinics
In 2010, Zulu king Goodwill Zwelithini reintroduced circumcision after it had been banned by Shaka Zulu centuries ago. Zwelithini and his son Prince Nhlanganiso Zulu now advocate for medical circumcision.

Zulu has launched a campaign in conjunction with Right To Care called Isibaya Samadoda. Zulu says the campaign aims to create spaces space where men can talk about health issues such as HIV and encourage each other to take responsibility in the fight against new infections.

“The Zulu nation is a respected nation, but our people are dying because of HIV. Men must take the responsibility of stopping new infections. It is painful to hear about young women between the ages of 15 and 24 being infected with HIV, so men need to take responsibility and stop sleeping with schoolchildren,” the prince explains.

A quarter of new HIV infections occur in young women in this age category, according to the  latest HIV household survey conducted by the Human Sciences Research Council in 2012.

“Men who circumcise are not only protecting themselves but also the women in their lives,” says Zulu.

Recent research, presented at the International AIDS Society Conference on HIV Science last month, found that women with medically circumcised partners had a 30% lower chance of having HIV and were also less likely to have genital herpes — itself a risk factor for HIV infection.

As part of the Isibaya Samadoda campaign, Right to Care and Zulu bring together recently circumcised young men at community halls, schools or clinics to talk about notions of manhood and social responsibility.

Zulu explains: “Circumcision is a process of learning so a person may learn how to prevent illnesses. Circumcision is about educating and shaping a young man to be a better man.”