Victims of domestic and intimate partner violence such as Reeva Steenkamp and Karabo Mokoena grab headlines and trigger protests, but the women who stay alive by killing their abusive partners in self-defence are forgotten and misunderstood.

The Wits Justice Project spoke to three women who claim to have killed their violent partners in self-defence. Although they arguably might have been acquitted or received noncustodial sentences, they are serving longer sentences than Oscar Pistorius, who killed Steenkamp.

The waiting room in the women’s prison at the Johannesburg Correctional Centre, colloquially known as Sun City, is everything the men’s section is not: small, cosy and colourful.

There are paintings of potted plants on the walls, vines crawl across to connect each plant with another.

A girl in a pink dress slides across the linoleum floor in the room where family and friends of the women prisoners wait to see their loved ones.

Outside in a courtyard, three brothers kick around an empty plastic packet.

When a warder appears to call out the name of a jailed woman, there is a lull in the conversational din. The three boys trail after their father into the meeting room when their mother’s name is announced.

The meeting room is even cosier. Women and their families sit facing each other on wooden benches and children climb on to their mother’s laps. Sometimes a tear is wiped off a cheek, at other times bouts of laughter bounce off the walls.

Two women warders in department of correctional services uniform sit behind a desk at the entrance. Colourful bags, jewellery and other trinkets made by the jailed women are showcased on a table.

Kgaugelo Magwada is not allowed into the family meeting room yet. Like all other new arrivals, she needs to serve six months of her sentence before she gets to sit close to and touch her visitors. She waits behind a glass partition in a dimly lit space. Iron stools are sunk into the floor on both sides. Magwada lowers her face until it is close to the faulty intercom that produces a faint crackling sound.

In 2014, her only son died when he had an epileptic fit in a bath. “He was 14 years old,” she remembers as her eyes fill with tears. Her partner at that time, a man she refers to as Thabo, was quite close to the boy and initially seemed as devastated as she was about his death.

“But then, one day, I was talking on the phone to a friend of mine and, when I finished, he lost his cool. He accused me of having an affair and started fighting with me. He hit and bit me.”

After the fight, she went to hospital where the doctors treated her for lacerations and bite marks all over her body. She also reported the case to the police, who didn’t investigate her complaint.

In early September 2014, the violence spiralled out of control again. “He came home drunk and started assaulting me as I was sleeping naked in the bed.”

She ran from the bedroom to the lounge in the house they shared in Alexandra. “He blocked the entrance and threatened to kill me. I grabbed a knife to protect myself and I moved to the door.”

Thabo reportedly tried to wrest the knife from Magwada, which she was gripping firmly in both hands. “I couldn’t see anything, because the room was dark, but at some point he moved away from the door and I ran, without any clothes on, into the street. I expected him to run after me and when he didn’t, I returned to the house and saw him lying on the floor in a pool of blood.”

Magwada called the police and an ambulance, but Thabo died before the paramedics arrived. The police arrested her. She got bail until the trial started in January last year.

Although Magwada’s case is seemingly a straightforward case of self-defence, her Legal Aid lawyer never raised it before the judge. The police and the prosecutor also failed to investigate Thabo’s history. Apparently Magwada wasn’t the first woman he had beaten up and, according to Magwada, he had been diagnosed with bipolar disorder.

On February 9, the magistrate sentenced her to 10 years imprisonment. She has applied for leave to appeal.

“First I thought I was a monster for taking his life, but I have come to realise that it was either him or me,” she says.

Interestingly, in a 1976 case that developed legal standards in self-defence, the State vs Motleneni, the accused was also cornered in a house and faced an aggressor with a knife, who had threatened to kill him. Motleneni, however, was acquitted when the judge ruled: “In applying these standards, one must decide what the fictitious reasonable man, in the position of the accused and in light of all the circumstances would have done … the accused believed that the deceased had him cornered and that he was about to stab him, in accordance with a threat uttered that very morning.”

South Africa has one of the highest rates of domestic and intimate partner violence in the world.

Killing in self-defence can be lawful under specific circumstances.

The attack has to be unlawful and it has to be directed at an interest deserving of legal protection, such as life, bodily integrity or dignity.

The defence has to be directed at the attacker and has to be to protect a life, physical integrity or dignity.

Self-defence is considered a subsidiary argument — in other words, the state has to have failed to protect someone against violence.

According to a 2014 report by the Civilian Secretariat for Police on the South African Police Service’s (SAPS’s) compliance with legislation in the field of domestic violence, only 1.4% — two out of 145 — police stations inspected were fully compliant with the Domestic Violence Act.

Neither the SAPS, the National Prosecuting Authority nor the correctional services department keep any records on how many women kill their abusive partners. They declined to comment for this article.

The academic research into women who kill their abusive partners is minimal. In 1998, the Centre for the Study of Violence and Reconciliation published a report, Analysis of Convictions and Sentences for Spousal Killings in Three Gauteng Courts.

In total, they reviewed 169 cases, 39 of which concerned women who had killed their partners, during the period 1994 to 1998. Most women had killed the men in circumstances of abuse. The majority of women had either been acquitted or given a noncustodial sentence.

In 2012, the Gender, Health and Justice Research Unit of the University of Cape Town released a report into women’s pathways into crime and incarceration. Seven of the 55 women prisoners interviewed for the report had killed their abusive partners. One ironically described her incarceration as “freedom”, because her partner’s death meant she and her children were finally freed from his incessant abuse, rape and threats. 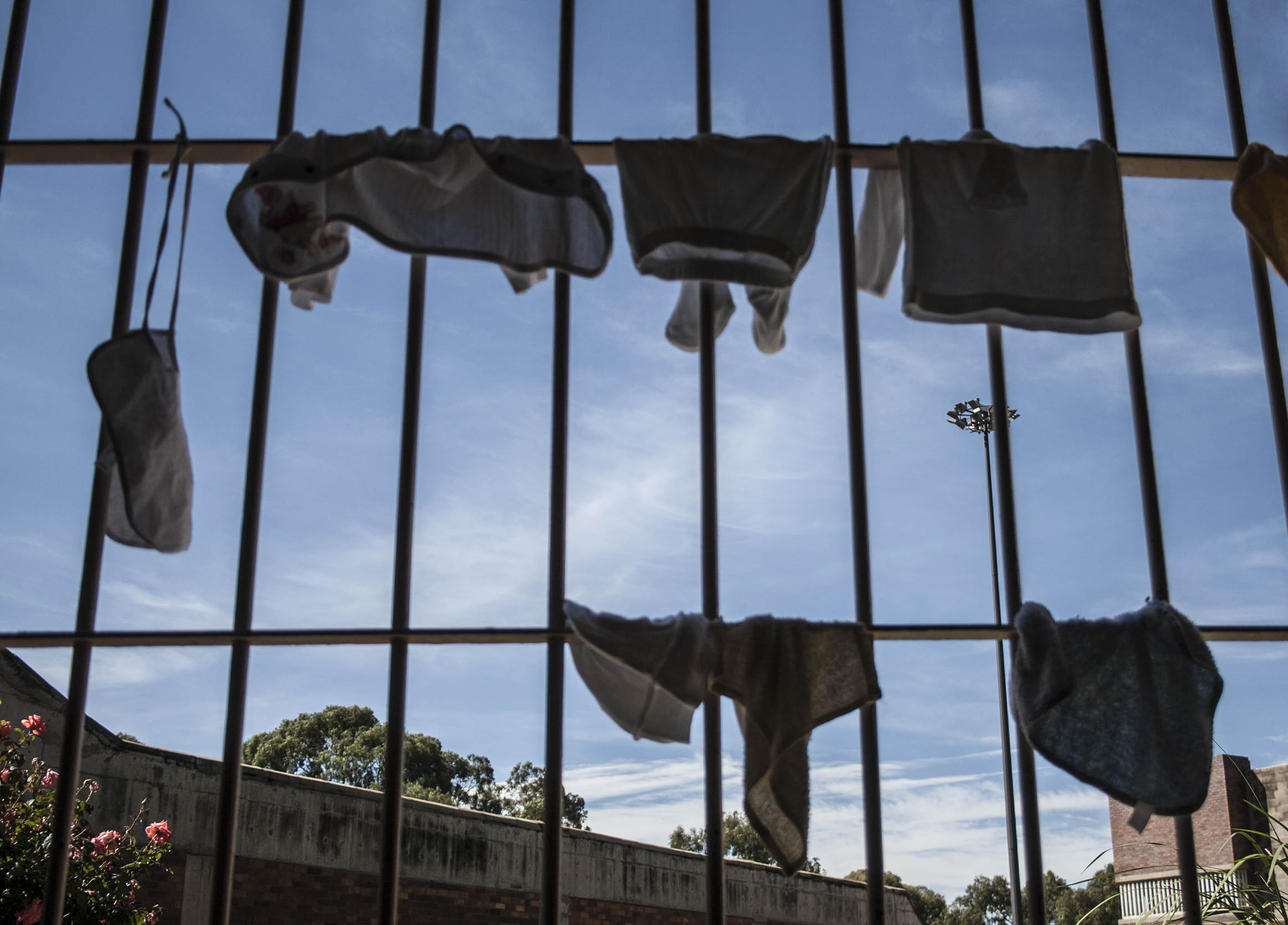 It was me or him

Sabina, who preferred to use a pseudonym, says she reported her violent partner to the police repeatedly. She lifts up her right arm and pushes her prison uniform down to expose a scar running from her elbow to her wrist.

“In 2014, the violence spiralled out of control,” she remembers of her relationship with an unemployed man who had a drinking problem. They shared a house in Alexandra and had a daughter together. “He hit me with firewood all over my body, which broke my arm. When he hit me on my head I lost consciousness.”

Sabina reported the assault to the police, but withdrew the complaint after mediation. The couple got back together again but, two years later, violence returned.

“He started hitting me again and I was such a mess that I lost my job.”

On February 11 last year, things came to a head. “He held a big kitchen knife in his hands and he told me: ‘I’m going to kill you’.”

He lunged towards Sabina, who fought back, pushing the knife away.

Sabina grabbed their two-year-old daughter, who had witnessed everything, and fled the house. Sabina phoned the police, who arrested her.

She was sentenced to eight years.

Sheena Swimmer, who researches gender-related issues and is an attorney at the Centre for Applied Legal Studies, says judges often ignore evidence of self-defence in cases where women have killed their abusive partners. “Very often they claim that the woman could have left the relationship.”

That observation ignores the battered woman syndrome, a phenomenon that is recognised in legislation in many countries. It refers to the mental condition battered women develop, which is called learned helplessness, a form of psychological paralysis caused by the abuse, leaving the victim feeling powerless and depressed and unable to change their situation.

Pulane, who also chose anonymity, knows how that feels. She was arrested and incarcerated in March 2013 for the murder of her boyfriend in Fish Hoek near Cape Town.

“We went away for a weekend and stayed at a wine farm. He saw me hugging the wine farmer as we were leaving and, when I got back in the car, he hit me, accusing me of cheating on him.”

Because he was drunk, they booked into a hotel, where Pulane called the police who, when they arrived, offered her no protection, claiming that they were both drunk and simply had to sleep it off. “I locked him out of the room to protect myself and he slept in the car.

“The next day, he drove like a mad man, threatening to drive into an oncoming train.”

Pulane tried to get out of the moving car, but he grabbed her hair and knocked her head against the window. She passed out. “When I came to, the car was parked and he held a knife to my throat. He was threatening to kill me. I wrested the knife from his hands and stabbed him.”

Again she called the police, but her boyfriend had died before they arrived. She was denied bail because of a previous shoplifting charge and was sentenced to 10 years in jail. Her leave to appeal was refused.

Magwada’s, Sabina’s and Pulane’s cases are all seemingly straightforward cases of self-defence — in all three cases the attack had commenced and was life-threatening.

The more complicated cases of self-defence in abusive relationships involve a planned defence, not an immediate one.

Lisa Vetten, a Mellon doctoral fellow at the Wits City Institute, offers some thoughts on why self-defence was not accepted.

In a contribution to the 2005 book, Global Lockdown: Race, Gender and the Prison-Industrial Complex, Vetten writes that a judge she interviewed said he had rarely seen proper legal arguments and evidence of domestic violence put before him in cases involving women who had killed their abusive partners.

Vetten said a mechanism to review the cases of women sentenced for killing their abusive partner in self-defence is needed to address this miscarriage of justice.

Ruth Hopkins is is a journalist with the Wits Justice Project