When Chinese businessperson Daniel Wong arrived in the Kweneng district of Botswana in November 2015, he excited local councillors and thousands of poor farmers by detailing how they could make millions out of exporting donkey meat and hides to China.

Wong’s proposal to partner the local council in setting up a donkey abattoir was welcomed as a high-value substitute for the loss of the beef industry, which was frozen in 2013 because of recurrent outbreaks of foot-and-mouth disease in Botswana.

With government encouragement, the Kweneng district council approved the opening of Botswana’s first pilot donkey abattoir at Lentsweletau, one of the largest settlements in Kweneng. Because of its rudimentary nature, the local authority referred to the little abattoir as a “slaughter slab”.

Councillors Gaopalelwe Ronald and Saoqho Kotongwa said the abattoir would be a money-spinner and would help farmers to cull the excessive donkey population.

By January 2016, Wong was operating, exporting the hides and processing the meat locally to make pet food. Wong said there were “endless” donkey export opportunities for Botswana because China’s monthly requirement of 100 000 slaughtered donkeys was not being met.

His donkey abattoir in Lentsweletau, which is still running, gave rise to the idea that donkeys could be traded for fast cash, leading to reports of theft and illegal slaughter in Molepolole, Ghanzi and the Ngamiland, which includes the Okavango Delta.

The Chinese demand for donkey hides is “relentless”, according to the Under the Skin report published in January this year by the Donkey Sanctuary, which collaborated on this article. In China, the skins are stewed to produce gelatin, a key ingredient in making ejiao, a traditional Chinese medicine.

Also known as “donkey hide glue”, ejiao is processed into gelatinous bars, pills or tonics, which are used to treat medical conditions that include insomnia, dizziness, nose-bleeding and dry coughs.

It is also believed to be an antiageing agent, in addition to increasing libido and reducing the chances of postmenopausal women developing gynaecological diseases.

Early in 2016, police in Molepolole arrested what they called a “syndicate” of four Zimbabweans and a Chinese citizen in connection with the illegal slaughter and export to Zimbabwe of 1 200 donkey hides. A total of 897 wet and 303 dried donkey hides were found in a truck at a warehouse owned by a Motswana businessperson, who was licensed to export cow hides. He was charged with the illegal slaughter of the donkeys and the illegal possession and export of their hides.

The four Zimbabweans were in Botswana illegally. Their team leader told investigators that, for months, they had bought and slaughtered donkeys at cattle posts in Mabutsane, Kweneng and Dutlwe, all in the Gaborone region, on behalf of Hongde, a Chinese-owned donkey-hide exporter based in Harare, Zimbabwe.

From Harare, Hongde trucked the products to the Mozambican port of Pemba for shipment to China and Hong Kong. The Chinese man, who was not identified in police reports, was found with P230 000 (about R297 000) in cash. He  told police that he was only in Botswana to check why the Zimbabweans had delayed a delivery of hides to Harare.

There is no record of the case going to trial and attempts by Oxpeckers Investigative Environmental Journalism to obtain the case file were unsuccessful. Botswana’s minister of justice, defence and security, Shaw Kgathi, did not respond to questions sent by email.

An official at the headquarters of the justice department in Gaborone said, under normal circumstances, the court in Molepolole would have sent the case file to the department. The file would show when the accused persons appeared, in which court and what the verdict was.

“The case file would also contain information on whether the cargo of hides was forfeited to the state or returned to its owners and allowed to proceed to Zimbabwe. This should be an international investigation to establish the legal status and business of Hongde in Zimbabwe.

“The lack of records shows the whole investigation was unprocedural and lax, if not outright corrupted, given the cash sum involved,” the official said.

A background check by Oxpeckers showed that Botswana has been considering licensing donkey abattoirs since 2000. In 2001, a government-commissioned feasibility study recommended trial donkey meat ex-ports to Belgium, France, Germany, Denmark and other European countries where donkey meat sausages are regarded as a delicacy.

“This could help to stem the country’s growing donkey population, which is believed to be the highest in Southern Africa,” ministry of agriculture spokesperson Mmapula Modise was quoted as saying.

“If this turns out to be a lucrative market, Batswana will also benefit a lot. To some people, donkeys have always been perceived as useless animals. The investors’ main customer will be in Hong Kong, but they will also be exploring other markets elsewhere to maximise their profits,” the minister said.

In February, a record 128 donkeys were slaughtered and skinned in  a week in the Boteti West area near Ngamiland.

Locals told Oxpeckers that, between January and February this year, middlemen representing the Chinese company Y-2K Holdings bought hundreds of donkeys. The animals would allegedly be penned up for at least a week without water and food, in preparation for slaughter by someone from Y-2K.

“The Chinese would come to the villages and leave money with their runners to buy donkeys. Throughout January and February, they returned every Tuesday with a Chinese man who used a hunting rifle to shoot all the donkeys through the head at close range.

“The workers would then skin the carcasses and take the hides. They also harvested genitals from the males,” Toromoja Community Policing Forum member Edmond Mokobi told Oxpeckers.

Y-2K Holdings runners fixed the donkey price at P550 each and pocketed up to P150 in commission per sale. Although the sales and slaughters were arranged with permission from traditional leaders, who provided affidavits confirming ownership of the animals, thieves took advantage of a lack of monitoring to trade stolen animals.

“Although most of the sales were legitimate, many donkeys were stolen from neighbouring and far-flung wards and sold here,” Mokobi said.

Setlhomo Lelatisitswe, the Boteti MP, successfully rallied locals to stop selling their donkeys to the Chinese abattoirs, warning that before long all the donkeys would be wiped out, leaving them much poorer.

“The people would rather be impoverished but with their donkeys than face an extinction of the donkeys. Apart from ploughing, donkeys have many other uses in Boteti. They have been the main mode of transport for centuries and they will continue to be,” Lelatisitswe said.

He criticised the government for failing to consult widely on the effect of the donkey trade on people’s livelihoods. By March, the buying and slaughters had ceased across Boteti.

In its edition of April 9, the online business services publication The Northern Advertiser ran the following advert: “Opening 18 April at BCG Farm NQ14, Tati Farms, Francistown, Bo Chang Group (Proprietary) (Limited) … We are the only licensed company in Botswana for donkey slaughtering. We buy donkeys from Batswana at a reasonable price. If you are interested, please contact us or visit us, Tati Farms along Mathangwane road.”

Six months before the opening, the Bo Chang Group had started to recruit management and factory staff, more than a month before the government licensed donkey abattoirs.

In April, the abattoir started operations with the export of 189 donkey hides. The figure rose to 307 in May, and almost doubled to 588 in June. Neighbours started noticing vultures and the smell of rotting flesh coming from Tati Farm NQ14. 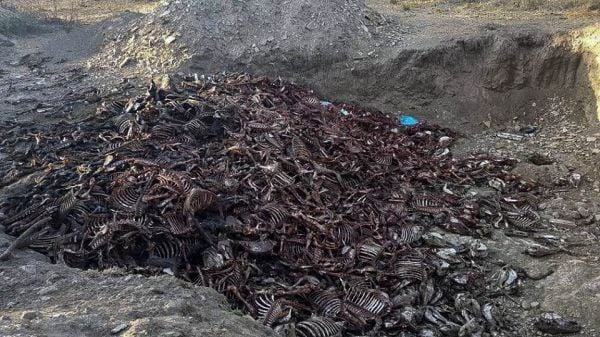 [At Bo Chang, donkey carcasses were found dumped in a makeshift pit (above). At a licensed slaughterhouse in Kenya (below) skins are stacked for export. (Oscar Nkala and Tony Karumba/AFP)] 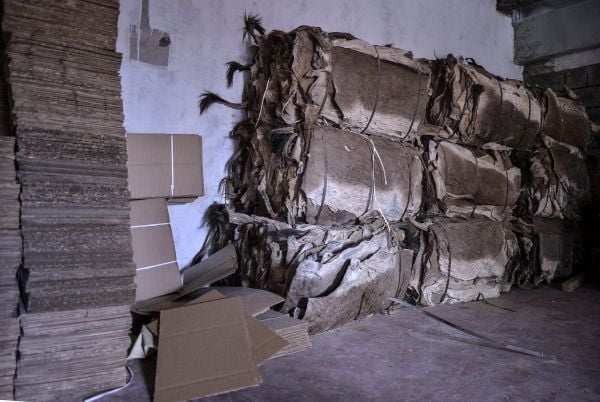 Acting on a tip-off, an interministerial task force raided the Bo Chang abattoir late in June and found 452 starved and emaciated donkeys in pens waiting to be slaughtered.

Hundreds of rotten carcasses were found dumped in makeshift pits, with fluids seeping into the Tati River, a lifeline for the city of Francistown and people living further downstream. Most of the donkeys were put down on humanitarian grounds.

Five Zimbabwean immigrants who allegedly worked illegally at the abattoir were arrested. Of the three Chinese operators, an unnamed 24-year-old man was fined P50 for animal cruelty.

Alarmed by the cruel treatment and slaughter of donkeys at Bo Chang, on June 28 the government temporarily suspended all licences for the slaughter and export of donkeys.

But the seizure of another Zimbabwean-bound truckload of 1 200 donkey hides on a road leading to the Bo Chang abattoir in mid-August indicates that the slaughter of donkeys has not stopped.

“The ban has not stopped the donkey products trade. It has simply gone underground and donkeys are now being slaughtered in the bush,” said one person, who asked not to be named.

He said the temporary ban on the trade in donkey products and increased public awareness are some of the factors driving the trade underground. — oxpeckers.org