Globally, new renewable energy is coming on stream at lower prices than the operating and maintenance costs of some nuclear power stations.

This is according to the World Nuclear Industry Status Report 2017 (WNISR), which found that record low prices of $30 a megawatt-hour and less are being achieved at renewable energy auctions in countries such as Chile and the United Arab Emirates.

This is compared to the average generating costs of $35.50/MWh in 2015 of nuclear power plants in the United States, which represent about a quarter of the world’s nuclear fleet.

The report’s release coincided with news from the United Kingdom that offshore wind power prices are now coming in cheaper than nuclear power.

Renewable energy industry officials have described the numbers as “astounding”, and they come after the country’s National Audit Office found that the deal struck for the Hinkley Point C project had locked British consumers “into a risky and expensive project with uncertain strategic and economic benefits”.

But other developing countries have no such qualms, according to the WNISR released this week. 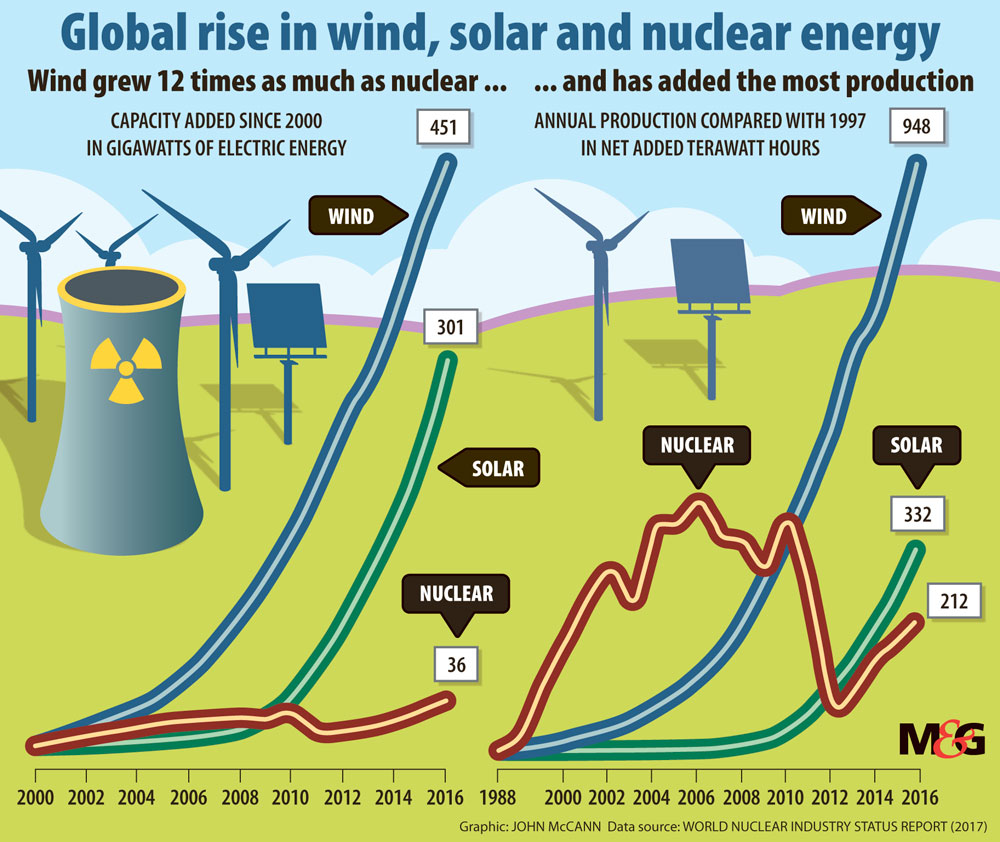 In 2016, China remained the largest investor in renewable energy, spending $78-billion and doubling its solar capacity to a cumulative 78 gigawatts, and it added 20GW of wind power capacity, according to the report. This took its total renewable capacity up to just under 150GW, more than all of Europe combined.

China also added 4.6GW of nuclear capacity in the same year to reach a total of 32GW. The country produced 241 terawatt-hours of electricity from wind, compared to 198TWh of nuclear power.

India is seeing the same phenomenon, the report said, where wind produced 45TWh of electricity, outstripping nuclear at 35TWh.

Globally nuclear power generation increased by 1.4% in 2016, although its share of total power production stagnated at 10.5%, according to the report.

The growth of wind power output was 16% and solar was 30%, with renewables representing 62% of new power generation capacity.

“While no energy source comes without economic costs and environmental impacts, what has been seen clearly over the past decade, and particularly in the past few years, is that choosing to decarbonise with nuclear turns out to be an expensive, slow, risky and potentially hazardous pathway that few countries are pursuing,” the lead authors, Mycle Schneider and Antony Froggatt, said in the report.

“In contrast, some renewable energy sources, particularly wind and solar photovoltaics (PV), are being deployed at rates significantly in excess of those forecast even in recent years, causing production and installation costs to fall even faster than expected.”

The overall amount of money invested in renewable energy hit a peak of $310-billion in 2015, dropping to $240-billion in 2016. But the decline reflected the sharp decreases in production costs per GW of renewables.

According to the report, total renewable capacity installed in 2016, excluding large hydropower, was 138.5GW, up from 127.5GW the year before.

Nuclear energy companies and utilities are also facing a tougher financial climate than ever before, with historically important nuclear vending companies finding themselves in dire straits.

The report referred to the bankruptcy in March this year of erstwhile nuclear heavyweight Westinghouse, owned by Japan’s Toshiba group.

This came after Westinghouse bought a nuclear construction firm, CB&I Stone & Webster, in 2015, which was responsible for two nuclear builds in the United States.

But cost overruns and delays on the reactors sank Westinghouse and saw Toshiba write off $9-billion, threatening its own viability.

Meanwhile, the French government provided a $5.3-billion bailout to rescue the nuclear giant Areva and is in the process of breaking it up, with the state utility EDF taking over its nuclear building and services subsidiaries.

But the rescue plan is in trouble. This week, news agency AFP reported that the Finnish utility TVO is challenging the European Union Commission’s approval of the bailout, because it did not provide adequate guarantees that Areva would be able to complete the construction of a reactor in Finland. It is nine years behind deadline and three times over budget, according to the report.

Areva delisted from the Paris stock market in August, the report noted, and is also facing a quality-control scandal, which led to the provisional shutdown of a dozen French reactors.

European energy utilities — Centric in the UK, EDF and Engie in France, and Germany’s E.ON and RWE — have been downgraded by credit rating agencies in the past year, according to the report. The share prices of RWE, E.ON, EDF and Engie have lost most of their value when compared with their peak in the past 10 years, shrinking by 82%, 87%, 89% and 75% respectively.

In Asia, there are similar concerns, the report noted. Besides the troubles faced by Toshiba, the Chinese utility CGN, which listed on the Hong Kong stock exchange in 2014, has not recovered from a 60% decline in share value after peaking in June 2015.

South Korean utility Kepco’s share price has declined by 37% following tariff cuts, increased operating expenses and the temporary shutdown of four reactors. The election of a new president, who closed one plant and halted the construction of another two, has added to its difficulties, the report noted.