Will Boks be lambs to the slaughter?

If the Springboks were a football team, we would be entitled to wonder what all the fuss was about. This season their record reads: played eight, won five, drawn two, lost one. It seems a little unfair that everyone is harping on about that one loss, but 57-0 has a way of focusing the mind.

Last week, the All Blacks wrapped up the Rugby Championship with a game to spare. Again. They had the luxury of sending something akin to a development side to play the Pumas in Buenos Aires and still won 36-10. Five key players were rested and sent to Cape Town a week early. For no real reason, just because they could.

As was the case in Auckland three weeks ago, New Zealand players and support staff have spent the week talking up their opposition. The difference is that, this time around, no one is buying it. Consequently, Springbok coach Allister Coetzee finds himself in an enviable position: he can send his team to the slaughter at Newlands safe in the knowledge that defeat, which is inevitable, cannot possibly be on the same scale as the rout in Albany.

Or could it? Remember that the All Blacks also scored 57 points in Durban last year, although the Springboks managed 15 points of their own that day. The past three meetings between the two sides have produced an aggregate score of 155-28. That is not the kind of gulf that can be bridged by the usual South African method of stern defence.

Coetzee has acknowledged that an improved defensive effort and a few well-struck penalty goals will not be enough to beat New Zealand.

To be at least competitive, the Boks have to score tries. To do that, according to Coetzee, “we have to be ready for a contest all over the field at Newlands and we just have to make sure we hold on to our possession better than we did in the last game.”

There have been a few Springbok sides since the game went professional that have not understood the value of possession. When Harry Viljoen took over as Springbok coach from Nick Mallett 17 years ago, he was convinced that the biggest problem was the amount of ball kicked away. To that end, he selected a fullback at flyhalf (Percy Montgomery) and instructed him not to kick.

The Boks almost lost Viljoen’s first game in charge because Montgomery followed instructions to the letter against Argentina. Once the Pumas had worked out that the flyhalf was never going to kick, they could attack him with impunity.

When Jake White took over the reins in 2004, he brought a more cerebral process to bear. Ironically, one of the first things he did was to summon Montgomery back from exile in Newport, recognising that his sojourn in Welsh rugby had changed him from a maverick runner into just about the best tactical and place-kicking fullback on the planet.

It took a while for White’s team to hone their strategy, but in the end it was simple — high kicks from Montgomery and scrumhalf Fourie du Preez, chased by Bryan Habana and JP Pietersen (among others).

It can be argued that White’s teams were the kings of disrespecting possession and, indeed, there were times when the wheels came off dramatically. The nadir was the 49-0 defeat to Australia in 2006 in Brisbane, the biggest win by any side in Tri-Nations rugby up to that point. But generally speaking, White’s teams kicked because it was the quickest way to earn territory based on the theory that at least 50% of the time they would get the ball back.

Times have changed and the All Blacks, in particular, thrive on ball kicked deep to a flat-lying back three. It is not true to say that they never kick ball back whence it came, but when they do it is with a far greater sense of purpose than their opposition.

The strength of New Zealand’s line-out, which butchered the Springboks in Albany, means that defensive kicks can be sent into touch with impunity, because possession for the opposition is far from guaranteed at the restart. The Bok line-out was much better against Australia, but that is not to suggest that the problems of Albany have been solved. 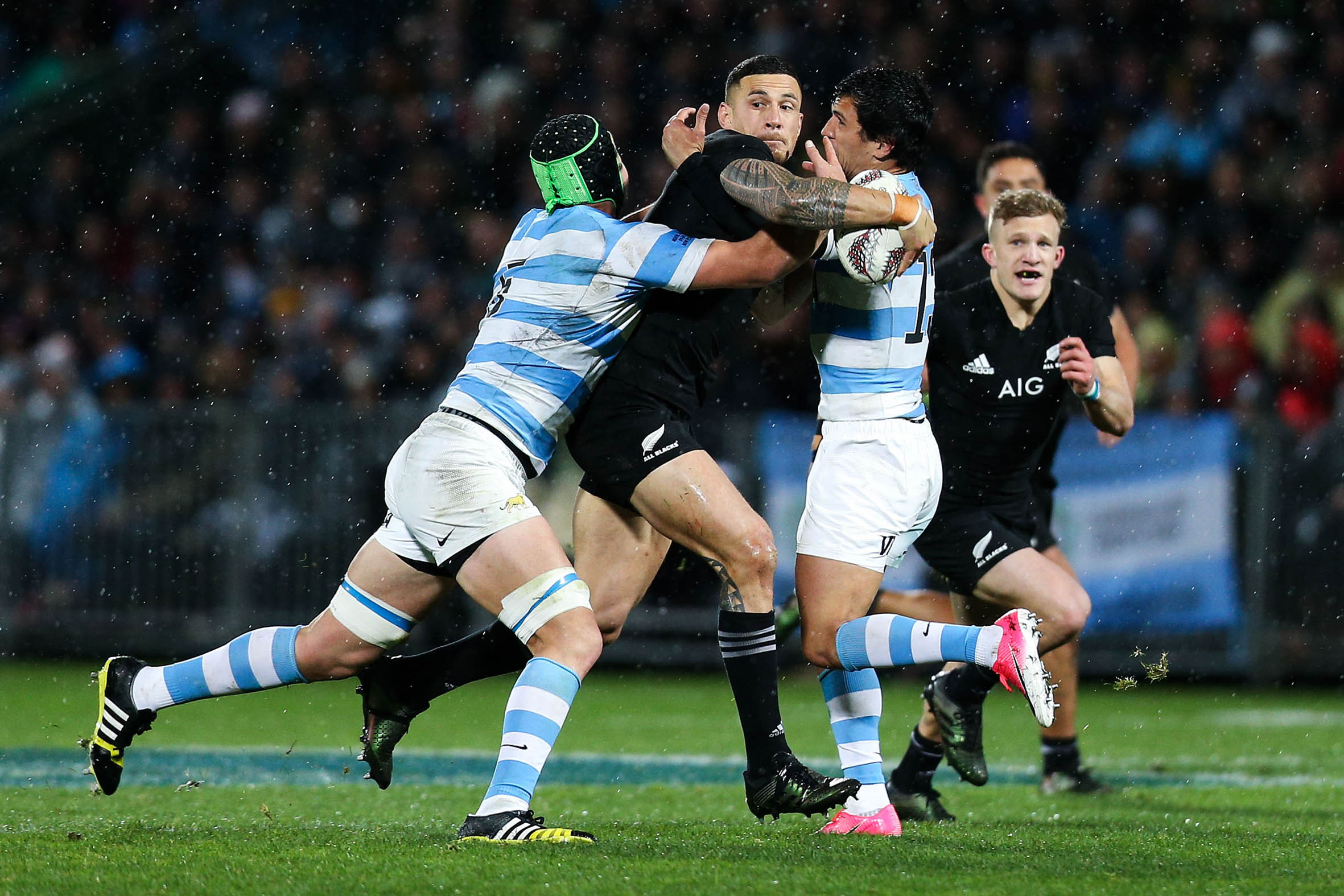 [The Boks will have to be on the ball to counter All Black moves such as the famous Sonny Bill Williams offload (Hagen Hopkins, Getty Images)]

The biggest difference between the sides is the direction of attack. The All Blacks are masters at straightening the line, whether it be with a Sonny Bill Williams offload in the tackle, a Beauden Barrett cross-kick to an unmarked winger, or the identification and exploitation of space from fullback Damian McKenzie.

By contrast, the Boks have found it well-nigh impossible to move forward as a team, relying on individual line breaks that flounder when the player in possession runs away from his support.

Against the Wallabies they were guilty of sending the ball down the backline without breaching the defensive wall with the forwards first. Jesse Kriel, in particular, was guilty of serial crimes against one of the game’s fundamentals — only pass the ball to a player in a better position than yourself. Poor Courtnall Skosan got man and ball at least three times from his outside centre. That’s no way to treat a winger.

The management team would have us believe that process is more important than results at this stage and so the question needs to be asked: What would constitute improvement for the Boks on Saturday? It should be predicated on a 100% return from set pieces, together with a massively more focused kicking game. Keep possession and remember that the object of the game is to carry the ball over the opposition try line. That should ensure defeat is within acceptable bounds.