Dove advertisers can’t wash away the stain of whiteness 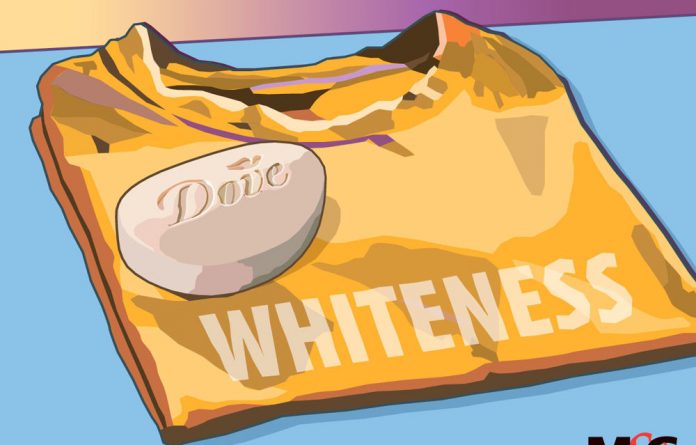 My first encounter with the theory of semiotics was in the English department at Stellenbosch University. I chose a Bacardi Light advert for analysis in my first essay.

A Caucasian woman in a shimmery gold dress sits luxuriantly atop a dark wood piano. Her gaze is a mixture of desire and gentle approval. At whom is she looking? It could be the owner of the two hands hovering above the piano keys. She could also be looking at the bottle of Bacardi Light next to her. The caption implies maybe both. It reads: “Play Bacardi For Me”.

What had this to do with Bacardi Light and its slogan “In good taste since 1962”? I wanted to know why this image had been chosen, what it stood for, who its audience was and the context of its conversation.

I bring this up because I have been astounded by some of the arguments put forward against black consumers’ outrage over a series of images advertising Unilever’s Dove body soap. The four images that circulated last week depict a black woman morphing into a white woman.

One argument, from some social media commentators and from the black model in the advert, is that Dove did not intend to be racist. As the argument goes, black consumers read too deeply into a set of images.

Another argument is that, had the angry consumers looked for more than the screengrab, they would have seen that the white woman eventually transforms into an Asian-looking woman. As this second argument goes, black consumers read too quickly, drawing conclusions without viewing the whole thing.

In both instances, it seems to me that what troubles the critics is that black consumers read the images. How is this a problem?

The lesson I took from semiotics 101 is that advertisers do not discourage “reading”. They try to control it. The idea is to retain authority over the reading so that the meaning is aligned to brand identity and values. This they achieve by being selective in their choice of image and text because they are aware of the contingency of meaning inherent in texts and images. They know that ads are read in context and in contact with histories and ongoing conversations.

I assume the people at Dove know a little about conversations about whiteness. Not race, whiteness. I assume they know their consumers speak about whiteness’s potential for cannibalising (think appropriation), whitewashing (think gentrification) or violent erasure. They know whiteness is not neutral, that it is as unstable as blackness, which the advertising industry is only recently learning to treat with attentiveness.

It is plausible to assume they know all this because their past campaigns show they are attentive to conversations around them. In fact, they have stated that the current ad was intended to carry on that great tradition of social engagement by “representing the beauty of diversity”.

So, it baffles me how, in the intentional process of putting together this set of images, nobody thought to interrogate the ways in which an image of a black woman taking off a brown shirt to reveal a white woman wearing a lighter shirt may be read. Even the image of the white woman who turns into an Asian woman is reckless if you consider conversations about whiteness and its Rachel Dolezals.

Having assumed all of this, I might then say black consumers merely played their part by reading the signs given to them by somebody who (acting on behalf of Dove) failed to read the cultural milieu. I might also say the good people at Dove failed themselves by not engaging with their consumers enough to know that diversity is shallow if assumptions of whiteness’s neutrality remain.

But I cannot be sure if any of my assumptions matter in the industry, so I ask: Whatever happened to semiotics in advertising?

Social media influencers must #ad it

No smoke without fire: Tobacco companies in quiet return to Formula One

Inside advertising: A Q&A with Ahmed Tilly

Ads out of touch with audiences