Kenyan electoral official Roselyne Akombe announced her resignation on Wednesday, barely one week before Kenya is scheduled to host a new presidential election that has been roiled by critical accusations of political bias.

Akombe, one of eight commissioners, released a statement from her location in New York.

“The commission in its current state can surely not guarantee a credible election on 26 October 2017. I do not want to be party to such a mockery to electoral integrity,” Akombe said, referring to the date of the upcoming vote. The official added that others on the panel needed to voice their opposition, as well.

In her Wednesday statement, Akombe said that staffers for the upcoming election were receiving last-minute orders relating to technology changes and the electronic transmission of results.

“The commission has become a party to the current crisis. The commission is under siege,” she said, also saying that it was necessary for “the Commission to be courageous and speak out, that this election as planned cannot meet the basic expectations of a credible election.”

In an interview with the British broadcaster BBC, Akombe said she had fled to New York because she feared for her life in Kenya.

Next week’s presidential vote was scheduled after the Supreme Court in Nairobi nullified the outcome of a previous election on August 8, citing procedural irregularities, and ordered the nation’s Independent Electoral and Boundaries Commission (IEBC) to organise a new vote.

Sitting President Uhuru Kenyatta had won the August vote, earning some 54 percent of the ballots cast. However, in the aftermath opposition leader Raila Odinga successfully petitioned the court to cast out the result, alleging that the electoral commissions’ computers had been hacked. 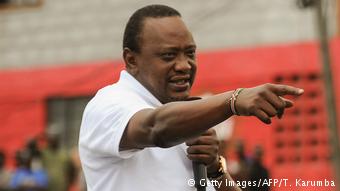 Read more: ‘My withdrawal not to blame for confusion’ Odinga tells DW in exclusive interview

Since Odinga’s appeal succeeded, however, international monitors have urged Kenya not to attempt wholesale change of electoral law with such a short time between votes, arguing that this heightens the chances of another flawed ballot. Akombe’s statement explicitly urged for the postponement of the October 26 repeat election.

Protests from both sides

The East African country, which witnessed severe violence after 2007’s contested election, has been in political turmoil since the August vote. Protests have taken place, with both Kenyatta’s supporters and Odinga’s backers taking to the streets. 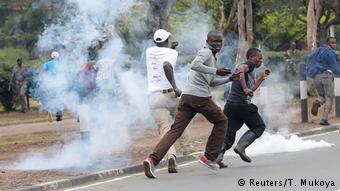 “The lessons from 2007/08 are too fresh, lest we forget,” Akombe concluded on Wednesday.

On Tuesday, Odinga called off daily protests that were intended to demand reforms to Kenya’s electoral system, claiming that he feared fatal police retaliation.

Odinga has taken his name off the ballot in the upcoming new elections. He alleges that the commission has failed in institute necessary reforms to ensure a transparent and legal outcome.

Kenyatta has been in power since 2013. The new election was originally scheduled for October 17 but was delayed due to the time needed for a French company to supply the necessary voting technology.