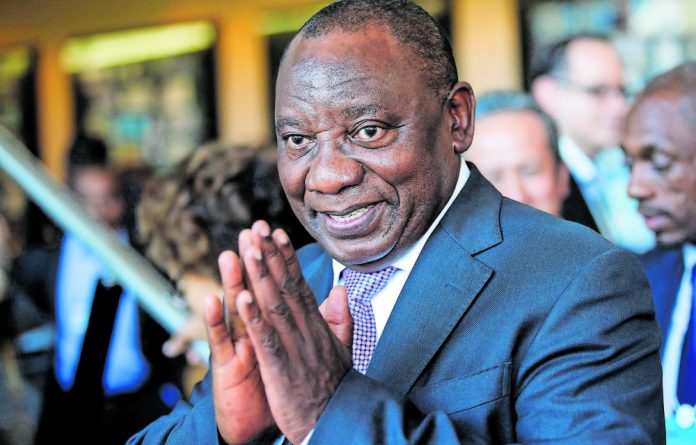 The ANC has slammed presidential hopeful Deputy President Cyril Ramaphosa for pronouncing on his preferred leaders for the party’s top 6 positions ahead of the December elective conference.

The party, in a statement, said it “noted with concern reports of statements made by leaders pronouncing on a line-up of comrades to be elected as officials”.

This after Ramaphosa announced his running mates in Ga-Sekhukhune, Limpopo over the weekend. He told crowds at a #CR17 rally to support national executive committee (NEC) member Naledi Pandor as the next ANC deputy president, former KwaZulu-Natal chairperson Senzo Mchunu as secretary general, and the current secretary general Gwede Mantashe as the next ANC chairperson.

Ramaphosa also named Gauteng chairperson Paul Mashatile as his preference for the post of treasurer general.

“The ANC… calls on all its leaders and members to desist from the practice of pronouncing on and circulating slates which may be seen to undermine the branches’ inalienable right to select candidates best placed to implement the national democratic revolution,” said the party in a statement on Monday.

Ramaphosa has since released a statement saying he notes the criticism on his pronouncement of preferred candidates.

“I see these views in a positive light as a process of enriching and deepening out internal processes and promotion of unity in the ANC,” said Ramaphosa.

He, however, has defended his actions, saying they were based on interactions and nominations emerging from ANC structures and should be understood in that context.

ANC branches are currently holding general meetings to nominate candidates to take over when President Jacob Zuma and his NEC step down in a few weeks.

“The 2015 national general council resolved to outlaw slates and reaffirm the role of the branch as the basic unit of the ANC,” said the party in the statement.

Some people, who are close to the deputy president, have criticised him for pronouncing on Pandor.

An insider said that Pandor’s age could be a great disadvantage against her. While Ramaphosa, in a statement, said: “The views expressed are no means a prescriptive and do not displace the right of branches to nominate their preferred candidates for any position of leadership.”

He also vowed to respect the will and choices of leadership as expressed by branches of the party. – News24

In a statement, Ramaphosa has responded to criticisms of his pronouncement on Sunday saying, “The names I mentioned for leadership positions arose from interactions and nominations emerging from ANC structures and should be understood in that context.

This however does not detract from the importance of, at all times, reaffirming the centrality of the role of branch members as the electoral college for all elective positions in the ANC.

The views I expressed are by no means prescriptive and do not displace the right of branches to nominate their preferred candidates for any position of ANC leadership.”

ANC Deputy President Cyril Ramaphosa’s statement on his pronouncement of Min. Naledi Pandor as his running mate ahead of the December elective conference. pic.twitter.com/db6qQN9B0h

Tshidi Madia
Love & Light•Journalist•decided to call myself a lover of things cause you know.

Eusebius McKaiser: Why the bullshit curfew is seriously dangerous

Anti-democratic creep sets in when the state feels no need to explain its irrational decisions. Is that the type of state we want to live in?
Read more
Coronavirus