In the streets of Madagascar’s capital city, the plague is a ghost. Patients stay hidden away in hospitals or are at home, where some are keeping their illness a secret.

They fear death but, more than that, what happens after death — the anonymous mass grave that many patients believe is their inevitable fate.

The pneumonic plague — a relative of the bubonic plague, or Black Plague, but not exactly the same thing — is a bacterial disease spread from person to person by droplets in the air. It can kill in as little as 24 hours if left untreated. Over the past few months, there have been more than 1 900 suspected cases in Madagascar, and 143 deaths.

But the pneumonic plague is preventable and curable if treated early, according to the World Health Organisation (WHO). The medication is free in Madagascar. Yet many Malagasy refuse to seek help.

“Some people have the plague and they don’t know. They are afraid to go to the doctor because even a simple cough can be diagnosed as plague and people are afraid of that,” says Fanjasoa Ranjavelontsalana (50), a community volunteer.

Ranjavelontsalana has just begun working for the Malagasy Red Cross Society. She hails from a rural area called Ahbohimiadana Sud, which is just outside Antananarivo. 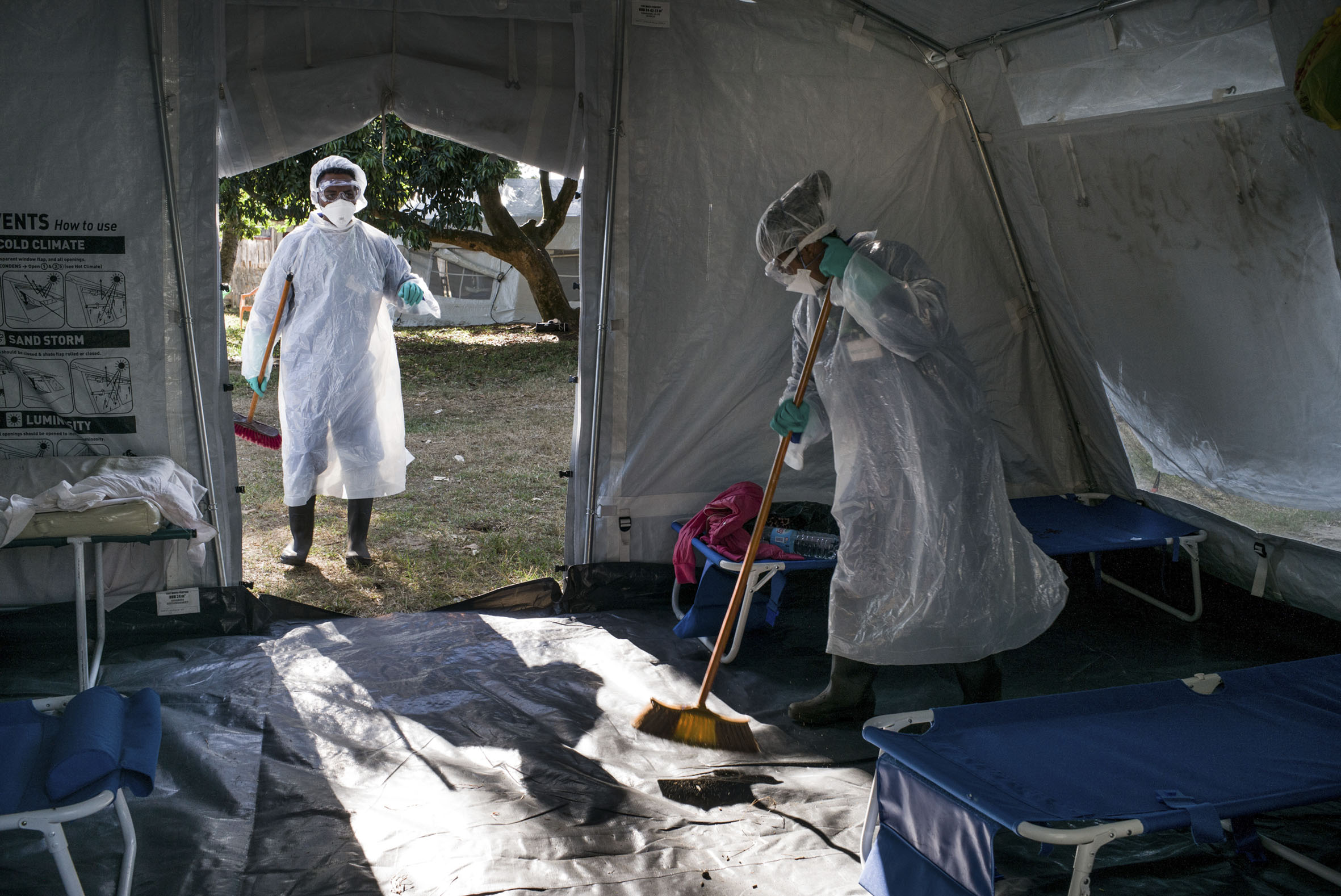 [Workers clean and disinfect tents at a plague triage and treatment centre. (Rijasolo/AFP)]

Already, one case of pneumonic plague has been confirmed in her community and there is another suspected case. There could be others, but Ranjavelontsalana may only find out when it is too late.

Another factor deterring people from seeking help is concern about what happens to their body if they die from the plague.

Funerals here are extremely important: burying the dead is accompanied by a host of rites. Among many Malagasy, there is a custom known as famadihana, when the bodies are periodically removed from the family crypt. Loved ones clean the remains and reshroud the bodies in new cloth. With the bodies of their ancestors readorned, the Malagasy then dance with the dead around the crypt.

But science and culture have collided with a devastating consequence in Madagascar: the Malagasy can no longer perform this sacred rite if a loved one has died from the plague. The government has made this clear.

“If a person dies of pneumonic plague, and is then interred in a tomb that is subsequently opened for the ritual, the bacteria can still be transmitted and contaminate whoever handles the body,” says Willy Randriamarotia, chief of staff for the health ministry.

Antananarivo is scattered with snaking side streets. Colourful block houses and shops are jumbled on top of one another along the pavements. It is a city that appears to have been created by accident. And its healthcare system seems just as chaotic, hampered by a lack of resources. 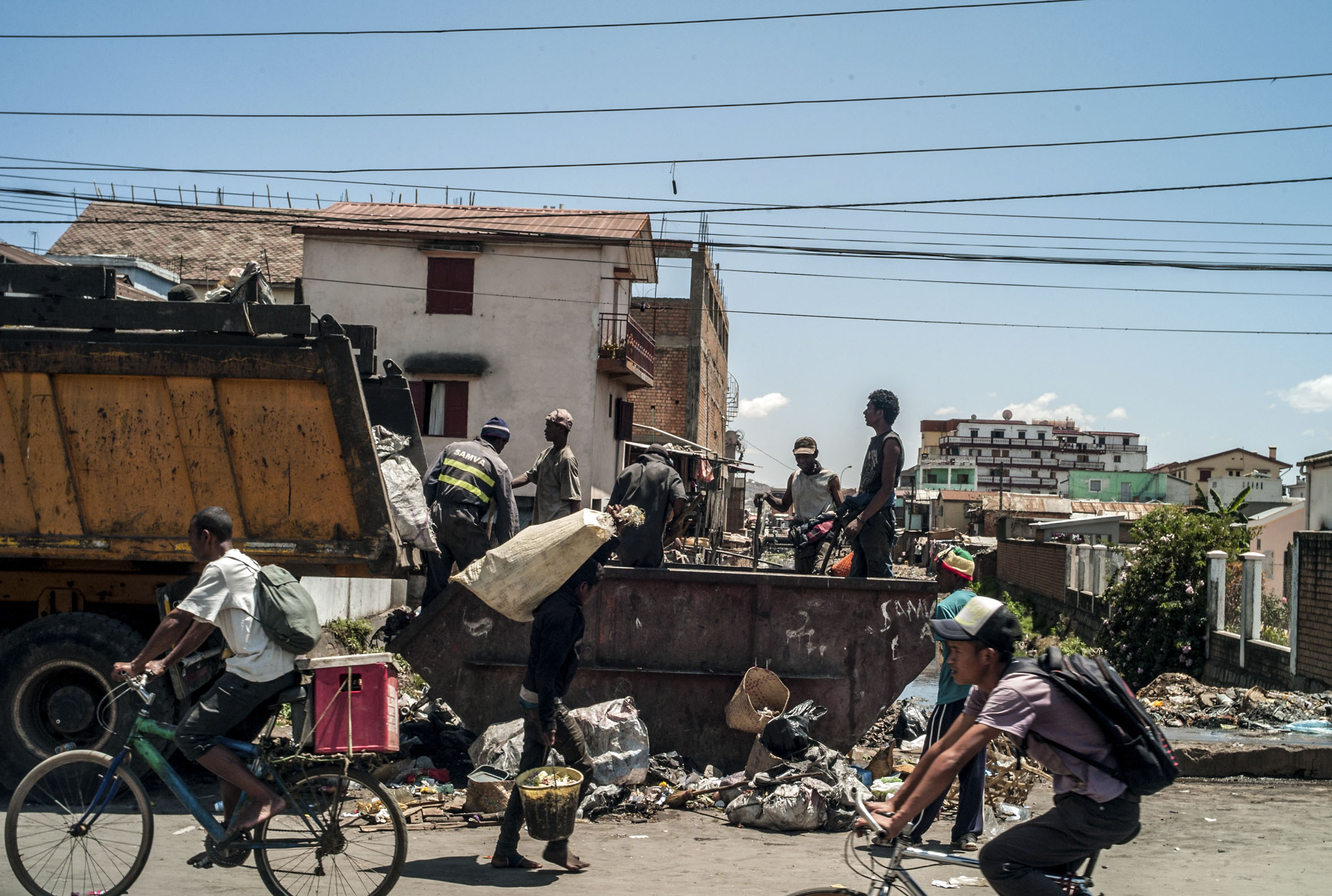 [Over the past few months 143 people have died from pneumonic plague and more than 1 900 suspected cases have been registered in Madagascar. (Henitsoa Rafalia/Anadolu Agency)]

Plague outbreaks are not unusual in Madagascar. But this year, it has struck the capital with unusual force: in this sprawling city there are 194 wards known to be infected with pneumonic plague for the first time in their history.

Controlling this urban outbreak is hard enough — but the sensitivities about what to do with the corpses makes it even more difficult.

“The problem you have now among communities in Madagascar is that most families don’t want to give back the body. The police come to take the body. This is terrible. It is really terrible,” says Charlotte Ndiaye, the WHO representative in Antananarivo.

The WHO and the United Nations Children’s Fund (Unicef) have supplied the Malagasy government with body bags that can be sealed to keep the dead safely contained.

Unicef is also paying hygiene officials employed in the regional government’s water and hygiene departments to help to disinfect the dead.

“It’s an extremely sensitive question in Madagascar because it is a fundamental part of Madagascar culture, so there is not yet any official circular with what to do,” says Jean-Benoît Manhes, the deputy representative of Unicef in Madagascar.

The lack of an official plague burial system does not mean no method exists. Bodies of the dead are tested and, if they are even suspected of being pneumonic plague victims, a hygiene officer will come bearing chemicals, such as a chlorine solution, to kill off any bacteria.

The body is then placed in a sealed body bag. But the grave in which it is buried is nothing like traditional family tombs.

“When someone dies from plague the office of hygiene comes to your house or hospital, takes the body and prepares the body in order to put the body in a common grave,” says Ndiaye. “For Malagasy tradition, it is something very difficult to accept.”

It remains unclear how long the bacteria survives in a corpse. Manhes says that not enough studies have been done to conclude how long bacteria stay alive in a cadaver, but that a dance with the dead may be less contagious than a dance with the living.

“Dead people are less contagious because they don’t move. But they are still contagious if you touch their fluids,” he says.

In the Malagasy Red Cross Society, Izaka Rabeson has been working throughout the weeks to combat the plague. The Red Cross runs one of three hospitals in the capital that has a dedicated unit for plague victims, he says.

What has struck him is that this disease, so easily treated with antibiotics, has been allowed to violate the sanctity of a dignified burial. Some family members, he says, have even gone as far as attempting to steal the bodies back.

“What’s shameful about this epidemic is that we can cure plague. And that’s what we are trying to do,” he says wearily, sitting in his office in the city.

A disease that haunts

While the world gasps at the horror of a plague epidemic on the island nation, life in Antananarivo carries on as normal. There were a few weeks of disruption when school holidays were extended, but now schools have reopened. Health workers remain vigilant, but it is believed that the epidemic is slowing down.

The plague is not obvious. There are no people wearing surgical masks to protect themselves. The only place where these can be seen is at the airport, when nervous tourists — including one American spotted with a cheetah-print design — arrive wearing them.

Even behind closed doors, the disease is kept in the shadows. The sick won’t speak for fear of a fosse commune (literally translated is a pauper’s grave), and the cured won’t talk because they are afraid their neighbours will treat them like outcasts. They are all haunted by a disease that will condemn them to an unsanctified burial.

But Manhes said the responsibility should fall squarely on the ministry of health to come up with a dignified burial method. As yet, the government knows the magnitude of the problem and it is reluctant to take control, Manhes says. Unicef has submitted a potential burial protocol and is awaiting feedback.

“No one really wants to take responsibility [for issuing a final regulation on burials]. We have communicated with churches, with the health services, but it should be the ministry of health after global consultations with all actors,” he says.

Ranjavelontsalana helped to save the life of the man in her community who became ill. He prays with her in her church and thanks her for her help in raising awareness of how plague can be treated.

Even though the plague is curable if treated quickly, she says people have one fear: “They believe they will die. They are especially afraid of not being buried in the same family vault. It is sacred for Malagasy to be buried in the same place.”