In rural southern Madagascar, the battle against a devastating drought is fought by women. They walk long hours to a dry river bed, where they must dig for water. They have been doing this for years, part of the increasing toll climate change is exacting on vulnerable communities in this arid area.

Tovoe has never known her surname but she knows the route to the Mandrare River well. Since she was 10 years old, she has walked the three-hour distance with a large empty plastic container in her arms, her mouth dry.

In the region of Amboasary Sud, near the southern tip of the island, many villages rely on this river for their water. But it has begun to dry up. In the dirty sand, there are patches of brown water. It is all that remains of a once-flowing river, which began to dwindle when rainfall started decreasing. In 2013, a drought was officially declared. By 2016, the El Niño phenomenon, which causes warm water to build up in the eastern Pacific Ocean and changes rainfall patterns, was in full swing. What little water was left all but dried up.

“The land is so dry we don’t have anything to do. Before, we farmed cassava and sweet potato, but now there is nothing, so I sell my wood,” Tovoe says.

The vegetables are staples in Madagascar. Tovoe and her family have a small farm in their village, Belitsary, but it no longer yields much food.

So, on the days when she doesn’t collect water, she walks to a forest, where, wielding an axe, she cuts down trees from morning until evening. She sells the wood at a market for 1 000 Malagasy ariary (MGA) (about R4.30) per bundle.

Her husband died several years ago and she is on her own. But the income is enough to buy food and send her children to school.

“My dream when I was a child was I wanted to study. But my parents didn’t have money. They didn’t support me going to school,” she says, as she stands at the river.

Collecting water is a task reserved for women. Men often stay at home, waiting. In times when they could plant crops, they would work on their farms, which have yet to recover from El Niño.

Tovoe’s family is typical of many in the region. She was the eldest sibling in her family and from an early age she had to work. She started harvesting wood when she was 10 years old. 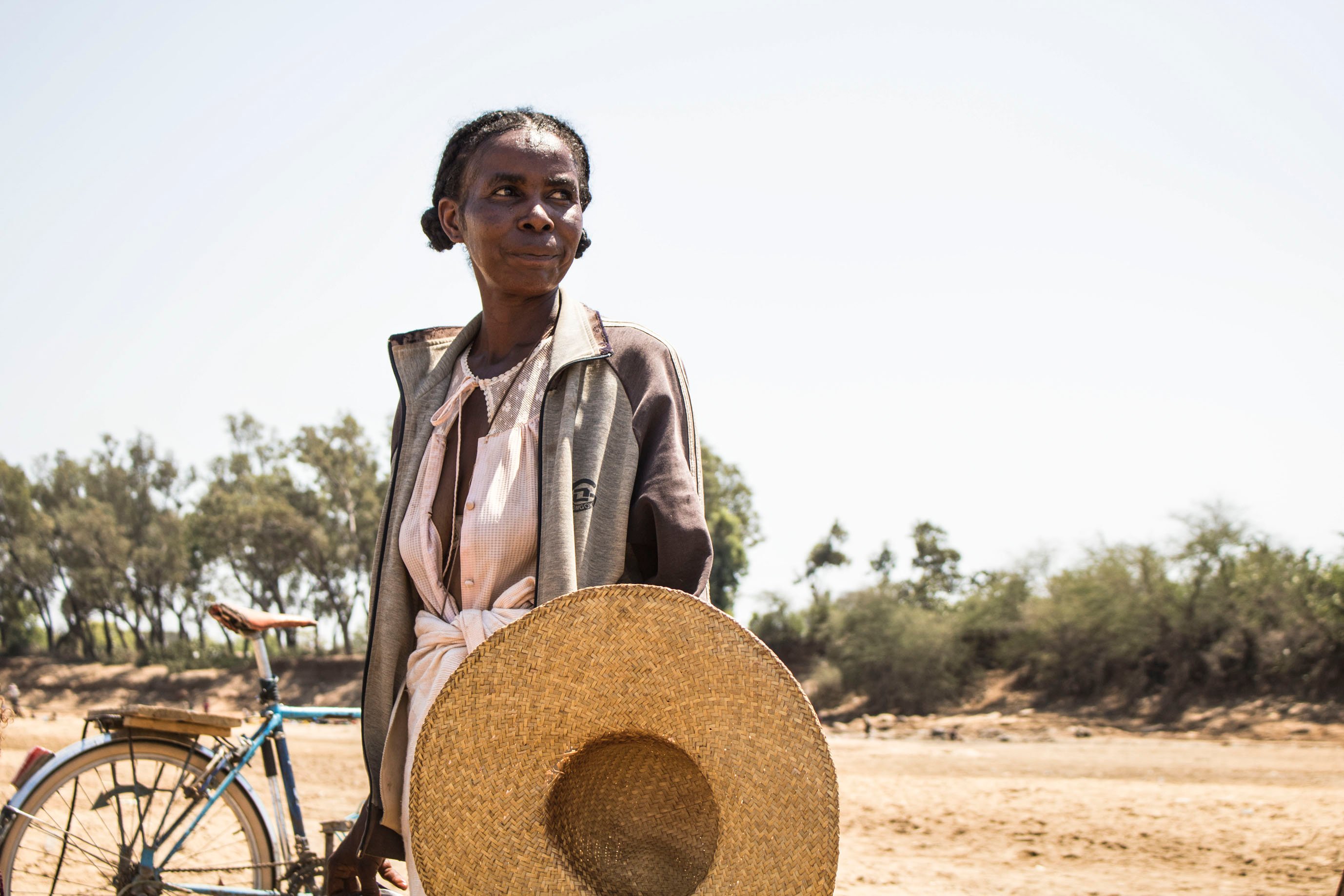 [On the days when she doesn’t collect water, Tovoe cuts down trees to sell the wood at a market, a task she has performed since she was 10 years old (Ra’eesa Pather)]

She was married off young so her family had one less mouth to feed.

Child marriage is illegal in Madagascar but aid agencies such as the United Nations Children’s Fund (Unicef) have noticed that young girls are married off as a way of coping with poverty.

According to government statistics in 2012, 50% of all Malagasy women aged 20 to 24 were married before they turned 18. Many become pregnant when they are only 14.

Because people accept child marriage, it is difficult to prohibit it.

“It seems simply absurd to people to make that change. The cultural concept of what is an adult is different to the West. In many countries, children take on adult roles much younger,” says Nicolette Moodie, Unicef’s chief of child protection in Madagascar.

From these young marriages, large families are born. Tovoe has 10 children in her house — six boys and four girls. The youngest is one year and four months old and the eldest is 20 and recently began junior school.

“My life is so different from my mother because now I take care of my children and send them to school,” she says.

Tovoe collects 20 litres of water at a time, which has to last her family for the next day, when she will be chopping wood. The water is boiled for cooking and drinking. Laundry and washing has to be sacrificed for long periods.

In Madagascar, 91% of the population earns less than $2 a day. The drought has exacerbated the prevalent poverty, and now 47% of children under the age of five suffer from chronic malnutrition. According to Unicef, this will stunt them physically and mentally. After the age of five, the damage is irreparable.

The Malagasy government’s ministry of population says initiatives to minimise the effect of drought over the years were “scattered” and ineffective. It is now trying to make changes in the face of an emergency, including helping aid organisations and international donors, such as the UK’s department for international development, to target communities that need to be prioritised.

Health workers are bringing primary care to areas that are generally difficult to reach. 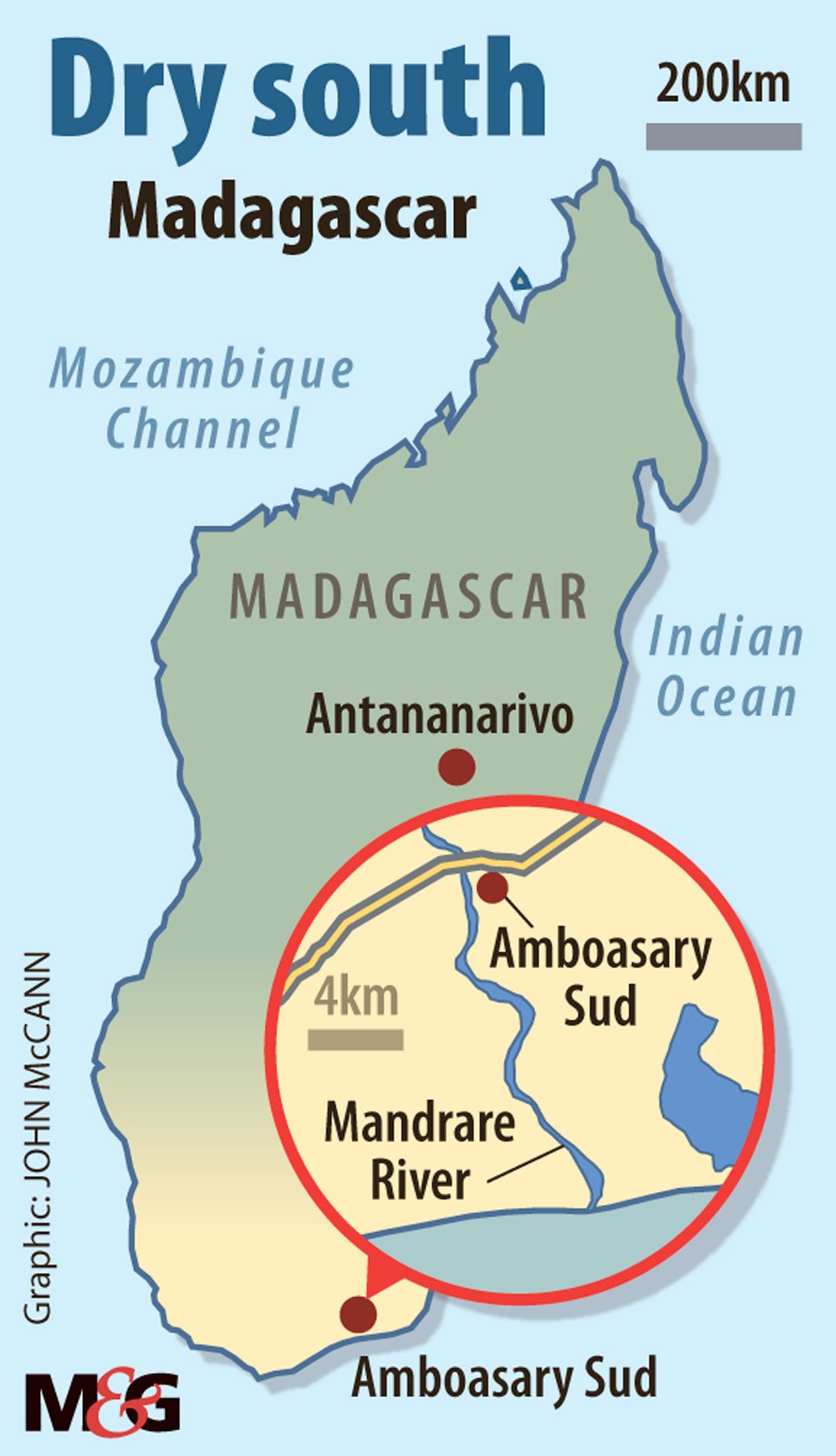 Ranavoarivony Ihaingo travelled 1 000km from Madagascar’s capital Antananarivo to set up a clinic in the Ampasindava village, which is also near the Mandrare River.

Ihaingo was born and raised in Antananarivo. She lived in a double-storey home with three bedrooms and running water, but she left it because she knew how badly doctors are needed in other parts of the country, and particularly in villages.

By being there, patients “avoid long kilometres to reach a health facility, and that is the best thing I have brought to the people”, she says, sitting in her outdoor clinic.

In a day, Ihaingo will diagnose and treat 40 young children aged from six months to four years. On a hot Wednesday afternoon in November, she has already seen two children suffering from malnutrition.

In some communities, the Malagasy government, with the help of foreign donors, has set up a cash payment system. Last year, families could receive 60 000 MGA (R254.66). After a cyclone earlier this year brought some relief, that amount is now 30 000 MGA (R127.33).

According to Unicef, women spend money more responsibly than men do to help their families, which is why the women are issued with cards on which the amounts they are paid are recorded.

It is one of the initiatives funded by the World Bank, which pumped $35-million into the project.

But it hasn’t managed to reach every community. In Ampasindava, Ihaingo has heard of the system but her village is not yet part of the project. She believes it will help families to buy food, although the most pressing need is more difficult to solve.

“The government has to bring water here,” she says.

There are just two tanks of clean water, supplied by Unicef, in the community. One is for Ihaingo’s patients, and the other is for pregnant women and young children.

When she arrived in Ampasindava, Ihaingo had never known what it was like to be without water. The village also introduced her to a world of women she never knew existed.

“I have admiration for the women here. They are very courageous. Of course, they didn’t go to school like me but they are strong. They walk seven hours just to get water for their children,” she says.

The Malagasy government has validated a policy to end child marriages and Unicef has also begun work on a pipeline that will deliver water to an estimated 4 600 people by the end of 2018.

But, in these little-known villages of southern Madagascar, the burden will still be on women and children to ensure survival until water becomes more readily available.

“I am lonely in my work,” says Tovoe. “I need something good from my children. When they are successful, maybe they will reward me.”