After a meticulous case was argued by Michael Komape’s family — about why the state was liable for the family’s pain and suffering, grief, trauma and loss of income — after their five-year-old son fell into a pit toilet at school, all the state could say in response was that the Limpopo department of education had arranged counselling for the family and assisted with funeral arrangements.

Michael died in 2014 when he fell into a pit toilet at Mahlodumela Primary School outside Polokwane and drowned in faeces. His family, assisted by advocacy group Section27, sued the Limpopo department of education and the department of basic education for R3-million in damages.

In the first week and a half of the trial the Limpopo High Court heard extensive evidence from the family and experts detailing how Michael had died choking on faeces, the terrible state of the toilets at the school, the repeated attempts to get funding to build new toilets and of a provincial department that mismanaged its money.

In answer, the state called four witnesses, some of whom in cross-examination could only answer with “no comment”. The last witness was a chief director in the provincial education department, Makoma Rasekgala, who was on the witness stand for not more than five minutes.

She testified that, after learning of Michael’s death, former MEC Dikeledi Magadzi and then administrator Mzwandile Matthews “came to a conclusion that the department must buy food for the family for the funeral”. The department bought food worth R8 000.

But the family’s counsel, Vincent Maleka, said Rasekgala’s evidence was unnecessary because the department had already paid for funeral expenses. Last week, the state paid the family just over R100 000 in a partial settlement agreement and this included R34 000 for the funeral.

Earlier, the state called the supervisor of social service providers in the Capricorn district, Reina Molapo, who testified that the Komape family had received five counselling sessions. But she could not provide records of these, saying she had not been told by the state’s lawyers to bring them to court. 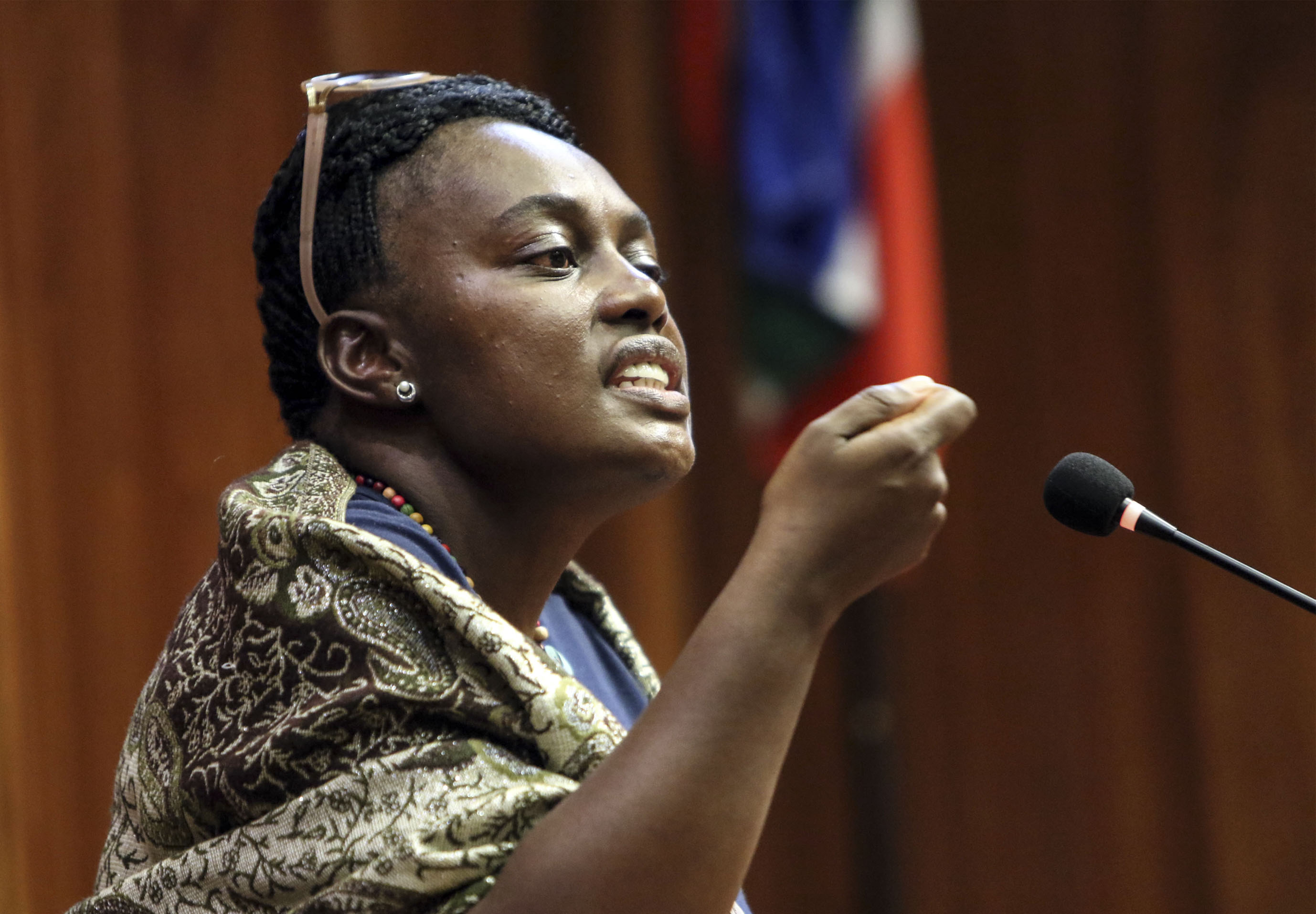 [Reina Molapo, supervisor at social services in the Capricorn district, failed to provide proof of having counselled the family. (Antonio Muchave/Images/Sowetan)]

Molapo said the first two counselling sessions were offered by her, and that she provided the first session two days after Michael’s death. But when pressed by Maleka about what kind of counselling she had provided to the family, and why Michael’s mother Rosina had testified that she had never received any counselling from the department, Molepo took offence.

She told the court that in her 20 years of being a social worker and supervisor she had never lied. “I understand the principles of my profession. I would never lie and say I visited your place if I didn’t. That would be unprofessional in my position,” she retorted.

She also said she was not sure what Rosina or Maleka’s understanding of counselling was but she had provided counselling to Rosina.

Maleka asked her how she had found Rosina when she visited the family home. “She was shocked. She was quite hysterical and very tearful, tearful and emotional. It was just not easy for her to accept and to understand on that particular day of what had really happened,” she said.

“What did you do that now you were confronted with a situation of a mother who is hysterical, who is struck by disbelief and who is tearful?” asked Maleka.

“We comfort, you know,” she responded.

“That’s all you did. Comfort?” he asked.

“Yes, I comforted her and then gave her a tissue and the reassurance that ‘You know mama, accidents do happen’,” she answered.

The state also called Freddy Mabidi, a financial administrator at the provincial department who has worked there since 1996. In some instances Mabidi could not respond to questions posed to him.

When asked by Maleka to explain underspending by the department and projects not completed, Mabidi simply said : “No comment.”

“You were called as a witness to give clarity,” Maleka reminded him.

Mabidi failed to respond to detailed questions about the department’s budget. In many questions put to him, he conceded, including to the suggestion that underspending by the department meant it could not fulfil its promises to schools such as providing better sanitation.

He also agreed with Maleka when he suggested that Michael’s death was not because of lack of resources but because the money allocated for infrastructure was not used better.

In the 2012-2013 financial year the department had received R940-million from treasury, ring-fenced for infrastructure, and underspent by R311-million.

“A fair conclusion to draw is that the programme of infrastructure could not be met, not solely because there was no money — money was there, but underspent,” suggested Maleka.

“That is a fair way of looking at it,” responded Mabidi.

Maleka ended his cross-examination by saying “unsurprising”, after Mabidi had failed to answer another question about the state of the department’s finances.

The former principal of Mahlodumela Primary School, Maphalane Malothane, testified that after Michael’s death the school received desks and chairs as a donation in Michael’s honour, but the school did not tell his family.

“You accepted the donations without even trying to find out what was the view of the family?” asked Maleka.

“I did not go because I had my reasons of not going to the family,” responded Malothane.

She told the court that she was afraid of the family and had stopped going to their home.

“You mentioned a number of occasions when you had gone to comfort the family, so you were not afraid of going then?” asked Maleka.

“That was before they said that we are the ones who killed Michael,” she responded.

She also told the court that she had approved a mural of Michael to be painted on the school’s wall in his memory but she had again not told the family.

Malothane also testified that she started writing letters to the provincial department of education in 2004 requesting new toilets. She wrote again in 2005, 2008 and 2009 and never received a response.

The school then decided in 2009 to use its own money and built four corrugated iron pit toilets as a temporary measure. One of these was the toilet into which Michael fell and died.

Maleka asked Malothane whether she had gone back to the department after 2009 to ask for permanent toilets. She said she had not.

“I suggest to you that, [with] those temporary toilet structures, which we would argue became permanent toilets, the death of the learner such as Michael was a mere accident waiting to happen,” said Maleka.

During cross-examination, Maleka had also asked Malothane whether she would have allowed her own children to use the school’s toilets. She responded: “No.”

The state did not call any witness who would tell the court why safe and usable toilets were not built at Mahlodumela Primary School, why the letters asking for toilets to be built were never answered — or whether the department simply had no money to build the toilets.

The legal teams will go back to court in February, when they will present their closing arguments before Judge Gerrit Muller.

Toilets still in a bad condition in rural schools

Nongovernmental organisation Equal Education, a friend of the court in the Michael Komape damages claim, this week released a report titled Schools Without Dignity, which looked at the state of toilets in 18 rural schools in Limpopo.

Equal Education has been campaigning for proper sanitation in schools and was instrumental in ensuring that the basic education minister, Angie Motshekga, released the norms and standards into school infrastructure in 2013.

In its new report, Equal Education said it had visited schools in Ga-Mashashane in the Capricorn municipal district in July.

According to the norms and standards, every school should have been provided with some form of sanitation by November 29 2016. In the schools they visited this requirement had technically been met. The report reveals, however, that toilets are in a dangerous state in many primary and high schools. Out of the 18 schools it visited, 11 still use pit latrines. Some of the schools had toilets that had no doors, or the doors could not close.

“Perhaps the greatest breach of privacy is when learners find that the toilets available to them are unusable, and must relieve themselves in the open,” reads the report. One of these was Seipone High School.

The report revealed that at Madenathakga Primary School pupils used broken desks to attempt to prop the doors closed.

“The doors are not able to close completely. The only other toilets available to learners are very old pit latrines constructed of mud. They are crumbling and covered in rubble, and appear not to have been used for years,” reads the report.

It also revealed that some toilets had no partitions between them, mud toilets had collapsed or were collapsing after being built by residents many years ago, and some were full of human waste and thus unsafe for use.

“Of a total of 262 toilets in the 18 schools, only 59 toilets are in a usable condition. What was apparent in some of the schools we visited is that new, ventilated, improved pit latrines had been built within the last 10 years. At a distance, the latrine blocks looked new, but as we approached we noticed broken windows, the holes in the plastic covers that cover the pit, and the damaged vent pipes.

“When we entered, the toilets were often so filthy that they had been rendered unusable, and we would see learners choosing to use old mud or zinc pit latrines, or even the bush,” reads the report.