The sun begins to set as Alwande Khoza* returns home from her second clinic visit in just over a week. She lives in a student commune in a quiet Durban street. It’s a two-minute walk from the Steve Biko campus of Durban University of Technology where she’s a second-year business administration student.

It’s the last week of October. Most of Khoza’s peers are busy with their final exams as the academic year draws to an end. But Khoza, 20, has other pressing matters on her mind.

“Yoh! This pill is very big! How am I going to swallow it?” she asks herself. She’s holding a tablet, about twice the size of a Panado pill, in her hand.

Khoza grabs a glass of water, places the blue pill on her tongue and tries as hard as she can to swallow it. With the help of a few big gulps, she manages to swill down the 2cm tablet.

But every night at 9 o’clock, for the next few years at least, she will be taking this pill to help her stay HIV negative.

The HIV prevention pill is here, but will women take it?
Khoza is one of 524 young women using an HIV prevention pill as part of a demonstration project being conducted by the Centre for the Aids Programme of Research in South Africa (Caprisa) in Durban.

The study began in March last year and will continue until the end of May 2018, Caprisa scientists Quarraisha Abdool Karim and Pamela Gumbi explain.

In 2015, South Africa became the first African country to approve the use of pre-exposure prophylaxis (PrEP) for HIV. The only other country that had done so at the time, was the United States.

PrEP allows people at a very high risk of contracting the virus to lower their chances of getting infected by taking HIV medicine, according to the US Centers for Disease Control.

The HIV prevention pill, called Truvada, contains two antiretroviral ingredients, emtricitabine and tenofovir. These are the same ingredients of some of the pills that HIV-infected people use to control the virus in their bodies.

When emtricitabine and tenofovir are used as a form of HIV prevention, Truvada is taken once a day at more or less the same time.

Khoza and other study participants were tested for HIV and other conditions, such as liver problems. That is why she went to the clinic twice in one week.

The Caprisa researchers want to find out how young women feel about PrEP and how committed they are to taking the medication correctly.

Only people who are HIV negative can take Truvada. Tenofovir is excreted from the body through the kidneys. A medical professional therefore has to test that someone’s kidney function is normal and monitor them while they are taking PrEP, because it could sometimes affect their kidneys, according to 2014 study published in the journal Aids.

The more correctly someone takes PrEP, the better the pill works at preventing HIV infection. Studies have shown that PrEP can reduce the risk of contracting HIV by up to 96%.

Because men and women are biologically different, PrEP doesn’t work the same in their bodies. A 2015 study published in the Journal of Infectious Diseases showed that women who fail to take the pill every day have a higher chance of contracting HIV than men who have sex with men and skip doses.

The researchers found that 10 times more Truvada is retained in the rectum than in the vagina. As a result, women need a higher concentration of the pill in their bodies than men for the same level of protection.

Young women at risk
The national health department provides Truvada for free to about 2 000 sex workers at 14 pilot sites. In June the department started to provide the pill to men who have sex with men at three sites. According to Yogan Pillay, deputy director general for HIV, the department is monitoring five demonstration sites offering PrEP to adolescent girls and young women.

Several studies have shown that sex workers and men who have sex with men, along with young women between the ages 15 and 24, are being infected with HIV at a faster rate than the general population.

The survey also showed that condom use among women in this age group decreased from 67% to 50% between 2008 and 2012 at their last sexual encounter.

A 2016 Caprisa study, published in The Lancet HIV journal, found that one of the biggest reasons young, disadvantaged black women contract HIV at a faster rate than their male peers is a result of intergenerational sex — where young women have sexual partners who are on average eight years older than them. 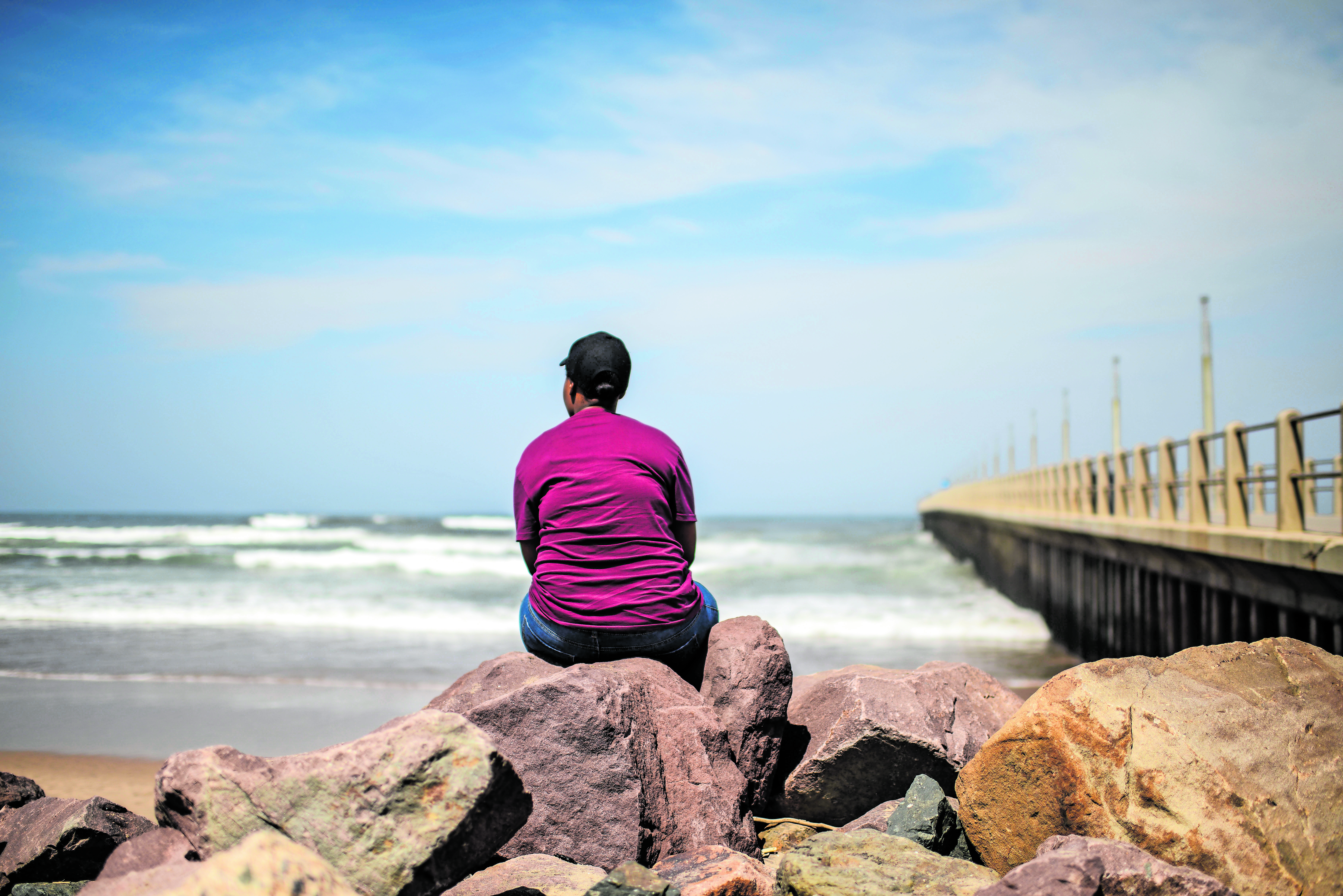 New outlook: Although Alwande Khoza’s* long-distance boyfriend was initially angry when he found out that she was using the HIV prevention pill. Now, he is glad she is taking care of herself. (Paul Botes)

Khoza tightly wraps her arms around her upper body. American pop singer P!nk is playing in the background as she hides away from the relentless Durban humidity inside a local restaurant. It’s late November.

“At first, my boyfriend was angry at me when I told him that I want to use PrEP. He felt as if I don’t trust him or I was hiding something from him,” she says.

The couple have been in a long-distance relationship for three years. Khoza spends most of the year at university and her boyfriend works in Richards Bay, about 180km north of Durban.

“In October my boyfriend asked: ‘We’re both HIV negative, why do you need to take this pill?’” Khoza explains.

But after researching PrEP himself, Khoza’s partner, 24, became supportive. He now often reminds her to take her medication in the evenings.

She’s never asked him why not, but he has since decided to go for an HIV test for the first time since they started dating.

“He told me he went to the pharmacy for an HIV test because he wants to take care of himself like I am. Before, I didn’t know his status. But I believed that he was HIV negative.”

Khoza pauses to take a sip of her drink.

“I don’t know where he sleeps and wakes up … I need to protect myself.”

The couple doesn’t use condoms regularly during sex. “You know how men can be about condoms. Sometimes women can be strong and say no [to unprotected sex], but sometimes it’s not possible,” Khoza explains.

A 2017 study published in the Global Health Action journal found that although women reported negotiating safe sex in their relationships, they feared the possible consequences of insisting on using condoms with their partners.

About 20km away from Durban, Wendy Makheya* is standing in the corridors of the Mega City mall in Umlazi. Churchgoers and other locals trickle in to do their Sunday shopping. She reaches for her phone inside her tan handbag and frantically types a message. “I just came back from my friends,” she giggles. “Hectic weekend.”

Makheya is 22. She’s been taking the HIV prevention pill for more than a year and a half. She lives with her grandmother and two uncles in Umlazi and is also part of the Caprisa study.

“Last year I had two boyfriends,” she explains. “One of them completely refused to go for HIV testing, while the other agreed to go only once.

“It’s so frustrating when a man doesn’t want to use a condom. At the moment when he refuses, we obviously don’t use protection. But at the back of my mind I’m always thinking: ‘PrEP, this is your time to work!’”

Makheya says her friends are sceptical about PrEP. “They were not comfortable with using Truvada because they didn’t believe it would prevent them from getting infected with HIV.”

Makheya admits that, at least initially, PrEP was hard to get used to.

She remembers: “After a week [of taking PrEP] I started doubting whether it works because I was struggling to sleep, vomiting a lot and had a rash around my body.”

But nine out of 10 people using Truvada experience no side effects, according to infectious diseases specialist Kevin Rebe from the Anova Health Institute.

Gumbi says Caprisa’s medical professionals counsel and encourage their clients to continue using condoms to protect them against sexually transmitted infections (STIs) other than HIV and pregnancy. According the US Centers for Disease Control, when people use condoms correctly and consistently, they are less likely to contract STIs but infections can happen when the condom doesn’t cover all of an infected area or sores such as herpes.

Moreover, often women struggle to negotiate using condoms with their male partners, which is why they need PrEP in the first place, explains Gumbi.

“I think I got an STI last year because I wasn’t using condoms,” Makheya remembers. “It was really bad. But after I got treatment, I promised myself to always use condoms.”

The national health department and Higher Education and Training HIV and Aids programme (Heaids) have started pilot rollouts at the universities of Free State and Venda. Twelve clinics will be opened at seven universities across the country by February next year, says Heaids director Ramneek Ahluwalia.

He explains: “The ultimate goal is the roll-out of PrEP to all post-schooling clinics that have the capacity to offer the service.”

Makheya reaches for her phone.

“I plan to use PrEP for the rest of my life,” she says. “You can never be too sure or too safe.”

But Khoza plans to stop after she’s finished studying and hopefully gets married.

“To be honest, it’s hard to always take this pill,” says Makheya. “I hope there’s a PrEP injection in the near future.”