Although McKinsey and Trillian may be first up in the National Prosecuting Authority’s efforts to recoup up to R1.6‑billion in assets from unlawful activity linked to state capture, it is the Estina dairy farm that puts the Gupta family directly in the line of fire.

South African Federation of Trade Unions (Saftu) general secretary Zwelinzima Vavi earlier this week applauded the Asset Forfeiture Unit in the NPA for moving closer to getting back assets that were looted from the state as a result of dodgy dealings linked to state capture.

But Vavi said it would be the Estina farm in the Free State that would humble at least two big players in the Guptas’ political network.

“Mosebenzi Zwane will definitely be on the jive when it comes to the dairy farm. I suspect that this may go all the way up to the new secretary general of [the] ANC, the premier of the Free State,” Vavi told EWN, referring to Ace Magashule.

The imminent seizure for preservation of R1.59‑billion in assets of global consulting company McKinsey and local counterpart Trillian will touch neither the Gupta family nor the politicians accused of helping them to loot the state. But that could change as early as next week.

This week, the NPA said Estina would form one of eight separate strands of investigation related to state capture. 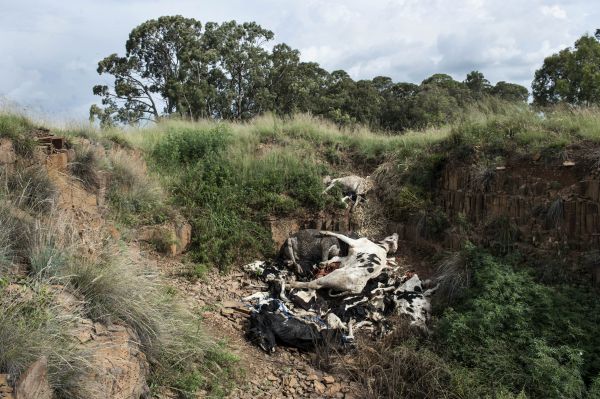 [Outrage over the deal included farming practices that saw dead cows (below left) dumped in a donga near a water source. (Delwyn Verasamy/M&G)]

The amount of state money spent on Estina is about 10 times less than that pocketed by McKinsey and Trillian, and makes up a vanishing fraction of the estimated R1‑trillion lost to state capture to date.

But whereas other allegations feature vague links to seemingly pliable politicians and alleged lieutenants of the Gupta family, the tiny Estina matter looms very large indeed, with apparent hands-on involvement by current minerals minister Zwane, decisions flowing from the office of Magashule — and money that allegedly went to fund a lavish Gupta wedding, with a little help from accountants at audit firm KPMG.

That promises to make the coming days at best very uncomfortable for the two prominent politicians, and the Gupta family faces the potential seizure of their personal assets in South Africa and abroad.

Magashule proudly announced the partnership between his provincial government and Estina, located in the small town of Vrede, in February 2013. It almost immediately drew the attention of the amaBhungane Centre for Investigative Journalism, which found links between Estina and the Guptas, including their sharing of offices. The family, however, said one of its companies had only briefly acted as subcontractor on the Estina project with a contract value of only R138 000, and Estina bluntly denied a Gupta link.

That turned out to be considerably less than honest.

Estina received extraordinarily good treatment from the Free State government, in a fashion that would later become a hallmark of alleged state capture. The province gave Estina a rent-free 99-year lease on a farm, and was also due to inject as much as R500‑million into the project. Estina itself would take no discernable risk, but would profit from a 1 000-head dairy herd.

By October 2013, it would later emerge, the national treasury was already investigating the project, only to find that the province had done no due diligence on its new partner, had followed no discernible supply-chain procedures, and had simply deposited very large sums into Estina’s bank account with no idea — and no apparent care — about how the money would be spent.

It was during the treasury investigation that it emerged the project had been conceived at least in part by one Mosebenzi Zwane, then Free State MEC for agriculture, who had subsequently pushed it strongly.

Despite the large amount of money flowing into it, Estina was apparently not able to keep its cows alive. In February 2014, amaBhungane discovered more than two dozen rotting cow carcasses dumped in an open ditch on the farm, just metres away from a river that supplies Vrede with its drinking water.

When Magashule later responded to the report on the dead cows and the state of the diary, he said the allegations were not true “as the project is progressing very well”.

By then, however, it was too late.

Only thanks to the #GuptaLeaks emails did the true, shocking nature of the Estina project emerge, in what amaBhungane in mid-2017 dubbed “the Dubai laundromat”.

By late 2013, the Free State government had transferred R114‑million to Estina. Estina, the leaked emails showed, transferred R84‑million of that to Gateway Limited, a Gupta shelf company in Dubai. Of that amount, R30‑million ended up paying for the glitzy Sun City wedding of Vega Gupta, which featured the infamous private plane landing at Waterkloof air force base, and another R31‑million flowed into the Guptas’ primary holding company, Oakbay.

As a bonus, the complex mechanisms used to direct the money meant the wedding was treated as a business expense, courtesy of KPMG, and so the Guptas were not liable for tax on the payment received from Estina.

The emails also revealed that, despite denials of involvement, the Gupta brothers were deeply and directly involved in setting up Estina.

Zwane, Magashule and the Gupta family have all since said the authenticity of the emails must be proven and a proper investigation concluded before they can answer questions.