Seven feminine figures, seven red-stained lips, seven sets of heels, six white jumpsuits, one figure in an umbhaco holding an iTsoba — Lhola Amira. A red cloth is draped across her one shoulder. Her movements are deliberate as she leads the six uniformed people down to the pier of the Kalk Bay harbour.

Over the next two days they follow her on to a fishing boat, sit, dance and sing next to the University of Cape Town SS Mendi memorial, walk into waves caressing the Milnerton beachfront and hook arms as they brace themselves against the Cape Town winds as Amira leads them to the Vredehoek quarry.

I am one of these womxn. We have been called to witness and to heal the memory of the SS Mendi.

Amira kneels down on the wooden pier. Laid before her are imphepho, a bottle of Viceroy, a jar of silver coins and a jar of sea water. These are offerings made to the ancestors before we board a small fishing boat. Linda Kaoma, Abongile Memela, Sibo Tito and I sit along the side of the boat. Amira sits at the back alongside Mtombo Sogiba, who is also a healer. We are seven headwraps bobbing in open waters. Two fishermen accompany us, steering the vessel. This is the first leg of our journey together. This journey is an appearance by Amira which will be documented. She has titled this appearance Xa Sinqamla Unxubo, which loosely translated from isiXhosa means “stopping the flow of agony”.

Amira is an artist who shares a plural existence with curator and academic Khanyisile Mbongwa. The two womxn exist as two distinct selves who share one physical body. Amira’s practice is that of appearance. Her work is centred on the survival of black individuals and black womxn in particular. For this particular appearance she recalls the story of the SS Mendi. 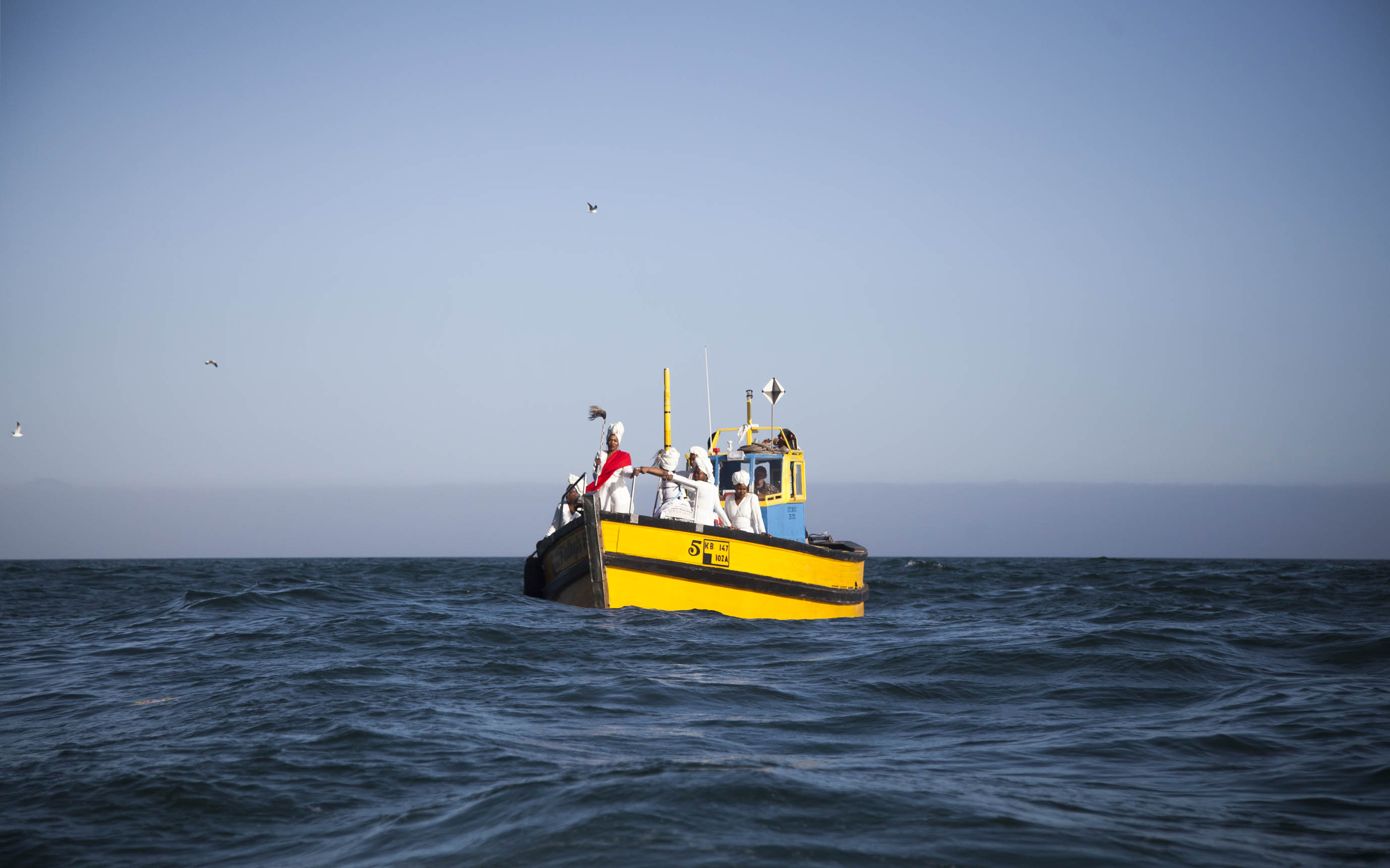 This story is one that insists on being retold, even when the pages of history books refuse to hold it. For years the story has been passed down orally as lore. The SS Mendi left the shores of Cape Town on January 16 1917 on its way to Le Havre in France. On board was the last contingent of the South African Native Labour Corps. They were sailing out in response to the British request for more manual workers on the Western Front. This was during World War I. The contingent comprised 805 black privates, five white officers, 17 non-commissioned officers and 33 crew members.

On the morning of February 21 1917, the SS Darro, a much bigger ship, hit the SS Mendi straight on. The damage was so extensive that the ship sank in 20 minutes. A total of 646 men lost their lives.

Integral to the retelling of this story are these words that were supposedly spoken by Reverend Isaac Wauchope Dyobha as the men drummed their feet on the deck of the ship as it sank: “Be quite and calm my countrymen, for what is taking place now is what you came here to do. We are all going to die, and that is what we came for. Brothers, we are drilling the death drill. I, a Zulu, say here and now that you are all my brothers … Xhosas, Swazis, Pondos, Basotho and all others, let us die like warriors. We are the sons of Africa. Raise your war cries my brothers, for though they made us leave our assegais back in the kraals, our voices are left with our bodies …”

These words are also inscribed on to the memorial at the University of Cape Town. We sat under it on the first night holding blue, green, red and yellow candles. Our hands shielded the flames as the wind tried relentlessly to blow them out. When it succeeded, we would reignite our flames from our neighbours. Amira was quiet. She turned to us and said in a low voice: “I want to live. I want us to live. We negotiate dying all the time.” I stared at my flame struggling to keep itself going.

It was clear then, and at every site we visited, that what we were called to do was to think of these men beyond death. These were not just bodies, but people with lives. It was difficult not to look at the sea and think of death, to feel the waves hit the boat again and again, feeling perpetually off kilter.

Sometimes I forget that one does not have to die to be worthy of life. I needed to remind myself that before there is death, there is life. I realised that the healing was in the communal and in the witnessing. There were various points on our journey together where I did not understand the impulses of some of the womxn, but I had been called to bear witness and acknowledge their journey.

Amira’s appearances challenge the ways in which Western discourses make sense of time, space and activism. Our engagement with the memory of the SS Mendi was one that did not have a fixed temporal locale. It was important that we understood the significance of the time that they lived, but also to recognise how their spectre continued to shape our lives today. We were asked to be in a constant space of awareness and presence.

In this way Amira’s appearances and understanding of cultural production is a critique of Homi Bhabha’s notion of a “third space” — an idea in sociology that describes a hybrid space where the first (the physical) and second (the remote) spaces fuse, that allows remote participants to engage in social relations with one another at a distance. Amira insists on a fourth space that resists definition. It is in a constant state of becoming and is therefore emancipatory as it asks us to constantly reimagine our past and our future.

Seven womxn sit on their haunches, all dressed in white, their heels digging into the sand, salt covering their red-stained lips as they look into the ocean. At some point, they all gather around the one with a red cloth draped across her shoulder. She looks into the distance. A tear rolls down her cheek. We have come here to mourn the lives of men whom history had threatened to swallow. We came to listen to the voices left behind with their bodies. We came to cleanse ourselves and we came to rejoice in the lives we have left to live.