Viceroy comes up short on Capitec

It has been a hellish week for mild-mannered Jean Pierre Verster. He’s searching for answers as he pores over numbers and his phone is ringing off the hook. He is the man in the middle of a perplexing clash between Capitec Bank and little-known Viceroy Research.

In his former position as an equities analyst at 36One Asset Management, he became known for his share-shorting savvy when he made R100-million for his hedge fund by betting against African Bank before its collapse in 2014.

More recently, in his position as a portfolio manager of Fairtree Capital, Verster’s analysis again saw him take a short position on Steinhoff International.

It paid off again.

In December last year, it became clear all was not well with the retailer: German authorities were looking into alleged accounting fraud, the auditors would not sign off the financials and the chief executive stepped down overnight after being with the company for 18 years. The shares plummeted, losing up to 90% in value at one point.

Another party that also saw the writing on the wall for Steinhoff was Viceroy, a obscure research company which, soon after the collapse of the share, released a report about the questionable health of the retailer.

Verster voiced his agreement with Viceroy’s Steinhoff analysis at the time, but this week the latest report from the research house hit a little closer to home when it suggested Capitec was “uninvestable” and should be placed under curatorship immediately. Viceroy acknowledged it had a short position in Capitec shares.

Verster, with his knack for shorting, has been a nonexecutive independent director the bank since 2015 and also chairs its audit committee.The Viceroy report calls on him in particular, commending him as an “excellent analyst”, to raise its concerns with the bank auditors and to “recognise Capitec’s resemblance to his previous African Bank short”.

In the report, Viceroy found Capitec’s financials unbelievable. It suggested bad debts in Capitec’s loan book must be much higher than reflected. By its calculations, when comparing it with its competitors, Capitec needs to write off R11-billion. It concluded Capitec was a predatory lender, charging excessive fees, and that it could be forced to pay significant damages in a pending class action.

But, unlike the Steinhoff case, Viceroy’s latest report has, so far, not found favour with Verster.

“One must appreciate that Viceroy did not cobble this report together in 24 hours and so it would be unfair to expect a comprehensive response to it in 24 hours,” he said. “What I can say is that, up until now, I have not been made aware of any significant issues that raise any serious concerns regarding Capitec or Capitec’s financials.”

Although very much still in the thick of unpacking the report, Verster said, what he has found so far, are some errors in the hard numbers of the report that are so glaringly obvious that it made him wonder if Viceroy itself has not been duped.

“I do not question that they think they are correct but, on the face of it, it seems like someone has fed them misinformation.”

With the Steinhoff report, it appeared that Viceroy had not worked on the numbers alone, he said.

Asked how it was that he agreed with Viceroy’s analysis of Steinhoff but not with that of Capitec, he said: “Whether someone is right or wrong is not about who makes the statement, it’s about the quality of information. On the Steinhoff facts, I agreed with them.” 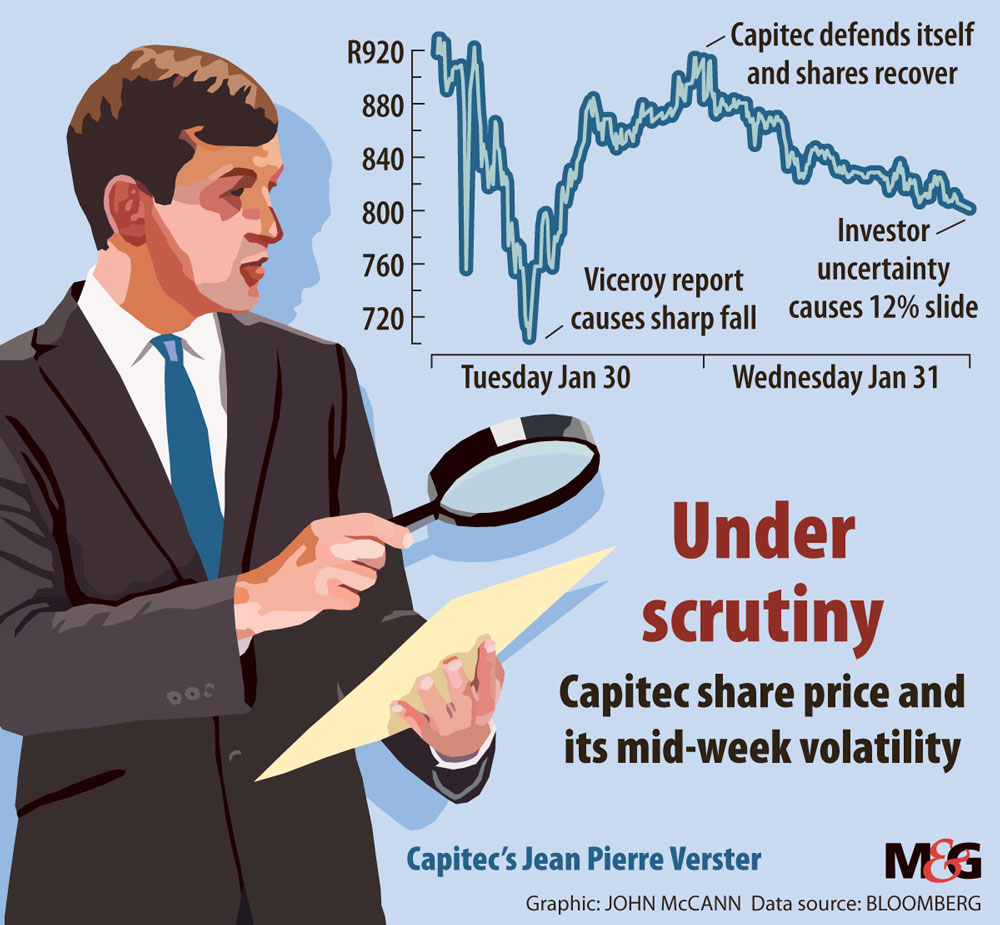 He said he had noted with interest that the tone in the Viceroy report seemed to change when referring directly to him.

“There is no reason why people I have never met should handle me with such respect. It tells me someone involved here is someone who knows me.”

Verster said it is particularly tricky to respond decisively to the report because it is replete with “half-truths”. For example, the report seems to conflate the idea that Capitec reschedules loans for customers struggling to pay with the rolling over of old loans into new ones for other customers.

Rescheduling loans occurs when a customer is struggling to make payments and so the time over which they must pay is extended and the monthly instalment is brought down.

Jan Meintjes, the portfolio manager of Denker Capital, said Viceroy’s take is that, when a client falls into arrears, Capitec prefers to reschedule the loan rather than to show the arrears on the books. The accusation is that by rescheduling, Capitec will not just give the client a longer period to pay back the loan but will also issue an even larger loan, much of which will go towards paying off the initial debt.

Viceroy argues these rescheduled loans are then presented on the books as new loans that have never been defaulted on and so provisions for the loans (should they go bad) are not as great as they should be.

Capitec chief executive Gerrie Fourie said this is not the case at all.

“We have very strict rule on rescheduling,” he said in a call with analysts on Tuesday. “When a client’s loan is rescheduled, the bank keeps provisions for the loan for 12 months until there is evidence that the client is rehabilitated.” A client rescheduling a loan does not walk out of the bank with more debt and a loan origination fee is not charged.

He said Capitec reschedules some loans and rolls over others, in accordance with the National Credit Act, but that the two processes are separate.

Rolling over a loan, when a portion of the new loan is used to settle an older one, entails a full affordability review and an initiation fee. Fourie said new loans are not extended to customers who are in arrears.

But Viceroy is not the first to express concern over rescheduling. JP Morgan analysts also raised the issue when, in 2016, the company results showed a 75% surge in rescheduled loans. Recently Benguela Fund Managers wrote a letter to Capitec querying the matter.

Verster said the rate of rescheduling by Capitec is higher than by other lenders but this is because other banks are loath to do it. Capitec has always claimed that the behavioural consumer data it has available to it gives it the competitive edge in lending to a higher quality of customers. It is not because the customer has the assets to secure the loan but rather because of the customer’s expected behavioural propensity to continue to service the loan. This is why it is more willing to reschedule loans.

Capitec claims a key flaw in Viceroy’s assumption that its bad debt is understated is that the research does not take into account that Capitec writes off bad debts after 90 days and so comparisons with other lenders is meaningless, because they keep this kind of debt on their books for much longer.

“I would be very surprised if there is a big hole in the balance sheet,” said Meintjes, adding that after African Bank’s demise, auditors are much more aware of these issues and Capitec has been much more conservative in choosing to write off debt rather than to provide for it.

While stakeholders continue to try to separate fact from fiction, speculation has abounded over Viceroy’s timing and motives for releasing the report. The company declared that it has taken a short position on Capitec and so stands to profit if the shares fall. But, given that the information on which it based its information did not appear to be from an insider, these trades would appear to be legal.

The release of the report saw the price fall 15% — from R943 a share at the close of business on Monday to R800 at 5pm on Wednesday. Analysts at some large investment institutions are torn over whether the share value will move higher or lower.

Others have openly slammed the report. In a widely circulated release, Denker Capital’s Kokkie Kooyman said he found he report on Capitec self-seeking and malicious.

Renier de Bruyn, an investment analyst at Sanlam Private Wealth, said the report was maliciously written with the sole intent of the authors and their associates to profit from a collapse in Capitec’s share price.

“Analysing the report, it quickly becomes clear that the analyst not only made errors in logic but also conveniently ignored obvious and publicly available facts that would have countered their narrative,” De Bruyn said.

Summit Financial Partners, which is assisting over-indebted consumers in court action against Capitec, told the Daily Maverick that it did not agree with the conclusions of the Viceroy report about the health of the business.

Viceroy did not respond to emailed questions but on its Twitter page it said it was preparing a response to Capitec’s statement. It also said Capitec clients “in cyclical debt” and former employees had reached out to Viceroy en masse and corroborated its report.

“If @SAReserveBank is willing to grant protection to whistle-blowers, we would (with permission) forward emails to regulators,” Viceroy tweeted.

Verster said, although he trusts the Capitec management team, he still verifies information received with the help of other sources.

“And, at this point in time, I have not found anything to make me question the veracity of Capitec’s reported figures or business model.”

He reiterated a call for anyone with concrete evidence of wrongdoing at Capitec to get in touch with him directly on Twitter.

The treasury said the Viceroy report provides no basis to put any bank under curatorship and has urged regulators to look into initiating a market abuse investigation against the research house.

The Reserve Bank has said, according to all the information available, Capitec is in good health and meets all prudential requirements. Nonetheless, the Democratic Alliance has called on the central bank to investigate Viceroy’s allegations.

The National Credit Regulator said it has no comment to make on the matter.