Looting of Africa calls for action

A new World Bank report, The Changing Wealth of Nations 2018, documents Africa’s impoverishment by the rampant extraction of minerals, oil and gas. Yet the bank enables the repatriation of foreign loan repayments and transnational corporate profits that sustains the looting.

Using “natural capital accounting”, the bank calculates “adjusted net savings”, to better measure economic, ecological and educational wealth. This is preferred to “gross national income”, a minor variant of gross domestic product, which does not consider the depletion of nonrenewable natural resources and pollution, not to mention unpaid women’s and community work.

The bank concludes that sub-Saharan Africa loses about $100-billion worth of adjusted net savings annually. It is “the only region with periods of negative levels — averaging negative 3% of gross national income over the past decade — suggesting that its development policies are not yet sufficiently promoting sustainable economic growth … Clearly, natural resource depletion is one of the key drivers of negative adjusted net savings in the region.”

The bank asks: “How does sub-Saharan Africa compare to other regions? Not favourably.” Contrary to “Africa Rising” mythology, the adjusted net savings decline of the continent was at its worst from 2001 to 2009. 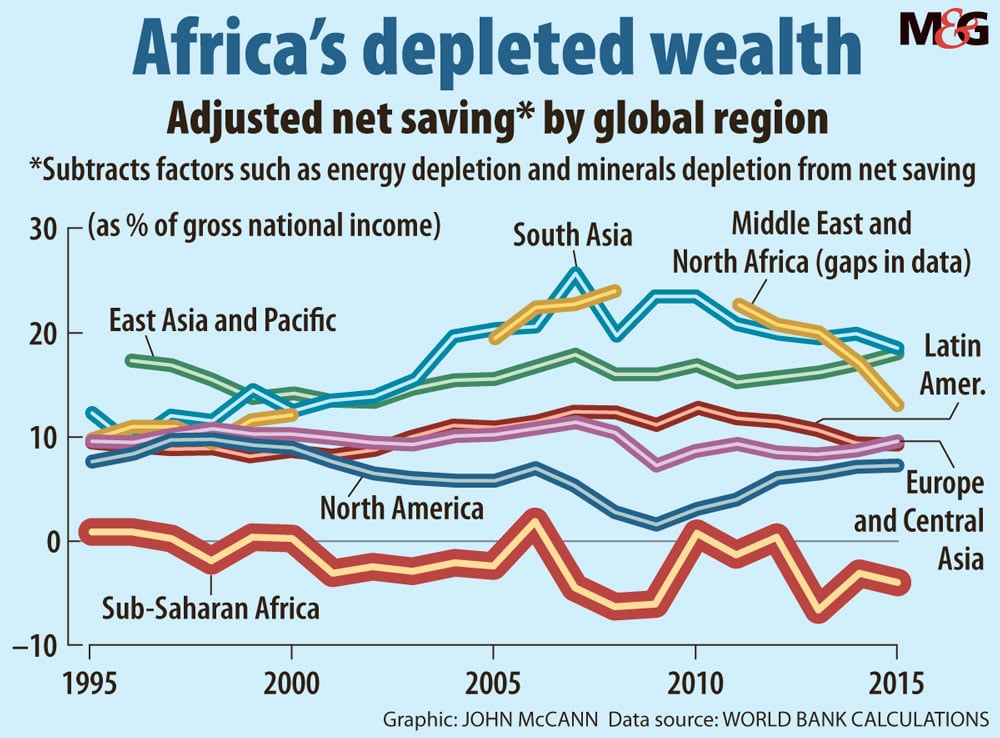 Attracting mining foreign direct investment is counterproductive. The bank concedes: “Especially for resource-rich countries, the depletion of natural resources is often not compensated for by other investments. The warnings provided by negative adjusted net savings in many countries and in the region as a whole should not be ignored.”

But warnings such as the 2012 Gaborone Declaration by 10 African leaders are mainly ignored. There is a simple reason; it’s related to power.

“The [adjusted net savings] measure remains very important, especially in resource-rich countries. It helps in advocating for investments toward diversification outside the resource sector,” the bank states.

Africa desperately needs diversification from mining but governments remain influenced by transnational corporates intent on extraction. Even within the bank, this bias is evident, as the case of Zambia shows.

Was copper neglected because taking it into account would show a substantial net loss? A decade ago, one bank estimate of copper’s annual contribution to Zambia’s declining mineral wealth was 20% of gross national income. Discussing such data might compel Zambians to rethink their economic strategy.

World Bank staff do not work in Zambians’ interests but on behalf of other international banks and transnational corporates. From 2002 to 2008, Zambian president Levy Mwanamasa came under severe pressure from the bank to privatise state assets to repay older loans, including those taken out by his corrupt predecessor, Frederick Chiluba. That debt should have been repudiated and cancelled.

When Africa’s largest copper mine, Konkola, was privatised, Zambia’s treasury should have received $400-million. But the buyer, Vedanta chief executive Anil Agarwal, bragged to a 2014 investment conference in Bangalore about how he had tricked Mwanawasa into accepting only $25-million. “It has been nine years and since then every year it is giving us a minimum of $500-million to $1-billion,” he boasted.

The latter is exemplified by the African Union’s 2009 Alternative Mining Vision (AMV). It proclaims: “Arguably the most important vehicle for building local capital are the foreign resource investors — transnational corporates — who have the requisite capital, skills and expertise.”

South African activist Chris Rutledge opposed this neoliberal logic in a 2017 ActionAid report, The AMV: Are We Repackaging a Colonial Paradigm?

“By ramping up models of maximum extraction, the Alternative Mining Vision once again stands in direct opposition to our own priorities to ensure resilient livelihoods and securing climate justice. And it does not address the structural causes of structural violence experienced by women, girls and affected communities,” Rutledge said.

Perhaps community-based opposition would be more effective. According to the Bench Marks Foundation, in a pamphlet prepared for the civil society Alternative Mining Indaba held in Cape Town this week, “intractable conflicts of interest prevail with ongoing interruptions to mining operations. Resistance to mining operations is steadily on the increase along with the associated conflict.”

The Alternative Indaba’s challenge is to embrace community resistance, and not to retreat into narrow nongovernmental silos or by ignoring mining’s adverse effect on energy security, climate change and resource depletion. In 2015, when all new mines in South Africa were valued at $80-billion, Anglo American chief executive Mark Cutifani conceded: “There’s something like $25-billion worth of projects tied up or stopped [by critics].”

Meanwhile, the World Bank still attracts intense protest. Women from Marikana’s slums organised as Sikhala Sonke remain disgusted by the bank’s $150-million financing commitment to Lonmin. From 2007 to 2012, the bank considered the firm its “best case” for community investment — until the police massacre of 34 workers there during a wildcat strike.

(Bank president Jim Yong Kim even visited Johannesburg two weeks after that but didn’t dare mention it, much less visit his mining stake.)

In spite of the bank’s revelations about the exploitation by transnational corporates in its recent report, an increasingly schizophrenic World Bank is a sponsor of this week’s African Mining Indaba at Cape Town’s convention centre. Each year, it’s the place to break bread and sip fine local wines (though perhaps not water in the climate-catastrophic city) with the world’s most aggressive mining bosses and allied African political elites, conferring jovially about how to amplify the looting.