“This used to be the most popping neighbourhood,” Gape Khudu says, of Phase Two in Gaborone, where he shares a house with his close friend, Puisano Sane. As we walk the short distance from where we meet to his house, Khudu jumps on Sane’s back for a piggyback ride and smilingly adds: “But it’s a really quiet area now. It has really changed.”

The playful nature of his piggyback ride belies Khudu’s steely determination to be something of a change-maker in Botswana. Through his #BoysInSkirts initiative, he is hoping to shift the country’s perceptions of gender-nonconformity. The online initiative— or “movement”, as he refers to it— has, since he started it in September 2016, already gained a significant following. His Boys in Skirts website, Twitter, Instagram and Facebook pages— all under the moniker, Geegee Strauss (“I had to put some flare into the name,” he laughs) — has in excess of 10 000 followers.

“I started it to try and break down gender boundaries within fashion,” says the 21-year-old.

Along with designer, Gorata Morapedi, and photographer, Gonna Monngakgotla, Khudu creates self-portraits that aim, he says, to “advocate for freedom of attire”.

Not limiting himself to the virtual world, Khudu also takes his particular brand of sartorial activism to where he feels it is needed the most— the streets of Gaborone.

“I have my days where I just rock a skirt or dress to school, you know. I wear anything I want, whenever I want. It doesn’t necessarily have to be a skirt. If I feel like I need to wear this thing today, I just put it on and do my thing,” he smiles.

Doing his thing in what he sees as “still a very conservative country” does not come without its risks and challenges.

“I get stares, yes― especially because I have to use public transport to get around. So I don’t do it that often, because I don’t want to be in a situation where I am caught up with people who don’t get the idea behind what I am doing. I don’t want to end up getting harassed. The thing is, most people here grow up believing that a man should be with a woman and a woman only; that there is no other way of existing. People in Botswana are still very culturally-minded,” he says.

Botho Maruatona is the gender and youth advocacy manager at the Botswana queer rights organisation, Lesbians, Gays & Bisexuals of Botswana (Legabibo), which has, for years, been engaging with the country’s dikgosi, or traditional leaders, in an attempt at fostering greater acceptance of queer people.

Maruatona says that, when initially engaging traditional leaders, the organisation was met with resistance due to “a culture of not wanting to speak about things that are taboo” as well as a perception that being gay is illegal.

Engaging with traditional leaders is an essential part of the organisation’s drive to foster greater acceptance of queer people in the country.

“The thing with Botswana is that Batswana are generally very reluctant to be rebellious,” she says. “So if an elder in a community has ok’d certain conversations, there is no real reluctance. Because it seems like an order. Then it becomes a snowball effect― like, ‘if my chief is ok with it, then I could learn a few things about these issues’.”

Although Section 164 of the country’s Penal Code carries with it a maximum sentence of seven years’ imprisonment for “carnal knowledge of any person against the order of nature”, Maruatona is quick to point out that “there is nothing illegal about a person’s identity— the only thing that is illegal is the actual sexual act”.

“Getting the dikgosi to understand this has made it much easier for us,” she says.

She concedes, however, that while these engagements have been largely successful, for those in power to come out publicly in support of LGBTI people is “something of double-edged sword”.

“They might listen to us and come away feeling more accepting, but the question then is how do they communicate this support to their communities. In going back to their communities and openly showing support, they are potentially exposing themselves to a certain level of stigma. That is what we have seen: people are reluctant to work with and support the LGBTI community because it really is about self-preservation. And I think we need to understand that and acknowledge that there is realness to this double-edged sword.”

The precarious nature of their allies openly showing acceptance aside, Maruatona adds that the engagements with traditional leaders has yielded some success. Little research into the approach’s effectivity could however be undertaken because “we are really small organisation with limited human resources”.

Refilwe Mogorosi, an independent human rights activist, says: “Even though there is not much documented evidence to show this, I think as a country we have come a long way in terms of fostering change and growing the visibility of the queer community in the country. Botswana is a very conservative country where, for the longest time, we have not been able to address or speak to issues affecting queer persons. So it is— and continues to be— a work in progress.”

A 2016 Afrobarometer survey, found that 43% of Botswanans surveyed “are not opposed to having homosexual neighbours”.

In the village of Metsimotlhabe, located approximately 20 km outside the country’s capital, painter Lincoln Langwane concedes that he has very little contact with his neighbours. “Let’s just say I keep to myself,” says the 25-year-old. 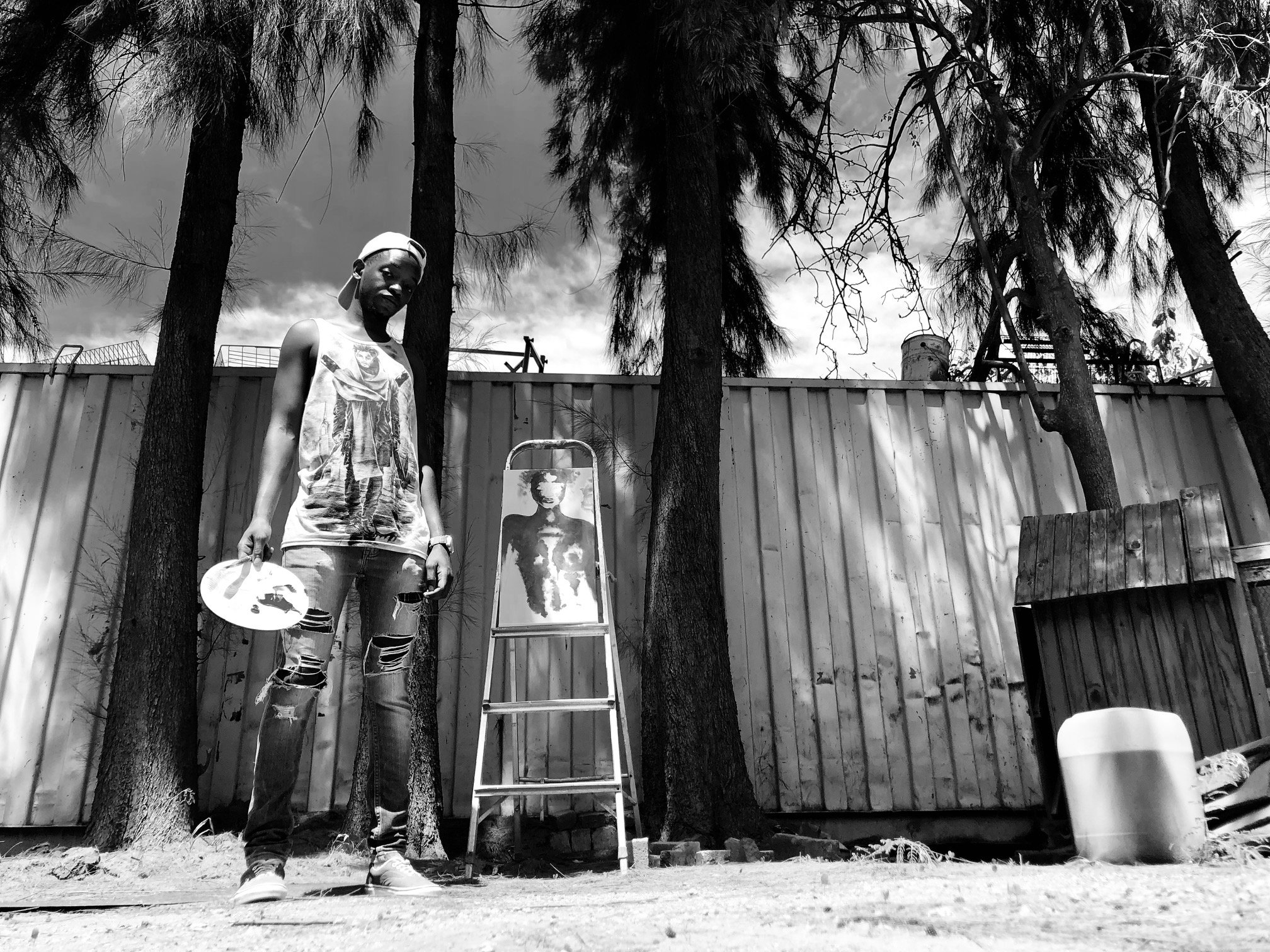 Langwane is member of Legabibo’s LGBT Arts Project, which was established with the aim of empowering queer artists and “to share our stories and experiences” with the broader society.

Langwane, whose passion for art was ignited while at school, says his work was not initially influenced by his sexual orientation. “But when I started working with Legabibo, I started telling my story and sharing my experiences through my art. But telling my story through my work wasn’t much of a priority at first. I was focused more on telling other people’s stories, but realised that, in doing that, I was essentially telling my own … because we share so much of the same experiences,” he says, adding: “Growing up gay in a homophobic society, people make it so hard for us to live with ourselves.”

Along with other project participants, Langwane exhibits his work as part of the monthly art event at the city’s Molapo Crossing. “What is great about these events— and art, generally— is that I get to tell my story in a way that doesn’t piss people off,” he laughs, adding: “People relate to art, even if they’re not queer. It helps us connect with the broader society.”

Now in its sixth year, connecting with the broader society is one of the main drives behind the Batho Ba Lorato Film festival. Legabibo’s Bradley Fortuin is the festival organiser.

“The festival was started mainly as a means to create awareness among the public of LGBT issues; to create visibility as well as a platform where people can interact and share experiences,” says Fortuin.

Under the theme Owning Our Space, this year’s festival, which runs from Friday 22 February to Saturday 23 February, will include screenings of the documentaries Simon and I and Reclaiming Intersex. Also scheduled for screening is Inxeba — The Wound, the South African film depicting a queer love triangle set in an initiation school. Protests by traditional organisations in South Africa led to some screenings of the film being cancelled.

Aware of the uproar the film caused, Fortuin believes that screening it is important as “we need to find working solutions to end stigma”.

Maruatona adds: “In our engagements with traditional leaders, we still have a lot misconceptions and doubt. We still get a lot of comments like ‘why now?’ or ‘why does it seem as if this thing is trending?’ Those are the kinds of things we are trying to break down; to say that ‘it is not a trend… it is just that there is an open platform on which to engage now’.”

While sexual orientation and gender identity and expression might not be trends, fashions certainly are. And it is fashion that Khudu is employing to create a platform for engagement— all risks considered.

“To some extent, yes, there are times when I fear for my safety,” he says. “But, honestly, I don’t think that if someone beat me up, that would stop me. I don’t think it would ever stop me. We live in a time where there is so much change. But I feel like I live in a society where people don’t want to accept change. All I want is for the kids coming after me to express themselves the way they want to. I just want us to be a free society.”