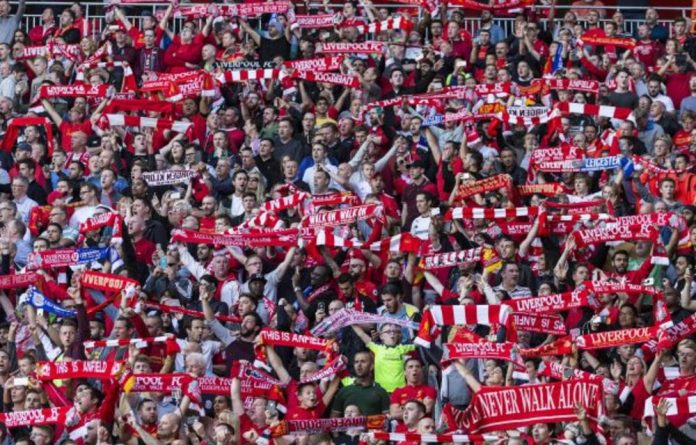 Egyptian striker Mohamed Salah has been leading the goal-scoring for Liverpool, much to the delight of Reds fans all around the world.

The chant, which was first heard during the Reds’ Champions League game against Porto, has been shared widely online, with the catchy tune being lauded as an encouraging sign of racial and religious diversity being celebrated in English football.

Salah, who transferred to the Merseyside club last June, is a follower of the Islamic faith and appears to be enjoying the chant, replying to a tweet of the video of the chant with heart-eye emojis.

Although the chant is definitely catchy, one small chant does not signal the defeat of racism in football.

There’s a history of racism, anti-Semitism, homophobia, nationalism and Islamophobia, that underpins the game. The Football against Racism in Europe (Fare) network analysed thousands of matches during the 2015-2016 and 2016-2017 seasons and recorded more than 500 incidents of a racist, anti-Semitic, homophobic, nationalist, or Islamophobic nature.

The study was done worldwide and British fans were found to be the worst with 59 recorded incidences.

Kick It Out, an organisation that looks at discrimination in football, found that in 2018 alone there has been a 38% increase in discrimination, which includes racist and homophobic behaviour in the Premier League. Fans started singing the song because of the results Salah was producing for the team week after week.

That’s usually how it works: players get songs from fans when they are performing well.

But what response are we to expect if Salah does not perform? Not just Liverpool fans in particular but English football fans in general. The tide can turns very fast when players do not perform on the pitch. And those, once very positive, songs can very easily turn ugly. Fans have also sung about Salah being the king of the pyramids. Hopefully that will be the outcome of this chant: football fans educating themselves about people who might not look like them but who make  up an integral part of their society.

It’s a catchy song that’s probably going to be sung a lot in the next few weeks and months as Liverpool (hopefully) maintains the momentum they have going.

Although the chant — and celebration of a player with the first name of Mohamed — shows progress, we can’t get carried away.

This is an edited version of an article that originally appeared on thedailyvox.co.za