It took Thobile Mtshali eight years to finally be accepted at a university.

Ever since she passed matric in 2010, she has applied for a university place and funding from the National Student Financial Aid Scheme (NSFAS), with no luck.

Now, in the year that she was accepted at the Durban University of Technology (DUT), her future seems bleak.

Mtshali (26) is registered as a first-year student to study information and communication technology in business analysis. But because of the seven-week strike by university employees that has brought teaching to a standstill, she has not seen the inside of a lecture room since arriving at the campus on February 6.

DUT’s 22 797 students have been in limbo since the academic year started, after the university had to suspend classes because of unrest.

What has made the situation worse is that NSFAS has not processed her application yet because of the strike.

She was able to register following the government’s announcement last year that all first-entry students who had applied for funding from NSFAS, and who came from so-called poor schools, qualified for financial aid and would be admitted to study. The government also said they could be placed in residences without paying a registration fee.

But because NSFAS has not fully processed her application, Mtshali has not received her meal allowance.

“As it is now, I don’t have groceries. My roommate and I have the same problem, so we have to ask our neighbours to borrow us money to buy bread,” she said. 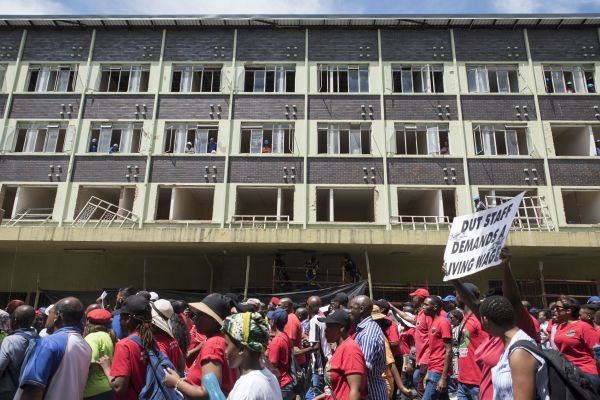 [#DUTShutdown: After a seven-week strike, during which workers brought the institution to a standstill, the Durban University of Technology is reopening its doors. For Thobile Mtshali and Mdumiseni Gumede (below) the strike has had dire academic and financial implications. (Madelene Cronjé/M&G)] 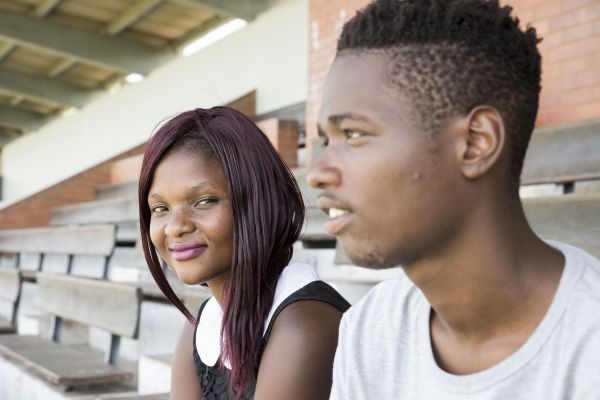 “I will eat bread every day until they make a plan back home to send me money because no one is employed; we survive with the social grant of my two younger siblings. They were not anticipating this because they thought NSFAS would take care of everything.

“So I have been surviving by begging from other students to give me money for bread, which I eat with sugar water. It is not nice to beg but luckily I stay with students who are understanding,” she said.

Mtshali is yearning to attend lectures and start her studies, and hopes that the university management and unions reach an agreement soon. “All I want is to go back to class. Even if they say we are not going to close for Easter holidays, it is fine as long as we go back to class,” Mtshali added.

‘All I want is to graduate’

Things have also not been easy for third-year chemical engineering student Mdumiseni Gumede.

His biggest fear has been that, if the strike does not end soon, he might lose his bursary or even have to repeat the year, which is not an option for him.

He has signed a contract with his sponsor that he must pass every term. If he does not, he loses the funding.

Gumede (22) said his sponsor is aware of the strike. But he has no guarantee that they would understand if he were to fail the first term.

“If I lose my bursary, I would not be able to pay for my studies. At home we depend on my grandmother’s old-age social grant and younger sibling’s social grant. My mother is unemployed,” he said.

“Basically, I’m the solution at home. When I finally get to work, I will be able to raise the standard of living and even move them out of the shack we are living in.

“I would like to see management sorting out their issues with workers and very fast, because I do not want to lose this academic year. I want to graduate; I no longer want to be here.”

Gumede said in the weeks that the strike has continued, students had already lost out on a great deal of academic work, including crucial tests, and would have to study over weekends to catch up even if the strike did end soon.

Because of the strike, Gumede has also not been able to register for a university residence and he has been sleeping in lecture rooms over the past few weeks.

“So, since the strike, I have been sleeping in classes. I wait for the cleaners to finish cleaning and then go to sleep at around 11pm, and I must be up by 6am before the security guards catch me. I take a shower at the sports centre and I keep my clothes with friends,” said Gumede.

‘All we want is a living wage’

For the protesting employees, sticking to their strike is the only way of making sure that they get what they want from the university.

“This is my 32nd day participating in the strike. I have been here from day one,” said a staff member who wished to remain anonymous because she is not mandated to speak to the media.

“I have even lost weight from the walking and running we’ve been doing while protesting,” she joked.

She said in the 11 years she has worked at the university, a strike has never lasted longer than three days.

“But we can’t give up now. We have come too far to give up now. All we want is a living wage; school fees are increasing, petrol goes up all the time and everything goes up, but [vice-chancellor Professor Thandwa] Mthembu wants to give us 6.5%.”

The employee said, even though the university has docked the salaries of staff members, this has not discouraged them from fighting for what they “deserve”.

“I got paid R5 000 and, after deductions, I was left with R800. I had no money for rent, school fees for my child and groceries. It has been difficult, I won’t lie, but I won’t give up; I can’t give up. If I do, it means all the hard work would have been for nothing,” she said.

She said other colleagues were paid as little as R3 000 before deductions and were left with nothing to pay for their bonds and cars.

The university docked salaries for about three weeks of the strike, including those of workers who have not participated in the labour action.

But, in a statement this week, Mthembu said the institution’s human resources department was working at rectifying the error.

He added that the three unions leading the strike were aware that, even though the protest was legal and protected, the university had adopted the no-work, no-pay principle as provided for by the law.

‘One day we must end the strike’

The Durban University of Technology (DUT) salary dispute might come to an end if fresh negotiations between unions and the university’s management are fruitful.

Reporting back on Wednesday, the provincial secretary of Nehawu, Phakama Ndunakazi, told staff that, even though the law allowed for the strike, employees needed to start thinking about returning to work.

“The law allows us to be on strike and push the management to come to the table. And we must say, as bad as it is, one day we must end the strike or suspend it. Leadership has taken a decision to say we must suspend the strike — the question is when,” he said.

“I know the agreement talks of March 1 but remember, we said in everything that we do we must also take a mandate from you and, at the same time, we must also advise you, because that is our responsibility as the unions. You must think about what we have raised, that one day you must go back to work.”

Ndunakazi told employees on Wednesday that all three issues were back on the table.

“We said, if management’s purse cannot cope, the deputy minister must intervene. We saw the budget speech, there is an increase in higher education; they can use that money as a grant. We have raised that point,” he said.

He also said the unions raised the issue of workers’ salaries being docked and that they must be paid back their money. He said this to loud cheers of: “Pay back our money.”

Ndunakazi added that on Friday there would be another meeting with Manamela, general secretaries of unions, university management and council to do an assessment of the negotiations. — Bongekile Macupe