However, his 100-day plan of action to stimulate the economy, attract foreign investment, curb corruption and promote human rights has received mixed reviews in the country.

Since Mnangagwa took power, free, state medical care for children and the elderly and a temporary reduction in fuel prices have been introduced.

The government has also removed police roadblocks and spot fines for traffic offences, which many see as having a positive effect on society.

The proposed establishment of special anti-corruption courts and the arrests of several high-profile figures on allegations of corruption have also been welcomed by the public, but some, including Ida Sibanda, a 57-year-old former school teacher, say more must be done to root out corruption. 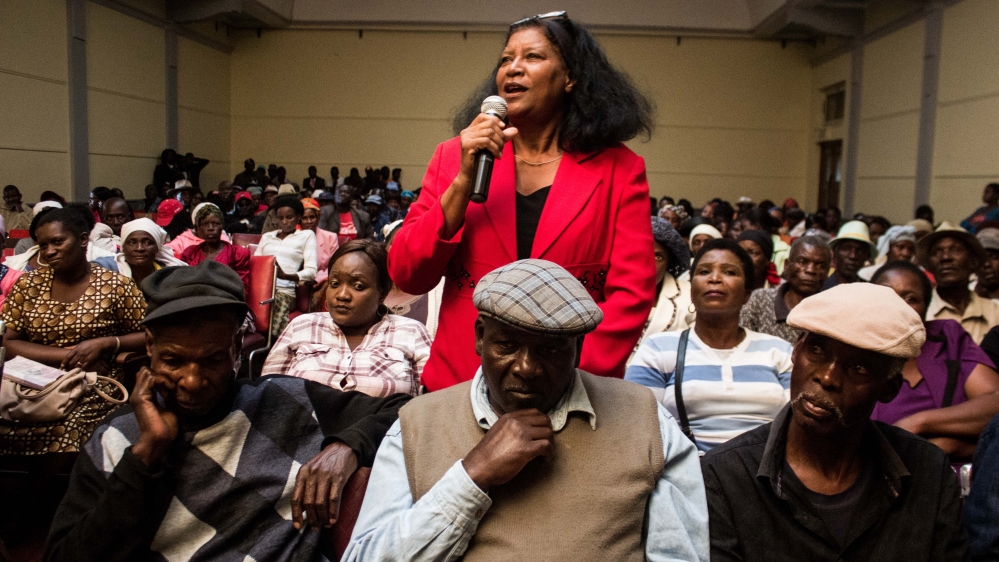 “He has done a good job so far in getting rid of roadblocks and arresting corrupt people,” Sibanda told Al Jazeera.

“But there are some in his own cabinet who must go behind bars.”

In his crackdown on corruption, Mnangagwa issued a three-month amnesty in December to return looted money.

According to the new president, at least $250m out of an estimated $1.3bn of externalised funds have been repatriated since the amnesty began.

In an effort to re-engage with the world with the aim of reviving Zimbabwe‘s economy, Mnangagwa has cut new deals with Belarus, Russia and China.

He also recently commissioned a South African company to supply hundreds of train wagons and locomotives for $400m to the National Railways of Zimbabwe, a struggling, state-owned enterprise once hailed as Southern Africa’s transport beacon.

Government efforts to revive industry, which currently operates at less than 50% capacity, have some hoping a better future might be possible.

Gilbert Nyoni, a 48-year-old self-employed panel beater, said the $20-million lifeline recently given to the Cold Storage Company (CSC) shows some sign that one of the country’s largest meat abattoirs could soon operate at full capacity.

Nyoni, who currently works at a car scrapyard behind the giant slaughterhouse, said he hopes that efforts to support CSC would translate into job creation.

“I can feel some change even though it’s small. Things may not be where we want them to be, but I think if this government continues working, we’ll get there,” Nyoni told Al Jazeera.

“If industries like CSC and others are reopened as they [the government] promise then there will be real jobs for people.”

While some see signs of change on the horizon, others remain sceptical as long bank queues and cash shortages persist.

“After 100 days I can’t see the change. If anything, things are changing for the worse and not for the better,” said Marshall Zvandasara, 27, who makes sofas in a dimly-lit workshop behind the CSC.

“Now that this 100 days is gone, are we going to start counting another 100 days again waiting to see change, how many times will we count before the economy gets better?”

For his part, Mnangagwa has called for patience, citing years of economic decline.

In a recent video chronicling the successes and challenges of his first 100 days, Mnangagwa reminded people change was not an overnight process.

“We must, of course, be realistic and recognise that it takes more than 100 days to recover the economy,” Mnangagwa said.

Samukele Hadebe, director of the Public Policy Research Institute of Zimbabwe, which has worked with the government on the 100-day plan, echoed the president’s sentiment.

“The idea of the 100-days plan is to inspire confidence, not just to a few people, but to all of us as stakeholders in Zimbabwe,” Hadebe told Al Jazeera.

“One hundred days doesn’t mean there’ll be immediate changes on the ground, but it’s to say there are significant indicators that show it is possible to embark on change and the political leadership to do so is there.”

The idea for the plan was partly inspired by the Adam Smith Institute, which in 2007 published a series of recommendations for a post-Mugabe administration.

“We are tired of being an embarrassment to the world because of bad leadership,” Hadebe said.

Unlike Mugabe, who had frosty relations with the West, Mnangagwa has prioritised re-engagement with Western powers.

Mnangagwa has promised peaceful and credible elections in September, but the EU maintains Zimbabwe will not receive significant support until meaningful electoral and democratic reforms are made.

The US recently extended targeted measures against senior ruling Zanu-PF members and associated companies because they “continue to pose an unusual and extraordinary threat” to US foreign policy, according to a letter issued by President Donald Trump.

Despite the setback, Mnangagwa continues to chant the mantra that Zimbabwe is open for business, but human rights activist Evan Mawarire questions whether Zimbabwe is free enough.

Mawarire, a pastor who faced charges of subversion under Mugabe for calling for protests, told a human rights summit in Switzerland last month that Zimbabwe needs “a breakthrough of democracy and the rule of law”.

Mawarire, like other activists, urges Mnangagwa to do more for human rights, including the alignment of laws with the constitution, as well as the repeal of repressive laws and greater tolerance of alternate views.

Under Mnangagwa’s leadership, there have been several tense confrontations between the police and activists, who are critical of the president’s alleged role in past ethnic massacres, and the government’s current prohibition on the coronation of the traditional king of the minority Ndebele group.

“If at the early stages of the so-called new dispensation we fall at the first hurdle, then to me as a traditional leader here, I begin to question whether indeed there is a new dispensation … As a chief my goodwill only lasts insofar as I see this government respecting me [and] respecting my culture,” Ndiweni said.

Ziyambi Ziyambi, the justice minister, says that despite some hurdles, Mnangagwa’s government has a greater commitment to a “people-centred” human rights policy.

However, firm action might seem a long way off to many Zimbabweans, 100 days after the fall of Mugabe. — Al Jazeera