A backyard chapel that doubles as a daycare centre is not the place that comes to mind when you’re on the hunt for a staunch football supporter.

But in Westbury, Johannesburg, everyone is a football fan. The local team, La Masia, has won over the hearts of the residents.

“Ever since the first game … yoh! That game was off the hook,” says Fidel Afrika, who helps her mother to look after children at the daycare centre. “I think it was 2-0. And ever since then, I recruited my mother and then my brother and his girlfriend. It became a family thing. We watched every game until the final.”

For Afrika, La Masia has come to mean more than just the local football club.

Founded three years ago, the team has progressed with increasing success. Last year, they followed up a debut quarterfinal finish in the popular Steven Pienaar Community Cup with a run to the final. They would ultimately lose 1-0 to Codessa FC, but the game was instrumental in laying the foundation for the huge range of support they have since built up.

But the big bang would come in December when La Masia brought home the Discovery Walter Sisulu Soccer Challenge from Pimville, Soweto, and the healthy R100 000 prize that came with it.

When La Masia made the final, almost the entire neighbourhood tried to attend the game, says Afrika.

“That place was packed, packed to capacity. The stands were full, people were standing around the field. It was a major event. Children, adults, old people, babies.

“When they won it was a buzz for Westbury, everybody was talking about them — social media, WhatsApp, Facebook. Even when you walked in the streets, children would say, ‘Did you hear La Masia won?’ And not just for that day, for weeks on end.” 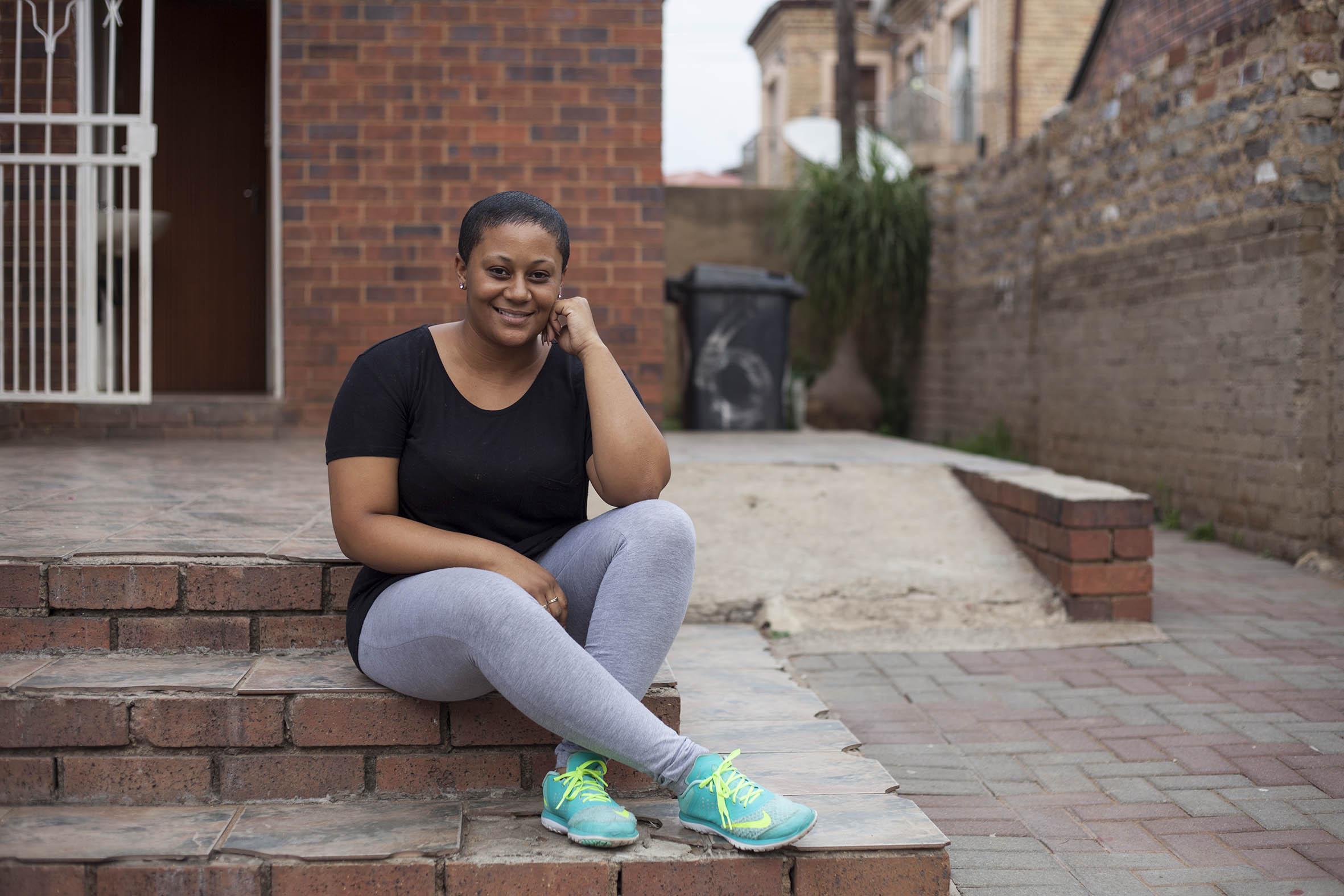 Just before the victory, the team made national headlines when France-based Keagan Dolly, who hails from the neighbourhood, played a few games for them in the preceding rounds. For most residents, though, it seems like star power has little to do with the appeal of the team. Afrika is no different.

“It was victory for us. For Westbury as a whole. You know people always look at Westbury in a negative view, like ‘ah, that place they just do drugs, the guys just sit on corners’. But they brought the positive out of Westbury. The area has a lot of potential. It’s just people just see the cover of the book — they don’t take any time to read it.”

A few blocks down the road from the daycare centre, and a stone’s throw from the Westbury Open Grounds, where the team trains, is Corburn Woodington’s house. While a few young kids kick a ball against the concrete goalposts outside, his family sits in the homely living room, eager to talk inglowing terms about his achievements. A cabinet adorned with various family trophies and medals stands neatly to the right of the television. The standout silverware is no doubt the large Player of the Tournament trophy he got for the December challenge. 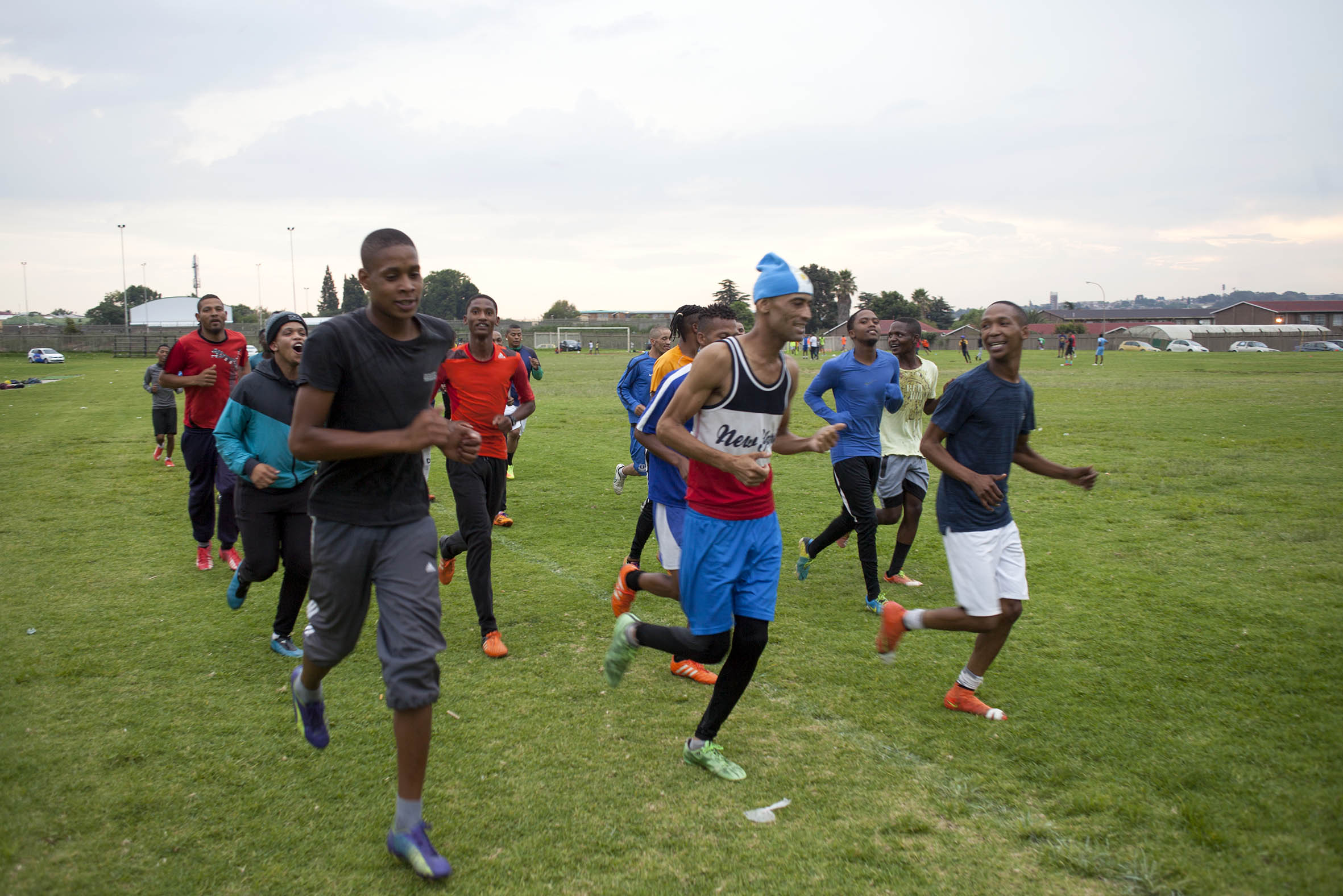 “After the guys left Argentinos [another club in the area], we decided to be La Masia supporters because of the fact that we’re one of the biggest fans of my cousin Corburn,” says Leigh-Chen Abrahams, explaining that the club was founded after a group of players split from the Argentinos.

“Oh, that was a very exciting tournament. The referees were against us and everything but we still came out victorious and brought the cup back to Westbury.

“We partied until four in the morning.”

Sitting across from Leigh-Chen, Devanay Woodington says there were still people doubting the team, right up until the final whistle.

“We were so into it that we made T-shirts,” she says proudly. “So each time we would pass someone in the street, they would be like ‘La Masia gaan vandag verloor’. Our response would just be that ‘we’ll see at the end of the game’.

“Close to the end of the game, we weren’t sure that we were going to take the tournament but that last goal was amazing. Everyone’s emotions were just different — some were screaming, others were crying from happiness and joy.”

Stafford Woodington was also eager to extol the non-footballing benefits his nephew and his teammates bring with the glory.

“The important thing from this tournament is that it brought the community together,” he says. “You could see the vibe in the community. Especially in Westbury, that’s notorious for drugs and crime, they brought a different picture and made the community proud of this achievement.

“If you go to the ground now, you’ll see a lot of young players that are inspired to play for La Masia. What happened at the end of 2017 motivated and inspired a lot of youngsters. That’s the main thing that the guys who started the club wanted to achieve.” 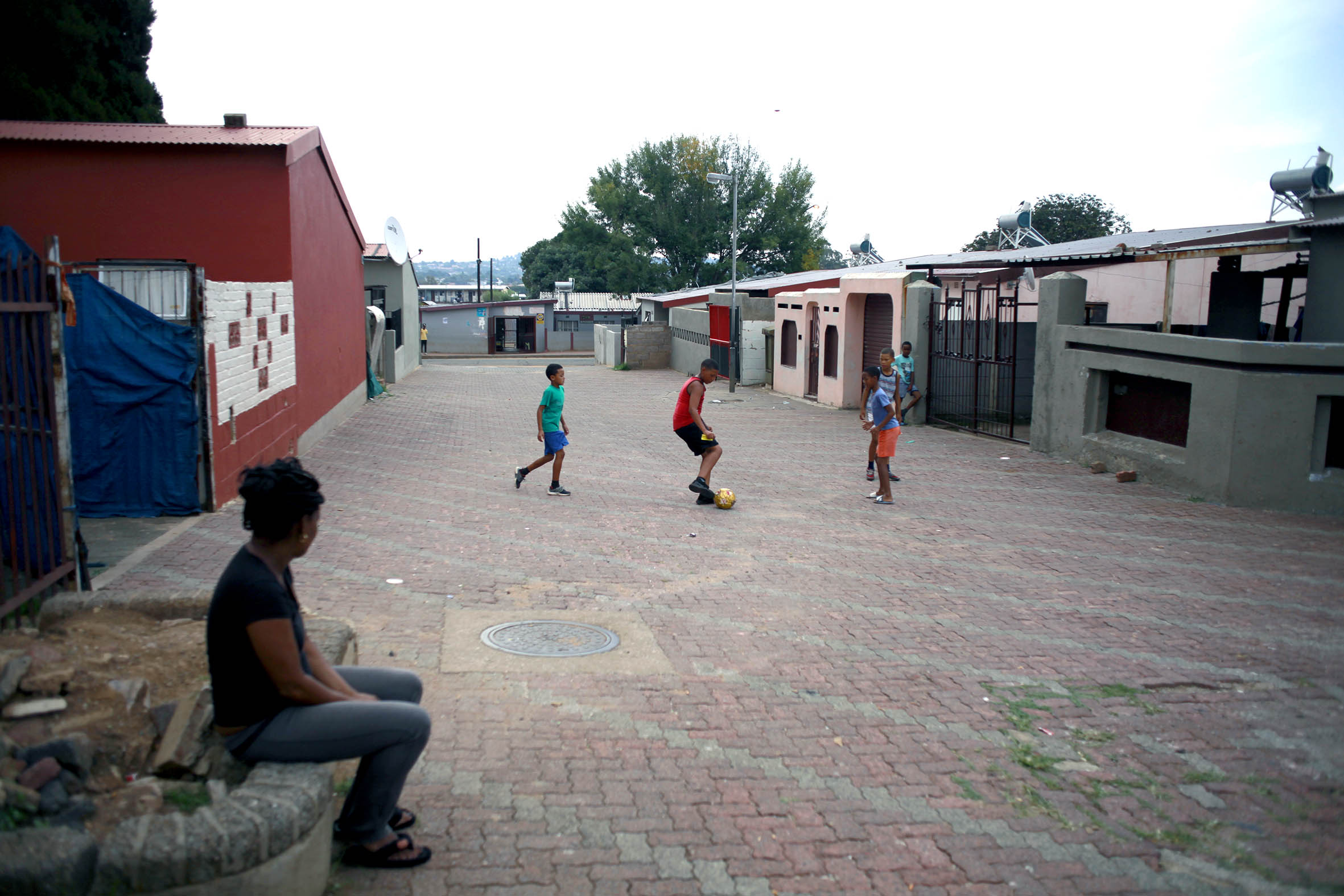 For now, the club has its eyes firmly set on the next tournament — an Easter challenge in Boksburg. Training for the competition began in earnest last week at the Open Grounds. On Tuesday, the team met up for a high-intensity session, aimed at pushing the players into a peak zone of fitness as soon as possible.

“There’s two teams training right now — Atletico that’s playing in the local league and La Masia that plays in the tournaments,” says cofounder and co-coach Baldwin Johnson as he points to the field. “We look at the progress of the players that are in the local leagues and we monitor them throughout the season. Those that perform, well, we give a call-up to come play in the big boys’ tournament.

“It’s great exposure for the boys. In South Africa this is one tough career. For young talented boys, not just coloureds, any race …

Baldwin was also keen to express the philosophy of the club.

“In South Africa, we don’t want the talented players, we want runners, we want the muscle guys, you know guys that can break legs and give you 60 miles per hour. We [South Africa] don’t want the smart guys. And that’s what we stand for here at La Masia. We have a lot of smart, intelligent players.” 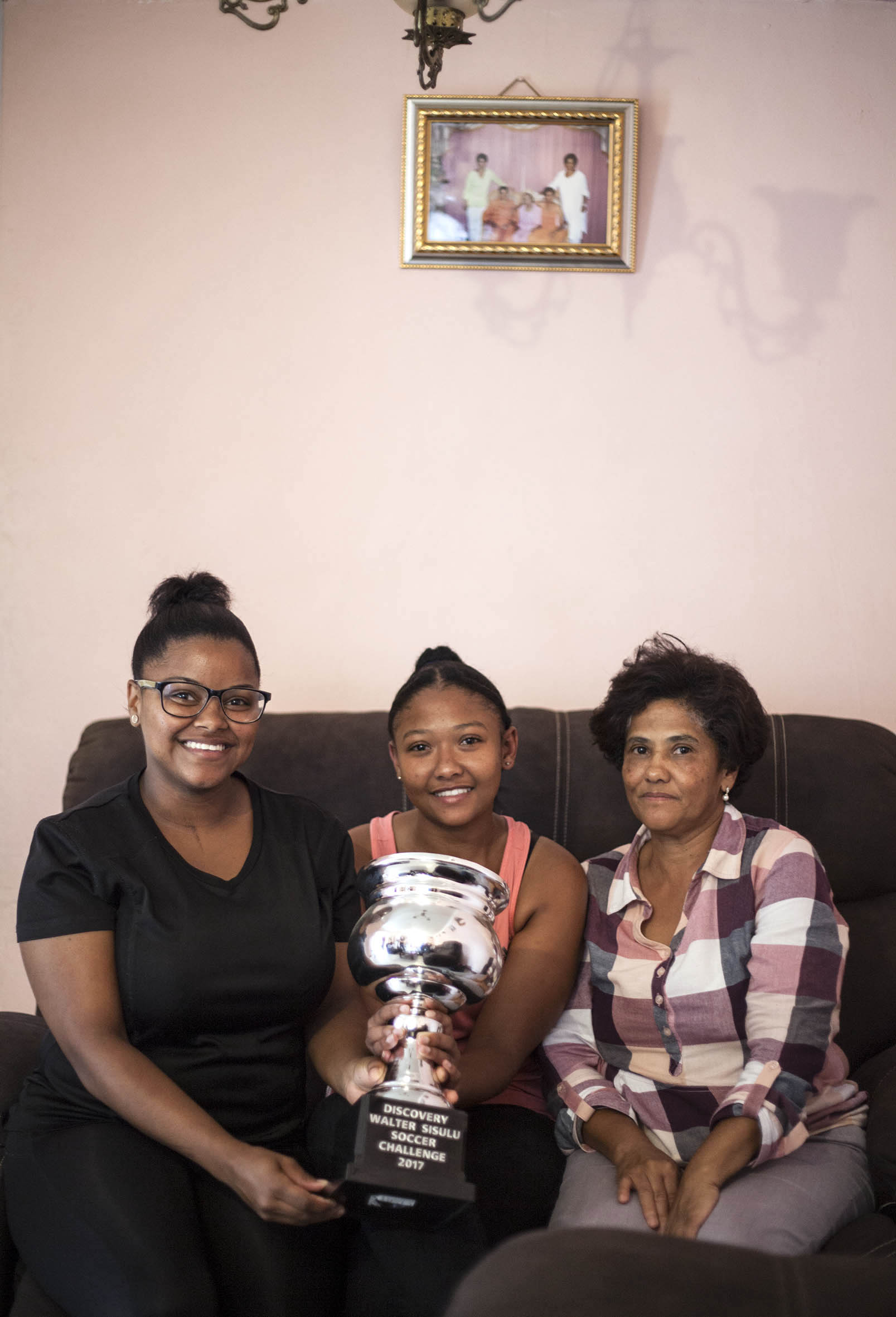 The name La Masia is derived from Barcelona FC’s training facilities and is often used to describe the club’s youth academy as well. Many a game day will see the Westbury outfit decked out in Barça’s famous royal-blue and maroon stripes.

For another of the founders and coaches, Lorenzo Marsh, the mission statement of their club is partly inspired by the Catalan team. The European giants’ famous slogan is “more than a club”.

“It was just four guys coming together as friends, thinking they need to make a change in the surrounding community,” Marsh says. “That’s just us wanting to take the youngsters off the street and ensuring that some of them live their dreams of becoming professional football players. In the long run, we would like to educate the players as well if their dreams do no work out.”

Meanwhile, the star of December, Corburn Woodington, is humble about his own achievements but not those of La Masia.

“I didn’t think we would go to Soweto, the home of South African football, and conquer like we did. It was a remarkable experience, something I can’t explain,” he says. “We aim to get the team to the PSL [Premier Soccer League]. I’m not hiding that fact.”

Woodington had a varied professional career before returning to Westbury, which he says he does not forget. He was previously on the books of Ajax Cape Town, Bloemfontein Celtic and even SuperSport United during a PSL winning run.

For now, bringing pride to the neighbourhood is as good as any professional trophy.

“In a community like ours, uplifting football, it’s always a good feeling knowing that you’re doing well, for the youth especially. I’m proud about the project we have here and, God willing, it will continue to grow.

“It’s fantastic, you know. They bring a lot of people to the field, without having to worry about any negatives. In that sense it brings a lot of joy to my heart. It gives me goosebumps every time I enter the field and see the community standing with us and supporting us.”