From sand to sky: Divine thread links the San with nature

Here in the Kalahari, where the stars shine more brightly and the dunes still cast shadows long after the searing sun has melted into the horizon, the red hills carry the same din as a train station.

Here a toktokkie paints a tiny crooked path along the edge of the dust-fine dune. And here a springhaas moves carefully, lingering on the top with its long duster-like tail, settling daintily, likely surveying the scene below and beyond, before departing in a rapid trail of elongated hare prints. A millipede also comes this way, its careful symphony of movements tracing elegant lines in the sand. There is an eland, too. And, here, another print that looks like an antelope’s cloven hoof. But, below this too-perfect imprint lies a buck spoor spider, its deceitful trap set, carefully biding its time. Meanwhile, the long strands of vegetation have left their brush marks in the powdery sand, forming a natural wind vane.

For the Khomani San, there is a knit here, an intimate connection of people and nature, each tiny thread a seamless manifestation of God. 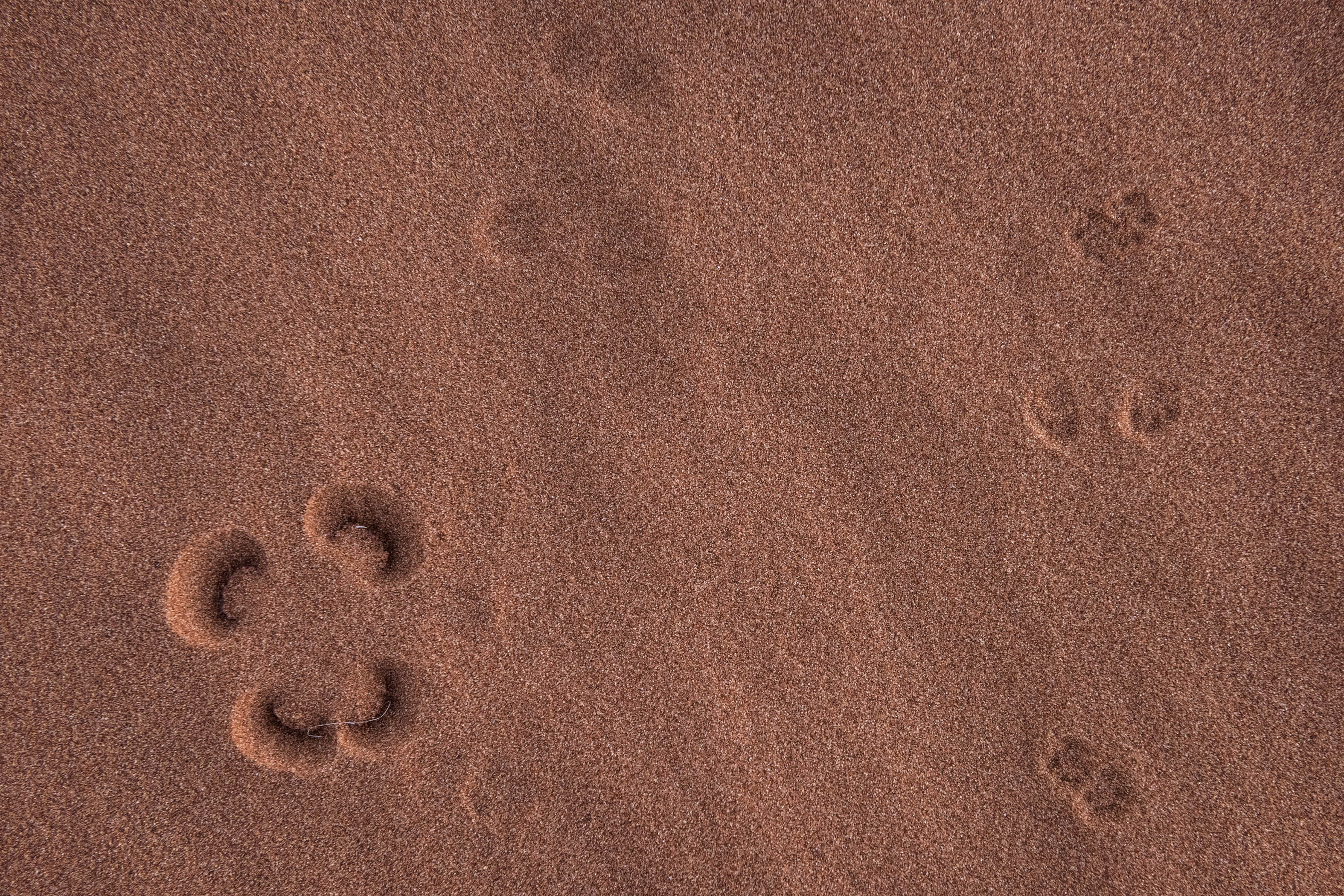 At night, an elder points to the heavens and gestures to beyond the Morning and Evening stars, even beyond the Milky Way, where an even greater power lies.

Regularly, this connection with God, who manifests herself in the plurality of nature, is affirmed when the San dancers gather and a slow fire licks at the sky. And, while the sun charts it path, slow and considered, the traditional dance begins. A circle is formed. It is less a dance than a step and shuffle. Ta-ta, ta-ta, ta, ta, ta-ta-ta.

!Qopan Kruiper breaks out into a step at any opportunity. There are jokes aplenty, this time at the expense of a doellose tril (purposeless prick), the “trrr” rattling on the tongue and palate of the accuser. Or Barbara, whose too-round shape meant she thrust a hip instead of the kick she was supposed to perform.

But there’s serious business at hand.

During the trance dance, as the clap and the dulled thump-thump of heel strikes grow, the hartebees appears, its nostrils flaring and tail whipping. Ta-ta, ta-ta, ta, ta, ta, ta-ta. Then the lion, its back arched and jaw grabbing huge mouthfuls of air. Many are wary of the risk of going so deep into the trance, so far into the realm of the spirit, that you may never return. 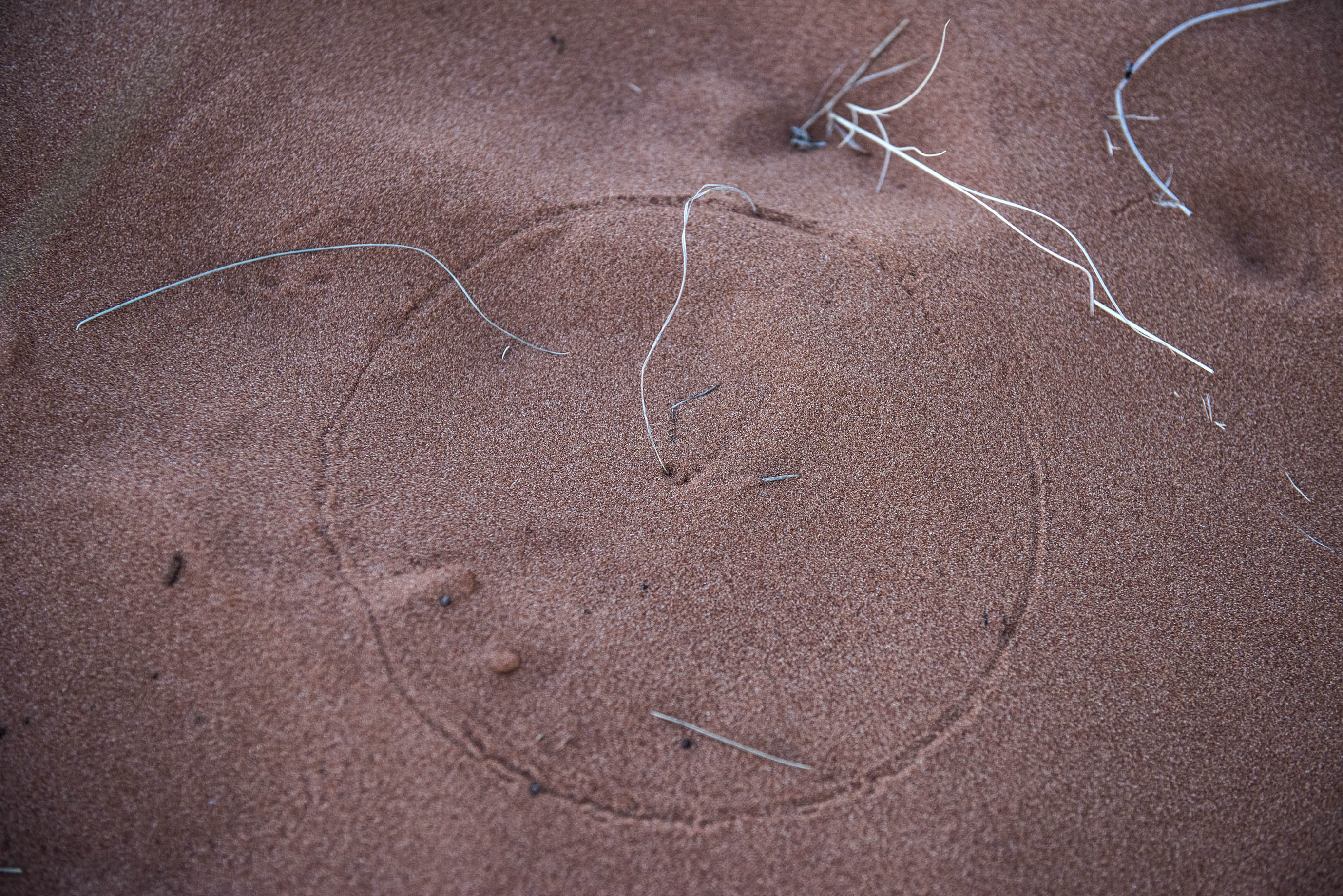 [Wind vane: A simple blade of grass is used to trace the direction of the wind (Madelene Cronjé)]

One dancer who channelled the !xooke (lion) has still not returned to his human form.

Kruiper left school in grade five, begging his father rather to let him learn from him, here, in the veld, than have to suffer the Protestant education that so frustrated him.

His father, like his father before him, would teach him the way of his people. How to track animals across the desertscape, identifying the plants that will nourish, replenish and treat various ailments. How the jackal is a deceitful friend who can never be trusted. How the lonely steenbok, so elated at having found a mate, was struck by a deep sadness when it lost her, and decided to spend the rest of its days in mourning and alone. How the spirit of lion came to be inside the !gamka wood and bring its carrier strength. 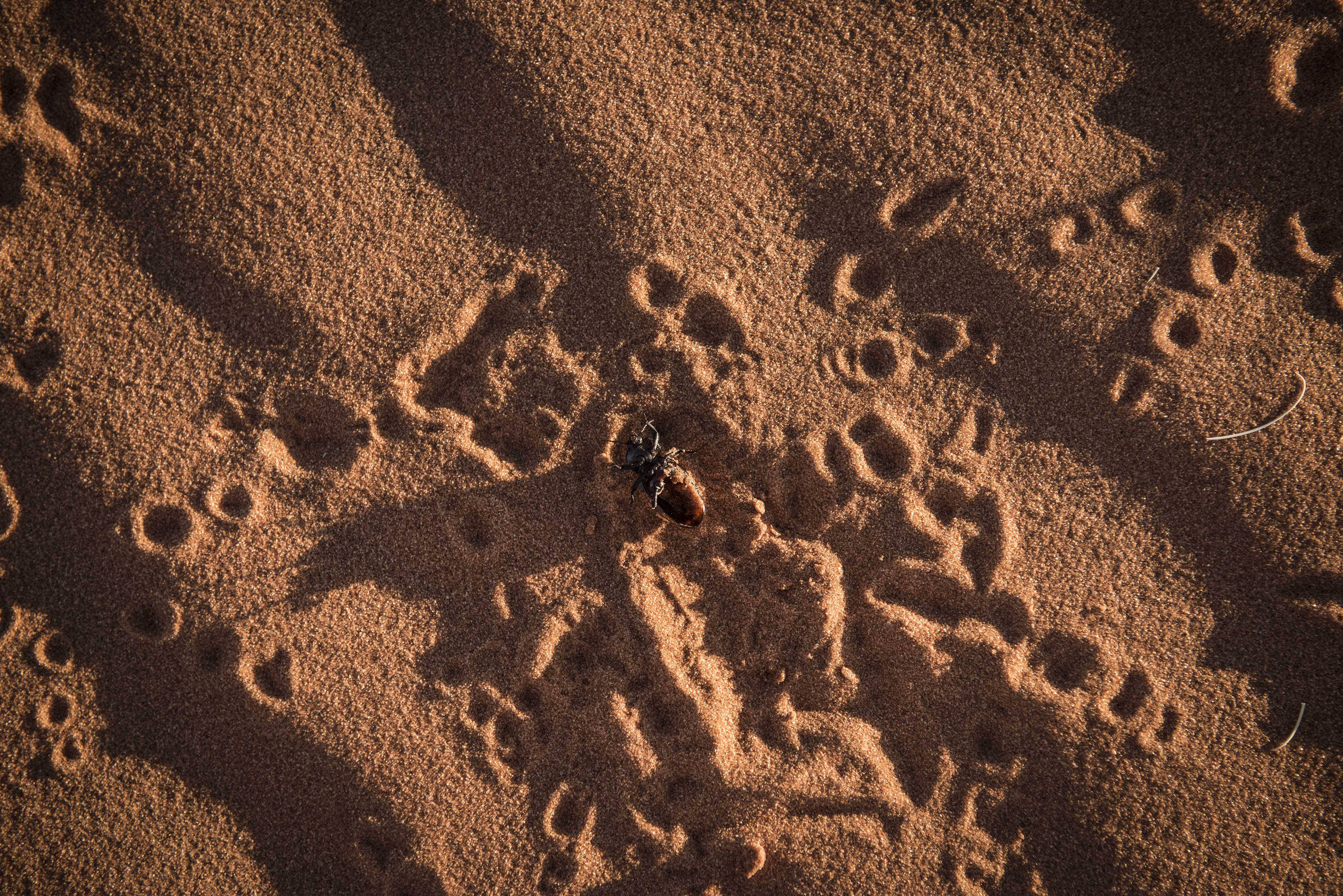 They are you and you are them, his father would impart.

“My mother told me: ‘Son, you can lose many things but, once you lose your language, you have lost your culture and yourself.’”

In the tiny settlement of Andriesvale, 200km north of Upington in the Northern Cape, a smattering of stone, wood and zinc houses is home to many Khomani San, here on the edge of the Kgalagadi National Park. The all-too-familiar ailments of substance abuse and unemployment cast a long shadow here.

Along a side road, men and women dressed in traditional skins lounge near the entrance of a popular tourist lodge. It’s nearly time for the Kalahari Desert Festival, an opportunity to showcase the Khomani San culture and also to bring some much-needed tourism to the area.

A police van arrives. The policeman wants to “sabela” with “madoda”. This is prison gang language. There’s been a report of domestic violence and the suspect has gone missing. “Die nommer is vol,” the policeman shouts before driving off.

Later a minibus taxi with an address in Mitchells Plain in the Cape pulls up. In a whirlwind of colours, a young man and his videographer spill out, immediately breaking out into rap, all the while speaking to his phone for a live video feed. “I’m here with the Khoi-Khoi, the original people …”

“Yes, but do you know Early B?” is all Kruiper offers, while posing with the rapper, who has now taken to reciting the list of 55 African countries before racing back to the taxi and departing, leaving behind a stunned silence.

Less than a kilometre away, beyond the tar road and dust paths, Kruiper has stripped off his jeans, T-shirt and All Stars for his loincloth. “We were the first people to wear G-strings,” he quips. For Kruiper, this is where he belongs, “a professor of nature”, watching the congregation of vultures gathering at their church atop a dune. 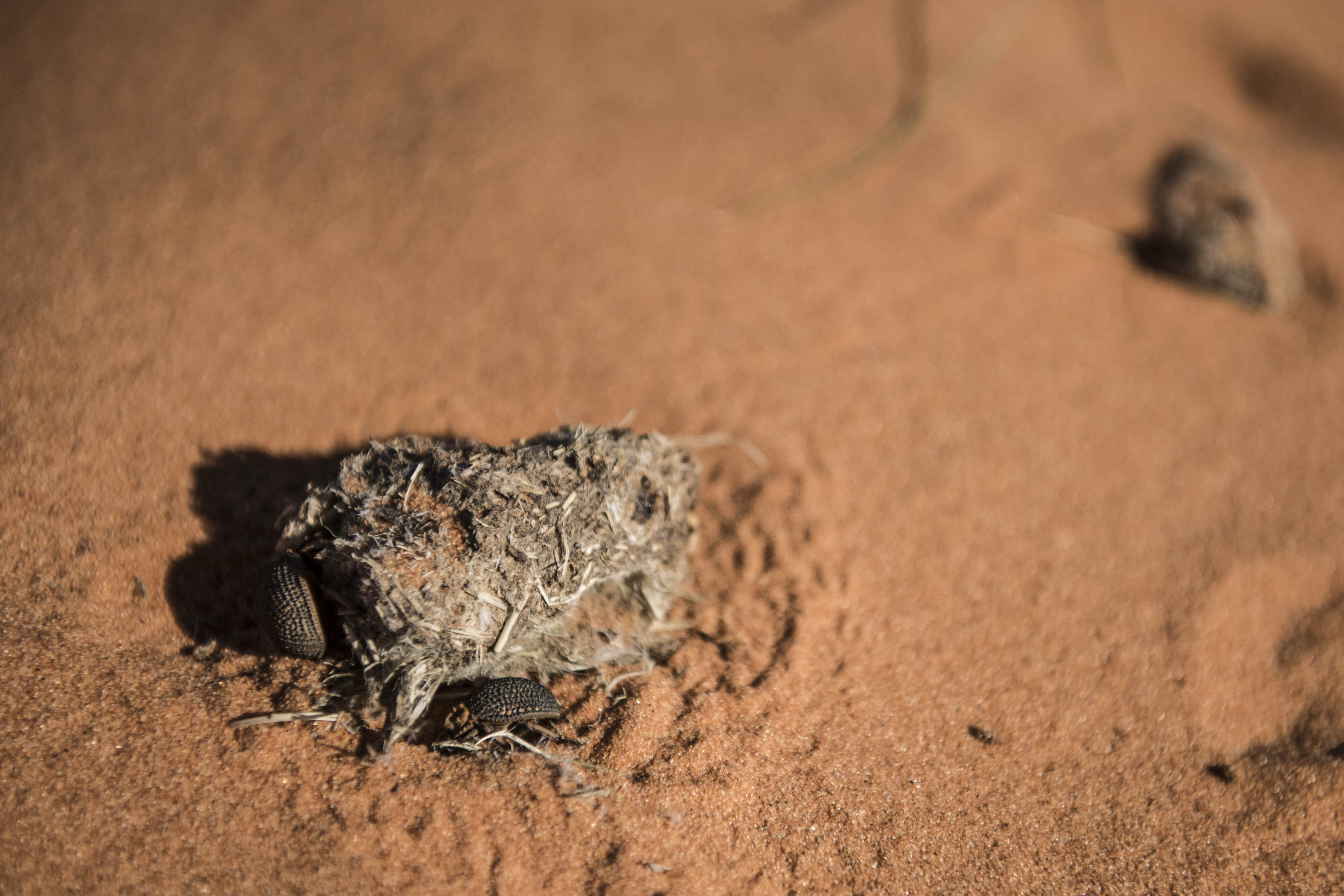 [Nothing goes to waste: Dung beetles at their leisure feasting on vulture dung (Madelene Cronjé)]

He digs carefully at the base of the !koega plant, burrowing nearly double its height down, down into the ground to reveal a long tubular root. Here in the Kalahari roots run deep, carefully storing their succulent treasure away from the unremitting sun. Kruiper cradles the plant in one hand, the other carefully brushing off the fine dry sand before expertly twisting and breaking off the root.

He will use this root to cure a pain that is not yet with him. Then he reaches up to his short dreadlocks, twists and deposits a lock of his hair into the earth before replanting the !koega. “For whatever you take, you must offer something of yourself in return,” Kruiper states.

Where others may see an undulating landscape of dunes and flatlands, to the Khomani San these are distinct streets, each defined by the dominant animal whose droppings lie haphazardly scattered around bushes. Or the specific plants that might only grow here and not be seen again for many a rise and fall of this desert landscape. 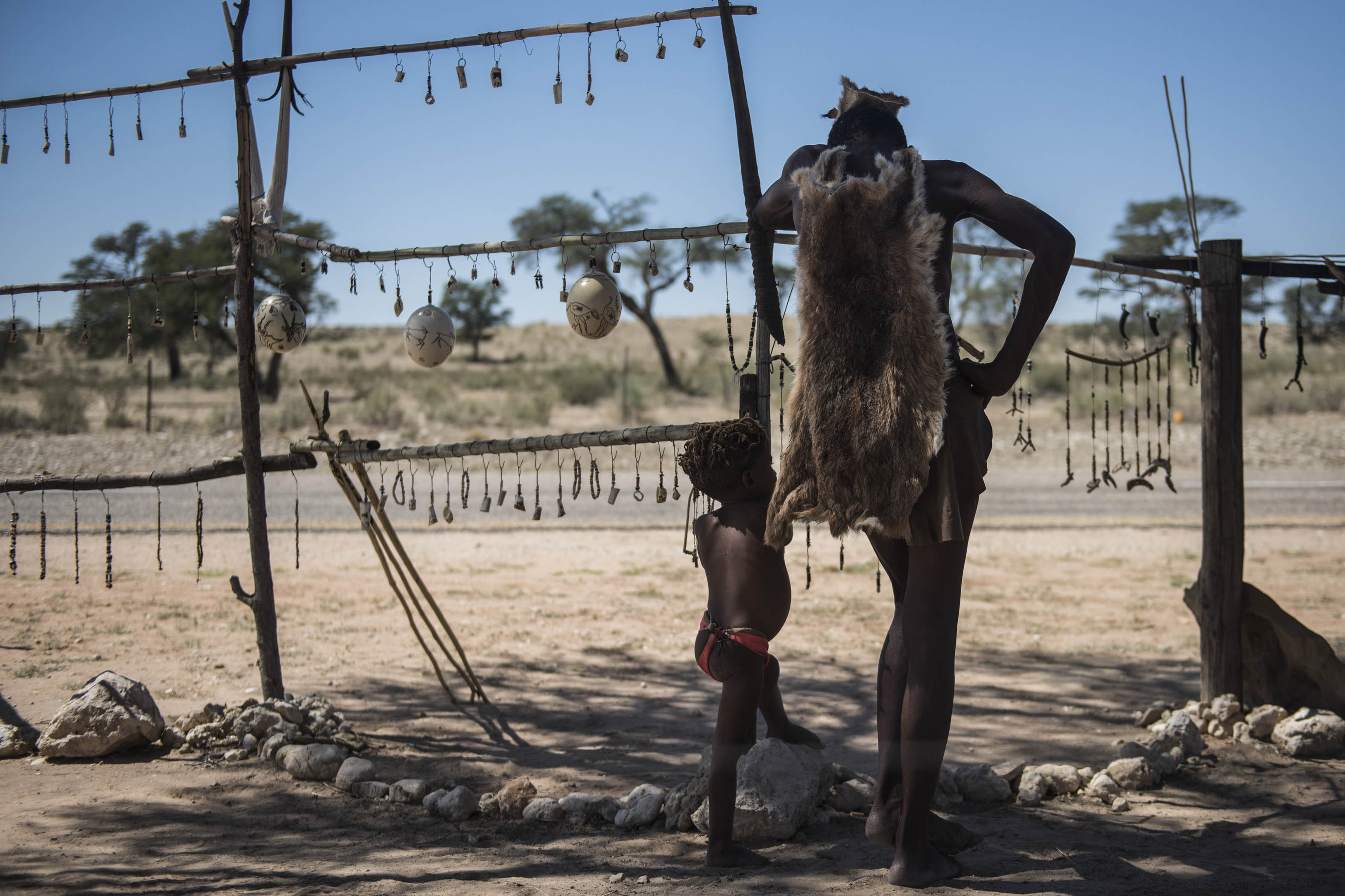 [Sifting sands: Balancing tradition with a nod to commerce, the San sell bone trinkets and ostrich eggs to tourists but remain steeped in practices such as using twigs for their spiritual properties (Madelene Cronjé)]

“All that we need to know, all the questions we have, the answer is here,” says community elder Izak Rooikat Kruiper, gesturing to a fiery horizon that knows no bounds.

“We are born here in this nature and we are a part of it. From the smallest little beetle to the eland. We are all a part of Her.”