Local is lekker: This African innovation could save hundreds of babies each year

A minuscule fist has escaped, startled, from under the pink blanket. Damaris Atienogingerly reaches into the clear plastic crib for her baby, whose head is dwarfed in a red knitted hat.

“She doesn’t have a name yet,” says Atieno, looking slightly overwhelmed in the way mothers of newborn babies often do. For the young woman, who comes from a remote farming area of Kenya, the hospital surroundings are unfamiliar, and the array of machines and pipes is bewildering.

Two prongs are inserted in her baby’s tiny nostrils, and an oxygen tube covers part of her face. She needs it to breathe.

The baby weighed only 1.6kg when she was born six days ago. Atieno was 10 weeks shy of her due date when she went into labour. She was rushed to the Siaya County Referral Hospital in western Kenya.

This is the only reason the very premature baby is alive: here she had access to oxygen therapy.

“We can save the lives of preterm babies who can’t breathe normally,” explains Gladys Odembo, the nurse in charge of the neonatal unit. “This is because oxygen is at arm’s reach.”

Over the past 60 years, oxygen has probably become the single most common medicinal product given to newborn preterm babies, according to a 2007 article published in the journal Archives of Disease in Childhood: Fetal and Neonatal.

Why? Because the earlier babies are born, the less prepared their bodies are for the outside world, the World Health Organisation (WHO) explains on its website.

They may have difficulty breathing because the lungs may not be fully developed and can lack surfactant — a substance that allows the lungs to expand. A lack of oxygen can have a lasting impact on children, including, for instance, developmental delays, learning difficulties and in some cases cerebral palsy, a disorder that affects a child’s movement, muscle tone or posture, according to the American medical research organisation Mayo Clinic.

Odembo checks the pulse oximeter on the baby’s tiny wrist. The device measures the oxygen saturation of the blood.

With a satisfied smile, she says: “She has gained weight and is doing well.” 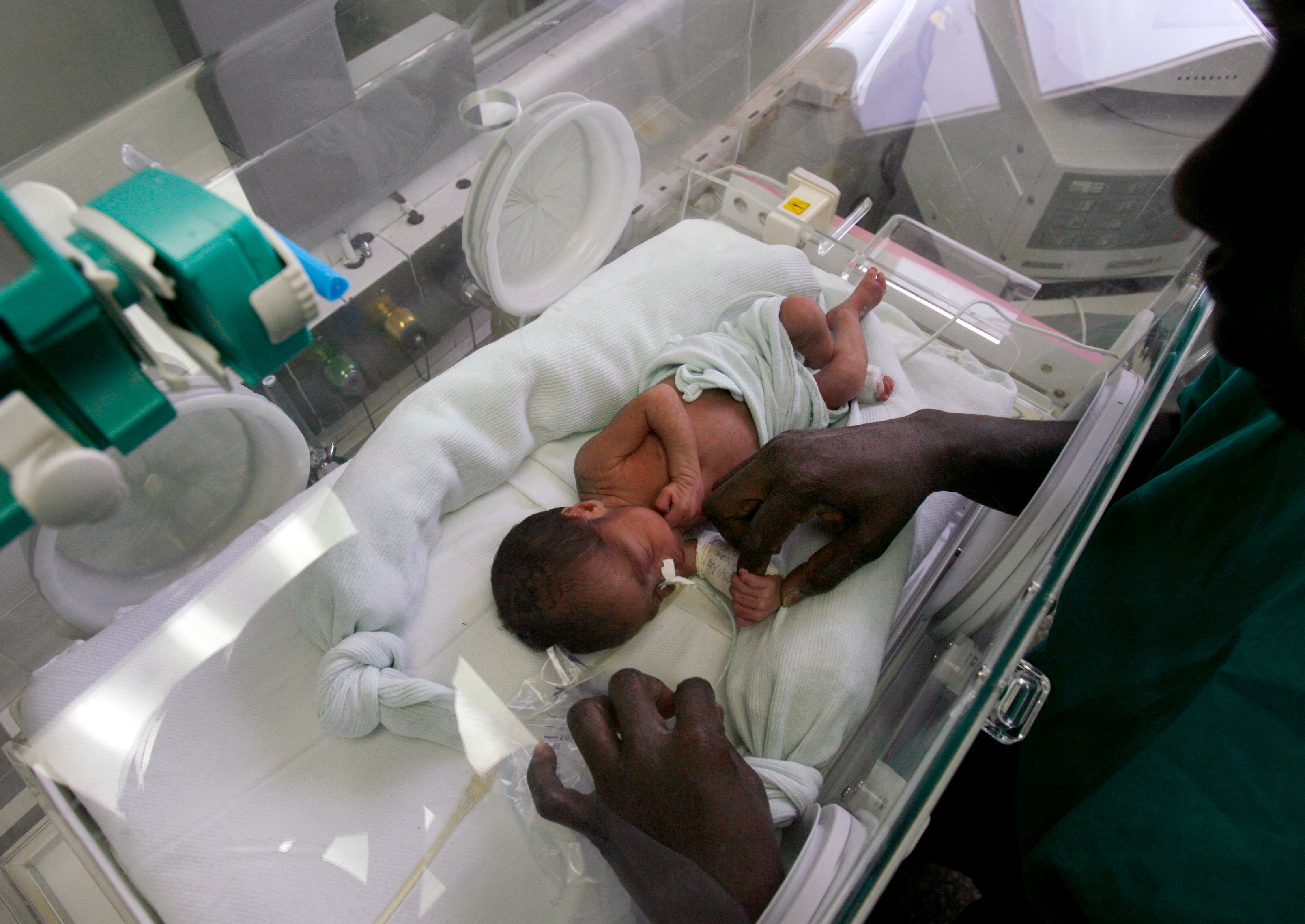 In Europe and the United States, most hospitals make oxygen onsite. But in Africa, less than half of health facilities have reliable access to medical-grade oxygen, the WHO estimates. A 2010 survey found that only 44% of facilities in 12 African countries said they had access to oxygen on a continuous basis.

Outside of central hospitals, health facilities often don’t have the money or technology to buy oxygen and health workers don’t know how to use it, writes Bernard Olayo, a Kenyan public health specialist, in a blog published in The Lancet in 2017. He describes a rural health centre in western Kenya, 50km from the nearest hospital that has oxygen, where staff “used to send two or three children with severe pneumonia on the long journey to the referral hospital each day. Many died before reaching these better-equipped facilities.”

Although oxygen has been on the WHO’s essential medicines list for more than 30 years, it was only recommended as a must-have for procedures requiring general anaesthesia.

Updated every two years, the document outlines the drugs that global experts think are crucial forany health system and helps to guide national drug procurement policies around the world.

Medical experts and the international non-profit health organisation PATH have long argued that oxygen is essential to save the lives of the most vulnerable patients, including newborns and children.

More than one in 10 deaths among children under five are caused by the respiratory infection pneumonia, WHO 2015 statistics show. Globally, the condition remains the single largest infectious cause of death in children worldwide.

“Many cases of pneumonia are easily treated through affordable medicines, such as antibiotics,” explains Bonnie Keith, senior policy and programme officer at PATH, in a 2016 blog on the organisation’s website.

“However, by the time many children in low- and middle-income countries reach a health facility and are diagnosed, their pneumonia is severe, and antibiotics may not be enough. At this stage, children may be hypoxic and struggling to breathe, requiring swift oxygen treatment.”

Hypoxaemia develops when a person’s blood oxygen levels are very low and the condition, Keith writes, can be fatal if untreated. But oxygen therapy can reduce childhood pneumonia deaths by at least a third in rural hospitals in developing countries, studies show.

After a global campaign led by PATH, the WHO included oxygen as an essential medicine for patients — especially children — with hypoxaemia in its latest list.

Olayo writes this is a life-changing decision but warns this means developing countries will have to find ways to provide oxygen at rural health clinics. In most resource scarce countries, the gas is supplied mainly using pressurised cylinders that are often moved from bed to bed as needed. These canisters are filled at oxygen-generating plants and then transported long distances on bad roads. Poor transport infrastructure and weak, and often expensive, supply chain processes lead to shortages of oxygen canisters, he notes.

“Hospitals in developed countries have wall outlets supplied with liquid oxygen from frozen storage tanks,” Olayo explains. “We cannot simply take technologies from Europe or the United States and apply them without thought.” 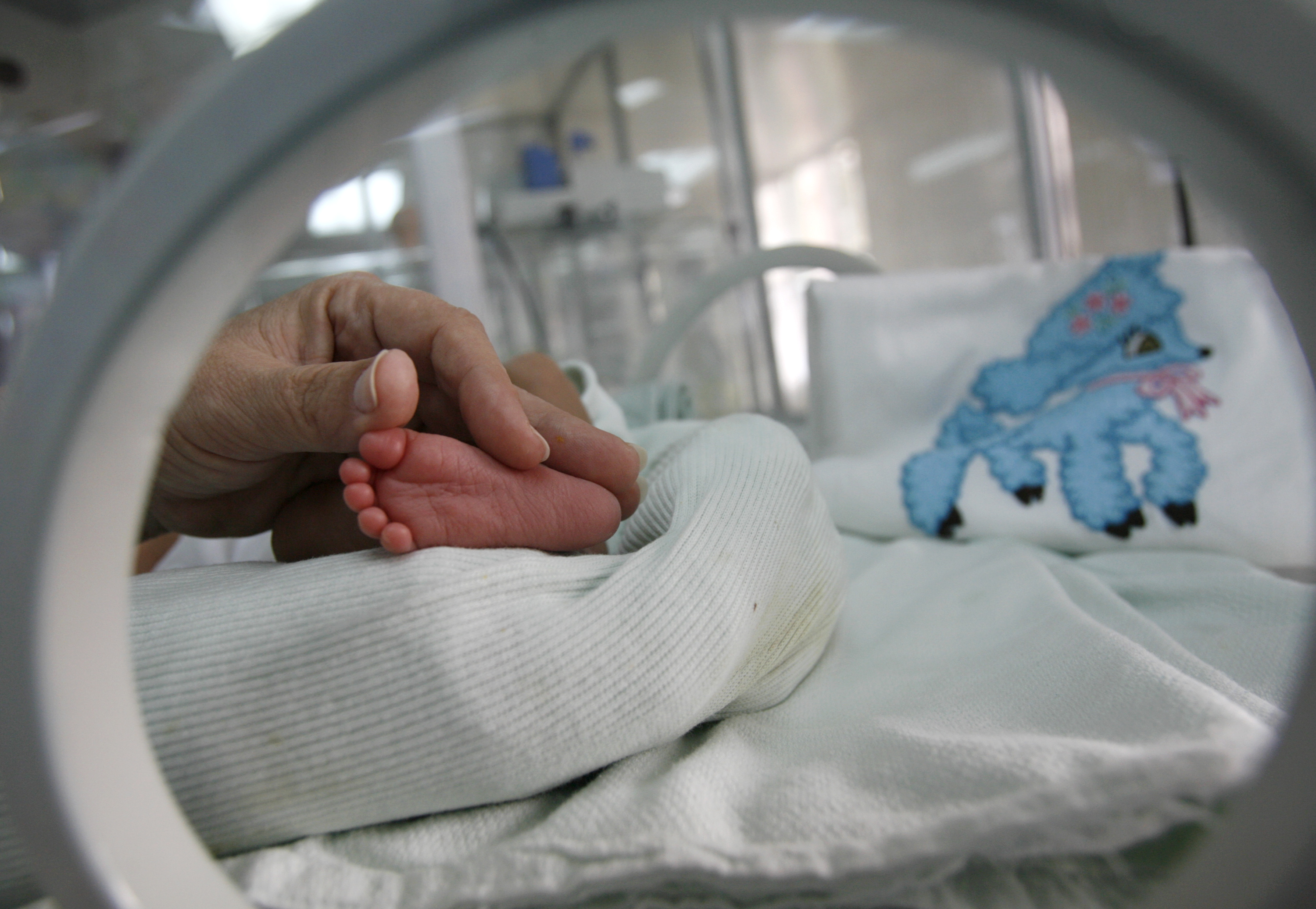 Hundreds of infants die each year gasping for air. Now, many won’t have to. (Claudia Daut, Reuters)

For years Siaya County Referral Hospital, like most other rural health centres in Kenya, couldn’t afford to give its patients oxygen. It would buy four cylinders a week, each costing 4 800 Kenyan shillings ($48), says Andrew Hongo, the facility’s health administrative officer.

The hospital had to pay to have these canisters transported from Kisumu, the main town in the region, after buying them from a Nairobibased company nearly 500km away. This meant that patients often had to wait for hours — even in emergencies — or go without.

Here, as in most of East Africa, the supply of oxygen has mainly been in the hands of the private sector.

But four years ago an oxygen plant was opened at the referral hospital. Since then the facility has never had an oxygen stock-out and it now also provides the life-saving gas to 68 more health facilities in seven counties — an area with more than six million people.

Called Hewa Tele — Kiswahili for “abundant air” — the project was the brainchild of Olayo, who started the nonprofit health organisation Centre for Public Health (CPHD). The programme not only provides the oxygen, Adudans says, but also vital training for health workers to use the gas safely. Just as important, Hewa Tele also distributes and maintains the equipment needed to administer the oxygen.

To keep costs low and to make sure the programme is sustainable, the CPHD got the public sector involved. This is the first public-private partnership providing medical oxygen in Kenya, CPHD director Steve Adudans says.

Now, Siaya County pays the salaries of the five workers who run the plant and provides the premises free of charge. Meanwhile, being able to run the oxygen plant from hospital grounds has cut out transport costs, Adudans explains.

As part of an agreement with Hewa Tele, the hospital pays half price for oxygen in exchange for hosting the plant. Other facilities  are charged 3 200 Kenya Shillings (US$ 32) per cylinder.

The project also receives funding from the philanthropic arm of the US power and manufacturing company General Electric as well as technical help from the charity Assist International.

There has been so much interest in the Hewa Tele model that global firm Frog Design is working on business plans to make sure the project can be replicated elsewhere. Meanwhile, more plants have been built in neighbouring counties and Rwanda has also implemented the project. 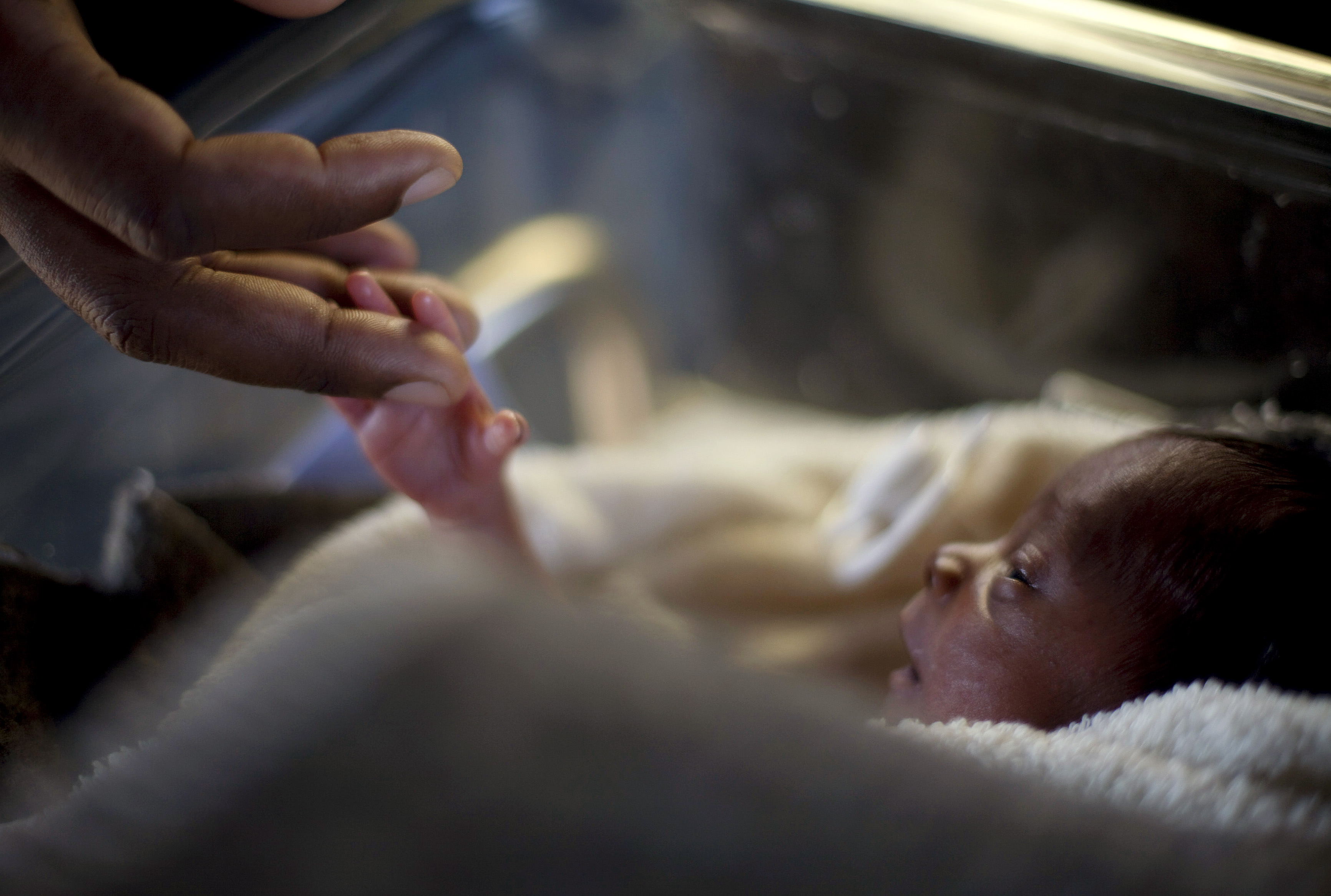 Oxygen. You may take it for granted, but for “preemie” babies, it can be a matter of life or death. (Carlos Garcia Rawlins, Reuters)

At the Siaya County Referral Hospital all the wards now have oxygen, says nurse Florence Matagaro, while she discharges an asthma patient. “This has reduced congestion. We used to put all the patients who needed oxygen in one ward that had oxygen cylinders. Now we don’t have to push the cylinders around or waste time looking for them.”

The impact of the oxygen supply here is still being assessed but deputy county director of health Bob Awino insists that the “availability of oxygen has reduced pneumonia-related fatalities and the time patients stay in hospitals”.

Damaris Atieno, the mother of the preterm baby, doesn’t know how long she will have to stay in hospital. Nurses have explained that the infant may also be able to get oxygen therapy at home once she is strong enough to be discharged. When that happens, her mother will be given a pulse oximeter and shown how to use it.

The prospect is daunting, but Atieno has come to trust the nurses’ judgement.

“They were the ones who told me she needed oxygen,” the young mother says. She frowns and tugs on her faded green hospital gown. “Thank God she is alive.”

When it comes to vaccines, there really is safety in numbers. Here’s why