Ignored and sent home in a barrow

The corridors of the Mahikeng Provincial Hospital ring hollowly. There is no staff in sight, except for two security guards patrolling each ward entrance. Inside one of the wards, the powder-blue walls are littered with notices apologising to patients about the interruption of health services.

In the “chronic medical” ward, Ntombizodwa Matthews lies on one of the beds, wearing an ANC-branded T-shirt and jeans. Her sister, husband and neighbour are at her bedside.

“Ntombi, re tlile go go lata [we came to fetch you],” Nomvula Matthews whispers to her sister. “Re ya gae neh [We are going home, okay]?”

Matthews does not respond.

The three lift her up and place her in a wheelchair. Before departing, their neighbour Nokuthula Shezi prays. She asks God to lead the way and bring healing to the sick.

Other patients who have been discharged watch as Mabuti Mphafa, Matthews’s husband, wheels her towards the entrance of the hospital.

At the gate, Shezi folds a blanket and places it in a wheelbarrow. The trio lifts Matthews again and puts her in the wheelbarrow. Her fragile body barely moves and her limbs dangle from the sides.

“The security guard told us we can’t take the wheelchair home. Ntombi is too weak to walk home,” says her sister. “This will have to do.”

Matthews (41) was a relatively healthy person, her family says. They became concerned a month ago when her left breast started to darken. Within three weeks, her breast had turned black and a lump as big as a golf ball had formed inside. 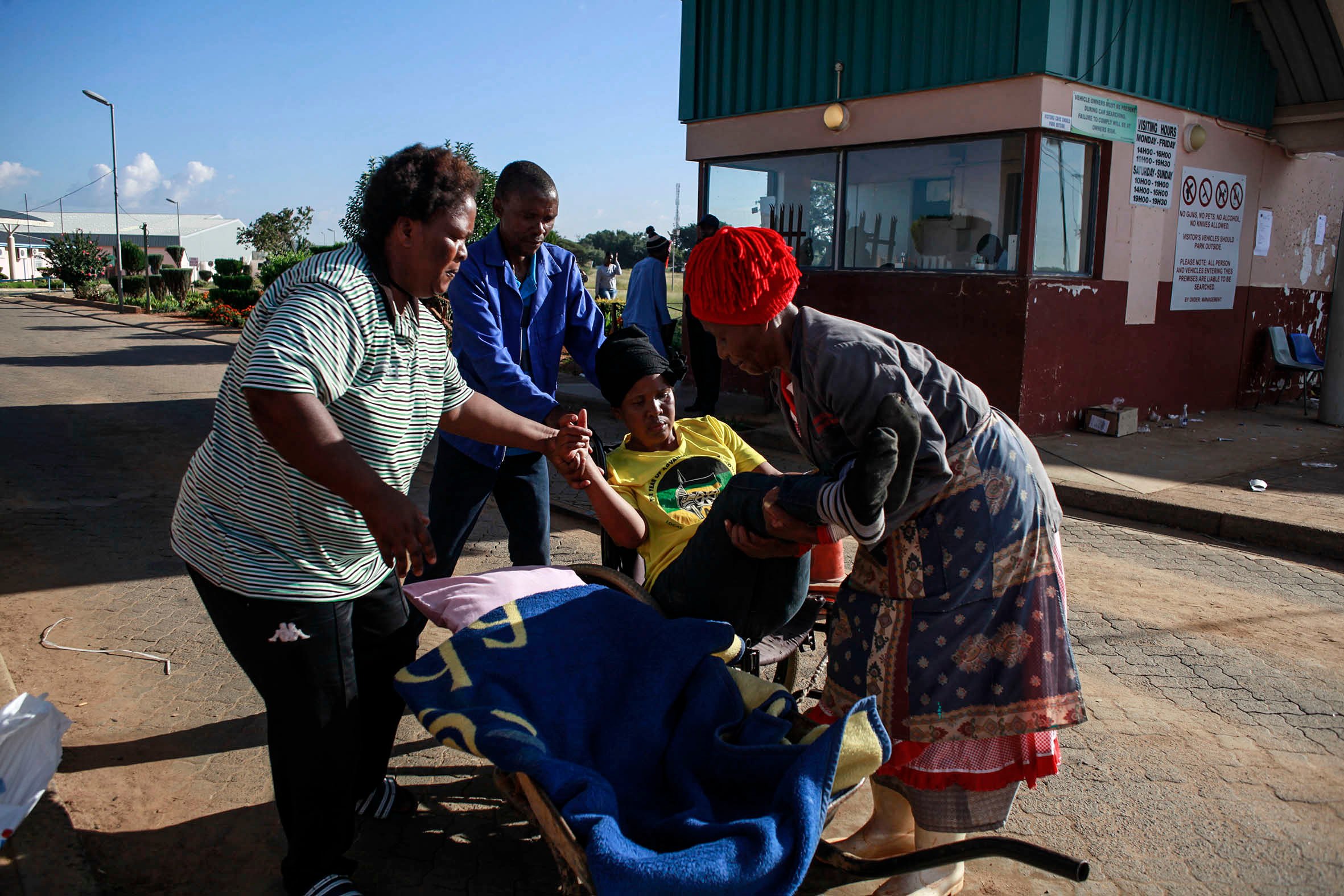 [Makeshift wheelchair: The family of Ntombizodwa Matthews (left) place her in a wheelbarrow after she spent a week in the Mahikeng Provincial Hospital without receiving medical assistance (Oupa Nkosi)]

“We thought she may have breast cancer. The hospital was the only place where we could find out exactly what was wrong,” says Nomvula.

Last Friday, her family called the hospital for an ambulance after Matthews had spent the previous day vomiting violently. This was her second hospital visit in two weeks.

“When she went the first time, they just put her on a drip and then discharged her the following day,” says her mother, Keitheng Matthews. “They didn’t give my child anything — not even Panado.”

Nomvula has been going to the hospital every day to feed and bathe her sister. “I don’t want to even imagine what would have happened if I didn’t do that,” she says.

On her last visit, she was told that the family must take her home because there was no staff to look after her. “Ntombi went to the hospital walking and talking, but today she cannot even feed or clean herself,” says her mother.

She was discharged with neither a diagnosis nor medication.

The protest action by members of the National Education, Health and Allied Workers’ Union (Nehawu) at the North West medicine supply depot has left hospitals and clinics in the province without a supply of drugs. Nurses and other staff members have also downed tools, leaving health facilities without anyone to attend to patients.

In January, some antibiotics were out of stock, an intern doctor told the Mail & Guardian. By the end of last week, nearly all the antibiotics had run out.

But the problems in Mahikeng go beyond this protest action, Shezi says.

“This hospital has been a disaster for a long time. Patients are ill treated — that’s if they get a chance to even be seen by a doctor or nurse.”

About 500m further on, Nomvula takes over pushing the wheelbarrow as Mphafa catches his breath. Shezi balances Matthews’s head with a pillow as her husband assumes the role of providing her shade from the bright mid-morning sun.

The trio walk in a synchronised motion, guiding their precious cargo and contemplating each step on the bumpy gravel road.

The squeaking wheelbarrow draws the attention of residents and passers-by in Lomanyaneng village, but this does not deter them.

About 40 minutes later, they approach the gate of the Matthews family home. Keitheng (77) can barely bring herself to look at her daughter.

“Jesus! Jesus! Jesus!” she cries. Mphafa and Nomvula carry Matthews into the house. A picture of a smiling Madiba overlooks the living room. In the bedroom next door, they gently place her on the bed. 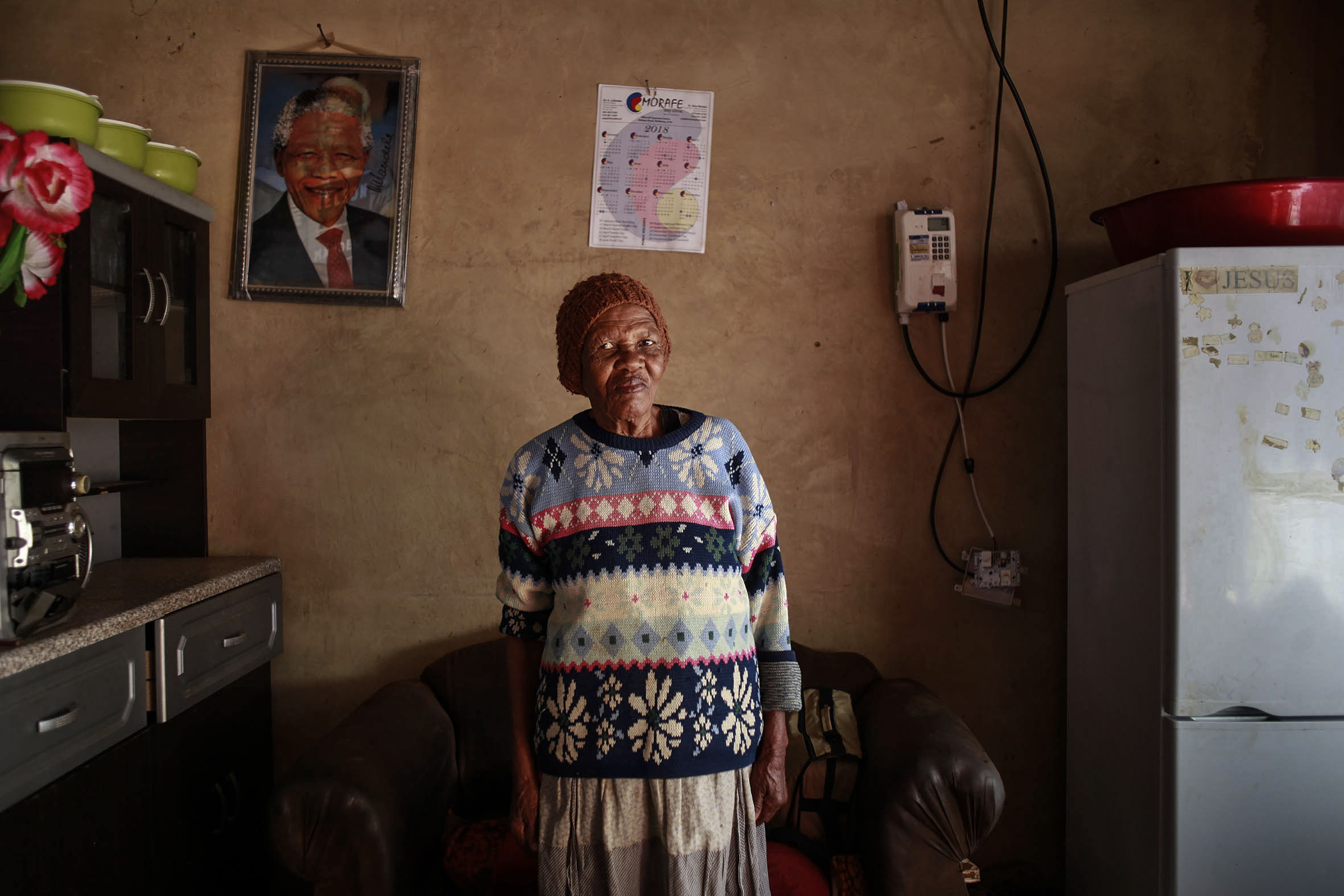 Nomvula brings a bowl of lesheleshele (soft porridge). She meticulously measures every spoonful before placing it in her sister’s mouth.

Nomvula feeds her sister another spoonful. She waits until she has swallowed the last one.

This is not the first time that the government has failed the locals, Keitheng says: “Mmuso o o phela o sotla ka rona ngwanaka [All this government does is break our hearts, my child].”

Lomanyaneng residents still get their water from JoJo tanks. The Matthews’s neighbour, Anna Modise, prepares for her daily walk to the water tank in their section.

“They [the local municipality] came to refill the tank three days ago, but sometimes they don’t come for up to two weeks,” she says.

When the tanks run dry, residents are forced to use prepaid water cards. Many cannot afford to load their cards, but the prepaid water taps are often without water anyway.

“If the JoJo tank is empty, we just do without water. I don’t have the money to buy water,” Modise says. “I don’t even have a wheelbarrow to go to another tank.”

Nomvula doesn’t know whether her sister will ever talk or walk again. Until she does, she will take care of her.

Shezi walks back to the hospital. She comforts all the patients who are waiting to be fetched by their families. “Our loved ones are going to die because of one man,” says Shezi. “How selfish and evil can a person be to let his own people die like this?”