The indefatigable taxi is a symbol of defiance

Remember the day we met? Mama’s car was being serviced and Papa was out of town so, after getting ready for school, Mama walked us to a corner where you and your cousins would wait to take us places.

I do not remember the day but know it was an early morning because there was very little sunlight. As my siblings and I, in our dry-cleaned blazers, approached you, you boasted a fresh wash that made your paint job glimmer like chrome.

Once I stepped into you, the aroma of hot breath and urgency sat in my nose alongside a passenger’s cheap cologne and the pine-flavoured scent of the Handy Andy or pine gel that the malume used to wipe your interior clean.

Once the door shut, separating us from Mama, and you started moving, my little head became anxious about how things would end, even though Mama had given the malume clear instructions on where we were going.

I was near to tears but quickly forgot about them once you started moving so fast you made my insides hula hoop and skip. You twisted your rear, swerved dangerously between lanes, ignored yellow lines, stop signs, yields and red lights — exciting things Mama and Papa never did. And it was okay because you got me to where I was going on time.

Although I was only seven when that happened and it would be years until I encountered you again, the way you went out of your way for me to get to my destination planted an impression that has since grown into our beautiful friendship.

My dearest Quantum — also referred to as Siyaya, Venture, Caravella, Iveco, inyathi, cab or taxi, depending on the model you present yourself through — today I would like to honour this friendship by acknowledging the rich past that birthed you.

Thanks to that past, when I say taxi, what I am referring to is nothing like the yellow American sedans, the ones that get hailed when commuters yell “taxaaaaay!” in the movies. No. Instead I speak about the vehicle that persuades me to catch a ride — with a “beeeeeeeeep! beep beep beep beeep!” — which I respond to with our language of pointing index fingers, nods or hand-waving gestures. 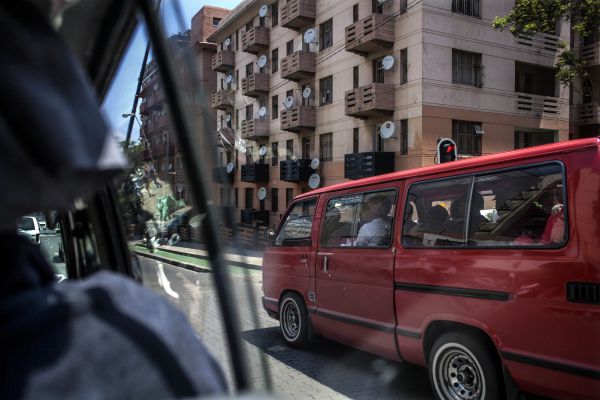 It all began in the year 1930 when the Motor Carrier Transportation Act of 1930 was passed. Following the Road Motor Commission in 1929, the government saw South Africa’s transportation system as being disorderly, unrestricted and uncontrolled. To solve this, the commission’s chairperson, JC le Roux, made the recommendation that all public transport be subjected to public sector ownership and regulation to eliminate competition.

Under the 1930 legislation, the carrying of goods or passengers with the goal of making a profit became illegal without a permit. The ownership and management of transportation facilities by black people was considered an offence, and black people were denied permits to operate the vehicles, denying them entrepreneurial opportunities in the transit industry.

With the swipe of a pen, black bus operators and owners became illegal. Emerging black bus and taxi owners were forced to surrender their businesses to emerging white entrepreneurs in the transport sector.

But your ancestors defied their circumstances and decided to operate illegally.

Because buses would attract the attention of officials, aboMalume noAuntie camouflaged their taxi services using sedans, like Uber and Taxify do today — except they managed to flourish without the auxiliary of app-armed smartphones.

The sedans they used were American cars such as Chryslers, Dodges and ones like Mkhulu’s Six Mabone. These were big, allowing drivers to transport up to six adults while blending in with the general traffic. So what looked like a large family travelling from point A to B was actually a group of commuting strangers and a driver.

By 1945, the state-owned companies that inherited buses operated and owned by black people merged to form the Public Utility Company, which we know as Putco today.

Because it was a monopoly, Putco increased fares as it pleased. Seeing that the majority of its users were the black middle and working class, the inflated prices were one of the factors that triggered the Alexandra and Evaton boycotts that took place in 1956. 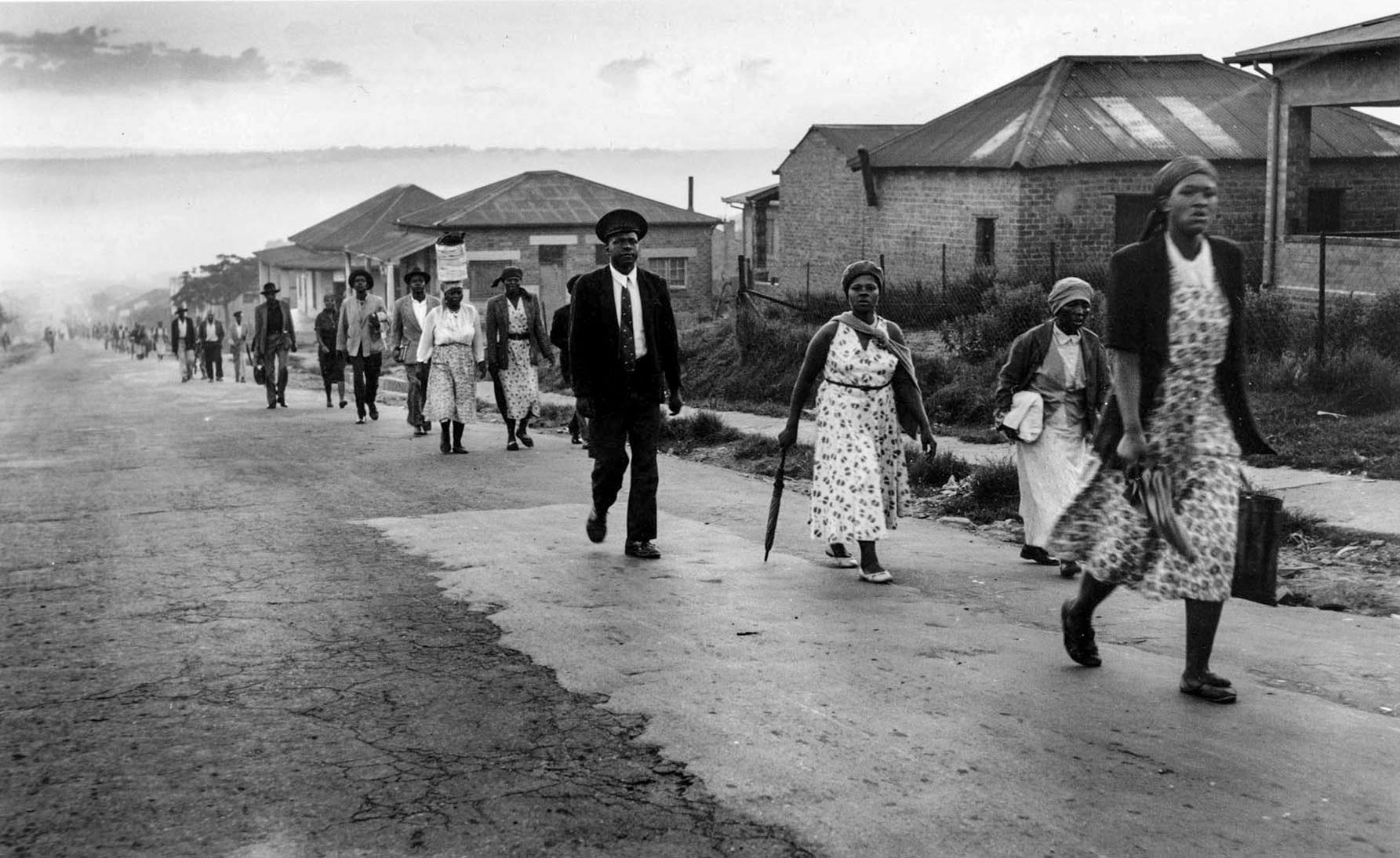 [Boycott: In 1956, the black working and middle class walked in protest against an increase in fares instituted by the Putco bus company (UWC Robben Island Mayibuye Archives)]

Government subsidies for public transport became too expensive because of the rapid growth in demand. Buses and trains began to operate only during peak times with inflexible routes. Their demise was the nutrition that filled the taxi industry’s belly because it allowed your family to respond to commuters’ demands.

Things got worse for the state in the 1960s when my ancestors were removed from commercial and industrial hubs of employment by forced removals. In areas such as Hammanskraal, north of Pretoria, where my mother was raised, black workers commuting to central Pretoria tripled by the 1970s.

Your family’s availability to transport the far-removed black working class using sedans is how it established itself as an important feature of the economy.

But the increased demand from consumers in townships and Bantustans, along with economic sanctions, resulted in a decreased availability of American sedans.

A plan for bigger and more accessible vehicles had to be made. It was in this period that your parents, the 10-seater Toyota Hi-Ace minibuses, were conceived and birthed.

This messed with the state’s profit so more legislation was put into place to cut off the taxi industry’s supply. The Van Breda Commission was established to reject the competition you presented to state-run transportation, with the excuse that competition could lead to an oversupply. This commission advised on the draft Road Transportation Bill to provide a system of control for unauthorised road transportation, essentially targeting your family.

The Road Transportation Act of 1977 defined a bus as a vehicle that carried more than nine people. So all drivers with vehicles that transported 10 commuters needed a permit.

The family did not hold their breath because clever people like aboMalume Jimmy Sojane and Pat Mbatha, who were prominent leaders in your family, overcame the hurdle by leaving one seat in the 10-seater Toyota Hi-Ace empty in order to operate legally.

Even when the demand was too much for state-run transportation, the authorities continued to make the process of acquiring permits hostile. Even when black operators had only nine passengers, they were subjected to fines and had to give up their vehicles if they were found without permits.

When this failed, your many homes were barricaded by traffic departments. So your operators no longer had the luxury of parking in designated areas to load and offload commuters.

Without a home base, the informal stop-and-go practice was born. Today, commuters flag you down, using a variety of hand signals. To get off, they holler “Mo robotong!” “Short left!” or “After hump!” to signal to the driver that they should stop.

With every load, the commuters’ destinations are different and thus minibus taxi operators made it impossible for traffic departments to memorise the taxis stops. Today we neglect the significance of this national practice.

But finding loopholes and operating within them — while officials continued to contest your growth through fines, taking you into custody and closing more ranks to leave you homeless — was no longer enough. It was not sustainable. So, with the blessing of your loyal users and local store owners, a go-slow and barricading of major points was organised in 1988.

Your family get-together, which we refer to as a taxi strike, was born. Law enforcement was brought in, drivers were arrested and soon after released with warnings.

For the first time since 1930, the government of the day decided to sit down with aboMalume noAuntie who operate you for civil negotiations. The outcome was the state agreeing that a limited number of permits would be granted and 16-seater taxis were legalised for public use.

How I wish my testimony to you ended without flaws. But news of black entrepreneurial opportunities made your family grow rapidly. The exponential growth brought about saturation, which created rivalry within the family, a rivalry that bred challenges with severe, irreversible consequences.

The rivalry was first catalysed by the government’s decision to issue a limited number of permits for black taxi operators so they could maintain some control over your family when 16-seater minibuses were legalised. Acquiring these limited permits from traffic departments was not pap en vleis and, because there were so many of you, many malumes and aunties who owned you decided to better their chances with bribery.

Then there was the matter of having too many taxis on the same route. To solve this, your family representatives had to negotiate and establish different routes for each owner’s fleet. Although this seemed fair, some routes had more commuters than others. So the more commuters a route had, the higher the intake, so the more sought-after the route was. The government was no longer the main obstacle. Instead, the cracks in the family dynamic began to show as each owner wanted what was best for them.

The family attempted to remedy this with the emergence of taxi associations — each of which represented (and continue to represent) the different owners’ interests and demands to other owners, government and law enforcement. This sparked the blood-shedding family feud between your owners, operators and various traffic departments, which you may know as the “taxi wars”, between 1977 and 2000.

The terms and conditions you were to be operated under resulted in the large, unrecorded number of deaths and injury of owners, drivers and commuters. The family members you lost are said to have been assassinated by rivals while commuters were unfortunate casualties. And, although I wish I only spoke of the past, such incidents continue today.

But it does not stop there. My dearest taxi, I cannot deny that my daily encounters with you trigger old and recent fears, fears of the perverted misogynist culture among the drivers who operate you, the not-so-queer-friendly ranks you call home, your disregard for road laws and the careless killings you are responsible for.

But knowing that you were forged as a defiant response by black entrepreneurs to apartheid policies has become the daily bread that nourishes me in the mornings, sustains me in the day and pacifies me in the night.

And when I forget, your melodious hooting expresses my ability to be heard in spaces where I was silenced. Your disregard for spaces reminds me to move freely. Your tireless trips to carry countless passengers to their destinations reminds me to extend a hand and never to measure my acts of botho/ubuntu as though there is a quota for good works.