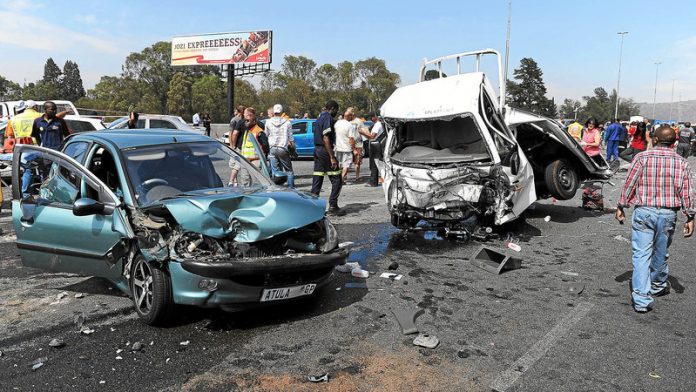 Although there was a two percent decrease in fatal crashes from 2016 to 2017, the number of annual fatalities because of car accidents is still exorbitant.

In its recently released ‘State of Road Safety’ report, the Road Traffic Management Corporation (RTMC) says there were 140 050 fatalities in 11 437 crashes in 2017, numbers that remain fairly consistent with 2016’s report.

According to national statistical service Stats South Africa, 12.5% of non-natural deaths in 2016 were attributed to transport accidents.

The report also noted that most crashes occur on the weekends, with 25% of all fatal crashes occurring on Saturdays. While 78% of crashes in 2016 were attributed to human factors, 2017 saw an increase of 13%. Human factors include but are not limited to drug and alcohol intoxication, speeding, distracted driving and jaywalking.

Simon Zwane, a spokesperson for the RTMC, states South Africans “must take more responsibility” while on the roads, “South Africans can assist by obeying the rules of the roads at all times, avoiding alcohol when using roads, driving within set speed limits, avoiding to cross the roads where is unsafe to do so, avoiding the use of cell phones while driving or walking and wear safety belts.”

A number of advocacy groups and associations denounced the statistics. Johan Jonck, an advocate at road safety advocacy group Arrive Alive notes South Africans “are simply not obeying the rules of the road and being compliant.”

Jonck stressed the importances of the “4 Es” — education, enforcement, engineering and evaluation — in preventing road fatalities.

“As ordinary South Africans and road users we need to obey the rules of the road — as drivers bikers, cyclists and pedestrians — and focus on much more defensive driving behaviour,” he said.

In a press release, the Automobile Association of South Africa asserted these statistics should be a wake-up call for drivers, pedestrians and law enforcement, “The situation on the country’s roads is worsening, despite numerous safety campaigns by government and non-governmental organisations … This is a shocking number which, without urgent intervention, genuine commitment from all role-players, and a complete change in the attitude of all road users, will never significantly decrease.”

Zwane believes law enforcement should take extra precautions on the roads, “Police should ensure visibility on the roads that experience high levels of non-compliance with road rules and ensure that all routes leading out of places of high alcohol consumption are closely monitored. They must also improve their operations within municipal boundaries or in built up areas to reduced pedestrian fatalities.

Jonck agrees that law enforcement must do a better job at enforcing road safety, “Effective enforcement start with the licensing process and the roadworthy certification of vehicles — it also requires that corruption is rooted out and that there is a “fear of consequences.”

State of Road Safety Report by Kiri Rupiah on Scribd