Obesity: Is eating slap tjips as bad as smoking?

The video features a small white box that looks like a cigarette packet. No pictures, just stark lettering.

People on the street are shown the box and asked a question: “What is the biggest preventable cause of cancer after smoking?”

They guess. Drinking? Sunbeds? No. The packet is opened. It is stuffed with greasy, plump slap chips.

On bleak white posters and billboards splashed across London and the United Kingdom and a barrage of social media messages the question is repeated.

Some letters to the answer are left out, in an easy game of hangman. OB_S__Y.

Yes, Cancer Research UK wants to tell the British public in a hard-hitting advertising campaign, being overweight or obese could be the new smoking: as smoking rates fall, obesity levels have crept up. If the trend continues, obesity may eventually overtake smoking as the biggest cause of cancer.

The country’s millennials — the supposedly quinoa-loving, juicing, detoxing generation born between the early 1980s and the mid-1990s — are likely to be the most overweight since records began, Cancer Research UK calculates, based on Health Survey for England data from 2015.

More than seven in 10 millennials will be overweight by 2026-2028, the organisation predicts. This compares with around half of all baby boomers — those born between 1945-55 — who were overweight or obese at the same age.

In South Africa, obesity figures are equally alarming. South African women have the highest overweight and obesity rate in sub-Saharan Africa, according to a 2014 study published in the medical journal The Lancet.

The country’s 2016 demographic and health national survey reveals that two out of every three women (68.5%) and just over a third of men 15 years and older are overweight or obese. The Lancet study’s results were similar: 69.3% for women and 39% for men.

South African women’s obesity and overweight rate is almost double the global rate of about 30%, according to The Lancet study, for which researchers collected data from 188 countries.

For adults, overweight and obesity ranges are determined using weight and height to calculate a person’s body mass index (BMI), which for most people correlates with the amount of body fat. Overweight is defined as a BMI of 25 to 29.9 and obesity as a BMI of 30 or more, according to the United States government’s Centers for Disease Control (CDC).

“While obesity groups tend to increase in the older age groups, South African millennials are also affected, with three out of five women and one in five men between the ages of 20 and 34 years estimated to be overweight or obese,” says Jessica Byrne, a registered dietician and spokesperson of the Association for Dietetics in South Africa (Adsa), referring to statistics in the 2016 demographic and health survey.

“South Africa faces a massive and growing burden of obesity.” 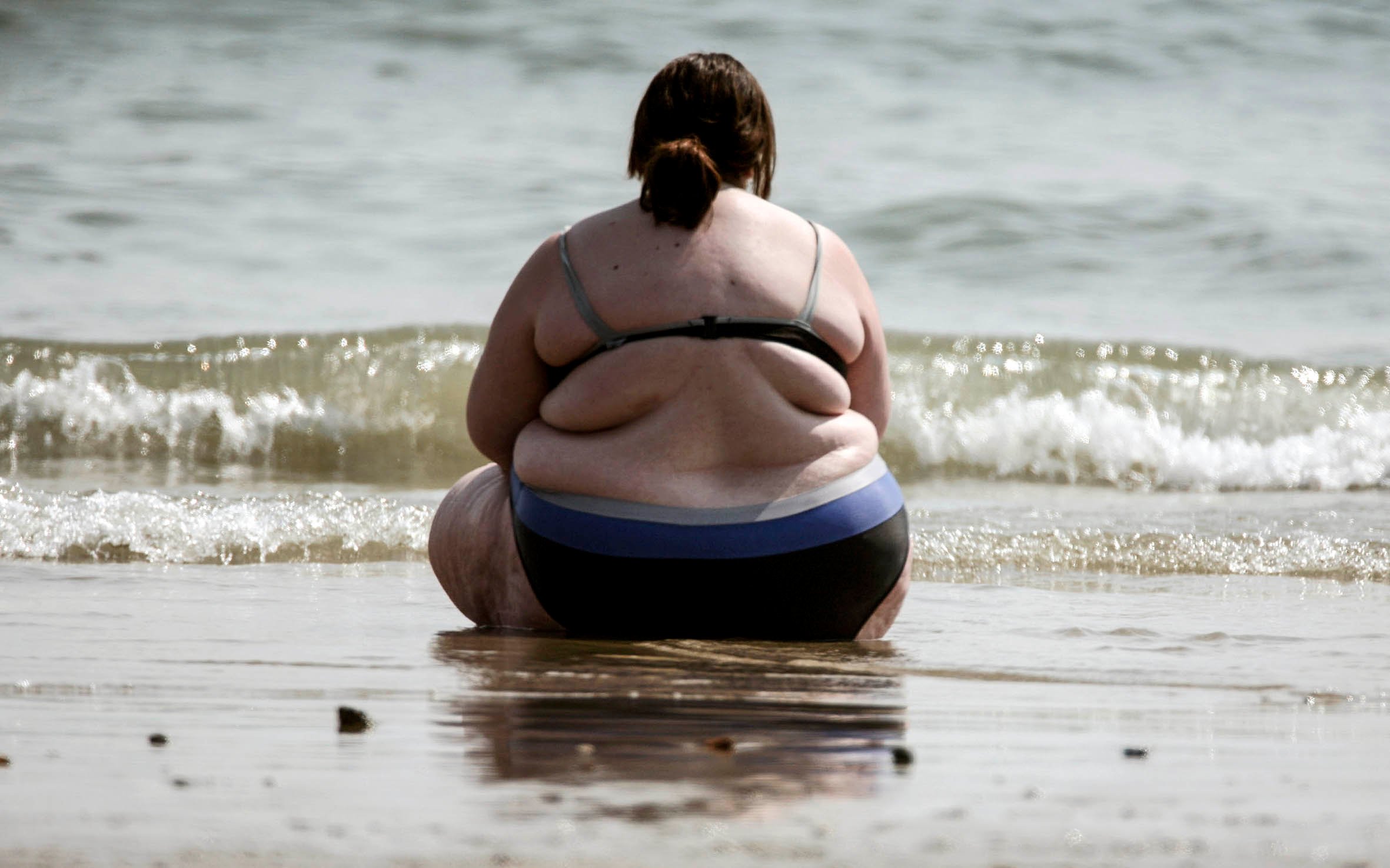 Lifestyle changes may prevent 4 in 10 cancers

Being overweight or obese is linked to 13 different types of cancer, research published in the New England Journal of Medicine in 2016 shows. This includes cancers of the breast in postmenopausal women, says Lorraine Govender, national advocacy co-ordinator of the Cancer Association of South Africa (Cansa), as well as cancer of the colon and rectum, endometrium, kidney and pancreas. It may also be associated with an increased risk of cancer of the liver, cervix, ovary and aggressive prostate cancer.

Statistics from the South African National Cancer Registry reveal a steady increase in the incidence of both lung and colorectal cancers from 2009 to 2013 among men, Govender points out.

The incidence is the rate at which new cases of a condition in a population increases over a specified period of time, according to the CDC.

“From 2011 the figures show that colorectal cancer incidence has increased in comparison to lung cancers,” Govender explains. “This could be the start of the impact of the obesity epidemic in South Africa.”

Among women in South Africa, Cancer Registry statistics show an increase in reported new cases of breast cancer and colorectal cancer. Govender says this is “possibly resulting” from the growing obesity epidemic.

Linda Bauld, Cancer Research UK’s prevention expert, explains that “extra fat doesn’t just sit there. It sends messages around the body that can cause damage to cells. This damage can build up over time and increase the risk of cancer in the same way that damage from smoking causes cancer.”

But only 15% of people in the UK know that obesity is a cause of cancer, Cancer Research estimates.

A 2015 study in the British Journal of Cancer confirms smoking is still responsible for a huge 54 300 cases of cancer in the UK every year but being overweight or obese causes nearly half as many (22 800 cases or 6.3%). The results suggest that more than 1 in 20 cancer cases would be prevented by maintaining a healthy weight, Cancer Research UK argues.

In South Africa, Govender explains, there is not sufficient research to show the actual percentage of cancers that are lifestyle-related. But, apart from obesity, preventable cancers include those linked to tobacco, alcohol consumption, exposure to the sun and ultraviolet-emitting tanning devices, pollution and lack of physical activity.

“Cancer is not inevitable,” says Govender. “It is possible that many cancers related to overweight and obesity could be prevented.” 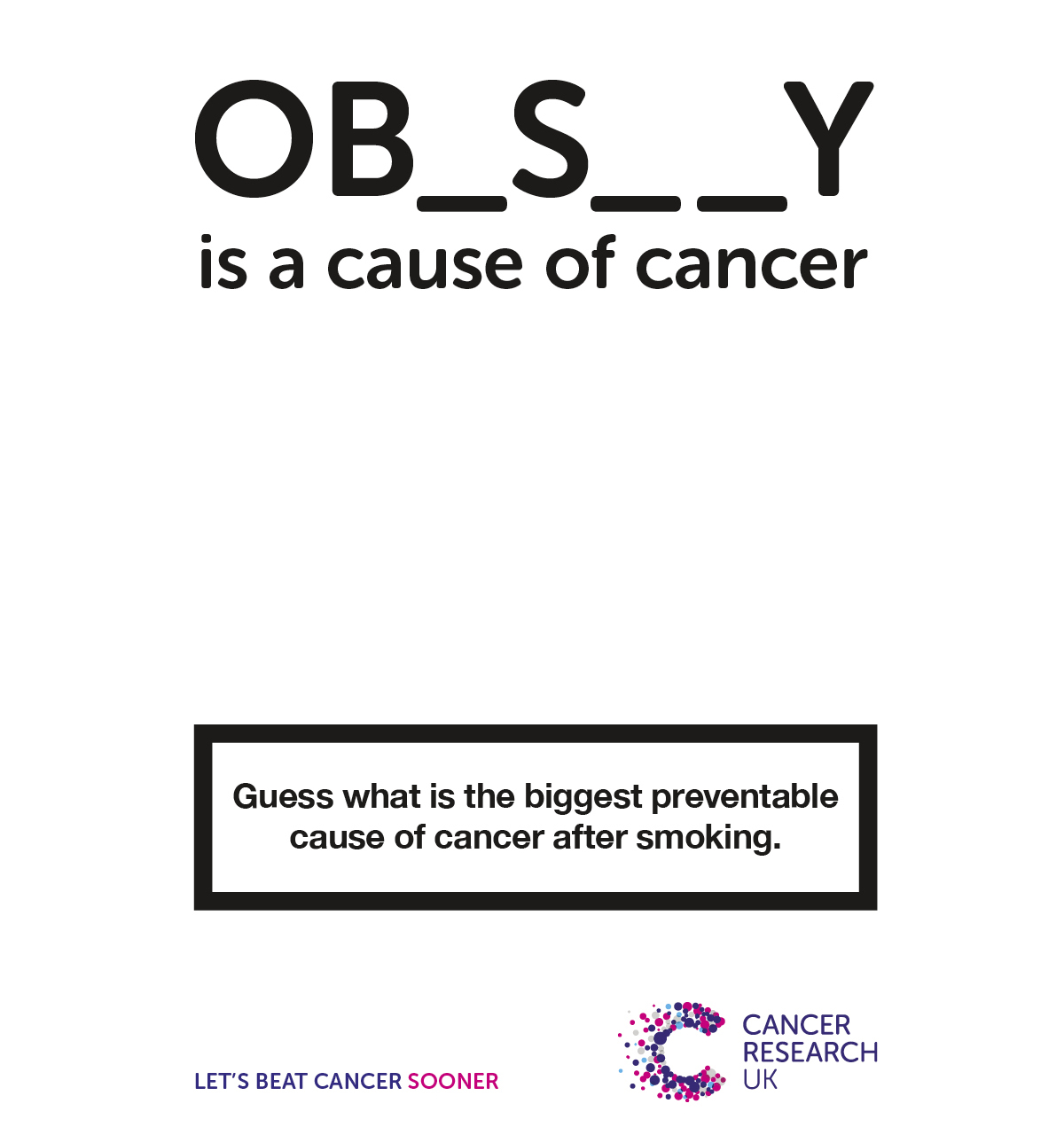 Will blunt messaging convince millennials to shake off the kilos or is it fat shaming?

Sofie Hagan, a London-based Danish comedian, did not tactfully omit a single letter when she took to Twitter to vent how P_SS_D off she was: “Right, is anyone currently working on getting this piece of shit Cancer Research UK advert removed from everywhere? Is there something I can sign? How the fucking fuck is this okay?”

But Cancer Research says the campaign was never about fat shaming or blaming someone for their cancer.

“It’s not about anybody’s personal eating habits or blaming the individual,” says Malcolm Clark, policy manager for obesity at Cancer Research UK. “Yes, we wanted to raise the fact that there is a link between obesity and cancer, but the aim was to get action across the population to tackle this; to get policymakers and regulators to do more and to show where government should focus its efforts. The purpose was to have a public health campaign.”

The campaign was based on science, Clark emphasises. And although these figures make for grim analysis, they also show that positive changes can decrease the risk of cancer.

In South Africa, Govender says, nongovernmental organisations such as Cansa play a vital role in creating awareness — especially in the absence of a functional and well-resourced national cancer control plan.

But Cansa’s language is considerably more measured. Obesity is a highly stigmatised condition, Govender points out, and even clinicians may use alienating language when they try to talk to patients about their weight.

Adsa’s Jessica Byrne says that, although shock tactics may raise awareness, as has been successfully done in highlighting the dangers of smoking, there is a delicate balance between educating the public about the dangers of obesity and stigmatising or creating a negative body image in those who are overweight.

“Perhaps supportive messages should also focus on the importance of healthy lifestyle choices to prevent cancer, rather than singling out obesity,” she explains.

Cancer Research UK is still awaiting the results of the impact its campaign has had.

There will be considerably more than 15% of people who know about the link between excess weight and cancer, Clark predicts, especially given the level of response, coverage — and outrage.