NFL to fine players for ‘taking a knee’ 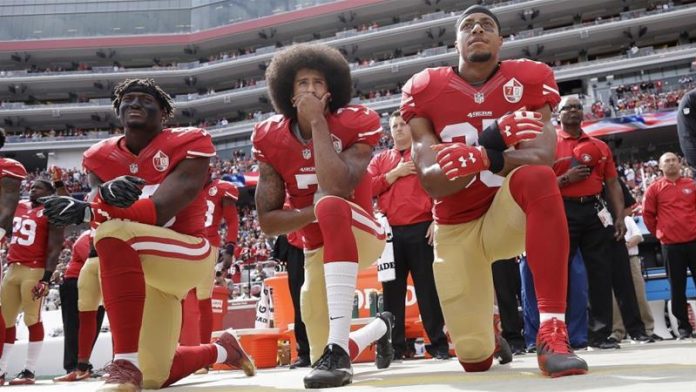 On Wednesday, the National Football League (NFL) announced that all of its employees, including team players, must stand for the duration of the national anthem.

In the statement, NFL commissioner Roger Goodell spoke on behalf of all 32 organisations, detailing six guidelines that are expected of team staff and players in order to “show respect for the flag and the anthem”.

“It was unfortunate that on-field protests created a false perception among many that thousands of NFL players were unpatriotic. This is not and was never the case,” Goodell said.

“We believe today’s decision will keep our focus on the game and the extraordinary athletes who play it — and on our fans who enjoy it.”

The new rules and guidelines detail steps to avoid controversy on the field. The league announced that it would allow players who do not want to participate in the singing of the national anthem to stay in locker rooms or off field. The NFL also announced that teams will be fined if their players do not stand and that there will “appropriate discipline” for individuals who refuse to “stand show respect for the flag and the anthem”.

The new policy was set in place after players knelt during games at the singing of the anthem last season. At every NFL game, the American national anthem is played and all team staff and game attendees are expected to stand. In 2016 players started kneeling during the anthem to protest racial inequality and police brutality against black people in the United States.

The movement was sparked by former San Francisco 49ers quarterback Colin Kaepernick during a 2016 preseason game, according to Sports Illustrated. For two games, the Super Bowl quarterback sat throughout the entirety of the national anthem. Although Kaepernick went unnoticed for a few games, his action gained national attention as the preseason continued. On September 1 2016 Eric Reid joined Kaepernick and instead of sitting they both knelt, according to SB Nation.

In an interview after a 2016 preseason game, Kaepernick explained his refusal to stand during the anthem, “I am not going to stand up to show pride in a flag for a country that oppresses black people and people of colour.”

READ MORE: Why US sports stars are taking a knee against Trump

Soon other players joined him in a nationwide movement, creating a mix of positive and negative reactions from fans, politicians and celebrities including Ellen DeGeneres, Samuel L. Jackson and JK Rowling. Even president Trump commented on the demonstration, writing on Twitter in September 2017, “If a player wants the privilege of making millions of dollars in the NFL, or other leagues, he or she should not be allowed to disrespect our Great American Flag (or Country) and should stand for the National Anthem. If not, YOU’RE FIRED. Find something else to do!”

As a football fan, I am proud of the NFL players today. Nothing is more American than the right to peacefully protest.

In response to Trump’s condemnation, some players and team members across the league knelt and linked arms while others decided to not participate during the anthem. Some teams had the majority of its members not present on the field during the anthem.

In October 2017, Goodell commented on the controversy surrounding the actions of NFL staff and players.

“Like many of our fans, we believe that everyone should stand for the national anthem. It is an important moment in our game. We want to honour our flag and our country, and our fans expect that of us. We also care deeply about our players and respect their opinions and concerns about critical social issues,” he said.

“The controversy over the anthem is a barrier to having honest conversations and making real progress on the underlying issues. We need to move past this controversy, and we want to do that together with our players.”

The new guidelines will take effect when the preseason commences in August.