Fleece the state, face the music

Parliament is seeking to criminally charge officials who have for years ripped off the state to the tune of billions of rands, a situation that has worsened in recent years.

Themba Godi, the chairperson of Parliament’s standing committee on public accounts (Scopa), this week again called for a stricter eye to be kept on public expenditure.

This included any deviations from standard bidding processes and expansions of existing contracts without valid reasons, practices that Godi said were becoming the norm rather than the exception.

“It is to fight corruption, because when you have officials not wanting a competitive bid but wanting one company to stay in the department forever, it only means there is something in it for them,” he said.

“Because there is no competitive bid, one is never sure whether the services for which government is being charged are competitive or just a thumbsuck. We’ve seen at Transnet [how] a contract for Bidvest [Protea] Coin security was extended 13 times, and you can’t say they possess any exceptional skill for there not to be a proper process … This also has an effect of frustrating transformation,” Godi said.

This week, Scopa analysed information about serious offenders. They include the department of defence and the State Information Technology Agency (Sita), whose deviated expenditure tipped the scales at an estimated R734‑million and R288‑million respectively in the last two quarters of the 2016-2017 financial year.

A draft treasury document detailing guidelines for managing deviations, contract variations and expansions presented to Scopa earlier this year also noted that “deviations appeared to be the norm rather than the exception”.

This, the document said, demonstrated the poor level of planning by departments and public entities.

This abuse and lack of planning has already led the treasury to tighten its regulations on deviations, noting that these may only occur in an emergency and if only one supplier for a particular product or service exists. 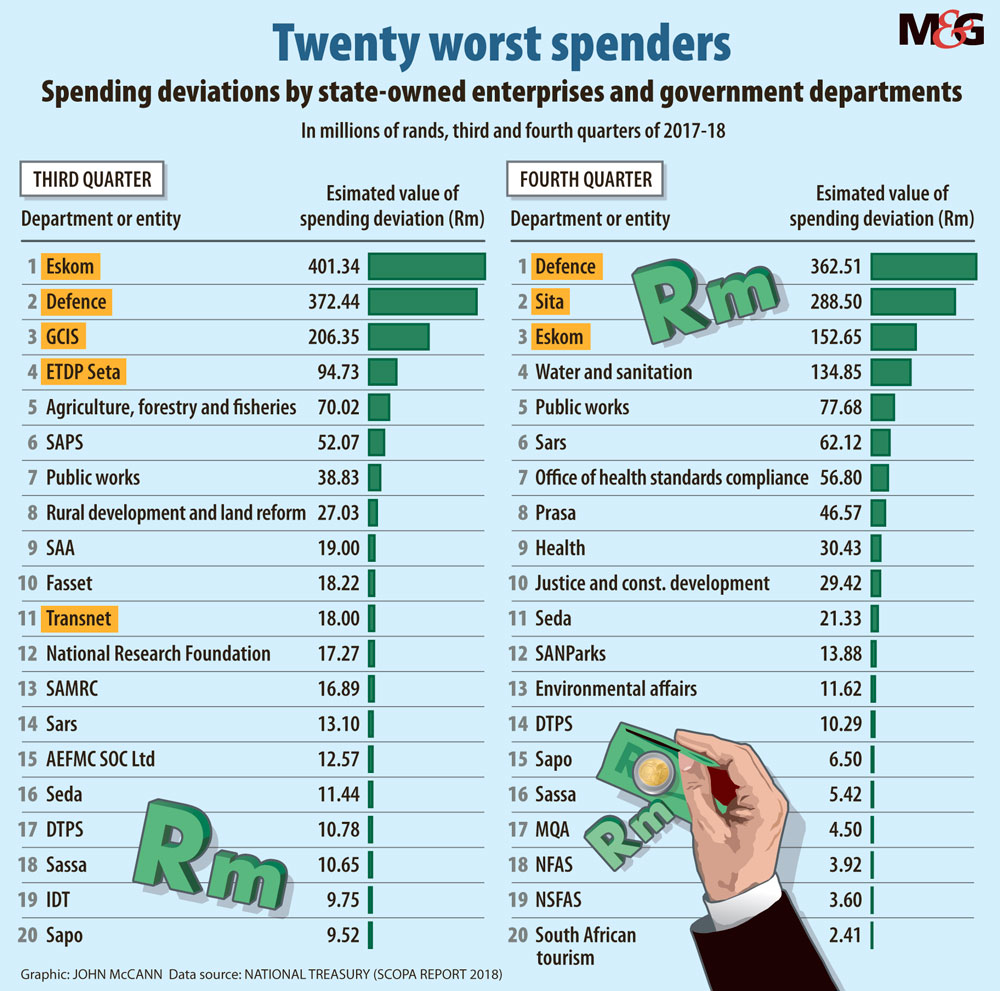 According to information put before Parliament last month by treasury’s office of the chief procurement officer, the total value of the top 20 deviations in the last quarter of 2017-2018 alone was R1.5‑billion. This was an increase of about R170‑million from the previous quarter.

“The potential risk in this practice is that certain service providers and suppliers get preferential treatment in the allocation of government contracts, potential abuse in the SCM [supply chain management] system, corruption, exclusion of broader participation of suppliers, anti-competitive practices [and] promotion of monopolies,” said the treasury note.

“Despite numerous instruction notes that treasury has issued to regulate the management of procurement through deviations, there has been an increase in such requests. Some government institutions have found a mechanism to disregard the provisions of the law by resorting to procurement through the deviations,” said the note.

This practice is also believed to have been central to the alleged capture of state-owned enterprises by the likes of the Gupta family and companies close to them, in order to siphon off billions of rands.

The most infamous example of such deviations is the controversial R1.6‑billion payment made by Eskom to international consultancy McKinsey and Gupta-linked firm Trillian for work that was approved without following proper processes.

At the time, Eskom relied on a claim that McKinsey was the only company that could help it to save money by optimising its operations. Similar contracts were signed and payments made to Trillian by other parastatals, including South African Express and Transnet.

In the financial year that ended in March 2018, Eskom alone had registered 84 applications for deviations. The department of environmental affairs; the sector education and training authority dealing with education, training and development practices; and the government communication and information system made 40, 70 and 30 deviation applications respectively.

Sita has also been under the spotlight for the procurement deviations and expansions it has sought from the treasury. Appearing before Scopa this year, it emerged, that in the 2017-2018 financial year, a quarter of Sita’s bids led to deviations from procurement guidelines.

Scopa has raised concerns that there are no consequences when departments, entities and municipalities engage in corruption by using deviations and expansions. It wants the government to start pressing charges against officials who try to find ways to cheat the system.

The treasury told Scopa last month that some of the challenges it faces include the lack of reporting for deviations under the threshold of 15%, the use of deviations to enter into long-term contracts, and the process of conducting sham tenders to eliminate competition.

The treasury’s chief director for supply chain management, Solly Tshitangano, told Scopa that departments do not fully report on the amounts for which they procure, or they manipulate the procurement process. This includes asking for quotations from suppliers at different times so that some suppliers do not meet the deadline for submission.

In response, the treasury has established a task team to review current procedures and processes for managing deviations and contract expansions to prevent potential abuse.

The review process is expected to be finalised during the second quarter of this financial year.