‘I was kicked out of our house by his parents’, say widows

Marie Noélla Sambelle was with her husband Gilbert Yalivenda for more than two decades. They had six children and saved for years to build a home of their own. But in 2014 Yalivenda was shot dead by Seleka rebels. His family seized the couple’s house and other possessions.

“After my husband was killed, I was kicked out of our house by his parents,” says Sambelle. “The parents of my husband said ‘all this property, it is not for you. It belongs to the members of our family’.”

In Central African Republic (CAR), when a man dies, his widow is sometimes evicted from their home and land by her husband’s relatives – a practice that is illegal in most cases. The toll that this dispossession takes on a woman and her children is amplified by a brutal conflict, a lack of social safety nets and diminishing family ties.

Thousands have been killed in CAR since 2013, when the Seleka – a predominantly Muslim coalition of rebels – overthrew the government of François Bozizé. The anti-Balaka, a mostly Christian militia that opposes the Seleka, has also committed grave atrocities. Attacks on civilians began to increase again in 2017 and now up to 80% of the country is under the control of armed groups.

The underlying motivation for evicting widows is greed, says Rosalie Nguitimale, president of the Kémo prefecture branch of the Organisation of Central African Women (OFCA).

“The purpose is just to take all the property,” she says. The husband’s family usually confiscate items such as motorcycles, farming implements, beds, clothes, TVs, savings, and anything else that catches their eye.

Sambelle has struggled to accept the theft. “When my husband was alive we farmed together, we sold the crops, and then we shared our fortune with his parents and other relatives. The money that we earned is what allowed us to build the house,” she says. “I was so disappointed when my relatives-in-law took it from us.”

In the parts of CAR not controlled by armed groups, weak state institutions mean these women do not receive any support. With nowhere else to turn, many try to move back in with their parents or another relative, says Emma Ouayagalé Yeo, a technical coordinator at the Norwegian Refugee Council (NRC), which runs a programme to assist widows in Sibut, 181km north-east of the capital Bangui. But with more than 1.2 million people displaced by the conflict, Ouayagalé says the women often find the family home destroyed or occupied by others, or their families are unable to support them because they too are affected by the conflict.

Factors including illiteracy, a dysfunctional judicial system, and a lack of awareness of their rights mean widows don’t press for fair legal settlements. According to CAR’s family code, property acquired during a marriage belongs to both spouses (with some exceptions) and a widow is entitled to half the estate and is allowed to continue living in the home for at least two years.

In Sibut, the OFCA and NRC try to mediate. “When such cases occur, we try to gather people together in order to convince them not to kick the widow out by force. People don’t want to listen to us, but they usually calm down after these interventions and we have been successful at preventing recent evictions,” says Nguitimale.

Evictions sometimes involve a drawn-out campaign of verbal and emotional abuse that eventually forces the woman to leave. Children are not safeguarded, says Ouayagalé. 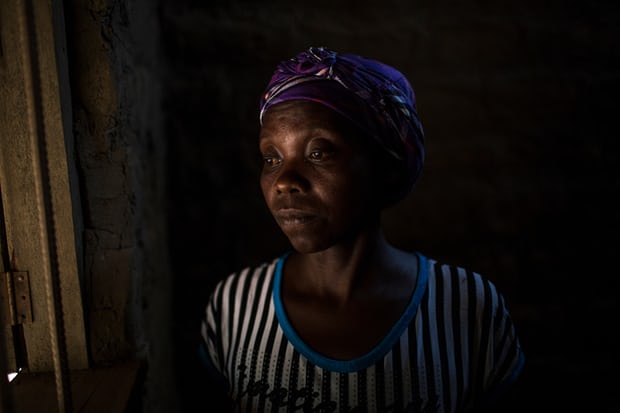 Charlotte Mbetilissio, 35, poses for a portrait at her father’s house in Sibut, where she now lives. In 2014, three months after her husband was killed by Seleka rebels, his family forced her to leave her home, along with their three children. (Will Baxter, The Guardian)

Three months after Charlotte Mbetilissio’s husband, Daniel Gazaworo, was killed in 2014, she was kicked out of her home by his family along with her three children, now aged 18, five and four.

“When Gilbert was alive, he gave food to the extended family. But when he died … I could no longer give anything to them,” says Mbetilissio. “They said ‘you have to move, leave this home, you constitute a burden upon us’. Even the children I had made with their son were pushed away when they wanted to eat with their grandparents.”

Mbetilissio’s youngest son, Félicien, needs blood transfusions. “When I take him to the hospital, I am supposed to pay for the blood unit. But because it is too expensive, sometimes I cannot pay,” she says.

Mbetilissio says the cost of the transfusion can come to 10 000 CFA (R234) – a small fortune to someone with almost no disposable income.

“I was only able to pay the full amount once. Two other times one of my relatives donated blood for my son,” says Mbetilissio, admitting she has stopped taking her son for treatment. “Because of the cost of the blood, I have just started using a traditional medicine instead. It’s a mixture of avocado and papaya leaves, which are boiled and mixed with sugar.”

Pélagie Sana has been struggling with school fees since her husband Kevin Daouda was shot dead by an armed group in 2014.

“If there is no money, the children are kicked out of the school,” she said. “I worry about this constantly. It makes me really depressed.”

This feature was originally published as part of The Guardian’s Global Development project.