Pretoria Station, or Bosman as the locals prefer to call it, is my plek. When I arrive there from the Gautrain at 3pm, she is her usual afternoon self. This changing spot for commuters was built in 1910 when the Transvaal Colony government was collapsing. Instead of handing excess funds over to the new government, they spent it on what stands today as the first colonial site that I will encounter on my trip.

Commuters spill out of the Metrorail and Gautrain stations to make their way to their destinations on foot, via taxi or using long distance buses like I will be to get to Grahamstown for the National Arts Festival. 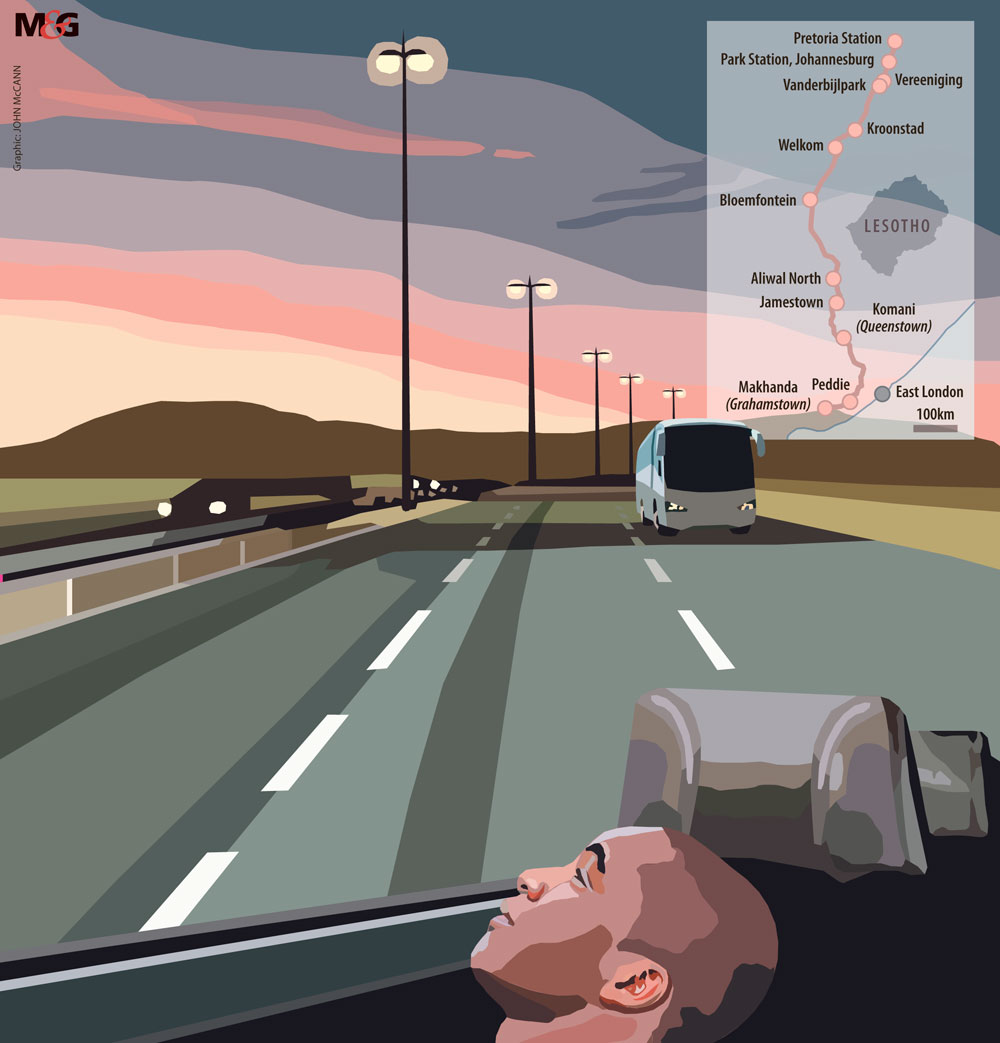 As I make my way to the bus station offices to check in my luggage, the heavy buzzing sound similar to that of an unserviced tractor, escapes from the idle buses’ engines. At this time of the day the guardians who populate the station while she sleeps in the late hours of the night, with their worn out Home Choice blankets and trailers that carry plastic bags and heaps of folded cardboards, are up and about interacting with commuters. All they ask in return for guarding her is loose change, half eaten McDonalds specials and the last puff from smokers’ cigarettes.

While I await the chariot with mirrors that protrude from its head like bug eyes, I watch other long distance commuters board Translux, Citiliner, City to City and Greyhound buses. I also see others using unfamiliar busing services such as APM, Eagle Liner, Eldo Coaches or Mzansi, all marked with distinct colours to distinguish them from their competition.

I sit on a bench adjacent to a large ‘no hawkers’ sign that a large number of the Bosman population chooses to defy. The defiant merchants have studied the target market because they have many of the bus essentials — fleece blankets for the early morning cold, snacks, airtime and water — all selling for cheap cheap. The sound of rolling luggage against the brick pavement signals the arrival of the bus that will be my home for the next fifteen hours.

When I reach the upper level of the double decker Marcopolo bus I savour the smell of clean carpet because I know it will soon be replaced by that of meat pies, KFC Streetwise meals and damp feet. I find my seat and settle into the sound of crushing foil from chip packets being opened, cameras clicking for departure selfies and the idle bus mimicking the sound of a distant vacuum cleaner. Before long the bus moves and we drive past New Lock, the gallows and the Voortrekker Monument. While the sequence of these sites moves my stomach, the wheels on the bus continue to go round in a way that shrinks the perspective of these monuments.

We drive past the mushrooming townhouses, office parks, malls, billboards and factory outlets that characterise the highway between Pretoria and Johannesburg’s central business districts.

In Joburg’s CBD, my fellow passengers and I look down at pedestrians with a godlike glare because of how high up we are from the pavement until we reach the metal and concrete beams that form Park Station’s bus depot. When the gold that ensured the city’s rise was discovered in Gauteng, Johann and Johannes were common names among the Dutch settlers. Some say the city’s name, Johannesburg, was sourced from settlers Christian Johannes Joubert and Johann Rissik who were involved in surveying the area.

I meet my seat mate for the journey at Park. The flu-ridden man eases the uncertainty I have about whether or not he is equipped with bus etiquette by napping quietly next to me once he is settled. To support my neck, which will have to stay upright while holding up the high bun of thick braids on my head, I fold the blanket I packed as hand luggage into a makeshift pillow and recline my seat.

Soon the humming engine quiets the restless excitement in the bus down. One by one we fall asleep only to wake up when the bus goes so fast it feels like the wind is swinging it violently from left to right.

The next ten hours

The heavy fog of industrialised commercial cities is exchanged for a slower pace at the toll gates that welcome us to Vaal. The sun has long set so all I see when I look out the window is my reflection. After driving for quite a distance we stop at a Shell garage that connects to a Steers outlet in Vereeniging. The name is derived from the Dutch word association or union and refers to the South African and Orange Free State Coal and Mineral Association which was a thing in the 1800s when the town was established as a mining hub.

Here, some passengers stay in the bus while others leave to buy groceries. I overcome my fear of being left by the bus by hopping out in order to apply pressure to my feet, which have swelled up from a lack of movement for what feels like an entire night. It is only just after nine pm. I take deep breaths of the fresh air to prepare my nose for the smell that will permeate from brown Steers paper bags once the bus starts moving again.

Since it is pitch black outside, I barely make out the silhouettes of distant suburbs or the curves of mountains that we drive past as I fall in and out of naps. We continue to drive through small towns that signify Afrikaner legacy — Vanderbijlpark, Kroonstad, Welkom and Bloemfontein.

The black shadow silhouettes outside begin to show their colours and depth around six am. Unaware of where I am exactly, I turn on my GPS location to see that we are nearing Peddie (Ngqushwa) after just having passed Aliwal North, Queenstown, Jamestown. We are close. Siiiiiiiigh, even more colonial territory marking.

Aliwal North is a tribute to the 1800s Governor of the Cape Colony, Sir Harry Smith. Smith named the town in memory of winning the Battle of Aliwal in Punjab, India in 1846. Queenstown, which I prefer to refer to with its rightful name Komani, was named by Sir George Cathcart in honour of his Queen Victoria. The wheels on the bus still go round.

Peddie is the last stop before I reach my destination. I am so high from the tarred road, I see the hills that surround me dip into one another and a handful of rondavels and matchbox sized homes appear in the painting like a scene every now and then. At some points, the narrow road beneath us disappears so we float slightly above the lush forestry of the Eastern Cape. By seven the sky is a baby blue and pink wallpaper suitable for a nursery. The foreground is a green, grey and blue entourage of mountains — some within arms reach, others teasing from too many kilometres away. Men and women dressed in Orange reflective work gear busy themselves below with roadworks when I wonder if the drivers budget cruising time in scenic areas so passengers can take it in.

I fold my blanket, force my swollen feet into my narrow sneakers and run a wet wipe against my sleepy face before hopping off in Rhini for my twelve day stay.