At Rhodes University, there were many of us who experienced rape, sexual assault and sexual harassment. I grew up quickly as these words started to lose their distance. First, it happened to women in my residence and in my tutorial groups, then it was my friends. Eventually, it was me too.

Rhodes, in Makhanda (formerly Grahamstown), has a very small campus. It can be a dream: everything you could possibly need as a student is within walking distance. In first year, drunk on your newfound independence, you feel like campus is your oyster. But when you get violated by a fellow student, Rhodes becomes suffocating.

It might happen sporadically. You spot your perpetrator on your way to media studies. The encounter leaves you sweating, so you take a different route to class the following day. It might be that you keep seeing him at the gym and decide to stop going altogether. Even if you know when you will see your perpetrator — when they are in your dining hall or your tutorial group — you can’t prepare for it. It is not something you can get used to.

In 2015, while working on an assignment, I trawled through Rhodes’s records of disciplinary hearing cases. I charted reported instances of sexual violence over the previous four years, focusing on those that had been finalised. Of these, there had been varying outcomes: some had been withdrawn; others were referred to mediation by the complainant. In one instance, the prosecutors had declined to prosecute. In another case, the accused had been acquitted. Between 2011 and 2014, only one person had been found guilty of sexual assault. This finding was corroborated in 2016 by a Mail & Guardian report headlined “‘Campus rape plans favour perpetrators’”.

In the years preceding the 2016 protests, there was almost no news about sexual violence from the university, except for the annual silent protest against sexual violence. This didn’t mean there was no news at all. A friend would warn you about the guy from the cricket club (he made a habit of taking home drunk women). Or you would hear that a subwarden from down the hill didn’t know how to take no for an answer. You knew to be cautious around so-and-so, especially when they were drunk. We knew. Through the grapevine, students were trying to protect each other.

The #RUReferenceList was a protest against rape culture in 2016 that began when a “reference list” of names was anonymously published on a Rhodes student Facebook group. The names were those of male students. People tagged their friends in the comments section and said little else. The allegation which surfaced was that the names had something to do with sexual violence. Eventually, a student body meeting was called.

Within hours, hundreds of students were protesting, angry about rape culture at Rhodes. They confronted the men named on the list, removing them from their residences and calling for them to be arrested.

Weeks before the reference list appeared, the Unashamed movement at Stellenbosch University invited students from other universities to help to create a campaign against gender-based violence. The Chapter 2.12 campaign — named after the section of the Constitution that guarantees one’s right to safety — would express that the rape culture on our campuses was unconstitutional.

The initial plan set out by the founders of Unashamed was to start with a poster campaign, and then to make a documentary. Later on, there would be marches at which students would present a list of demands to their respective university administrations. 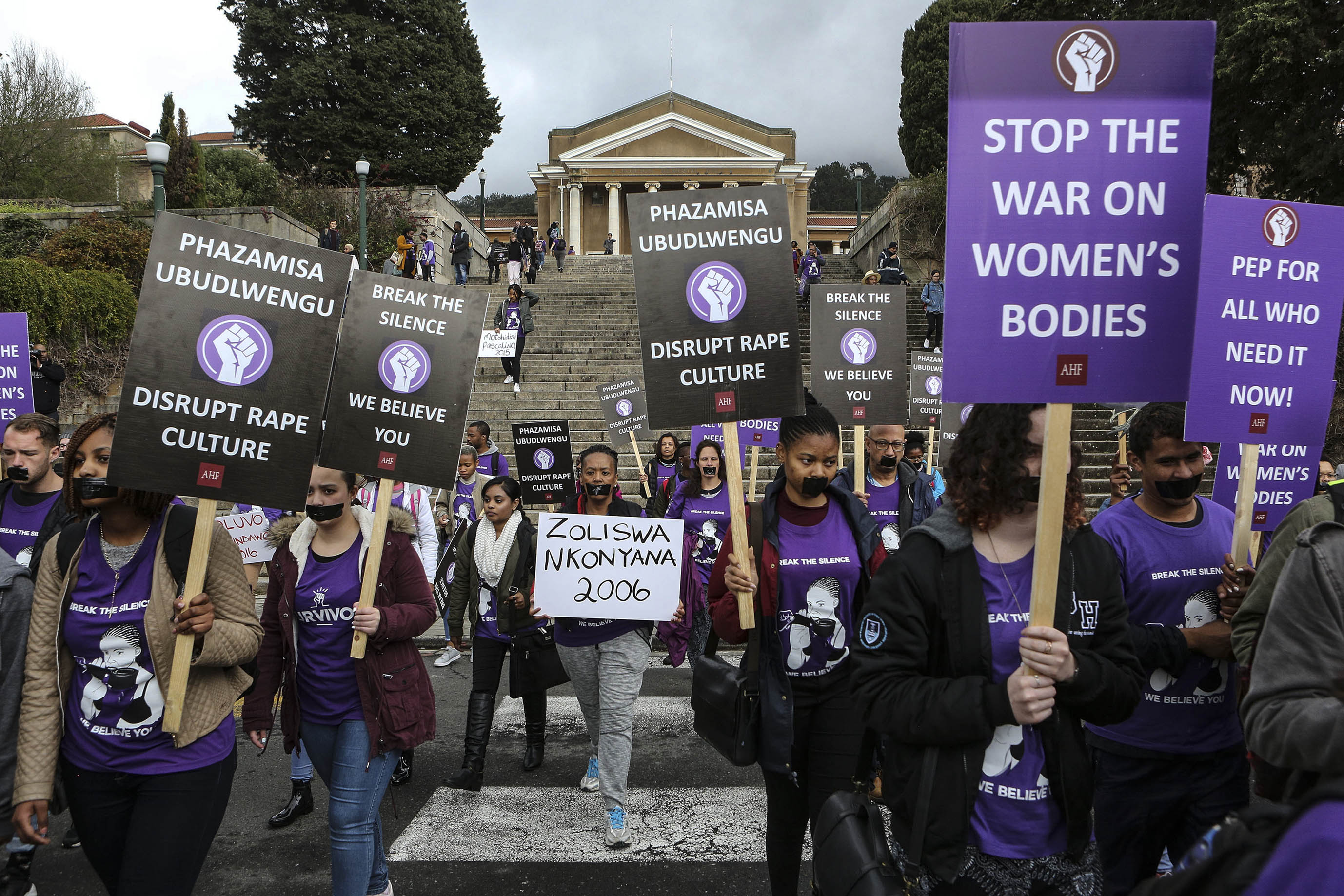 A few weeks after Unashamed Stellenbosch sent out their invitation, a small group of Rhodes students met in the Steve Biko building for a #Chapter212 planning meeting. Some of us knew each other from working together during #FeesMustFall or from advocacy societies. Others joined after seeing an invitation on a student safety WhatsApp group, which stated refreshments would be served.

Once we’d had some pizza and were more comfortable, we started sharing our personal experiences of sexual violence at the hands of fellow students. We spoke about the barriers we’d encountered in seeking justice: the lack of information when we wanted to lay complaints, being turned away because the harassment officer was absent, not being believed, and having our cases dismissed by the university proctors. Some of us had met the dean of students to highlight these problems but months later there had been little progress.

At the end of our meeting, we typed out poster wording in a PowerPoint document: “Rhodes hires rapists and abusers. Only one person is assigned to deal with all cases of assault and harassment at our university. Rhodes management doesn’t care about rape culture. A perpetrator can be any race, any gender, any age.” We printed dozens of A4 copies.

That Sunday evening, we removed posters advertising beach parties from the library wall, replacing them with #Chapter212 posters. The next morning, all the posters had been removed by campus security. There was a rule that posters were not allowed on the wall. After we sought permission to keep the posters on display, students stopped by to speak to us about the campaign and, within hours, the posters had garnered attention on social platforms.

Although they did not talk to us directly, in an article about the campaign several members of staff, including the vice-chancellor and the university proctors, were pictured reading the posters. In a statement, the vice-chancellor, Sizwe Mabizela, said: “Students and staff with complaints of harassment, sexual assault and rape are encouraged to come forward and report their complaint[s] to the wellness manager.” He expressed support for our protest but it felt like empty diplomacy — there
was no response to the problems we had put forward. Later that week, the posters were removed again. We were left feeling exhausted and disheartened.

And then the pot boiled over. When #RUReferenceList happened, the university’s management was forced to acknowledge there was a problem. Within 24 hours, responding to student demands, the university had committed to increasing the capacity of the harassment office and to relying more on “external prosecutors” in sexual violence cases. It said it would improve staff sensitivity training and set up a task team to strengthen its response to sexual violence. The task team would later make more than 90 recommendations.

As students mobilised against rape culture during the #RUReferenceList protest, Rhodes acknowledged it was “a microcosm of [a] society in which sexual violence and rape are pervasive”. As Professor Pumla Gqola describes it, South Africa is a country in which women are “legislatively empowered, yet do not feel safe in our streets or in our homes”. Our society does not take sexual assault seriously until it makes headlines. Cultural attitudes that enable sexual violence to prevail go unquestioned. Men’s reputations are given more credence than women’s expressions of pain. Indeed, Rhodes is a microcosm of that society.

Much of the conflict around the protests, especially between university management and protesting students, revolves around one thorny matter: the credibility of the list. Mabizela described the reference list as “damaging” and “unconstitutional”. Despite this, students continued protesting, calling for the named men to be suspended. The university refused, saying it could not suspend them until they had been found guilty of misconduct.

In April 2017, when anti-rape protests threatened to resurface on campus, the university stated: “All cases emanating from a list of names which was published in 2016 … [have] been finalised.” Months later, Rhodes said that none of the men who had been removed from their residences after being named on the reference list had been found guilty of sexual misconduct, “even after thorough investigations by the university and the National Prosecuting Authority”.

In February this year, I sent Rhodes an email requesting clarity about the finalised cases. I asked them how many complaints had been received against the men, what the complaints were and what the outcomes of the investigations were. Rhodes acknow-ledged my email, saying it would get back to me. A few days later, when I sent a follow-up email, they said they would respond later that day but failed to do so. This week, I emailed Rhodes to ask for comment on the same matters. The university responded asking me which organisation I represent.

In an interview with SAfm in May, Rhodes’s communications director, Luzuko Jacobs, was quoted as saying that there were “no complaints”, nor were there any “complainants who came forward” to report any of the men named on the list.

#RUReferenceList could have been a moment when our university took a radical stance against sexual violence, as we did. Instead, it turned into #RhodesWar.

In 2017, Rhodes expelled two women involved in the #RUReferenceList protest for “criminal activity”. The student representative council described these expulsions as “inherently unfair”, saying they were “tantamount to the university absolving itself of its role in the panic and desperation” that led to the protests.

“If management had responded differently to the Chapter 2.12 campaign, we believe we would not be having this conversation,” the SRC said.

When news of the activists’ expulsion made headlines in December 2017, the university said the women’s participation in the #RUReferenceList protest “had nothing to do with the charges against them”. But it’s not easy for some of us to feel assured.

For many of us who remember what happened in 2016, it’s “safer” to stay silent. Since I graduated, I have heard accounts of alleged instances of sexual violence at Rhodes. Sporadic mobilisations and student body meetings have taken place. Despite this, none of the eruptions has escalated into a protest of the magnitude of #RUReferenceList, because students are afraid they could be individually punished for holding up a mirror to the institution.