‘Beaufort se baas’ is back, and is as controversial as ever

There’s a familiar face in the Beaufort West mayor’s office. Above the wood-grained desk, a Vincent van Goghesque painting has been returned to the wall and his “Vuna municipality of the year” awards are back on the shelf. But the mayor is not reclining in the luxury chair. It’s his deputy, the controversial Truman Prince.

“Sometimes you have to lead from the back,” Prince tells the Mail & Guardian on Tuesday, explaining why he’s in the mayor’s office while the actual mayor — Noel Constable — occupies the deputy mayor’s quarters in the building next door.

“People like to use this word, that I am controversial. But you know, controversial means most hated but also most loved,” he says.

Prince returned to the driver’s seat of the municipality through Constable, the leader of the Karoo Democratic Force (KDF), who was elected mayor after breaking his coalition agreement with the Democratic Alliance and joining forces with the ANC.

In the 2016 local government elections, the KDF secured one seat in the local council and the DA and ANC won six each, making the new party the kingmaker.

Constable sits in the much smaller deputy mayor’s office next door, preparing for a mayoral council meeting. “The meeting is meant to happen now but we can move it to 11.30am; I just have to check if it’s okay with Truman,” he says.

Truman is in between taking meetings with disgruntled residents, some of whom have come to query municipal accounts.

“If your door isn’t being trampled down, there is dysfunctionality in your office,” Prince explains with gusto, flattered by the hope residents have in his return to office and the number of people who visit him daily.

“It’s really a relief that he’s back,” says one Mandlenkosi township resident seeking work. “When he was voted out, the DA people would come here and say we are embarrassing the DA by sitting outside the offices all day, asking for stuff.”

Prince holds a master’s degree in public administration from the University of the Western Cape and was “born and bred” in Beaufort West. He describes himself as a grass-roots activist, connected to the most underprivileged communities. 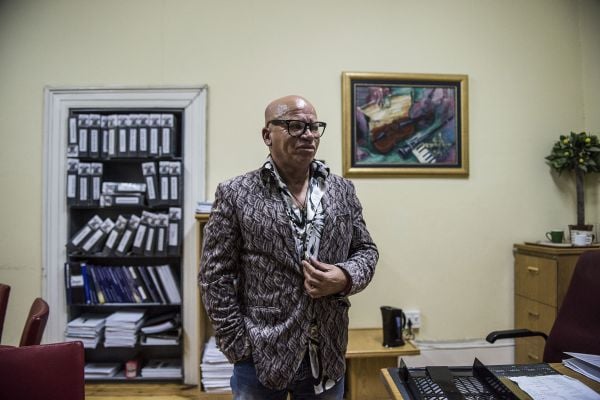 Deputy mayor Truman Prince in characteristic flashy attire and mayor Noel Constable (below). The pair now occupy the town’s highest office after the Karoo Democratic Force threw in its lot with the ANC, but not all the townsfolk are convinced that change is coming. (David Harrison/M&G) 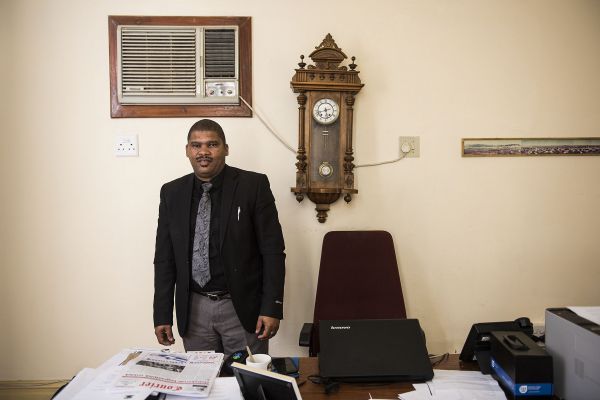 When there’s a funeral, he pitches up in his silver Mercedes-Benz to grieve with the family, says Oortman Okkers (55), a lifelong resident of Beaufort West.

“He is one person who will never turn you away from his door. He got my son a job, and sometimes when we don’t have electricity or food we say: ‘Meneer, come and look at our food cupboards; they are empty.’ Then he will come with food hampers,” Okkers says.

Although Prince styles himself as the people’s mayor — with his designer clothes, Italian leather shoes and a chicken-foot necklace around his neck — his chequered track record still haunts his tenure in government.

Before the 2016 local elections, he was reprimanded by the ANC for writing a letter to the council, asking that a construction tender be awarded to a company sympathetic to the governing party.

After the polls, Prince literally shed tears: the results showed that the ANC would lose power to a coalition formed by the DA and the KDF.

Entering the ranks of the opposition meant Prince would lose his mayor’s salary. A few months later, he also lost his position on the South African Football Association’s executive and its generous salary.

Since returning to power after ousting DA mayor Japie van der Linde during a council meeting in February, Prince has again raised suspicions because of his management of municipal finances and a dubious toilet construction deal. 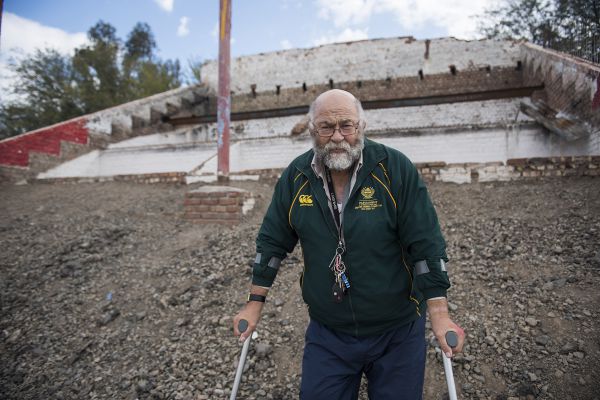 The DA’s Japie van der Linde was ousted as mayor earlier this year and then reinstated by the courts, before being voted out in a motion of no confidence last week. (David Harrison/M&G)

A R1.9-million contract started in February to build 21 toilets connected to old council houses, most of which have an outside toilet in the corner of the yard, is the latest scandal hanging over his head.

Constable admits the municipality spent all the money but not a single toilet has been finished. Instead, workers built two walls and installed the toilet pot, then dug a trench to lay piping towards the sewage point at the outside toilet — and left.

The piping was never connected, the trenches were left open and the toilet doors were never installed, rendering the lavatories useless.

“I had to fill up this deep hole they just left in the back yard because it’s dangerous for the old people and kids,” beneficiary Alfred Louw explains outside his two-bedroom council house in Rusdene, opposite the Beaufort West football stadium.

“They would start building a little bit here, then go next door to build a little bit, then come back and continue. Then in January, they left it like this. But if there’s just a hole in the fence of the stadium, it gets fixed now-now,” Louw says.

Constable says the council budgeted R8-million for the project and intended to build 80 toilets costing about R30 000 each. The high cost is owed to a “labour-intensive approach”.

“We said we could give the project to a big contractor to bring in machines and do it quickly, but our intention was to create jobs. So when you create jobs, you have to go with the labour-intensive approach. That’s why we are still waiting for the rest of the R8-million and that project will be completed,” he said.

Then there’s the municipal accounts. When Van der Linde was ousted, he is said to have left the municipality with R2-million in its current account. In the five months since Prince and Constable have been in charge, the account has sunk into a R7-million overdraft, and Eskom and South African Revenue Service bills have not been settled.

“The reason we are sitting with this problem … You see, Japie is a bit confused … He continued with a tender without having a letter of assurance from national treasury that they can roll over the money, and that put us in a very awkward financial position,” Prince says.

Some Beaufort West folk seem unfazed by the controversy that swirls around the town’s “humble servant”. John Jacobs (54) says: “He’s the best we have, really. He is someone who looks out for the poor people and someone we can depend on.”

Other residents, however, are not fooled by Prince’s charms. The town’s informal settlements have doubled in size over the past 10 years, residents say, and Prince has done very little to alleviate their suffering.

The N1 highway cuts through the town’s business district, bypassing B&Bs, colonial-era churches and the popular Chris Barnard Museum, and is usually packed with trucks and taxis making their final stopover before heading to Cape Town.

In Mandlenkosi, the worn-out streets are littered with rubbish and turn into dusty gravel roads passing by the asbestos council houses, where children compete with cattle and goat herders for space on the open fields to play football. Unemployed men and women sit in their front yards while others loiter in front of spaza shops owned by foreign nationals.

Beaufort West has an unemployment rate of more than 60%, according to the latest figures from Statistics South Africa (2017). Many believe Prince has failed to deliver on his promises to bring about change.

“We need to put food on the table and get jobs — we are not here to take pictures!” a young man in a KDF T-shirt exclaims angrily as Constable emerges from his office.

He is part of a large group of people who came to the office to inquire about when the toilet project, on which they earned R2 200 a month as temporary workers, would resume.

“At the end of the day, he is just a politician. If you’re not his supporter, he won’t help you. And most people here don’t like to kiss people’s asses. We are really struggling,” says resident Angie Stuurman, who hopes to get her first job in two years.

Prince supporters call him “Beaufort se baas” — someone who can tend to their immediate needs, usually by channelling government money into football projects.

“I’m a soccer lover and I started football in the area … If our sports structures are functional, then it will get the youngsters away from crime and drugs,” Prince says.

Prince is not shy about Beaufort West’s heavy investment in football. The Fifa stadium cost R30‑million to build — R6.3-million was spent on astroturf alone — and this was money well spent, according to him. A former local football star, Prince now owns and partially manages the Beaufort West City football club.

But if Van der Linde and his DA colleagues have their way, Prince’s return to the deputy mayorship will be short-lived. Among the strategies being considered to remove him from office is a case opened against Prince for allegedly stealing water from the drought-stricken town.

Last week, the DA went to the local police station to charge Prince with illegally bypassing the water meter at his house by connecting a separate pipe. Prince easily dismisses these allegations: “No, that’s rubbish.”

After his interview with the M&G, there’s a large group of people still waiting outside to see him. Prince speeds past them on his way to the mayoral committee meeting, infuriating them even more.