For a long time it has been considered improper, at least in critical circles, to hold the belief that a photograph could have universal interest. This is owed in part to the power of postmodern theories of photography — most famously, those of Susan Sontag and John Berger — that told us respectively that all photographs amount to aggressive appropriations and that a photograph without narrative context is a semiotic and political problem.

That is why a small shock rippled through the room when Johannesburg Art Gallery (JAG) chief curator Khwezi Gule, at a recent press briefing, described Wolfgang Tillmans’s survey exhibition Fragile as “universally” relatable. Gule was not only suggesting that the exhibition refers to some issues that are genuinely of broad concern (desire, death, fear, food, fun) but also that it does not take for granted the positions and tastes of its audience.

Fragile opened on a Sunday afternoon to a fairly small crowd, who stood in some light rain through four speeches before being allowed into the exhibition. In spite of its persistent tribulations, the JAG takes its wins seriously.

Fragile is a touring exhibition conceived specifically to travel to Africa, where the German-born Tillmans had never previously shown his work presented by Institut für Auslandsbeziehungen (ifa) in collaboration with Wolfgang Tillmans and the Goethe-Institut, the exhibition has been shown in Nairobi and Kinshasa. Earlier this year it appeared in Nairobi and Kinshasa. But the decision to head southwards is just about where the conception of the exhibition’s “Africanness” ends. There are no curatorial attempts to mediate or explain the work to a far-off audience or one that craves so-called relevance. And, in fact, Gule’s invocation of universality was a gentle pre-emptive rebuttal of the idea that relevance is a relevant evaluative category at all.

Tillmans insisted that the works he would send to Africa were not “exhibition copies” or robust travel versions of the originals. They are the very same ones that only a year ago hung in the Tate Modern in London.

Why is this relevant? The JAG’s museum climate control system is about as reliable as the climate itself, and this has scared countless artists and museums out of loans to the embattled institution. But, as Tillmans demonstrates, if one is serious about the politics of more equitable access to culture, one actually has to distribute culture without prejudice, even if this involves risk.

This is an example of the quiet, committed activism of Tillmans, which manifests in what he does, rather than in provocations. The first time he came to South Africa, in 2008, was in support of the Treatment Action Campaign’s lobby for access to free antiretroviral drugs for people with HIV. Tillmans himself lives with HIV and tragically lost a belatedly diagnosed partner to Aids in 1997. 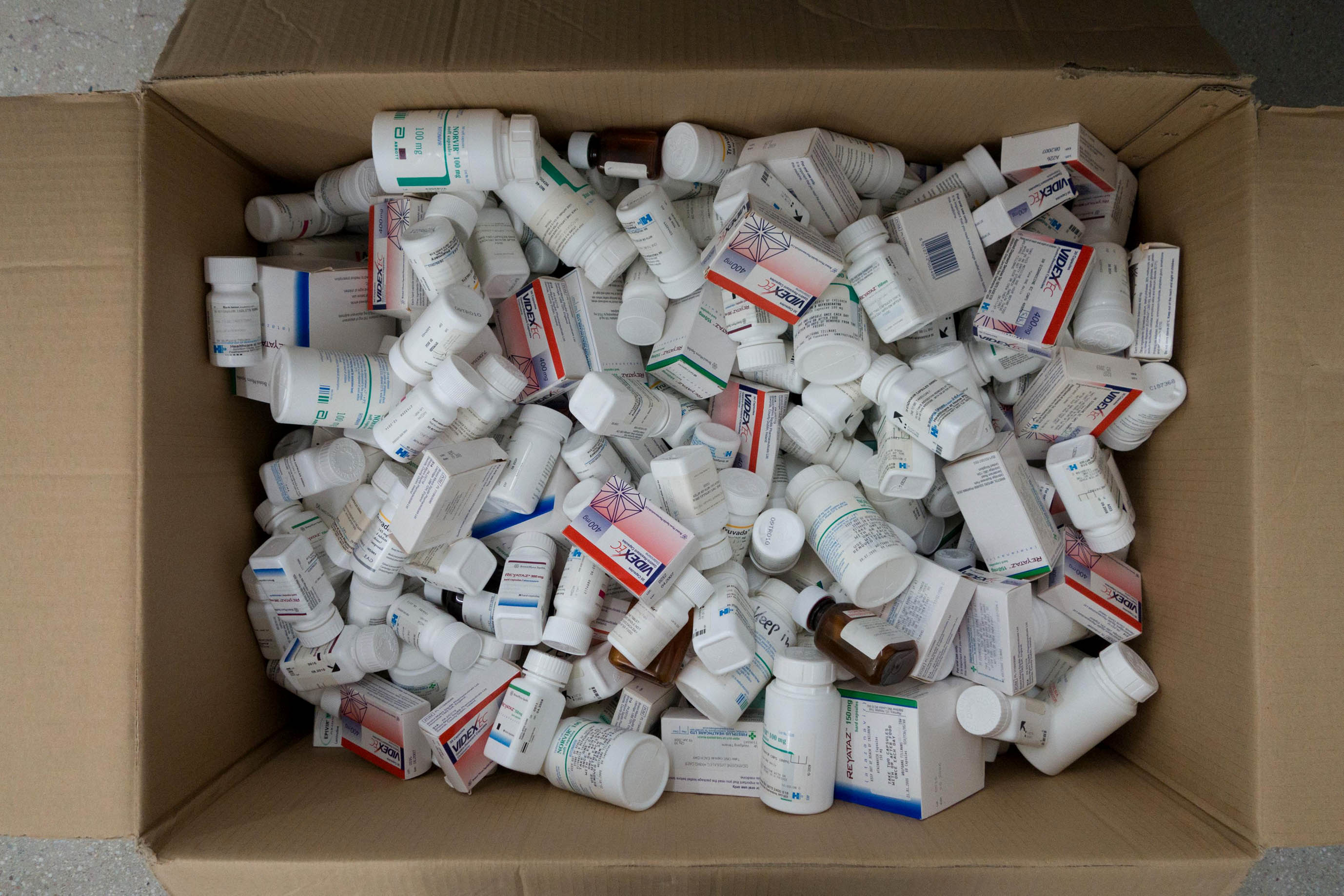 [In his exhibition, photographer Wolfgang Tillmans juxtaposes the everyday relic of his antiretroviral medication in ’17 Years’ Supply’ (above) with the striking scene captured in Italian Coastal Guard Flying Rescue Mission off Lampedusa (below)] 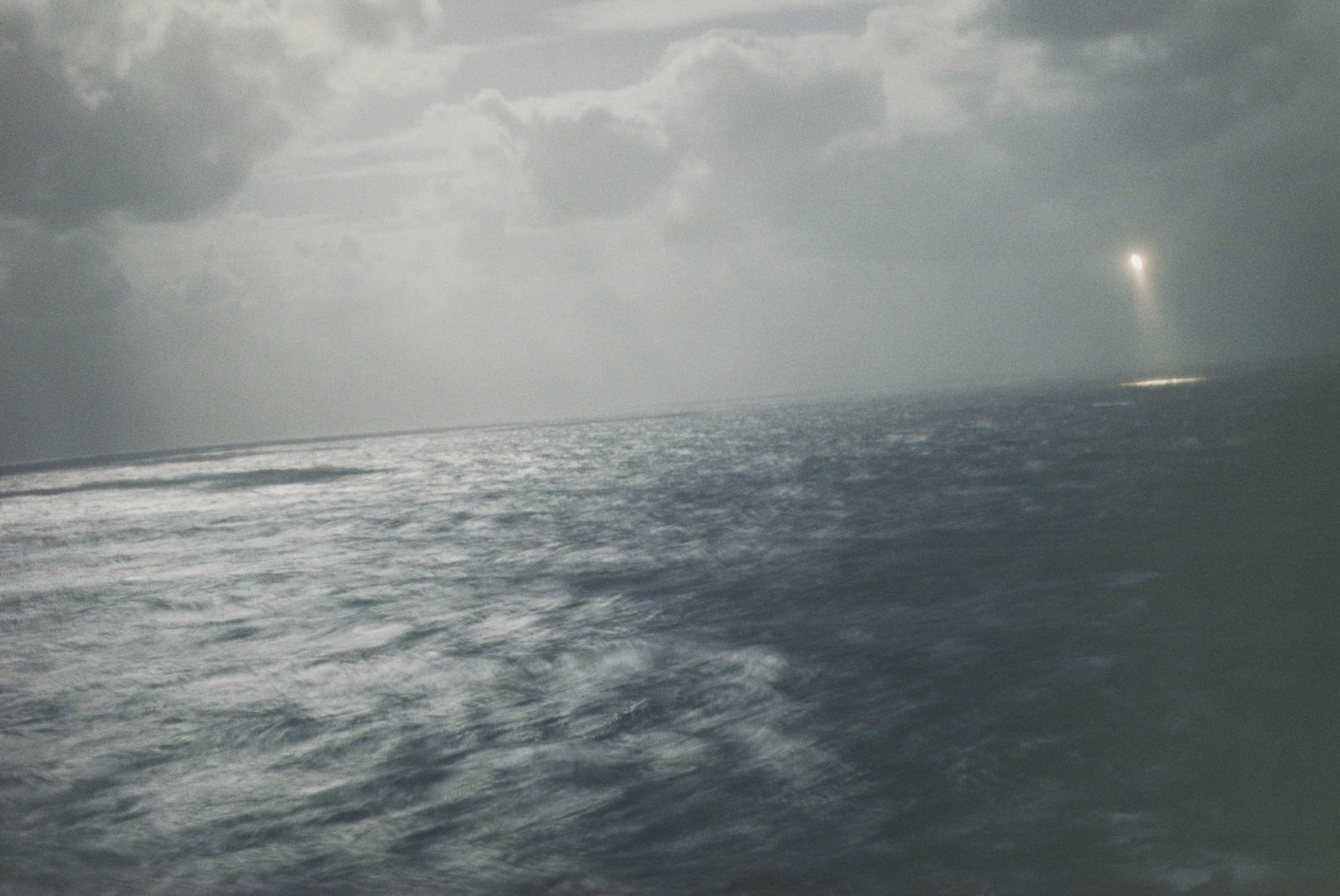 These anecdotes glance out of his work, if you look for them. A picture titled 17 Years’ Supply (2014) allows us to peer into an open cardboard box full of old containers of Tillmans’s own antiretroviral medication. You have to examine the image very closely to pick this up, but it is there for anyone to see. His departed partner, artist Jochen Klein, appears in the promotional image for the exhibition, titled Deer Hirsch (1995), in which he shows his empty hands to a deer with which he had moments earlier shared his food. 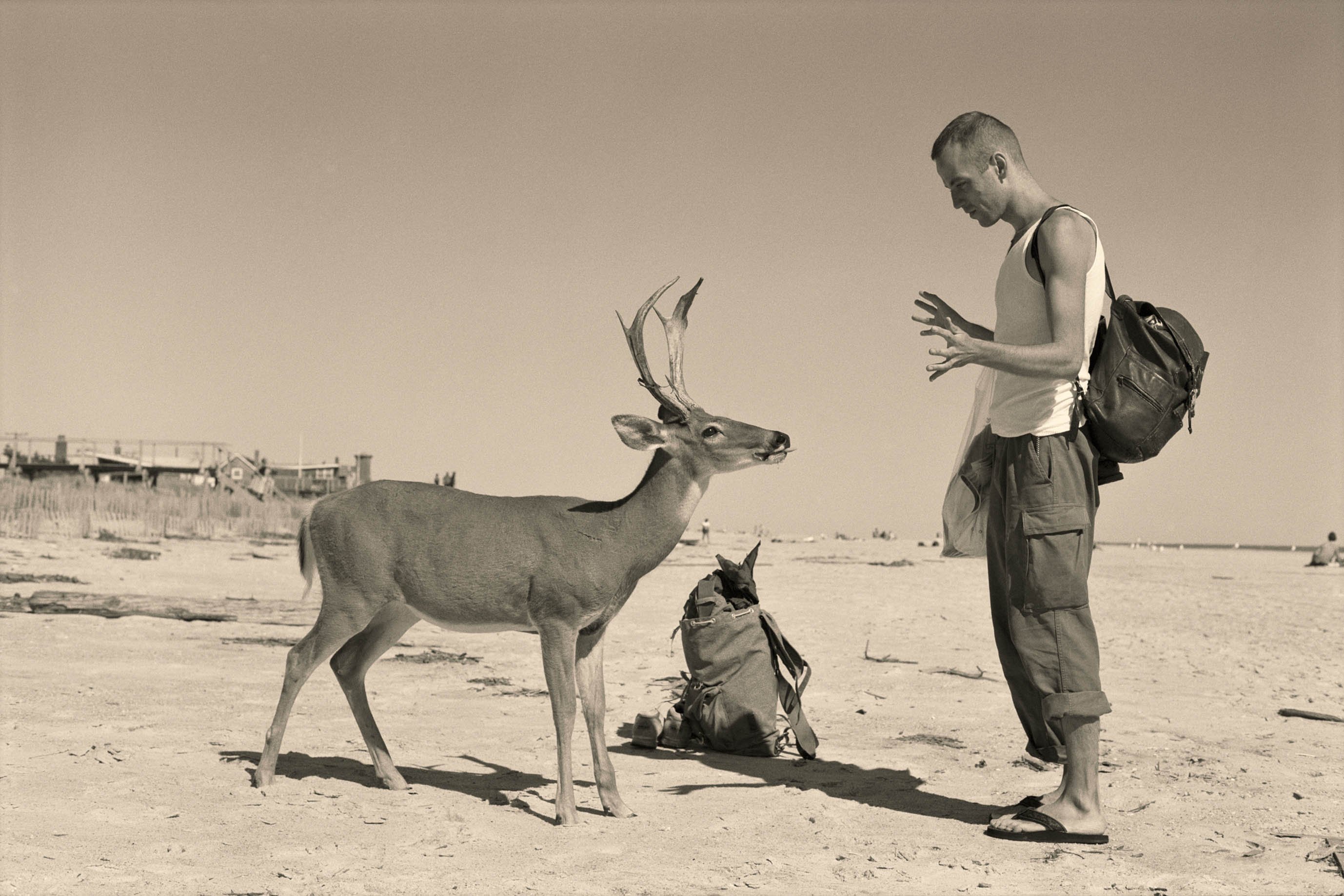 [Show of love: In the photograph titled ‘Deer Hirsch’, Jochen Klein — Tillmans’s departed partner — shows his empty hands to a deer with which he had moments earlier shared his food]

Tillmans makes himself vulnerable to us in this way, at the same time as his subjects demonstrate vulnerability to him. He entered the public eye in the late 1980s and 1990s as a chronicler of the club scenes in London and Hamburg, and several works in Fragile give glimpses into this world. 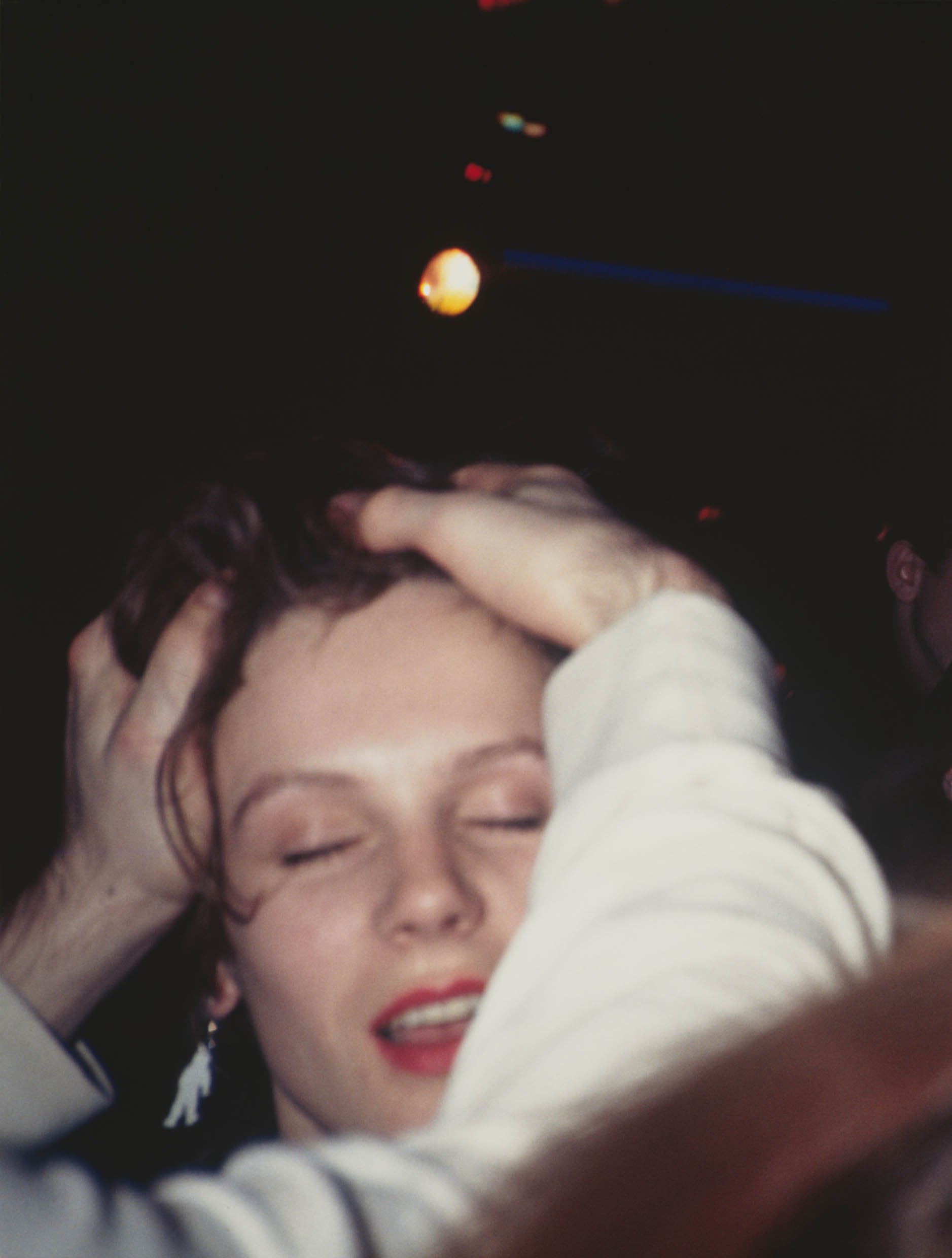 However, Tillmans was no documentarian — he was as embedded in the scene as the sweating, smiling subjects in the sequence Chemistry Squares (1992), which hugs the curve of one of the JAG’s alcove spaces. The smiles of friends or potential friends are intoxicated and unaffected, even innocent. Ecstasy had just exploded as a party drug in Europe, the Cold War was over and the internet was in its infancy. The future seemed as wide open as a raver’s pupils.

Tillmans speaks about nightlife as an area of culture essential to freedom, as a collection of self-regulating communities that don’t ask for permission to exist. He supports this culture by enjoying it, but also by providing some of its infrastructure. Tillmans runs an experimental exhibition space in Berlin called Between Two Bridges, and the parties he hosts in his studio are legendary. Before finding his way into photography, he experimented as a musician and DJ, and is still actively involved in the electronic music scene in Europe. His latest release, Hamburg/Süd (2017), is a 20-track album of atmospheric noise, vertiginous vocal effects and occasional beats. Incidentally, Fragile is also the moniker he uses for his music project.

Tillmans’s immersion in the worlds of his photographs is what has led some critics to dismiss them as snapshots. But his complicity in everything he photographs is the means by which the work operates politically. Although he has no autobiographical objectives, he photographs what he knows, and that ranges from protests to intimate moments with loved ones.

Everyone’s life looks a bit like this: a combination of the mundane, the romantic and the epic. His refusal to pay less attention to a pair of jeans than to, say, Isa Genzken — a prominent artist with whom he has collaborated in the past, and whose portrait hangs in the JAG — is his way of practising a principle that is also the title of an earlier installation not included in this show: If One Thing Matters, Everything Matters.

About the jeans: one of a few refrains in this exhibition is clothing: in piles, on people, submerged in water. Tillmans explains that an epiphany arrived one day in 1991, while he was hanging his laundry out to dry. A pair of grey jeans he had draped over a stair post, he realised, was a sculpture. But not one that could last three-dimensionally, because the jeans would need to be worn again soon. He photographed them and thus was created Grey Jeans over Stair Post. He had discovered, he explains, “that photography is the best way of dealing with sculptural problems”.

Tillmans’s sculptural thinking is clear in the Paper Drop series, a group of side-on images from the mid-2000s depicting photographic paper gently folded over itself to create a loop or teardrop shape. In these pieces, we see Tillmans treating paper sculpturally, as a material with its own surface properties and its own ways of behaving in space. In a talk at the Wits Institute for Social and Economic Research prior to the opening of Fragile, Tillmans reminded the audience that a photograph — particularly an emulsion-based one — is also a hydrograph, a record of contact between the paper and water. It is not just a place where something else is represented; a photograph is also itself. 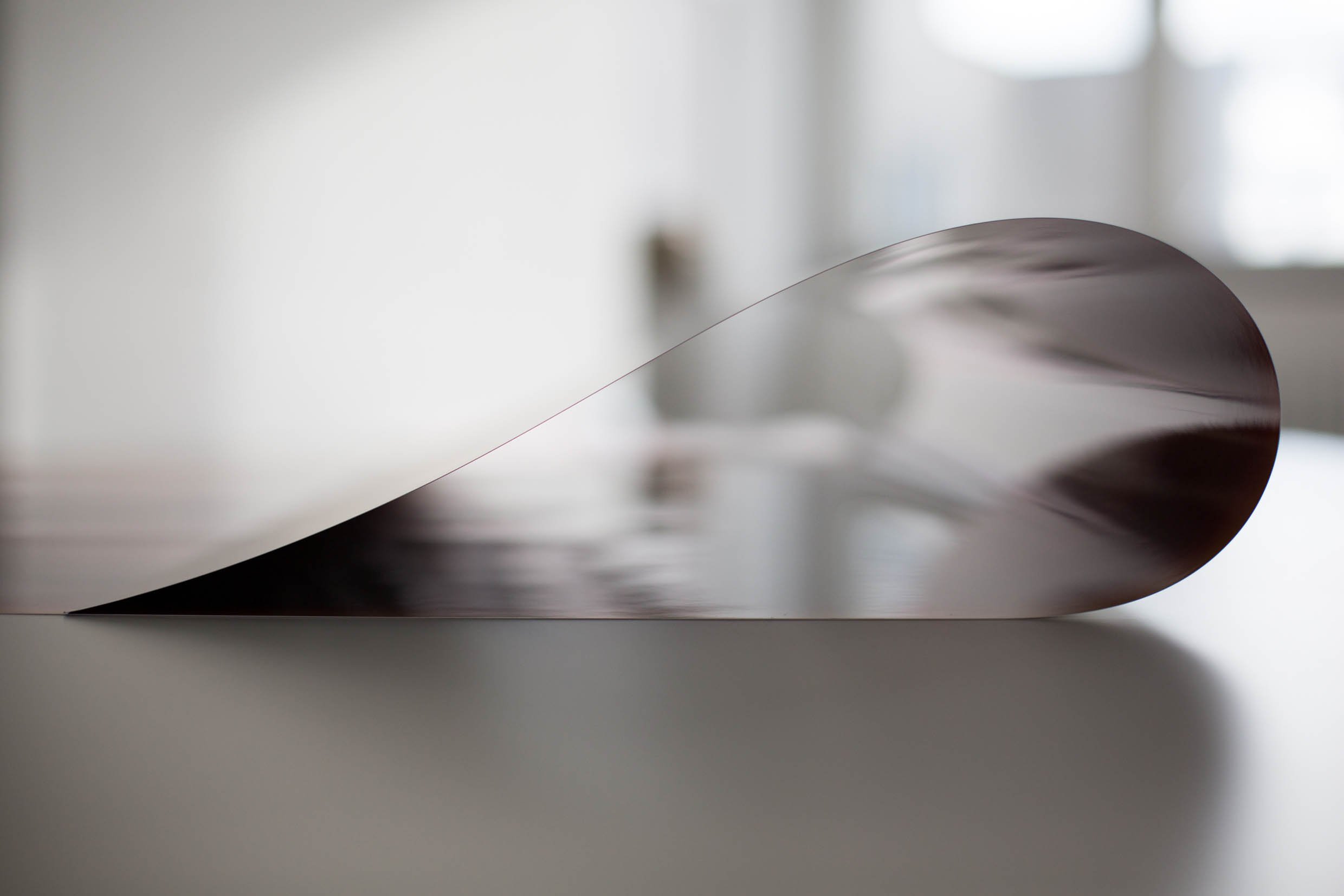 [Shades of grey: In the ‘Paper Drop’ series, Tillmans captures photographic paper folded over itself to create teardrop shapes]

This sounds a lot like flatness-lite, a derivation of Clement Greenberg’s influential claim, in the mid-20th century, that abstract painting was about two-dimensional literalism rather than the representation of three dimensions.

Yes, Greenberg lurks; Guardian writer Jonathan Jones once called him “the art critic who refuses to flatline”. But Tillmans’s literalism is, importantly, another example of politics in practice. He reminds us that sometimes a photograph simply doesn’t say anything at all. In South Africa this is especially relevant because of the historical role photography has played as a socially engaged art form. Apartheid-era documentary photography was the rest of the world’s proof of what was really going on here.

This is the paradox of photography, that it can say everything and nothing at once — that it always, in some respect, tells the truth and yet it is not to be trusted. The gratification in Fragile is that Tillmans allows this paradox to gape open while he flirts with staged portraiture, reportage, abstract formalism and personal commemoration all at once. And he invites us to look with the same freedom.

Fragile runs at the JAG until September 30. Entrance is free