Harare — A crackdown is underway in Zimbabwe, and few are talking about it. The violence and intimidation began just after the military fired live rounds in Harare on August  1, causing seven deaths, after the July  30 elections. 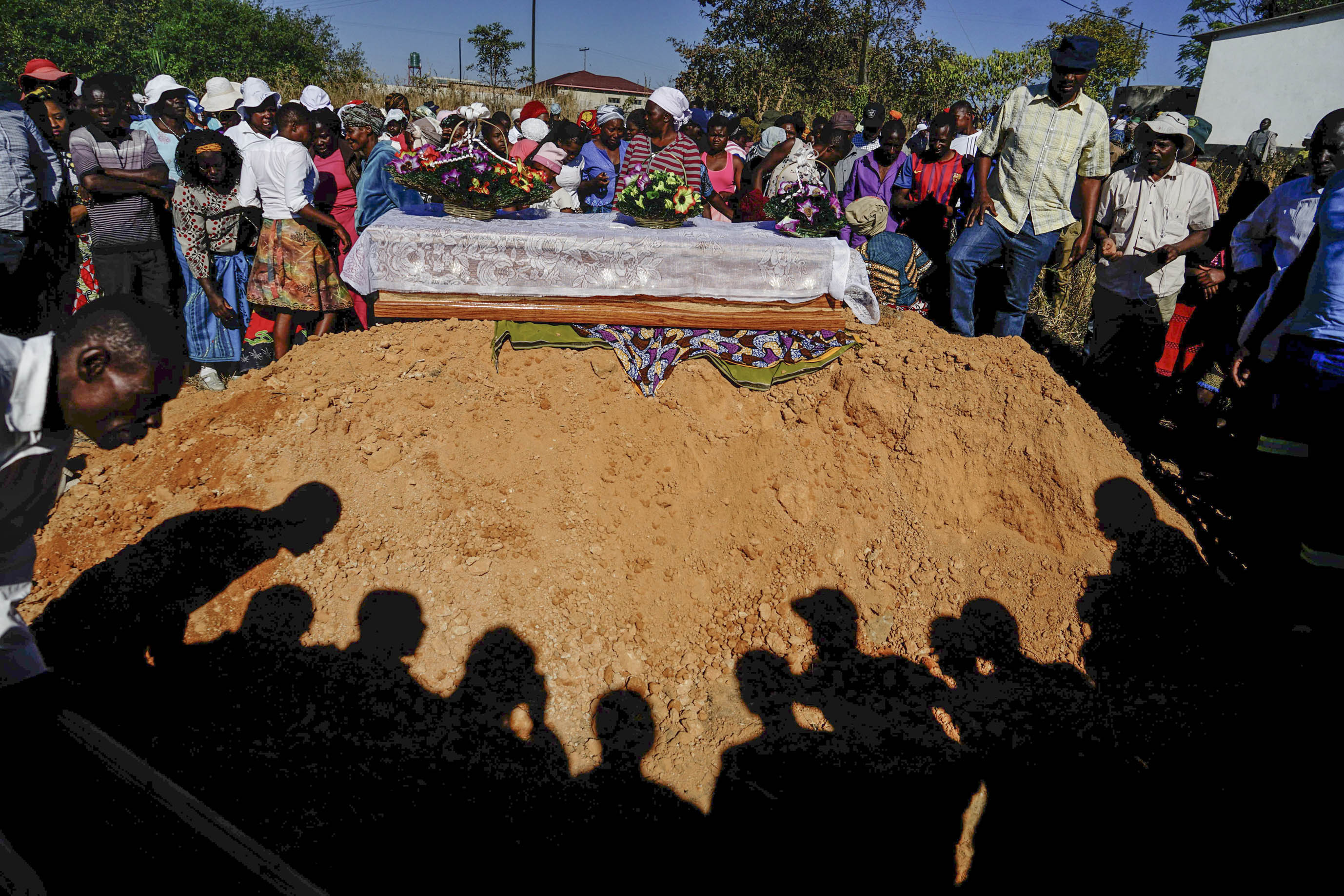 [Mourners gather around the coffin of Ishmael Kumire, 42, one of seven people killed in the city. (Zinyange Auntony/AFP)]

On Tuesday, citizens at the Heal Zimbabwe Trust came under attack. The night before that, the activists of the Citizens Manifesto.

Many people have fled, many more have stopped sleeping at home. Former finance minister Tendai Biti narrowly escaped to Zambia after a warrant was apparently issued for his arrest. But he was deported on Thursday despite a Zambian court ruling that he could seek asylum in the country.

Organisations and newspapers, among them Human Rights Watch, Amnesty International and Heal Zimbabwe, The Guardian, the BBC and Associated Press, report that citizens are being rounded up in high-density areas and beaten for allegedly having supported the opposition. Soldiers demand the names and addresses of opposition activists and supporters before raiding their homes and terrifying their families. There have also been reports of polling agents being visited in the night. Some activists were abducted and beaten for hours before being released.

Civic organisations have noted dozens of injuries including broken arms and legs.

The campaign We the People of Zimbabwe, which has been covering the pre- and post-electoral period, said the human rights abuses that have been reported to it have included torture, rape, sexual torture, abduction, shootings and assault.The majority of the perpetrators identified have been soldiers. Though most of the reports suggests this is occurring in urban areas, the evidence is mounting about retribution in Zimbabwe’s rural heartlands.

It is widely believed that the crackdown is a response to Zanu-PF’s narrow win; President Emmerson Mnangagwa was declared the winner with just 50.8% of the vote.

Although the margin between Mnangagwa and Nelson Chamisa was more than 200 000 votes, Mnangagwa made it over the country’s 50% electoral threshold by just 39 000 votes, narrowly avoiding a run-off.

The opposition believes the crackdown is both a warning to the population and an attempt to disorganise the opposition’s petition process, which needs to be filed by Friday morning.

A misinformation campaign appears to be underway.

The foreign affairs minister and former army lieutenant general, SB Moyo, tried to disassociate the army from the campaign of terror being waged in urban areas, calling the reports “false”.

Citizens and civic groups have stated that they have evidence that the military is involved but no one can confirm which soldiers are on the streets or who is giving them orders, according to a report by the Centre for Strategic and International Studies.

It is hard to understand why an administration that has worked so hard to legitimise itself in the eyes of the international community might take to such brazen methods. This has led to speculation about who else could be behind the attacks.

On social media, people have intimated that the crackdown is being perpetrated by members of former president Robert Mugabe’s vanquished faction in the military and the ruling party; that they seek to de legitimise the new government by carrying out their own campaign of violence against the opposition.

But, if this is the case, why have the army or the police done nothing to stop the abuse? And in the wake of mounting evidence of abuse and torture, why has no investigation been launched?

At best, this suggests that the military and the president are unable to ensure peace and security for the country’s citizens;at worst, it suggests that this campaign is centrally organised or at least sanctioned.

Although no evidence has yet been presented of systematic fraud in the results announced on August 3, a close analysis of the results has found some concerning anomalies. First, 11 polling stations reported a more than 100% turnout, which should not be possible. This suggests ballot stuffing.

It also appears that across several constituencies, the tallies for the presidential vote were much higher than the parliamentary ballot. In just one constituency, there appears to be a discrepancy of more than 18 000 votes. This implies that either the presidential figures were inflated or that thousands of people walked out of the polling station without casting a vote for their MP. The latter seems unlikely.

The opposition Movement for Democratic Change (MDC) Alliance has claimed it has evidence of systematic fraud, and that this evidence will be presented in a petition to be heard within two weeks. It isn’t clear whether the MDC does have the necessary proof to make their claims. But the clampdown has probably hampered their ability to muster what evidence they do have.

The violence additionally appears to imply that the state is nervous about the petition, and it gives more credibility to the opposition’s claims of manipulation.

The South African government, through the department of international relations and co-operation, is yet to make a statement about the intimidation and human rights violations that have sent many opposition activists fleeing to neighbouring countries.

The day after the elections, the opposition cried foul, observer groups noted grave concerns with the process and MDC Alliance candidate Chamisa vowed to contest the results in court, but President Cyril Ramaphosa released a statement congratulating Zimbabwe’s newly elected president as soon as the results were announced.

Nothing has been said about the continuing human rights abuses underway in South Africa’s northern neighbour.

Local and international nongovernmental organisations have raised their voices in concern about the abuse being meted out against the opposition and civil society.

Preliminary observation reports released after the polls by international observers such as the National Democratic Institute, the International Republican Institute and the European Union refused to endorse the election as “free and fair”; they noted instances of intimidation and vote-buying, and that the playing field had been heavily skewed in the ruling party’s favour.

On August 7, almost a week after the crackdown began, the Australian embassy and the EU delegation (along with the missions of Canada, Switzerland and the United States) gave statements that condemned the post-election violence. But the EU statement has been criticised for not focusing adequately on the abuses still being committed by soldiers against civilians. It fails to denounce the excessive use of force by the military on and since August 1.

It has been suggested that the statement was watered down because of the influence of the British ambassador, who some believe to be backing Mnangagwa. This has been denied by the EU ambassador. Finally on August 7, Mnangagwa and Chamisa received calls from the UN secretary general, highlighting his concerns about the situation in the country. But will these calls or statements have the intended effect of demobilising the forces terrorising Zimbabweans?

In light of the deterioration of security for Zimbabwe’s citizens, it is imperative that the international community takes a stronger stance to protect Zimbabweans from human rights abuses. The South African government should play a leading role in pushing the government in Harare to be accountable to its citizens, and to allow the MDC’s petition to be investigated and aired freely in court.

Anything less is surely dereliction of duty.