Five months into her tenure as the minister of social development, Susan Shabangu is allegedly repeating her predecessor’s controversial moves at the embattled South African Social Security Agency (Sassa).

In 2016, Bathabile Dlamini appointed workstreams to formulate a system so that Sassa could take over the administration of social grants. But these teams duplicated most of the work being done by the agency’s employees and cost the taxpayer R47-million. The treasury found the appointment of the work- streams to be invalid.

“This one [Shabangu], without any process as well, is claiming that Sassa is dysfunctional so that she can justify her technical committee,” said a well-placed official at the social development department. “Had she or her advisers read the directions of the [Constitutional] Court of 7 November 2017, she would have let the department of planning, monitoring and evaluation assess the competencies at Sassa.”

Agency officials say Shabangu’s technical committee is surplus to the agency’s needs because it is replicating existing processes.

When asked about the technical committee she appointed in May, Shabangu’s answers have followed a similar line to those of Dlamini.

In March, the department was ordered by the Constitutional Court to submit monthly reports to it on progress with Sassa matters.

In May, Shabangu reported to the Constitutional Court that she had seen a need to establish a technical committee. She justified its appointment by saying that a number of payment models developed at Sassa were neither fully examined nor implemented.

“Sassa has, over the last few years, been working on a plan to gear itself to take over the payment of social grants from CPS [Cash Paymaster Services]. Various projects aimed at developing a payment model and related system were undertaken by the Council for Scientific Research, [the] ministerial advisory committee and subsequently the work- streams,” reads the report.

“There exists a need to consolidate, analyse and evaluate all the reports produced by the different entities and to make recommendations. The committee will also assist Sassa with the implementation of alternatives to cash payment services and implementing the migration strategy.”

The senior official at the department gave as an example of the committee duplicating the agency’s work the migration from the old CPS card to the new Sassa card being issued by the South Africa Post office (Sapo).

“This is work that is being done by Sassa and Sapo while she says her committee would be focusing on it. The post office has also taken over the responsibility for the payment of cash beneficiaries and are currently piloting their cash payment solution,” said the source.

This was confirmed by another source from Sassa, who added that numerous committees were assisting the agency and Sapo, including the inter-ministerial committee and the panel of experts set up by the Constitutional Court, which includes the auditor general and the court itself, to ensure a smooth transition from CPS.

But in the Constitutional Court report Shabangu states that the appointment was made in line with regulation 20 of the treasury regulations in the Public Finance Act.

The section specifically and only refers to the appointment of commissions and committees of inquiry, which this new outfit at Sassa evidently is not. 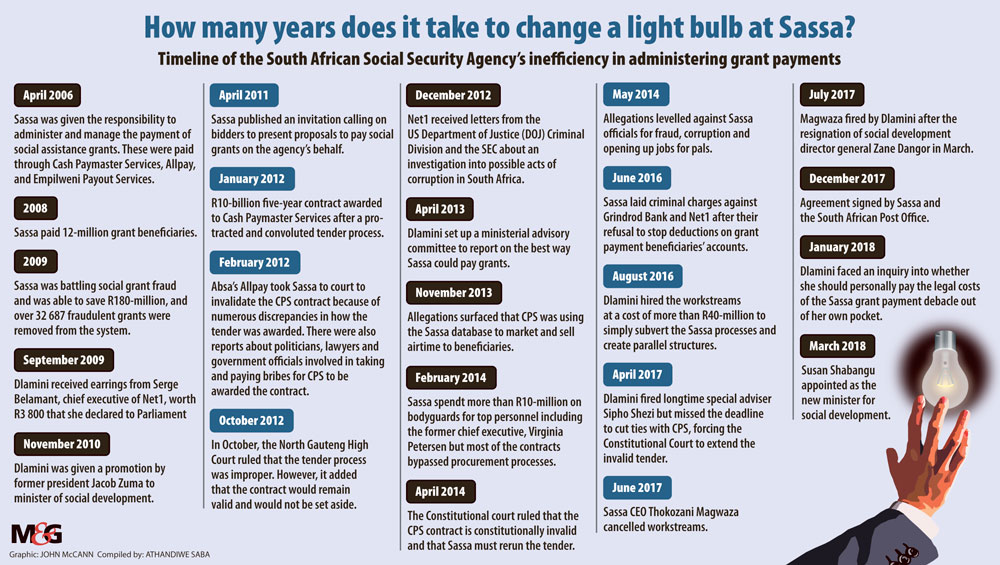 Mashupye Maserumule, professor of public affairs at the Tshwane University of Technology, said he thinks that Shabangu has misinterpreted treasury regulations.

“It creates an impression that she is appointing a committee that will investigate another aspect. But here it’s not a point of investigation but more an issue of a transition from CPS to Sapo. So the current administrative capacity within Sassa should be able to attend to that. I don’t think it needs another committee to attend to it,” he said.

The social development department official said that the presence of Shabangu’s committee added more reporting levels and forums, which are costly.

Maserumule said the terms set by the Constitutional Court were clear and, even though Shabangu has made great strides in stabilising the agency, he doesn’t understand why she is creating unnecessary structures.

Shabangu’s spokesperson, Thuli Nhlapho, did not respond to inquiries from the Mail & Guardian.